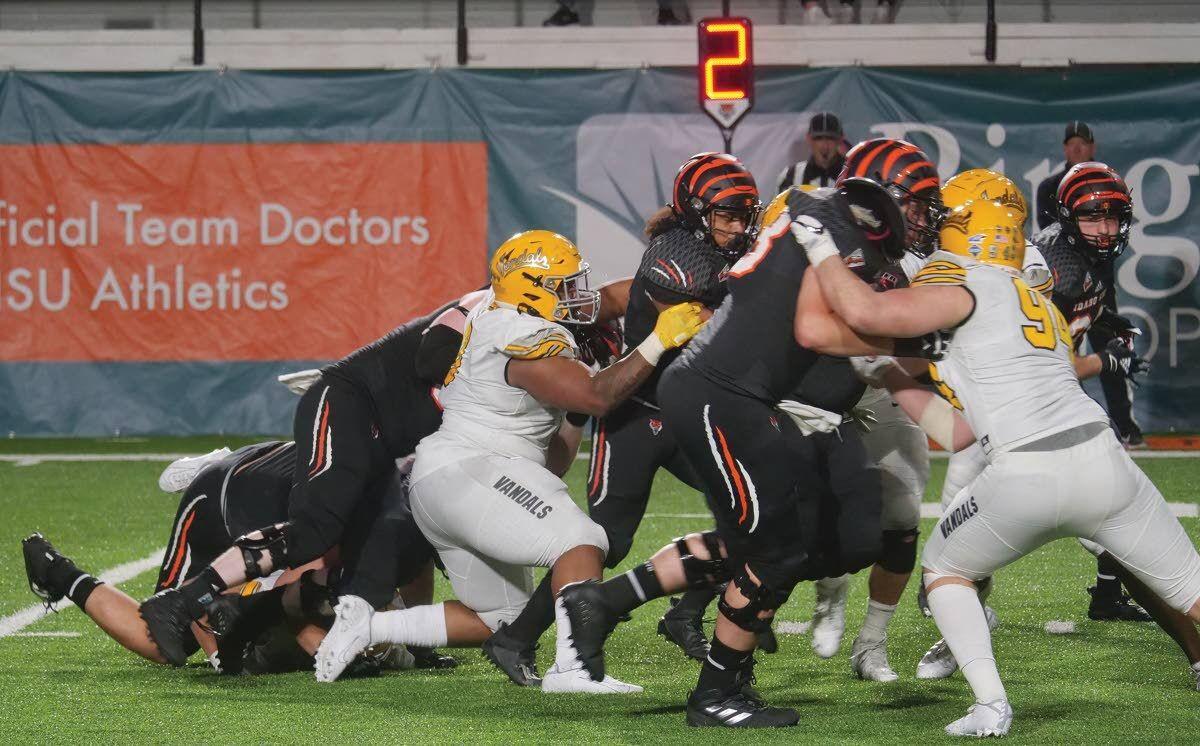 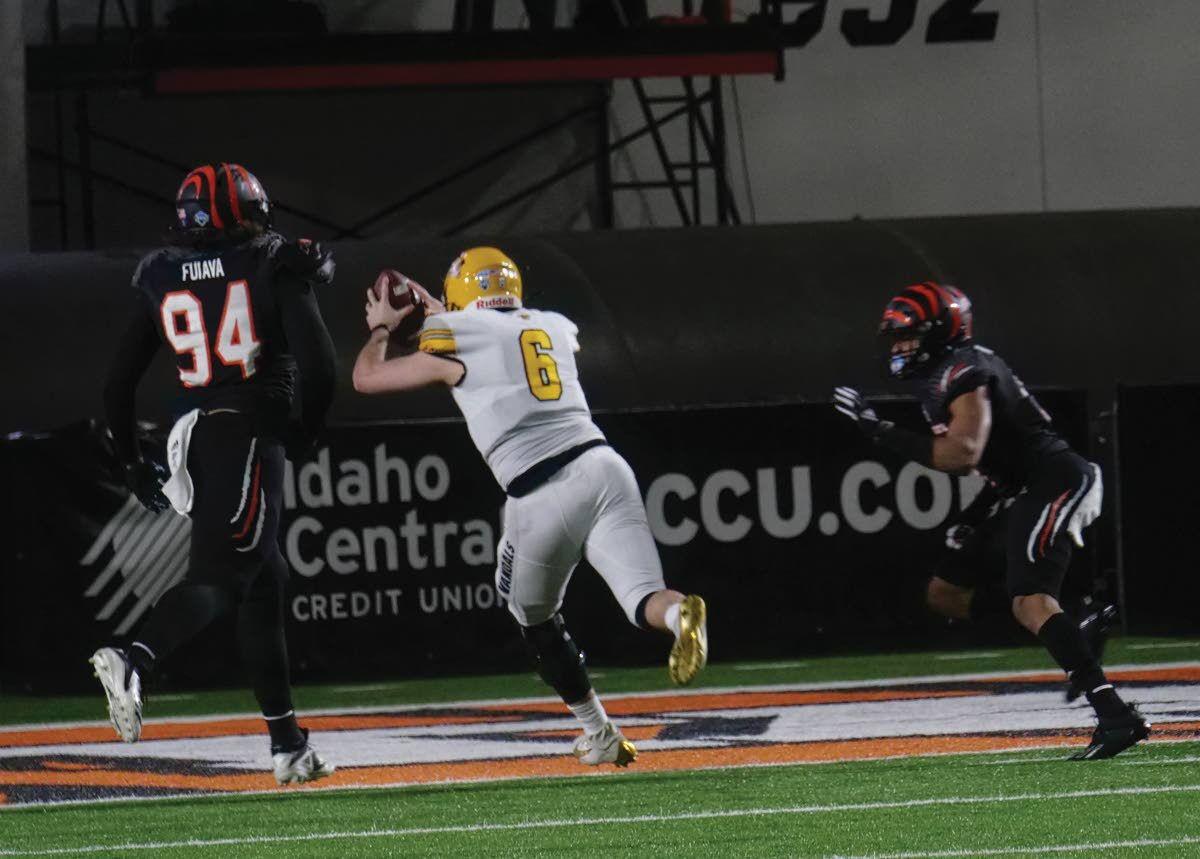 Idaho quarterback Nikhil Nayar dives into the end zone for a touchdown in the third quarter of Saturday's Big Sky game at Idaho State. Nayar ran for 23 yards and threw for 130 in the Vandals' loss against the Bengals.

Idaho quarterback Nikhil Nayar dives into the end zone for a touchdown in the third quarter of Saturday's Big Sky game at Idaho State. Nayar ran for 23 yards and threw for 130 in the Vandals' loss against the Bengals.

For the second week in a row, third-string University of Idaho quarterback Nikhil Nayar had the outcome on his shoulders late, with another potential game-winning series in his sights.

But the Vandals’ in-state Big Sky Conference rivals weren’t about to fall victim to any more comeback magic in crunch time, especially from a backup-led UI attack that’d looked less than stellar.

The Vandals’ offense toiled through a messy outing Saturday against Idaho State at Holt Arena in Pocatello, and couldn’t muster the firepower for a second consecutive last-minute victory.

The No. 24 Vandals were knocked out of postseason contention with a 24-22 loss.

ISU had been stunned on final drives in two of its three defeats. The Vandals topped Eastern Washington in Week 1 on their last possession, and nipped Southern Utah 33-32 last weekend when Nayar delivered a touchdown to Cutrell Haywood with seven seconds left.

“We had a chance to win it right at the end, just like we have twice this year,” coach Paul Petrino said postgame on a UI radio program. “All we needed was a field goal, but that penalty was huge. It really killed us.”

Standout receiver Hayden Hatten was tagged with a pass interference on Idaho’s first play of the series, which began on the Vandal 43-yard line with 1:50 to play.

The foul proved crippling for Idaho’s offense, which was shaky throughout. A fourth-and-10 throw from Nayar into traffic fell incomplete.

The Bengals (2-3) knelt it out, then stormed midfield to celebrate with the traveling "Battle of the Domes" trophy that they have now twice claimed since their Gem State foes rejoined the Big Sky in 2018.

“If we don’t go to the playoffs, nobody from the state of Idaho goes to the playoffs,” ISU coach Rob Phenicie said. “Any time you beat your rival, by one point, 30 points, it don’t matter. It’s a big deal.”

Nayar’s number was called once more after starter Mike Beaudry exited the game early in the second quarter. Second-stringer CJ Jordan was absent after sustaining a leg injury versus SUU.

Beaudry played erratically before getting sandwiched on a sack. Game commentators noted the UConn transfer then headed to the locker room.

His sophomore fill-in struggled with accuracy and decision-making, passing 11-for-34 for 130 yards and an interception; Idaho State missed a chip-shot field goal after picking Nayar on his first series deep in UI territory.

His brightest moments came down the stretch. Nayar fired an 18-yard touchdown strike to a diving Hatten with just 2:48 on the clock to trim UI’s deficit to two. Hatten piled up 54 of his 95 yards on the drive.

Beforehand, ISU capped a lengthy series with a 32-yard rainbow from Tyler Vander Waal to Christian Fredrickson. It produced a nine-point cushion for the hosts.

But the Vandal defense, which slipped early but largely held down ISU’s potent offense thereafter, held firm in a crucial moment a series later. Tackle Jonah Kim logged his second sack of the afternoon, following it up with a tackle for loss to gift his offense its opportunity.

“I don’t think the defense played very well early on,” Petrino said, “but they came back and played well, made a bunch of plays that kept us in the game.”

Xavier Guillory, a Nez Perce tribal member with deep family ties to Lapwai, added a 43-yard leaping grab as the Bengals jumped out to a 14-0 lead, capping those series with red-zone rushes from Malakai Rango and Raiden Hunter.

“We came out and got on top of them,” Phenicie said.

That they did. The Bengals torched Idaho early with precision passing, soaring 94 and 87 yards downfield for touchdowns on their opening two possessions.

Nayar’s first few possessions didn’t amount to much as the Vandals tried to not get too fancy.

UI’s other first-half points came on a 46-yard Coffey field goal at the end of the second quarter, set up when Jalen Hoover blocked a rollout punt.

The pressure from UI's front seven began to ramp up as the bout progressed, and Vander Waal was forced into back-to-back interceptions by Wyryor Noil and Jaxon Woodward early in the third quarter.

Nayar took a read-option in for 6 after Noil’s pick to make it 14-12, and Coffey tacked on a field goal for UI’s first lead after Woodward’s sprawling takeaway.

Idaho rolled up 15 points consecutively as Idaho State had seven straight possessions between the second and third quarters stall out.

“We started making mistakes on offense and in the kicking game ... but credit the defense for holding them out when we needed to,” Phenicie said.

A 54-yard snag by an uncovered Conner and a 20-yard grab by Nate Shubert more than doubled ISU’s third-quarter yardage total. The Vandal run-stoppers had a sequence of swarming stops and ISU settled for a short field goal, creating a 17-15 lead to open the fourth-quarter scoring.

Coffey was a plus for the Vandals. He made ISU's offense work for its production, pinning the Bengals inside their 20 on six of his eight punts. Coffey had a long of 66 yards and went 3-for-3 on field-goal tries, including a 46-yarder.

“But we’re not going to make excuses,” Petrino said. “We had the reps, we had the guys.”

Clark reported from Lewiston. He may be reached at cclark@lmtribune.com, on Twitter @ClarkTrib or by phone at (208) 627-3209.

Idaho State receiver TANNER CONNER posted a career day with nine catches for 209 yards. His quarterback, TYLER VANDER WAAL, was 21-of-35 passing for 398 yards and guided the Bengals to an early 14-0 lead. Vandal receiver HAYDEN HATTEN grabbed nine balls for 95 yards, scoring on a diving catch with 2:48 left. Star UI linebackers TRE WALKER and CHRISTIAN ELLISS spearheaded a defensive resurgence after the first quarter, combining for 24 tackles. UI D-tackle JONAH KIM totaled two sacks and a tackle for loss, and single-handedly snuffed out an ISU series in the fourth. CADE COFFEY went 3-for-3 on field goals, with a long of 46 yards. Six of his eight punts landed inside ISU’s 20, and he had a 66-yard boot.

Reserve Bengal receiver Christian Fredrickson broke free from his coverage on a go route, flying through the UI secondary and hauling in a rainbow pass from Vander Waal for a 32-yard touchdown to extend ISU’s lead to 24-15 with 8:30 to play. The deficit ultimately proved too much for the Vandals’ messy offense to overcome.

The Vandals, who are now out of FCS playoff contention, travel north to the Inferno at Roos Field to take on postseason contender Eastern Washington at 1 p.m. Saturday.