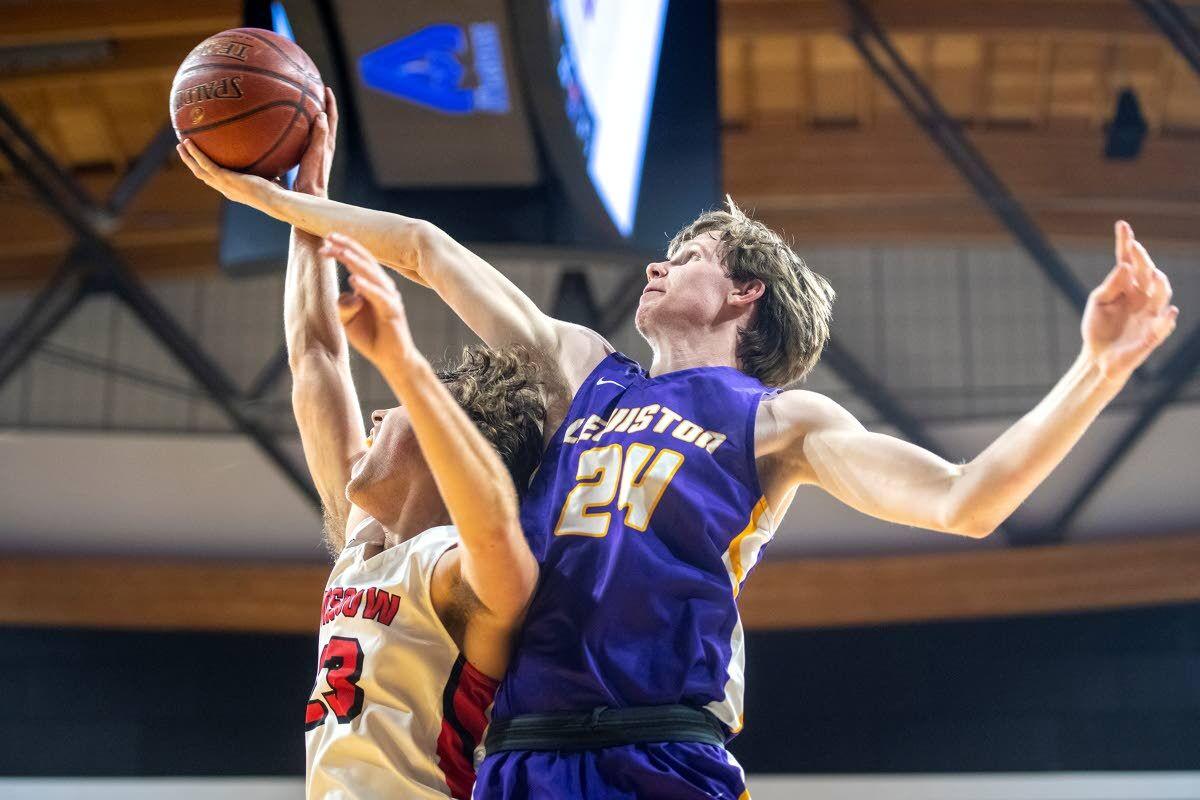 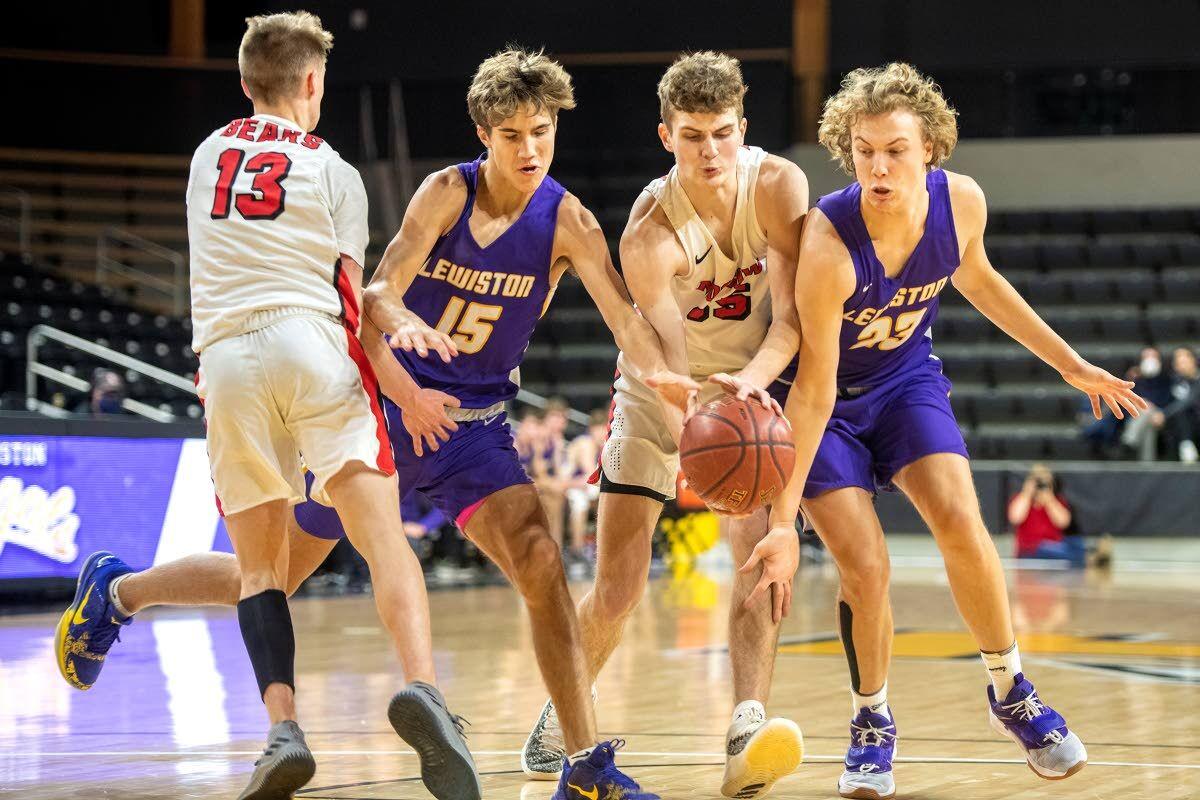 Lewiston’s Carson Way (15) and Aiden Hottinger (23) wrestle for a loose ball against Moscow’s Ian Hillman (35) during the second quarter of an Inland Empire League game on Monday night at Idaho Central Credit Union Arena in Moscow. 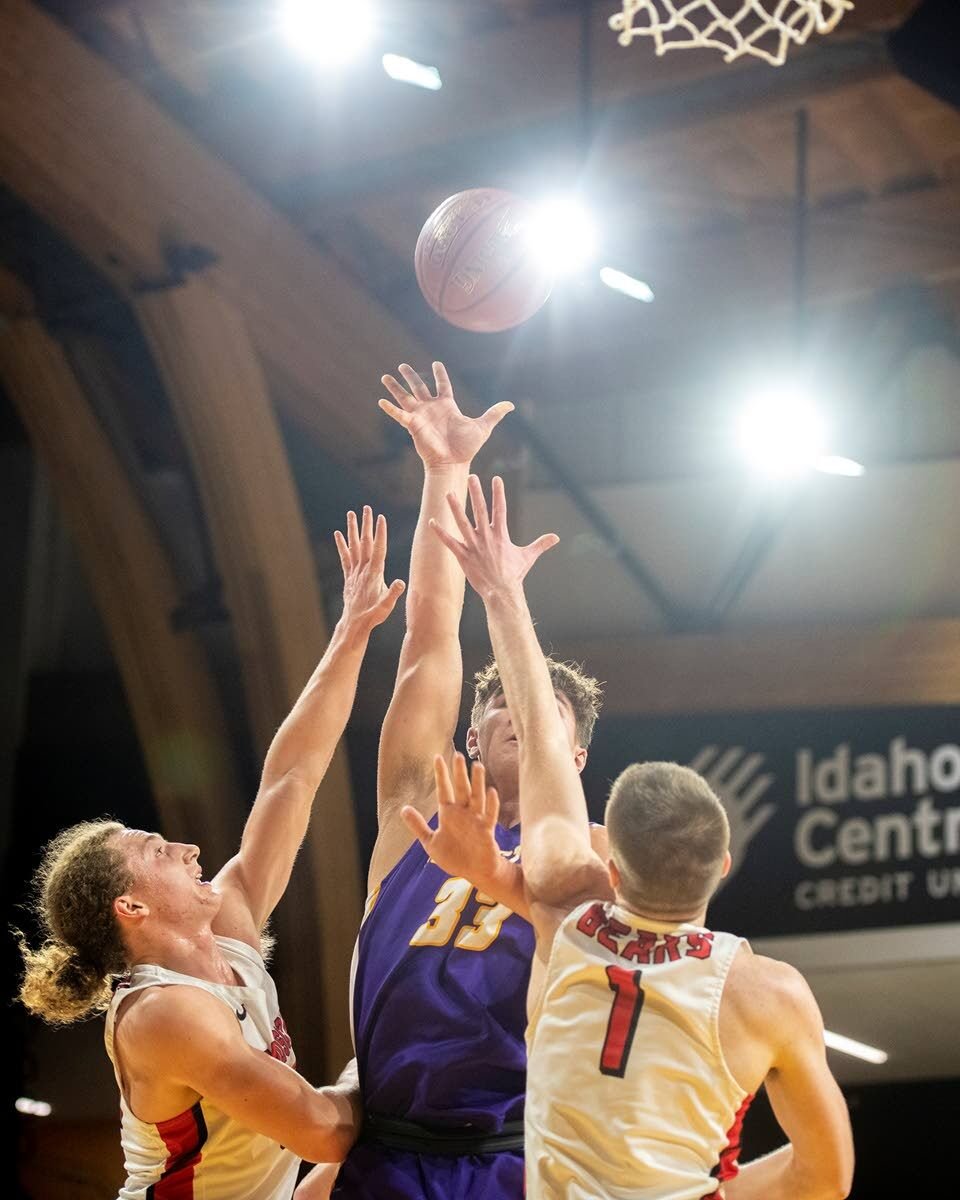 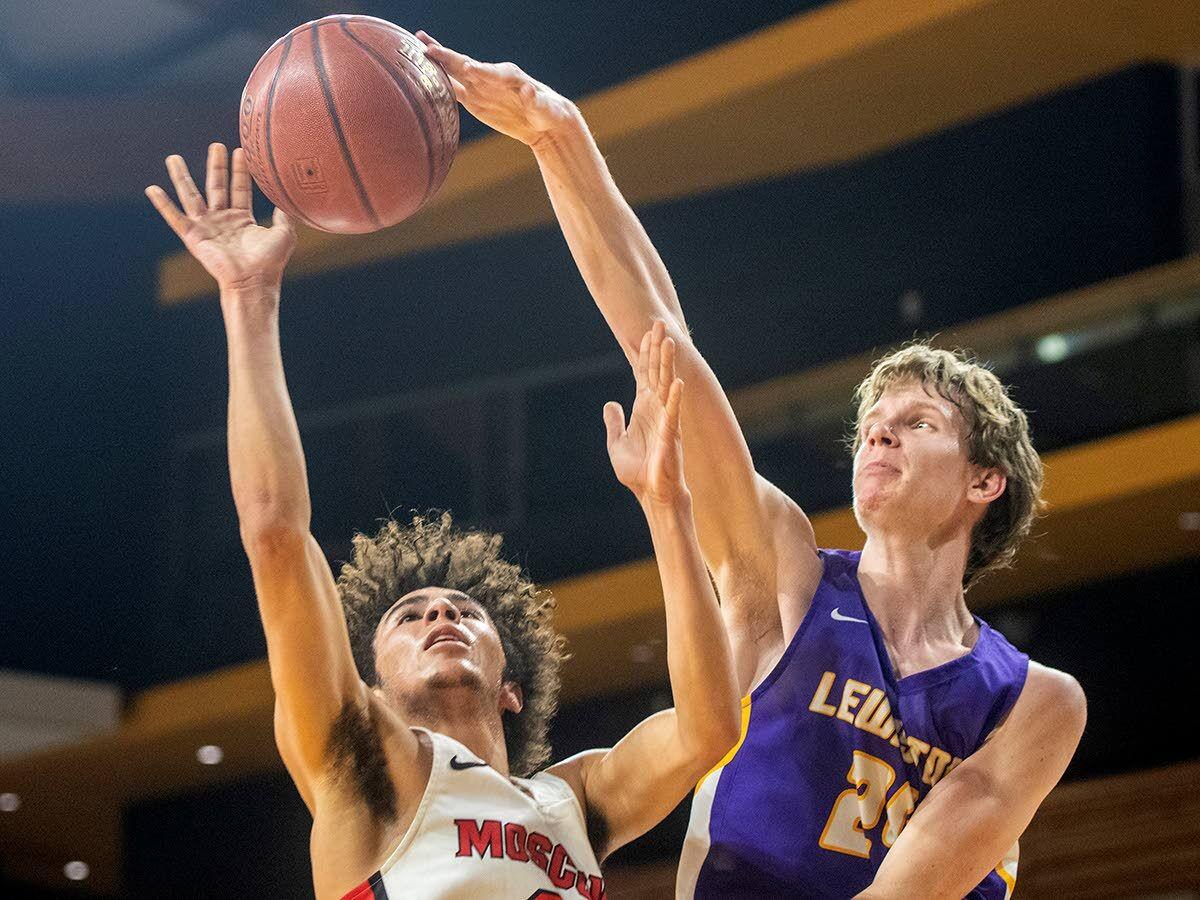 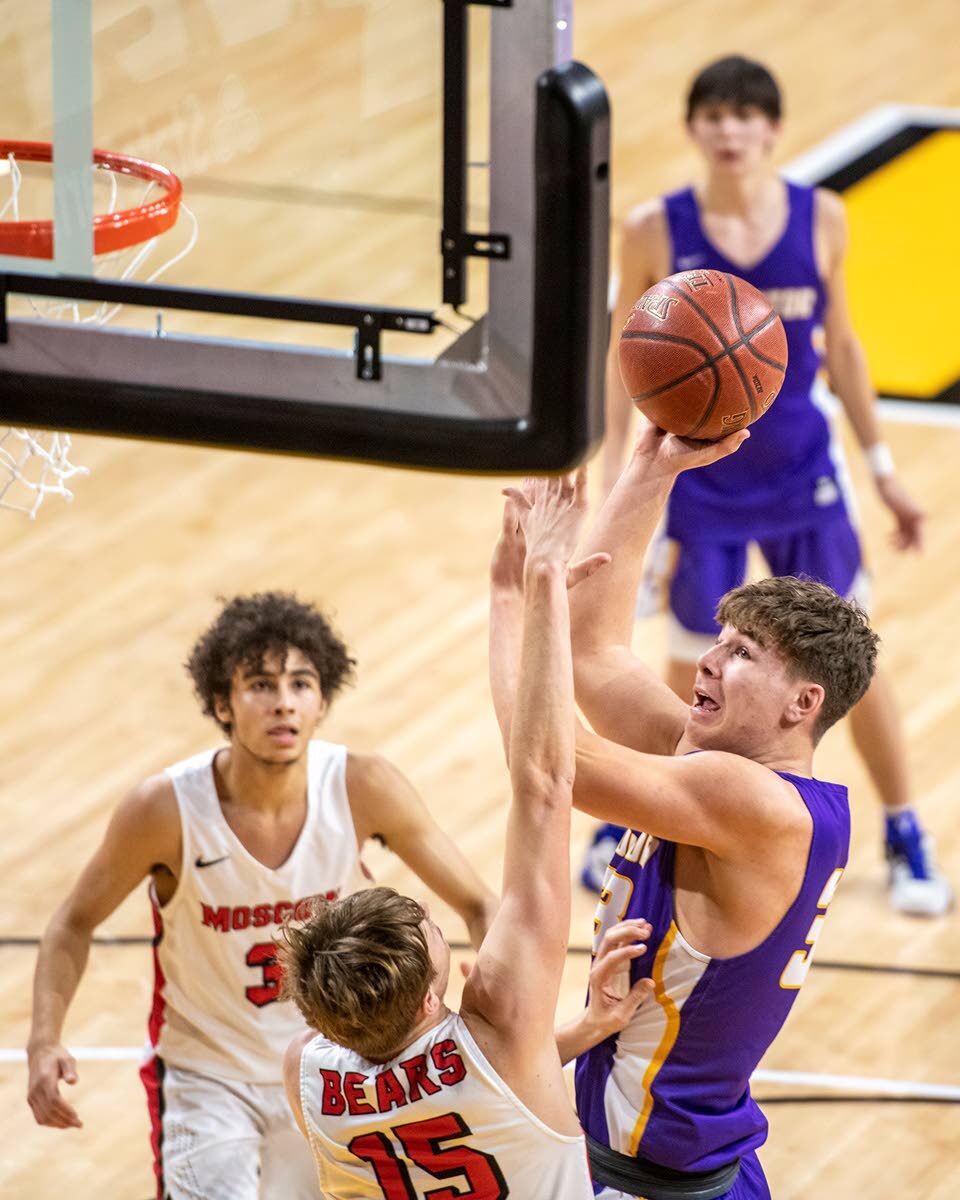 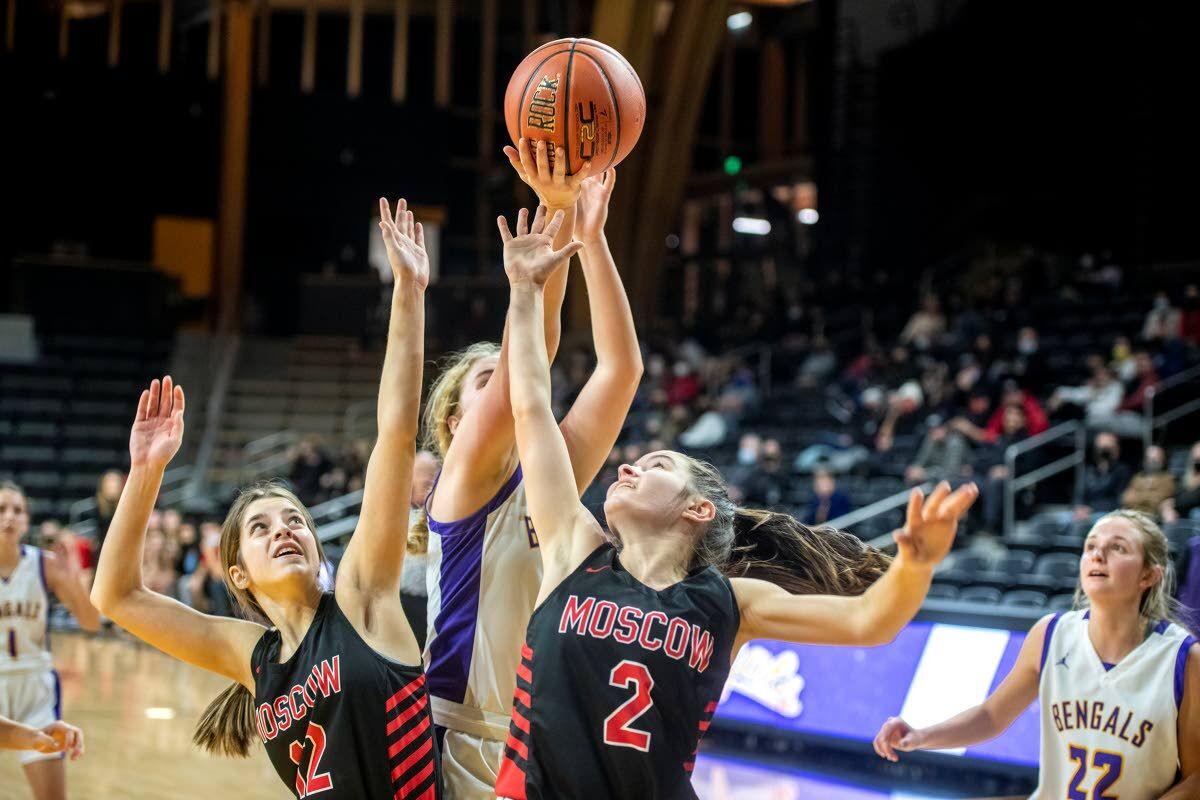 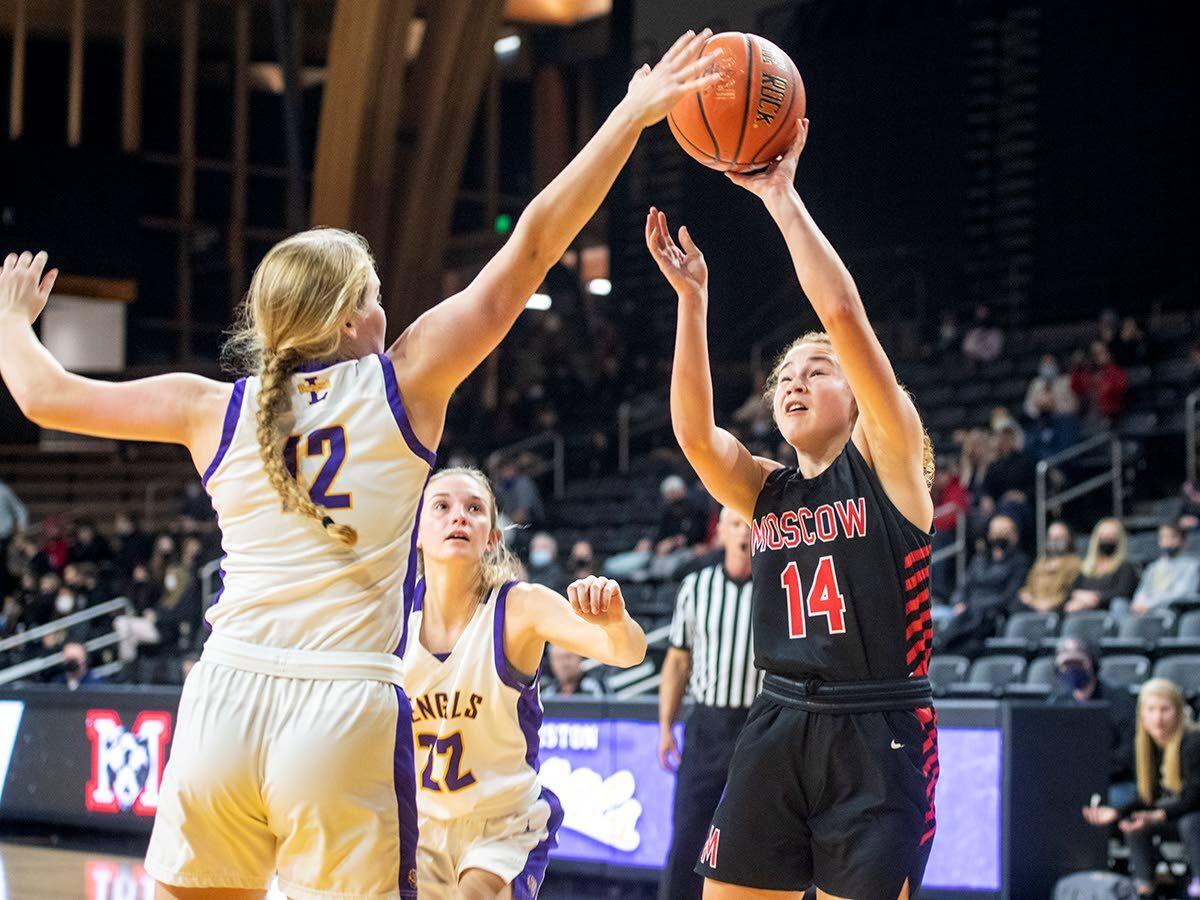 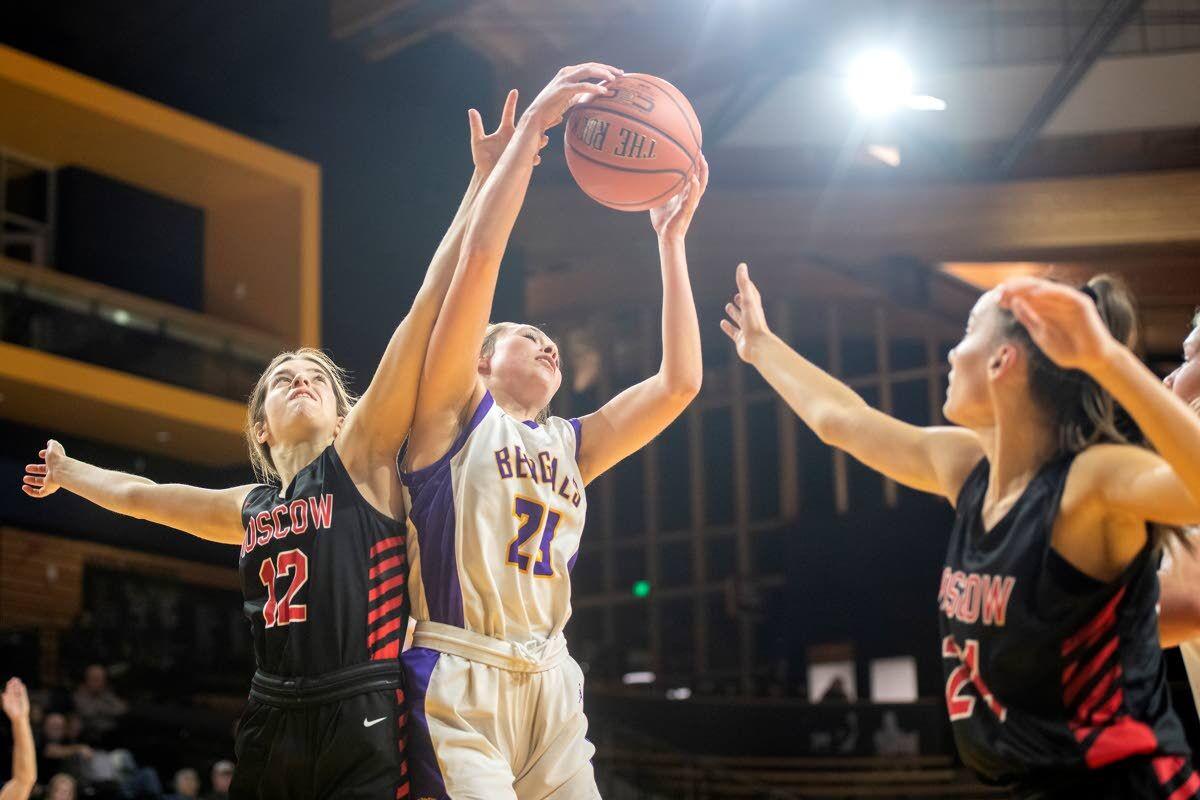 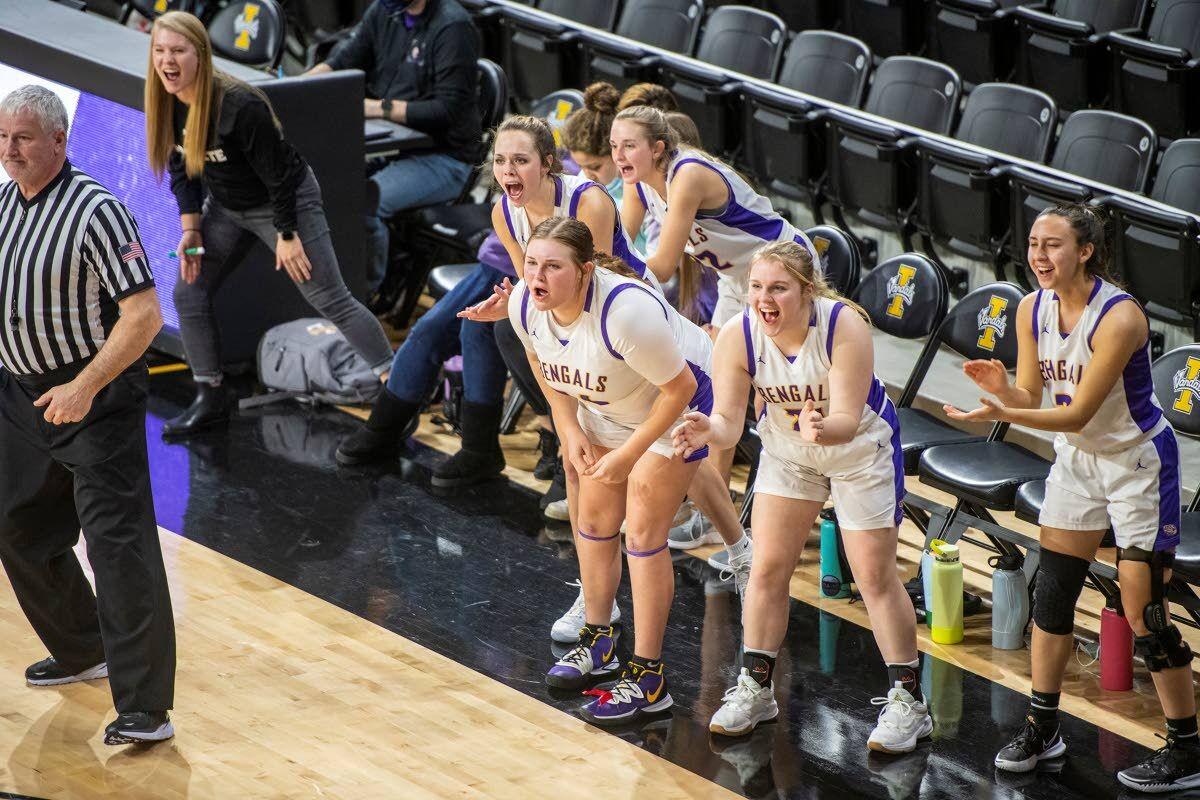 Lewiston’s bench reacts after a basket during the third quarter of an Inland Empire League game against Moscow on Monday night at Idaho Central Credit Union Arena in Moscow.

Lewiston’s Carson Way (15) and Aiden Hottinger (23) wrestle for a loose ball against Moscow’s Ian Hillman (35) during the second quarter of an Inland Empire League game on Monday night at Idaho Central Credit Union Arena in Moscow.

Lewiston’s bench reacts after a basket during the third quarter of an Inland Empire League game against Moscow on Monday night at Idaho Central Credit Union Arena in Moscow.

MOSCOW — It was the Moscow High School teams’ first chance to play in their hometown’s brand-new college basketball venue, and the Bear boys seemed especially motivated to show they belonged there as they tore out of the gates against Lewiston at the ICCU Arena on Monday.

The Bengals ultimately asserted themselves, however, prevailing 53-48 in a high-intensity nonleague game.

“This is a great environment,” Moscow boys coach Josh Uhrig said. “It’s a cool arena. I’m very appreciative that Idaho gave us the opportunity to play here; it’s quite an experience for these student-athletes.”

The Bears (6-6) had the advantage for most of the first quarter, holding their biggest lead of the night after Jamari Simpson feinted a long-range attempt before rifling the ball to an open Barrett Abendroth for an easy basket, then Cody Isakson sunk two free throws to make it 8-3 with a little under five minutes remaining in the period.

The Bengals (11-1) found their feet toward the end of the first, which came with the teams rapidly trading baskets and the score tied at 17. The Bears cooled off (one might say “hibernated”) in the second quarter while Lewiston’s move to a full-court press helped disrupt the pass-heavy Moscow offense, and the Bengals established a two-possession halftime lead of 29-23.

A crowd of several dozen Moscow fans in attendance, who had been occupying risers positioned diagonally to the action, mass-migrated across the court during intermission to station themselves in the seating directly behind the Lewiston hoop. The Bear supporters thereafter added various attempts at visual distraction to their usual noisy clamor during Lewiston free throw attempts, but their efforts would come to naught, as the Bengals went a perfect 8-for-8 from the foul line in the second half.

Lewiston’s Jace McKarcher shone early in the third with a 3-point goal, two free throws, and a fall-away swish on another 3 to help the Bengals establish their largest lead of the night at 39-31. Moscow’s Simpson answered with a tear of his own on the inside, making several slick plays in close succession to help put the Bears back in the picture.

“Simpson on a mission!” exclaimed Moscow announcer Sam Hoogsteen after the 6-foot senior guard weaved in for back-to-back hook shots that pulled Moscow within four at 39-35.

Moscow would pull back within a possession at 44-41 to finish the third quarter, then as close as a single point late in the fourth at 47-46 and 48-47, but never again took the lead. A pair of Braydon Forsman free throws — the first narrowly rolling in, the second swishing — with 12.6 seconds left established the final scoreline.

“That’s just kind of what we’ve done all year,” Lewiston coach Jayson Ulrich said of his team toughing out the hard-fought contest. “We hang around defensively. You’re always going to give something up. We made them have 30-plus second possessions consistently. We fell asleep early on a couple, then we locked it down.”

Simpson finished with a game-high 15 points, 10 of which came in the third quarter, while McKarcher led Lewiston scorers with 13, and Cruz Hepburn provided a diverse stat sheet with seven points, six rebounds and what his coach called “a couple big steals.”

Earlier in the evening, the Lewiston girls also trailed early before rallying to defeat Moscow 40-33.

A low-scoring first half saw the Bears (3-12) lead 10-6 through the opening quarter and 15-11 heading into intermission.

The Bengals (8-8) moved to a vigorous full-court press coming out of halftime, dramatically changing the complexion of the game as Moscow (3-12) struggled to move the ball down the court without committing turnovers or missing hasty shot attempts. Moscow, meanwhile, racked up more fouls trying to stop Lewiston players closer to the hoop and provided the Bengals with a majority of the game’s free throw attempts Lewiston going 15-for-18 from the line on the night to Moscow’s 6-for-10.

“We knew that we had to bring it to them in the second half and make things a little harder for them, so kudos to my guards,” said Lewiston coach Karlee Stefanchik, citing the efforts of Ahnika U’Ren, Karli Taylor, Emily Collins, and Zoie Kessinger.

The Bengals had routed Moscow 56-31 in the teams’ previous meeting this season, but the Bears have “just gotten better over the season,” according to coach Alexa Hardick. Lewiston standout Katy Wessels was not at her best, but came up with 11 points off two field goals and 7-for-9 free throw shooting. Angela Lassen led Moscow scorers with nine points.