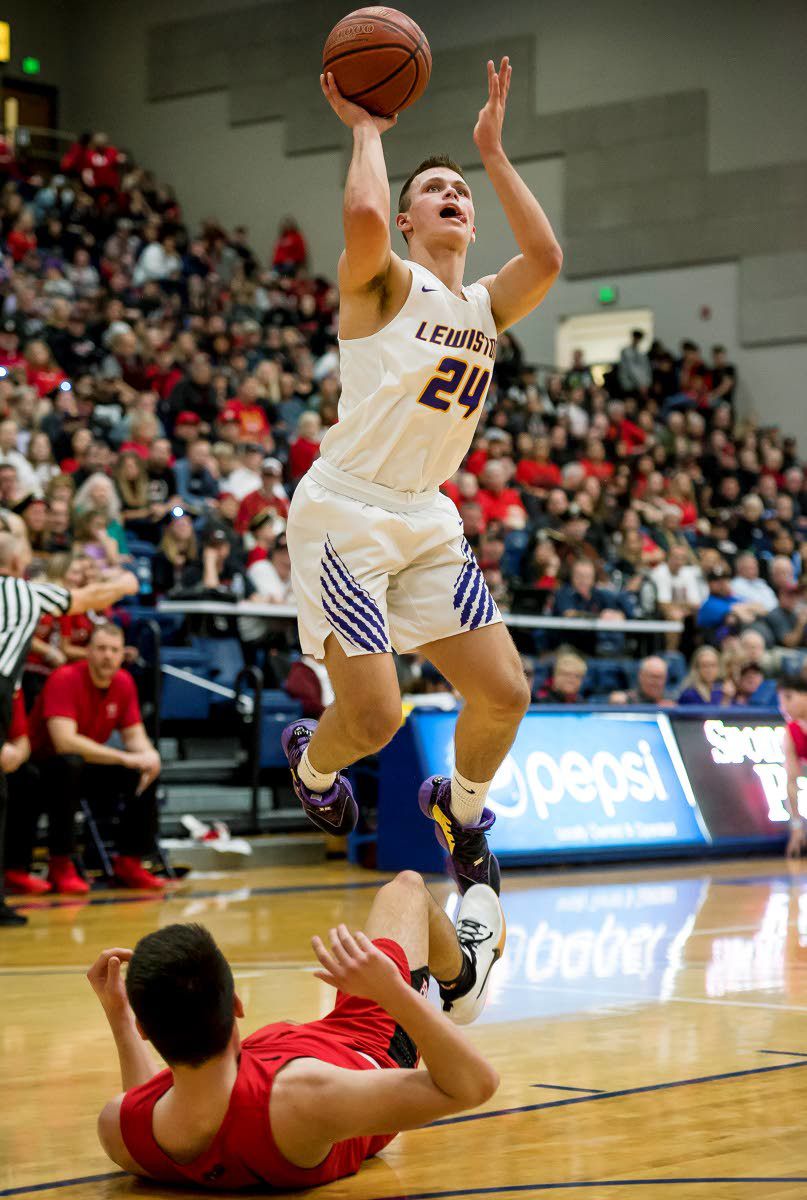 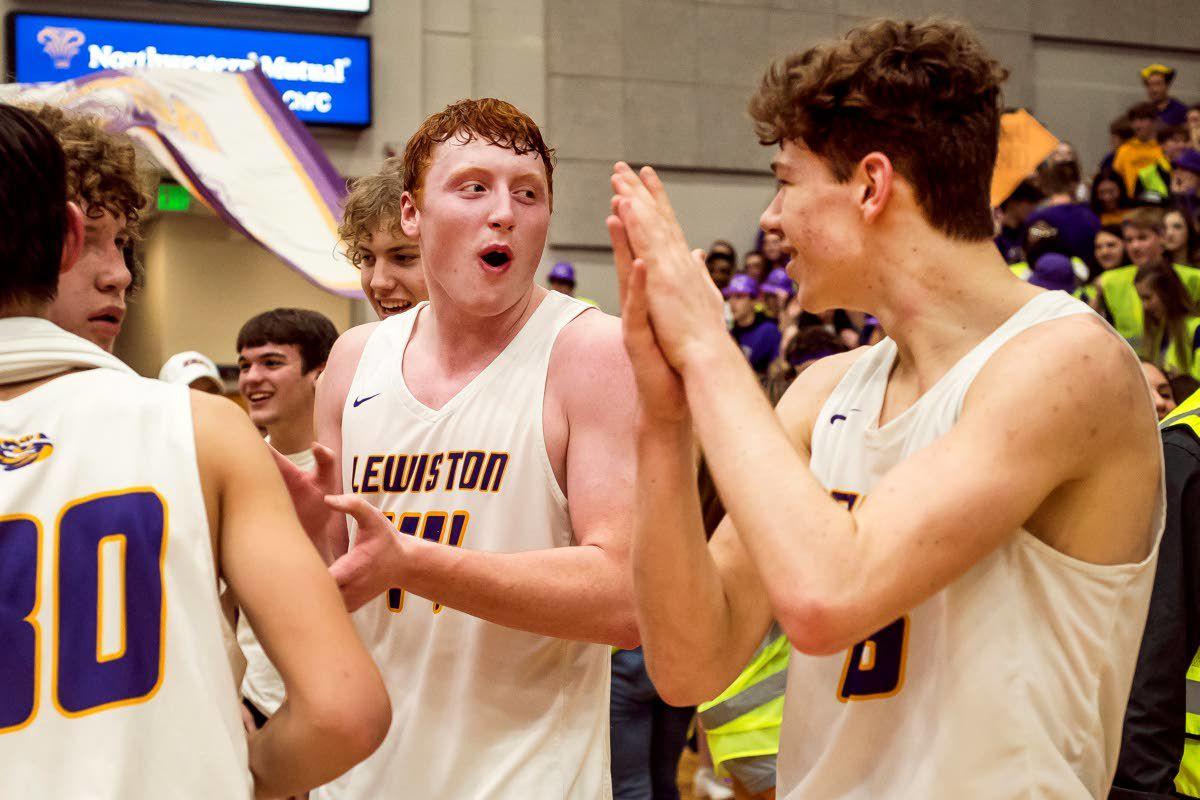 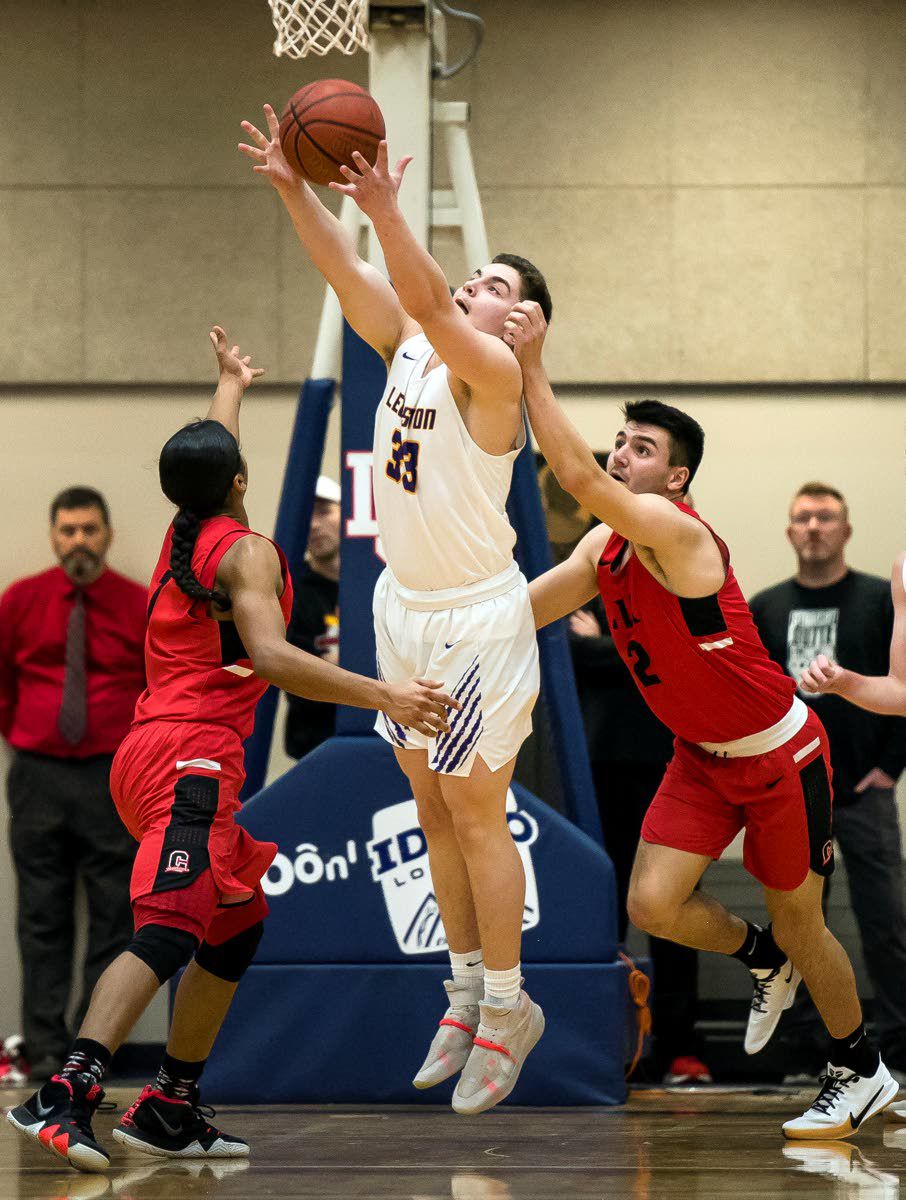 Lewiston center Alec Eckert (33) snags a rebound in front of Clarkston guards Tru Allen (1) and Alessandro Italia (2) during Lewiston boys' 56-33 win against Clarkston in the 2020 Golden Throne at Lewis-Clark State College on Friday.

Lewiston center Alec Eckert (33) snags a rebound in front of Clarkston guards Tru Allen (1) and Alessandro Italia (2) during Lewiston boys' 56-33 win against Clarkston in the 2020 Golden Throne at Lewis-Clark State College on Friday.

If there was ever a sign that the Lewiston High boys’ basketball team is reemerging as a group to be feared, it was at its most palpable at the Lewis-Clark State Activity Center, in front of an audience that won’t forget it.

The Bengals, who’d lost seven straight Golden Throne tilts against Clarkston before Friday night, controlled the pace and scoreboard from start to finish to upend their border-rival Bantams 56-33 before a packed house of about 3,500 spectators.

“They wanted to change Lewiston basketball,” sixth-year Lewiston coach Jayson Ulrich said of his team, “and this is the place where you make those changes, these big games.”

For the cherry on top, the Bengals were announced as champions of the Golden Throne spirit competition. They reclaimed the gilded toilet after losing it last year, much to the delight of their densely filled student section, which hardly took a moment to breathe.

“I told them, ‘This is the least amount of stress I’ve had for a (Throne) game,’” Ulrich said. “They were just focused, dialed in. I said, ‘At times, you’re not gonna hear me anyway, so I’m just gonna sit down and watch.’”

Lewiston (11-3) didn’t give its coach much anxiety, and didn’t exude any jitters in a game that’s known for breeding them. The Bengals played persistent defense, and boasted an offense prone to spreading the wealth. Their ball movement often took Bantams off assignments, creating clear looks at the hoop.

Jace McKarcher led his team with a clean 15 points and Joel Mullikin chipped in 10. Cruz Hepburn and Kash Lang had eight and seven, respectively, a few of those in clutch moments.

“I knew I’d have to step it up; I knew (Clarkston star) Tru (Allen) was gonna guard me,” McKarcher said. “But I like to share the ball and get everyone involved. That’s how we play, we play like a team.”

Allen led the Bantams (8-5) with 21 points, but he was almost all of the air in their offense, which had trouble creating high-percentage opportunities.

“In the beginning, we were probably too anxious,” Clarkston coach Justin Jones said. “It was an uncharacteristic game for us, as far as Clarkston basketball goes. We didn’t shoot the ball well (13-of-39) and didn’t defend at times. Those are the two tenets of Clarkston basketball.”

The Bengals, who shot 18-for-29, took a double-digit lead after five minutes, getting what they wanted in transition and connecting on a couple of hard-fought runners. Meanwhile, the Bantams went four minutes without a score.

When Clarkston began to answer, Lewiston only answered back quickly, furnishing an 11-point lead at the break with settled takes.

The Bantams cut it to seven — as close as they got — midway through the third quarter, when Lewiston started to slow down, and only scored one point over a five-minute stretch. But like the whole of the night, the Bengals remained cool and collected.

“We came in feeling it,” Mullikin said. “Our defense was solid, and just with the energy in the building, that all helped. ... I feel like I was more nervy last year. This year, we were just hyped to play.”

Mullikin netted a triple to snap the lull, then McKarcher swiped the ball on the ensuing possession, drove inside, and flipped a nifty pass to Alec Eckert for a finish.

Ulrich said that moment, late in the third period, signified that Lewiston “was rolling.”

Ulrich credited McKarcher for spreading the floor, and Mullikin and George Forsmann for using their length to “alter shots.” He also lauded point guard Lang for his defense on Allen, plus his veteran leadership in the week leading up to the game.

“He’s the coach on the floor,” said Ulrich, whose team has no seniors. “He kept them focused.”

On this night, they were focused to a fault. Lewiston erupted on a 14-3 spurt to start the fourth, highlighted by a Hepburn 3-pointer and a tough, traditional 3-point play from McKarcher. The Bengals were running away with it.

They had reason to celebrate at the horn, and even more so a few minutes after, when it was announced that they’d be able to proudly display the Throne in their new high school next year.

“This has gotta be one of the craziest and most beneficial rivalry games in the Northwest,” Ulrich said. “These kids all put in a lot of work. I’m so happy for the school, happy for these guys. It was a lot of fun tonight.”

Willow Center provides support for families grieving the death of a loved one; Rock Steady Boxing helps Parkinson’s patients with a non-combat training program; Backpacks for Kids provides backpacks filled with food for weekends; Homes for Hope assists families taking in children for foster care, and the Green Apple Project is an autism awareness and support non-profit group.

The Bengals’ theme was “construction.” Their skit at intermission of the boys’ game featured Lewiston students in construction hats and vests, dancing to labor-oriented songs.

The Bantams took on the role of pirates. Their halftime dance included the Spongebob Squarepants theme song, Pirates of the Caribbean tracks and other swashbuckling-type anthems.

Where the fans are flush with school spirit

School spirit from both the Lewiston Bengals and the Clarkston Bantams was on full display at the 2020 Golden Throne basketball games at Lewis-Clark State College on Friday.