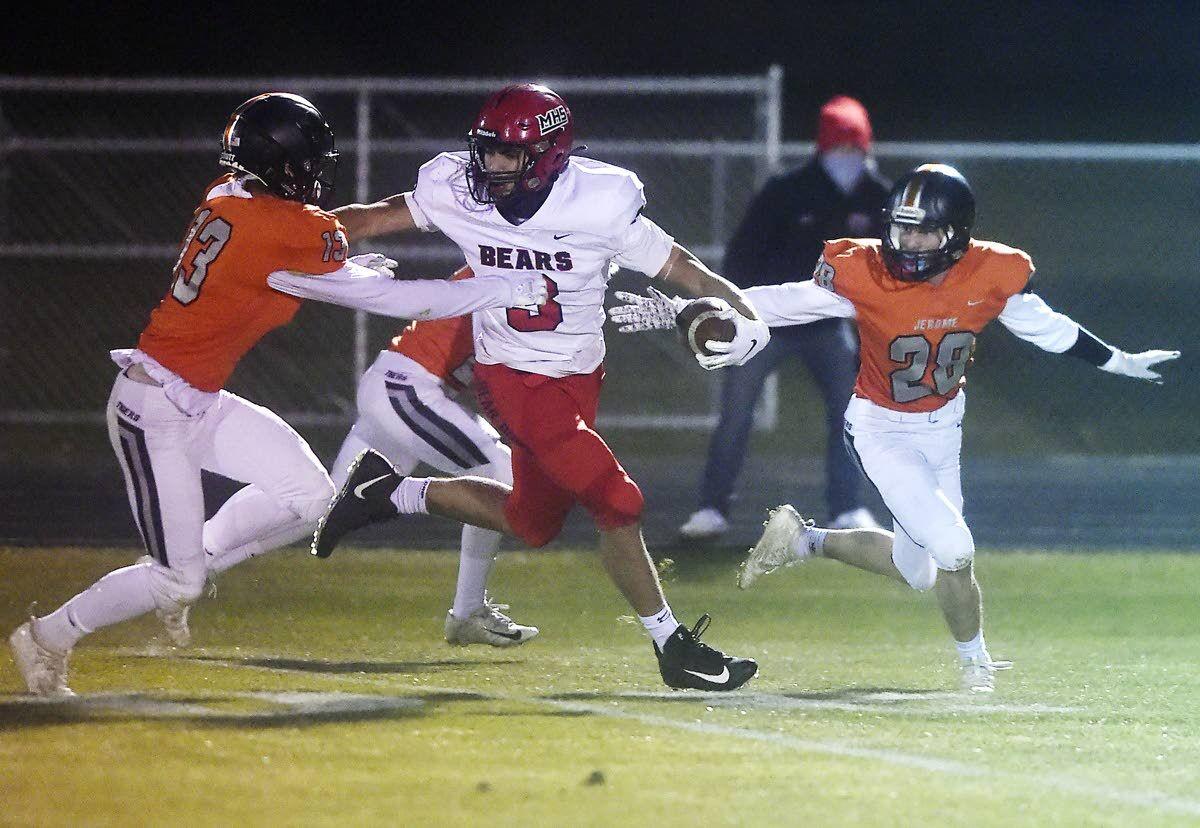 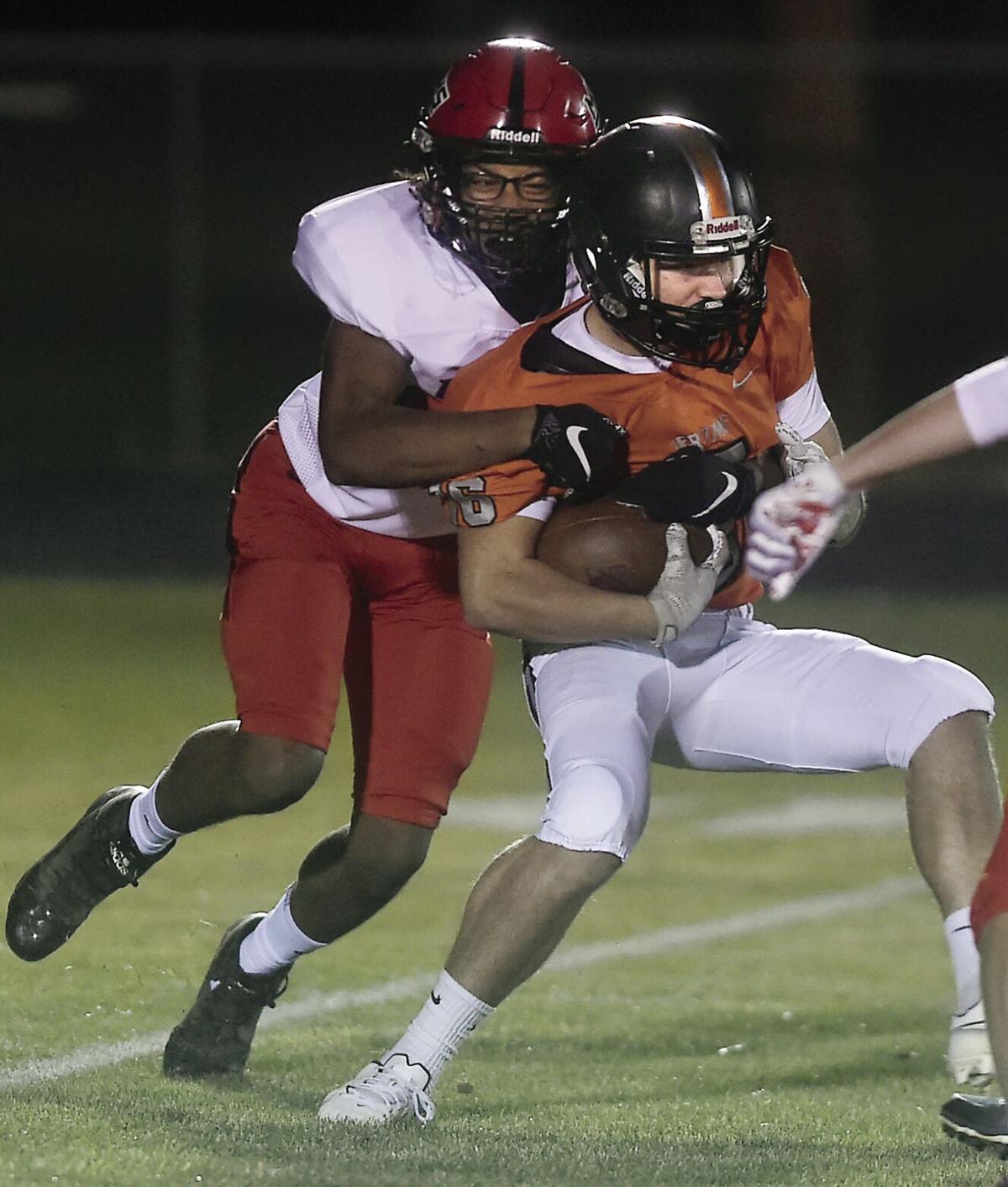 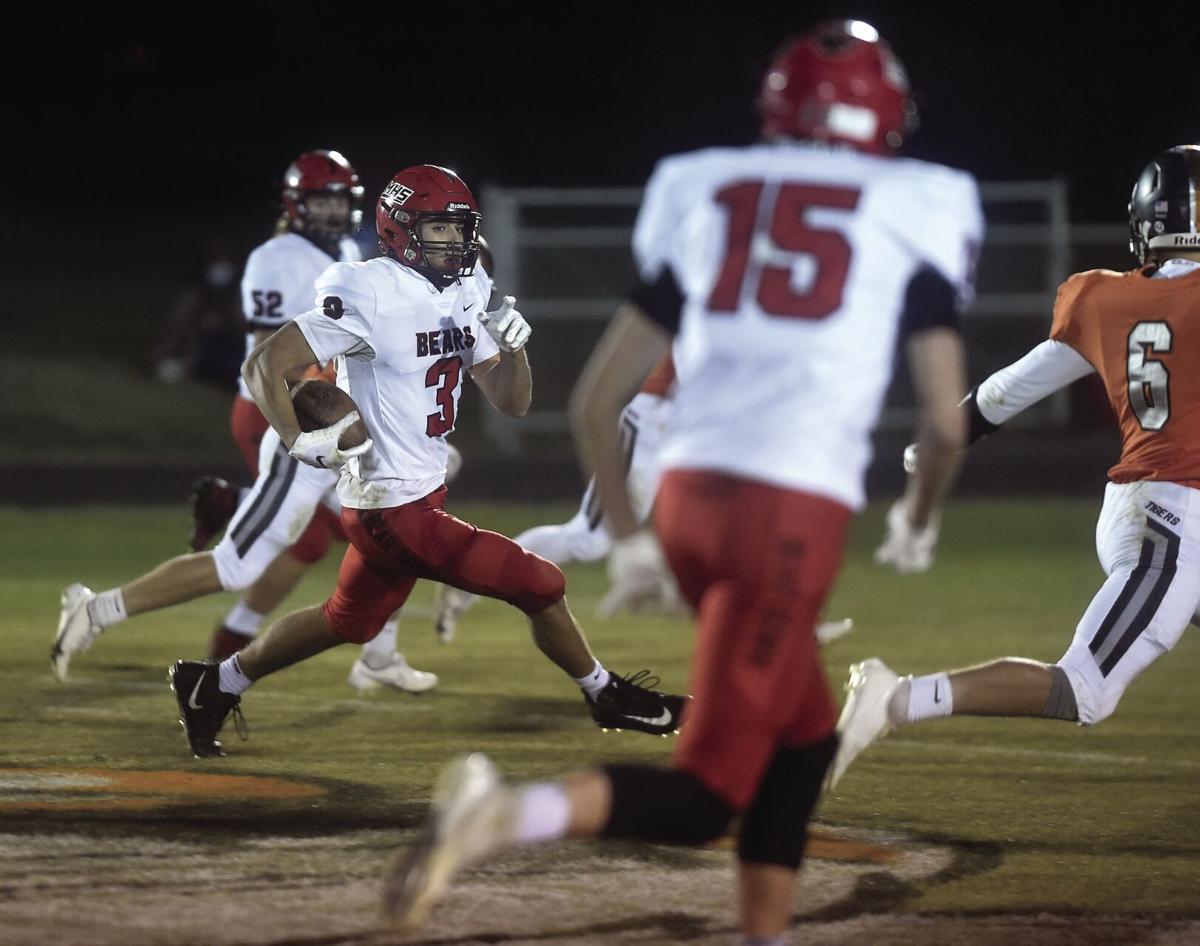 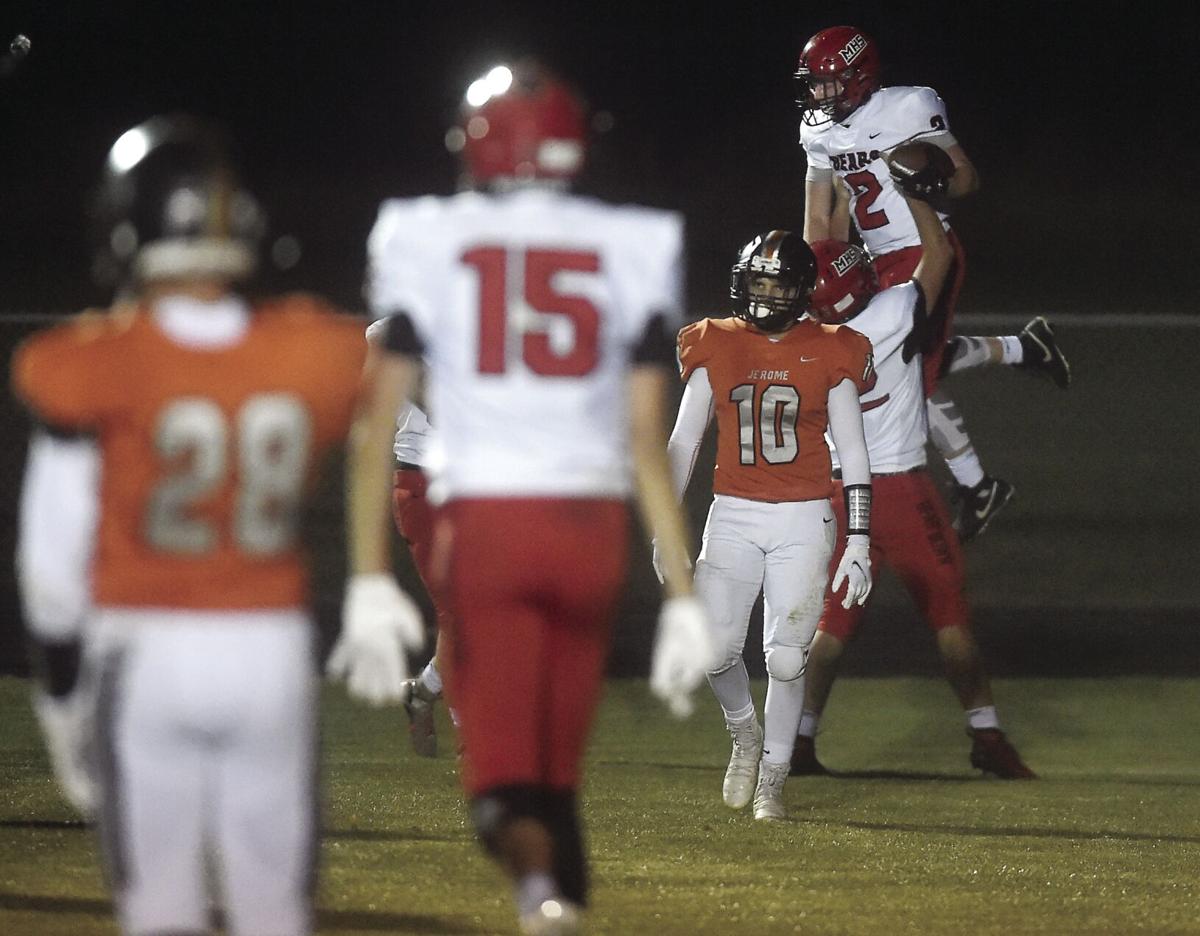 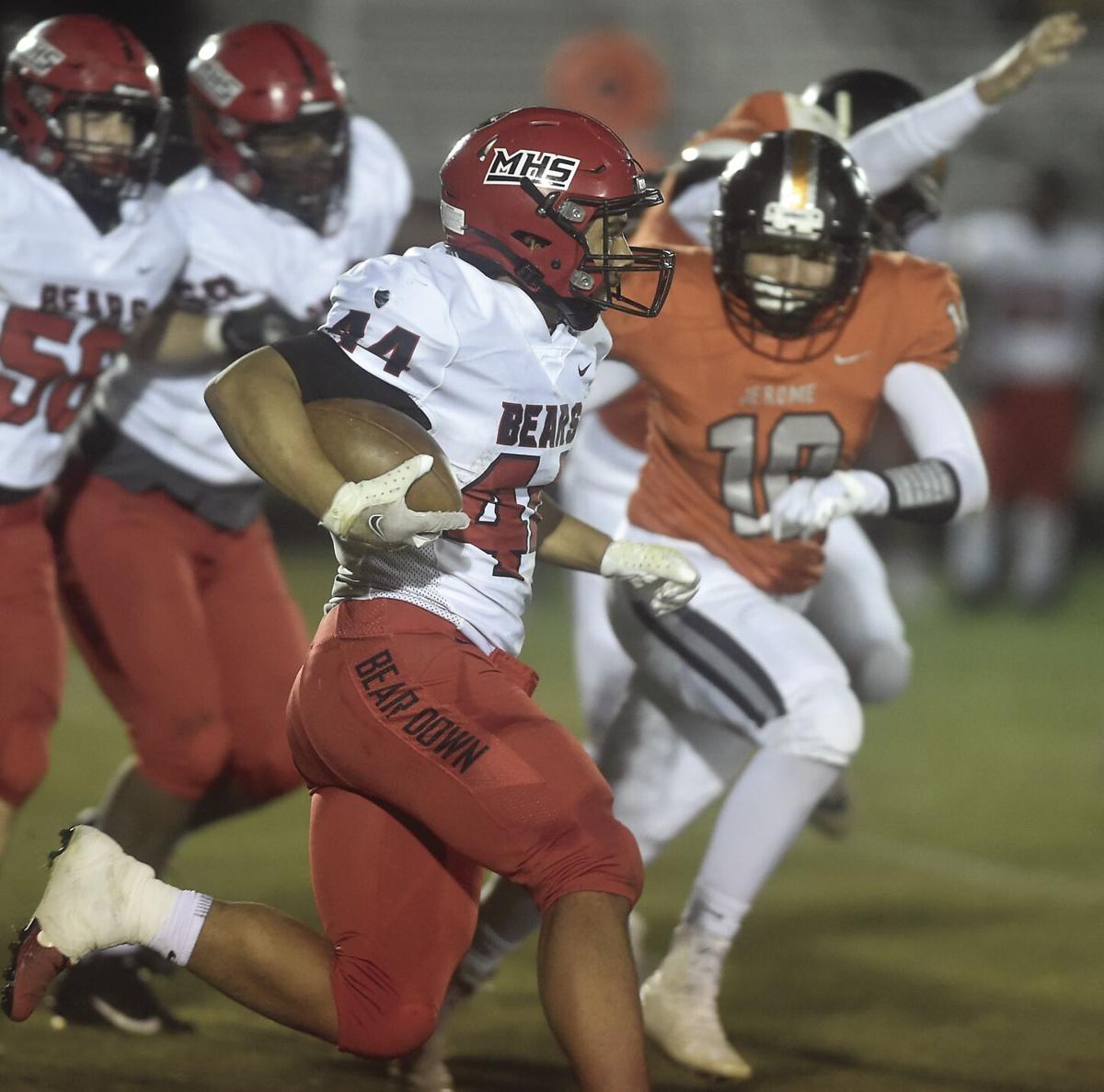 JEROME, Idaho — Not only did Moscow win its first playoff road game in what’s believed to be more than 20 years, the Bears left no doubt about who was the better team Friday night at Jerome High School.

Playing more than 400 miles from home, Moscow dismantled the Jerome Tigers 45-7 in the first round of the Idaho Class 4A high school football playoffs.

The Tigers (6-3) never got comfortable.

Moscow (4-1) induced six turnovers, including one on Jerome’s first play of the game and three in the end zone, and the Bears racked up more than 500 yards of offense in their highest-scoring game since a Week 1 win over 3A Bonners Ferry.

“Extremely proud of our guys,” Moscow coach Phil Helbling said. “They played a complete game. I thought we’d be able to play with these guys and pick up a win in a hard-fought game, but our guys just took the will from them.”

After Jerome coughed up the ball on its first play just seconds into the game, Moscow marched 39 yards on eight plays, capped by a 5-yard touchdown run by senior Lane Hanson.

It was the first of two scores for Hanson, who was playing in his first game since suffering a concussion against Lewiston on Oct. 2. The speedy senior took advantage of his return by racking up a team-high 111 rushing yards.

“To have Lane back on the field is a difference-maker,” Helbling said. “Just his athleticism and his ability to cover defensively, and his speed offensively just provides another dynamic to our offense. It keeps defenses on their toes.”

Jerome found itself in position to potentially take the lead on its next two drives, but the Tigers lost the ball in the end zone on both occasions, one a fumble into the end zone for a touchback and the other an interception by Cody Isakson.

Isakson also intercepted a ball in the end zone on Jerome’s final drive in the fourth quarter off a tip by teammate Jamari Simpson.

“Bend but don’t break,” Helbling said. “They had multiple opportunities and chances and our guys stuck with it. And that’s what we talk about. That’s what we preach.”

Moscow led 19-0 before Jerome finally got on the scoreboard in the second quarter with a 3-yard pass from Dalan Thompson to Shayler Bingham. But that would be the only score of the game for the Tigers.

Moscow poured it on after halftime with three more quick touchdowns. Just three plays into the half, Moscow quarterback Chad Redinger found tight end Jonah Elliss breaking free up the middle and hit his fellow senior in stride. Elliss raced the rest of the way to the end zone untouched for a 67-yard touchdown.

After a Jerome fumble on its next possession, Moscow scored again four plays later on a 4-yard run by Hanson.

Everyone got involved for Moscow.

Redinger finished 12-of-17 passing for 245 yards with three touchdowns and one interception. Hanson and Simpson each had two scores for the Bears.

“To see some of those guys who haven’t been as involved through the course of the year just come out and play big football in crucial situations is huge,” Helbling said.

Thompson navigated Jerome’s prolific passing attack to 291 yards, but he also had three costly interceptions and only found the end zone once.

The Bears will face a familiar foe in the second round of the playoffs when they take on Inland Empire League opponent Sandpoint — the only team to defeat Moscow this season.

“It’s a great opportunity, first and foremost, to play a little bit closer to home,” Helbling said. “But I know our kids, they want revenge. We really felt like we didn’t play extremely great up there, and I know our kids are going to be thrilled.”