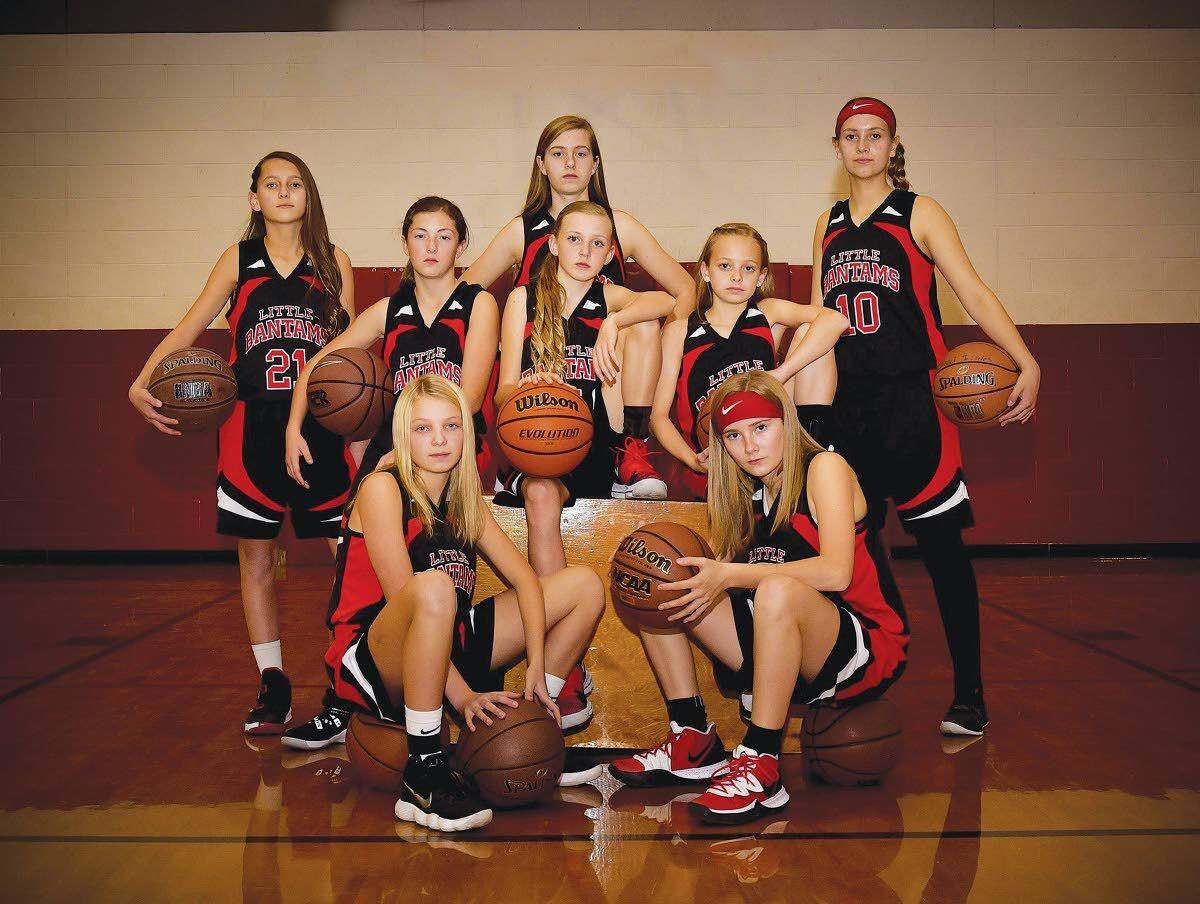 Members of an eighth-grade girls’ travel basketball team, the Little Bantams, pose for a photo recently. The group was one of 70 teams scheduled to play in this past weekend’s Battle Basketball tournament at the new Lewiston High School and Booth Hall before the event was canceled because of lack of facilities. 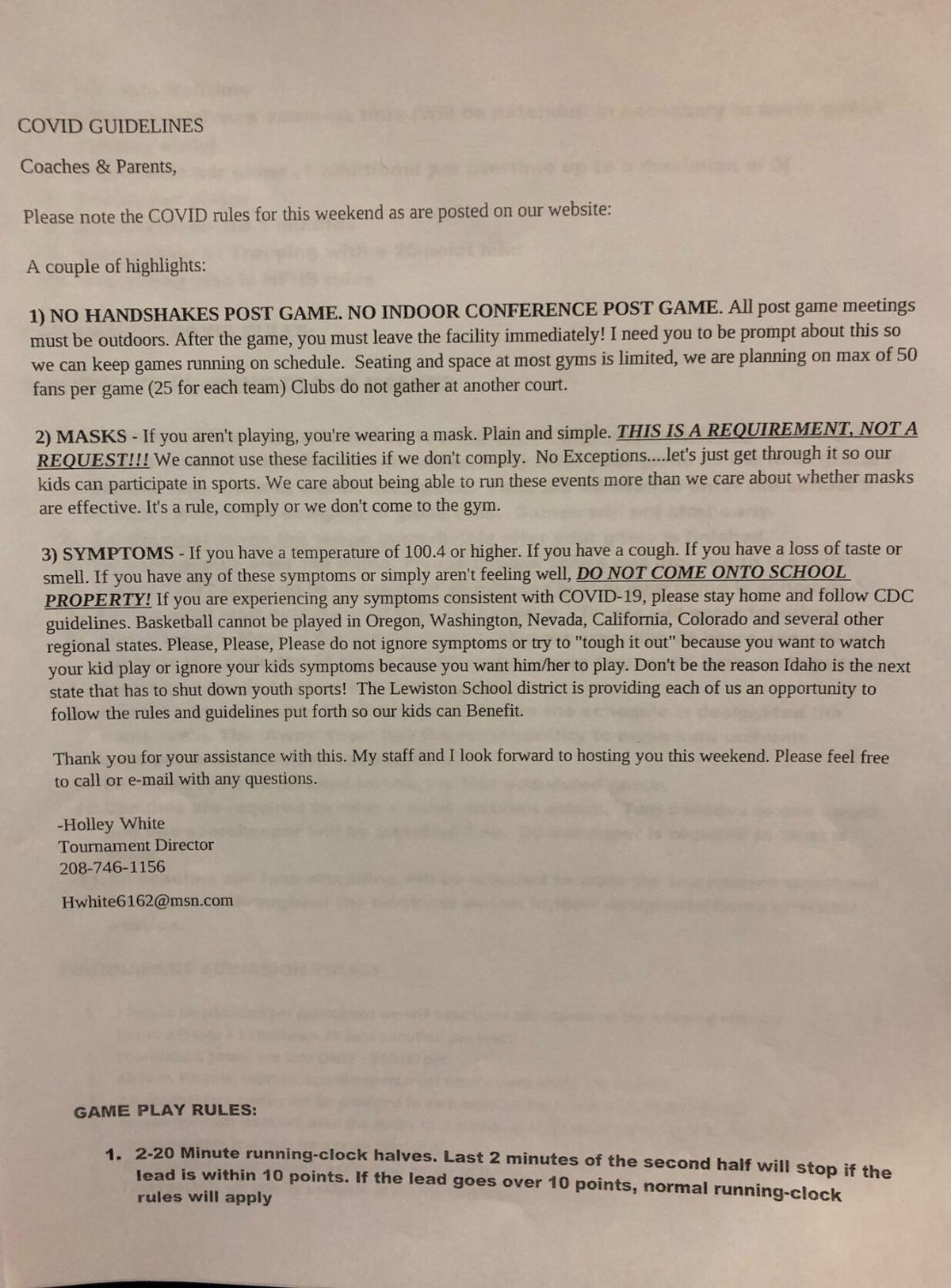 Here is the cover letter from Battle Basketball's Holley White on the protocols in conducting tournaments amid the coronavirus pandemic.

Members of an eighth-grade girls’ travel basketball team, the Little Bantams, pose for a photo recently. The group was one of 70 teams scheduled to play in this past weekend’s Battle Basketball tournament at the new Lewiston High School and Booth Hall before the event was canceled because of lack of facilities.

Here is the cover letter from Battle Basketball's Holley White on the protocols in conducting tournaments amid the coronavirus pandemic.

A basketball tournament scheduled to take place this past weekend in Lewiston was canceled because of lack of facilities to contest the games.

Battle Basketball, a member of the Amateur Athletic Union, had events scheduled for this past Saturday and Sunday as well as this coming weekend at facilities in the Lewiston School District, but the district told the group they couldn’t conduct the events on their properties out of an abundance of caution because of the coronavirus pandemic.

In an email sent to the Tribune on Tuesday, the district said it was limiting outside use of the facilities at this time. The district made no other statement.

The tournament, set to take place this past Saturday and Sunday, was going to bring in a total 70 boys’ and girls’ teams from fifth grade through high school not just from Lewiston, but from all around the region, including from Spokane, Walla Walla and other areas of eastern Washington. Four courts were to be used at the new Lewiston High School in the Orchards, as well as Booth Hall on the former high school campus, and at Sacajawea and Jenifer middle schools. A rough estimate had the number of people coming into the area at 1,600. A total of 140 games were scheduled to take place.

Leadership from Battle Basketball declined numerous interview requests from the Tribune for this story.

“We are in a pandemic and we are experiencing an increase in the number of cases within our region, so yes we are very concerned about the safety of the players, their families and our community,” Macke said in a statement. “Large gatherings are discouraged and we continue to promote at least six-foot physical distancing from other individuals whenever possible, washing hands with soap and water for at least twenty seconds as frequently as possible or use hand sanitizer, covering coughs or sneezes, regularly cleaning high-touch surfaces and not shaking hands, staying home if sick and wearing face coverings while in public, especially when six-foot distancing is not always possible.”

John Roy, a coach who has teams that participate in Battle Basketball tournaments, said the event was complying with health department and school district policy, and it was unfortunate the tournament was canceled.

“We were very disappointed,” Roy said. “I’m not a legal expert and I’m not a health expert. The health department is key in that and emergency management is key in that. The city, the county and the state — everyone has to abide by the rules. When people do abide by the rules and they put in all of the cleaning protocols, it upsets me that there are people out there that think they are smarter than all of these people, and they want to shut it down for no reason.”

The numbers of people being infected by the coronavirus are spiking as the country sees a third wave of the first phase sweeping the nation. Idaho’s numbers the past two weeks have shot up, and in particular in Nez Perce County, where the number of positive cases for the week ending Saturday was at 129, a 200 percent increase from the week ending on Oct. 10, when the number of cases was at 63. There are a total of 61,785 confirmed and probable cases in Idaho as of 4 p.m. Pacific on Wednesday, with 862 new cases, and a total of 599 deaths. In Nez Perce County, there were 862 confirmed and probable cases, including 24 deaths. Since Saturday, the number has spiked by 105 cases.

Also, the school district released numbers Wednesday stating there had been 50 positive cases reported between students and staff, out of a total of 5,587, since the school year began in August. Of those cases, 34 are considered active, including two students at Lewiston High School, one at Sacajawea Middle School, along with a staff member at McSorley Elementary in the latest update. This is an increase of 23 cases in the past five days. The school district has remained in the green phase despite rising numbers.

Pleas for the two tournaments not to be conducted began ramping up Oct. 21 when Connie Hallen, an administrative assistant in the division of Natural Sciences and Mathematics at Lewis-Clark State College, emailed the school district expressing her concerns about the tournament being held.

In the email, which also was sent to the Tribune, among others, Hallen expressed concern because of the amount of people coming in from out of town and the effect it would have on not just her daughter, who is a teacher at Lewiston High School, but her grandchildren, who go to school in the district.

“While our community would typically be excited to celebrate a tournament such as the AAU has coordinated, the promotion of this event during the current pandemic is offensive to those of us who are doing everything in our power to take precautions and prevent the closure of our local schools,” Hallen said in the email. “Not to mention all of the other events that have had to be cancelled for far less risk than this basketball tournament.”

High school sports have taken place around Idaho throughout the fall. But with the state of Idaho moving back to modified Stage 3 protocols after Gov. Brad Little’s announcement Monday, spectators will be limited with 25 percent capacity for outdoor events, and the IHSAA is limiting fans to just 25 per team for this weekend’s state volleyball tournament at several high schools in the southern portion of the state and two per participant at this weekend’s state cross country meet at the Portneuf Wellness Complex in Pocatello.

Battle Basketball, which has been conducting tournaments for school-aged children for many years, have used facilities in Lewiston, Clarkston and Asotin in the past. But because of guidelines in the state of Washington, those places in Clarkston and Asotin could not be used.

The Tribune obtained a document from the group’s website detailing the protocols which were being put in place to make sure the tournament would be handled in a safe manner, per the previous Stage 4 guidelines under Little’s plan for reopening.

In the document, tournament director Holley White detailed a three-step process for keeping the tournament safe, which included working with the health department and the regional emergency manager. She stated there would be no postgame handshakes or conferences conducted afterward; a mask demand, not a request; and following the normal COVID-19 protocols of not attending if a person has any symptoms.

“Basketball cannot be played in Oregon, Washington, Nevada, California, Colorado and several other regional states,” White said in the letter. “Please, Please, Please do not ignore symptoms or try to ‘tough it out’ because you want to watch your kid play or ignore your kids symptoms because you want him/her to play. Don’t be the reason Idaho is the next state that has to shut down youth sports!”

The document also states only two fans per participant were to be allowed to watch games, with fans being allowed to come in five minutes before scheduled game time.

One thing that people might be missing is the mental health aspect of playing and being around their peers, Roy said.

“My whole deal is, as someone who has 12-year-old twin girls and a 5-year-old girl in my house, it’s about mental health,” Roy said. “The shutdown in April and May was extremely difficult on some kids. Kids who were well-adjusted and they checked all the boxes of good home life and were smart, and it was super hard on them. I feel like the mental health of kids was being severely affected, because I see it, and the kids playing is good for them.”

Roy said one of his stepdaughters was devastated the day the tournament was canceled and asked him a very pointed question.

“’I’m just a kid that wants to play basketball, why is that so hard?’” Roy said his stepdaughter asked. “That statement all by itself, that says it all. They’re just kids that want to play basketball and do what they love. To me that sums it up.”