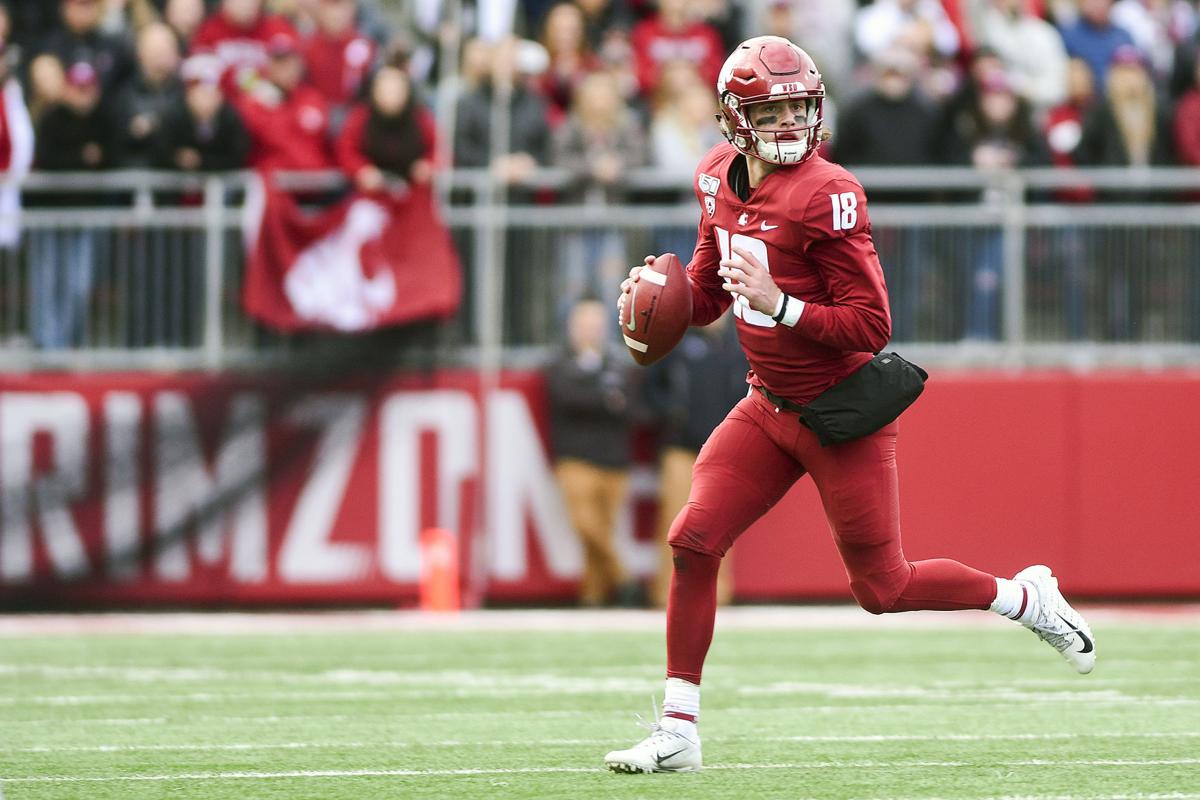 Washington State quarterback Anthony Gordon has a distinct skill set that sets him apart from others. And he owes much of that to his first love in sports — baseball. 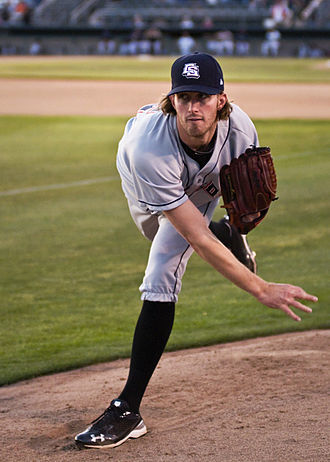 Greg Reynolds is shown pitching for the Colorado Springs Sky Sox. Reynolds not only is Anthony Gordon’s uncle, but he also is a mentor to the Washington State senior quarterback. 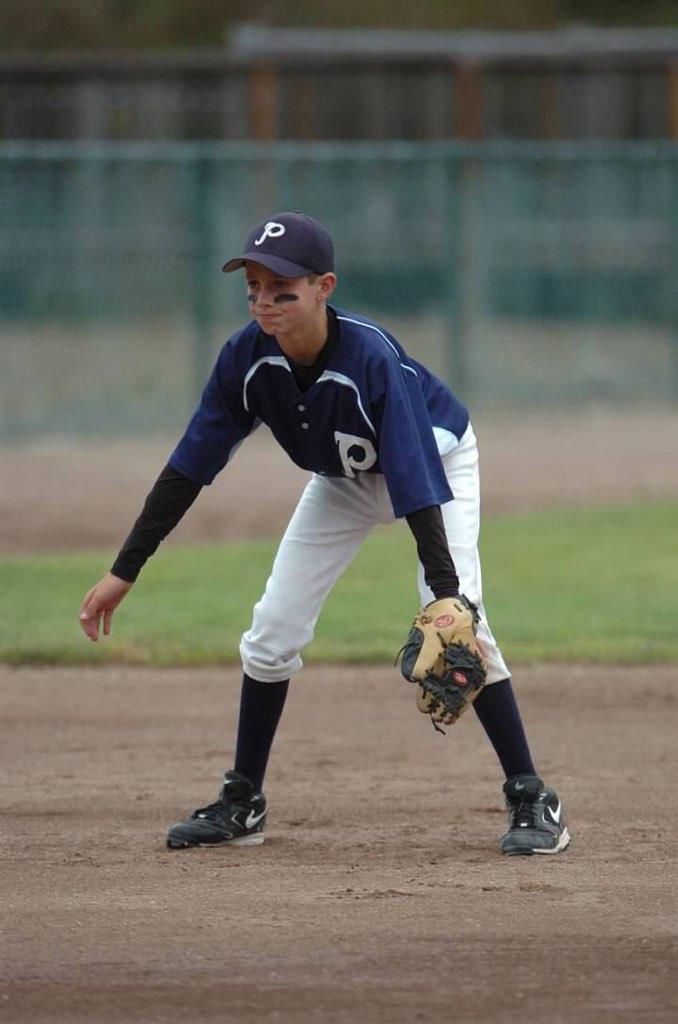 Anthony Gordon is shown as a young infielder in northern California.

Washington State quarterback Anthony Gordon has a distinct skill set that sets him apart from others. And he owes much of that to his first love in sports — baseball.

Greg Reynolds is shown pitching for the Colorado Springs Sky Sox. Reynolds not only is Anthony Gordon’s uncle, but he also is a mentor to the Washington State senior quarterback.

Anthony Gordon is shown as a young infielder in northern California.

PULLMAN — A defensive back who played against him in junior college said, “He’s got a bit of Aaron Rodgers in him.”

A former Seattle Seahawks quarterback is “mesmerized” by his quick release.

A teammate on the offensive line sometimes wants him to go easy on the trash-talk and “Dude, relax.”

Anthony Gordon presents multiple facets to the world, which might be one reason a supposedly too-skinny 6-foot-3 quarterback with an unconventional skill set is on pace to break the Pac-12 record for single-season passing yardage. It could happen in Washington State’s second-to-last game of the regular season at 6 p.m. Saturday at home against Oregon State (Pac-12 Network).

Part of what people are seeing in the eminently patient Cougar senior is a particular breed of self-confidence, what members of his family call the “Spingola swagger.” And if only a handful of his teammates even know of Gordon’s Italian background — well, that’s just another aspect of his mystique.

He didn’t play football until his freshman year of high school, largely because his father, Ryan Gordon, had absorbed a few concussions in his own career and had decided tackle football isn’t a terrific idea for young growing bodies.

Between the ages of 7 and 15, then, Anthony Gordon ensconced himself in baseball, a sport that rewards versatility and whose requisite skills, at least in his case, can be transferred to distinctly different realms.

His role model in that regard — in every regard — was an uncle, Greg Reynolds, a right-handed pitcher who was the No. 2 overall pick in the Major League Baseball draft in 2006, selected ahead of such slouches as Max Scherzer, Clayton Kershaw and Tim Lincecum.

Reynolds and his brothers, who included Ryan Gordon (a half-brother, hence the different surname), were athletic royalty at Terra Nova High School in the coastal town of Pacifica, Calif., south of San Francisco. They all were successful quarterbacks at the school, but Reynolds took success to a different level with his baseball exploits, which included two seasons at nearby Stanford.

Anthony Gordon was 8 when Reynolds was drafted by the Colorado Rockies.

“He was a stud in our hometown and everyone loved him — he was a great dude to look up to,” the quarterback said Tuesday in the game room of the Cougar Football Complex. “He went to Stanford, which is something every kid (in that area) wants to do, for academic reasons and stuff like that. So Greg was always kind of my hero.”

Reynolds, speaking by phone from California, said he prized his relationship with his nephew and tried to carve out time for him even as he pursued a pro baseball career. Before spring training every year, tutoring Gordon was also a way to get ready for the season.

He toiled in the minor leagues for two years before making his MLB debut in 2008. But traction was hard to come by, especially after an injury in 2009. He spent time with the Rockies, the Rangers, the Reds and the Padres, finally stepping away from the grind three years ago with a career win-loss record in the majors of 6-11 and an ERA of 7.01.

“For a good while, I was on top of the world,” he said. “And unfortunately, like so many stories, the game humbles you really quick. I had some injuries, and when I was healthy I wasn’t performing very well. I flew through high school and had some bumps in the road in college, but never fell flat on my face until I got to the major leagues. That was really hard to take.”

At some point during this stretch, it became obvious his nephew was a dual-sport talent. As a baseball player he pitched well, hit well and played various positions, including shortstop. The New York Mets chose him in the 36th round of the draft in 2015, seeing him as a potential corner outfielder.

But his priorities were shifting, even as the football world either dismissed him as too slender or gave him no consideration at all. Despite a successful quarterbacking career at Terra Nova, he drew no attractive four-year scholarship offers and decided to enroll at the City College of San Francisco, where his father had been a quarterback two decades earlier.

While he was passing for 3,864 yards and 37 touchdowns in leading the Lions to a 12-1 record as a freshman, a couple of traits in particular struck people. One was his tendency to carry on a running discourse with opposing defenders.

“He’s a talker, man,” said former Saddleback Junior College cornerback Darryl Wyrick, whose Orange County-based team lost to Gordon’s Rams in the 2015 California JC championship game. “Once he gets going, you can’t shut him up.”

It was nothing too personal. When the Rams assumed a lead, it was, “Look at the scoreboard.” When victory was imminent, it was, “It’s going to be a long ride back to Orange County, guys.”

That was a new twist to the Gordon/Reynolds quarterback vibe. His father and uncles had been more reserved, Ryan Gordon laughingly noted. In short, they didn’t have the “Spingola swagger,” a reference to his wife Gina’s distinctly Italian side of the family.

At Washington State, the swagger is subtle but, to teammates and opponents at least, unmistakable.

“Gordon’s got a little spark to him,” WSU offensive lineman Abe Lucas said this past Saturday after the Cougars’ 49-22 win against Stanford. “He’s a quarterback jawing with all these defensive linemen and linebackers, and I’m pulling him off, like, ‘Hey, dude, relax now, we still need you. We don’t want you in any fights or anything.’ But he definitely has that spark for us and we enjoy blocking for him.”

Greg Reynolds, who has attended four WSU games this year, has noticed this extra layer to his nephew’s on-field personality.

“I can tell you, just watching him play, that he has more belief in himself than I did in myself,” he said.

The other trait people noticed about Gordon in junior college was his quick release.

“Not too many guys I’ve played against can fling it like that,” Wyrick said. “It doesn’t give us enough time to read and react. It gives a receiver a couple of yards apart from us, so he can make a move now. It gives the offense another asset against a defense

“He’s kind of different,” he said of Gordon. “He’s got a bit of Aaron Rodgers in him.”

Not only was his release snappy, his throwing angles were diverse. He wasn’t necessarily fast, but he was slippery in the pocket and could alter his throwing trajectories as pass-rushers approached.

If anything, he’s unloading the ball more rapidly as a Cougar.

“Gordon’s release is, quite frankly, one of the prettiest, most mesmerizing releases of the football that I’ve seen in college football in a long, long while,” former Seattle Seahawks quarterback Kelly Stouffer said during an ESPN broadcast this season.

In short, from the start of his college career, Gordon looked a bit like a baseball player on the football field. He evoked a shortstop firing sidearm to first base, an outfielder heaving to home plate, a catcher gunning down a baserunner at second.

“Being a middle infielder, getting the ball off my hand really fast, kind of shaped my philosophy as a quarterback,” Gordon said in an ESPN interview this year.

To no one’s surprise, he played for the City College baseball team as a freshman.

“He was probably the best baseball player, talent-wise, we’ve had since I’ve been here,” said City College baseball coach Mario Mendoza, who was an assistant at the time. “He didn’t have the greatest year here. He came in late, he was still handling football stuff. He mostly did it with natural ability.”

When Mendoza watches him play football, “I see the shortstop that I recruited out of high school,” he said.

Gordon spent only one year at that school. Washington State had lost quarterback Peyton Bender to an academic issue and eventually signed Gordon to replace him. He redshirted a year and spent two seasons as a reserve, stuck behind future NFL players Luke Falk and Gardner Minshew, before finally getting his chance this season.

It really wasn’t until he ascended to the major-college level that, in his heart, Gordon left baseball behind. During the preceding years, watching his uncle’s baseball career had played a role in his drawn-out farewell to the sport.

“Seeing him as a can’t-miss prospect, second pick in the whole draft, in the same draft as Tim Lincecum, Clayton Kershaw, all of them,” Gordon said, “and then to see his career go down and those other players’ go up, I was like, ‘Wow, if that could happen to him’ — I’m nowhere near as talented as he was in baseball. So when football came to me the way it did, I was quick to jump on it.”

Reynolds, after retiring from baseball, returned to Stanford and secured a degree in economics. He’s now looking into a career in firefighting, which is big in his family. In fact, Gordon, who will get his degree in social sciences this semester, might want to pursue firefighting in his post-football life.

That would maybe give Reynolds another chance to mentor his nephew.

“I think from a young age, when he saw me doing really well and being on top of the world,” he said, “and then all of a sudden having some bumps in the road, I think it really resonated with him, and made him aware that it’s not all a Cinderella story out there. You really have to earn everything that you get.

“I talked to him about that, about how difficult it is to fail for the first time. It’s one of those things you can never take for granted. You always have to keep pushing to improve, and I think he’s definitely taken that to heart.”