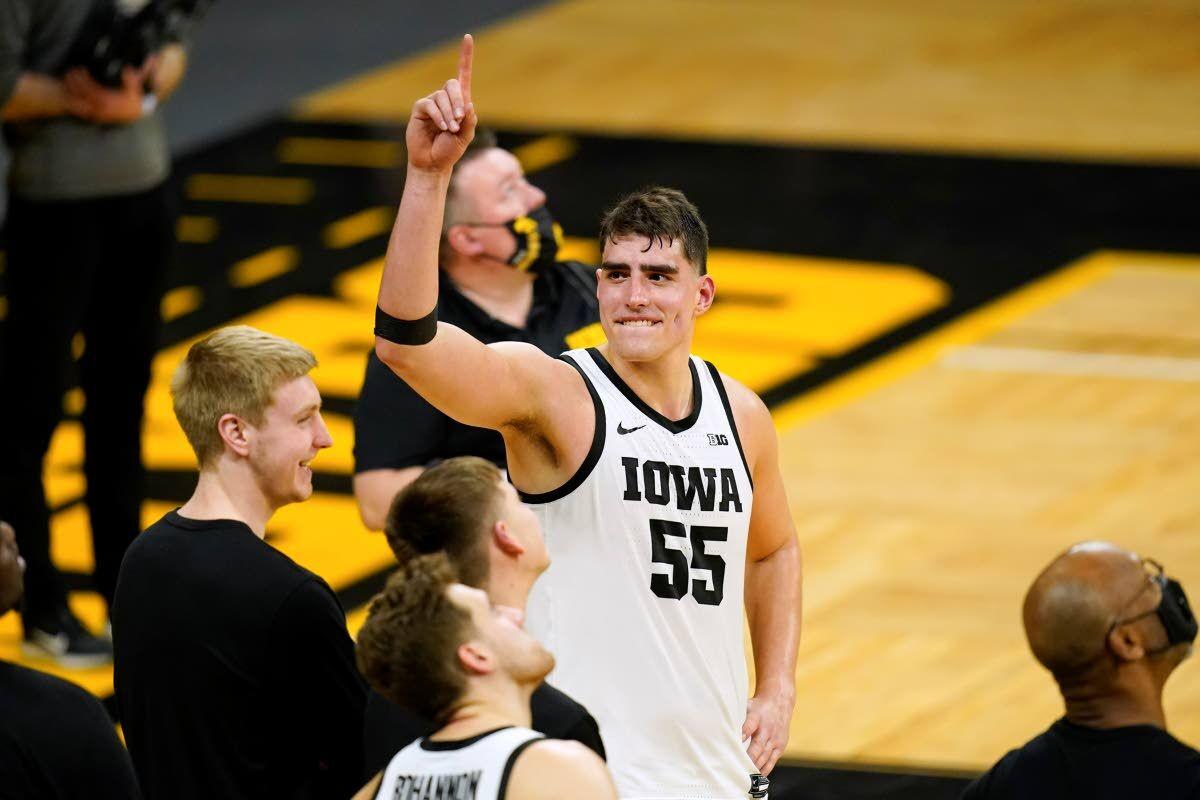 Iowa center Luka Garza is one of college basketball’s best players. He got there through hard work instilled by his father, former University of Idaho player Frank Garza, along with his grandfather, former UI assistant James Halm, and his godfather, former Vandal head coach Bill Trumbo. 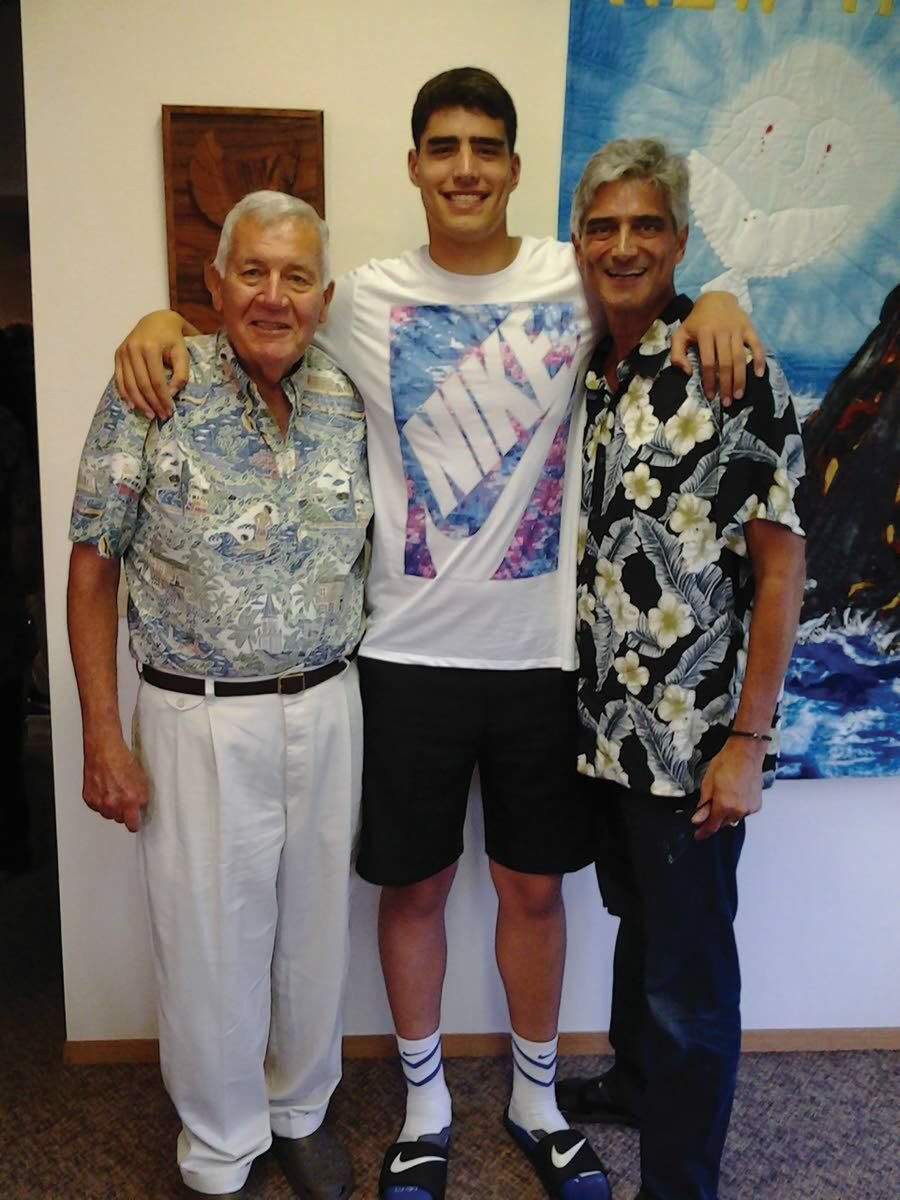 University of Iowa standout forward Luka Garza, center, stands next to former Idaho men's coach Bill Trumbo and his father, Frank Garza. Frank Garza played for the Vandals in the mid-1980s with Trumbo, who is Luka Garza's godfather, as coach.

Iowa center Luka Garza is one of college basketball’s best players. He got there through hard work instilled by his father, former University of Idaho player Frank Garza, along with his grandfather, former UI assistant James Halm, and his godfather, former Vandal head coach Bill Trumbo.

University of Iowa standout forward Luka Garza, center, stands next to former Idaho men's coach Bill Trumbo and his father, Frank Garza. Frank Garza played for the Vandals in the mid-1980s with Trumbo, who is Luka Garza's godfather, as coach.

College basketball is full of multi-generational legacies, far-reaching coaching trees and seemingly endless connections that, in one way or another, eventually link one school, player or coach to another. We’ve all heard the accounts of Coach A and his playing days at School B, and how 30 years later, School B is coached by Coach C, who formerly assisted Coach A, and so on.

Those types of tales make for fun storylines during the NCAA tournament. How about this one: Luka Garza and his ties to the University of Idaho.

The University of Iowa star’s unlikely association with the school in Moscow traces back to his grandfather, godfather and dad, who simultaneously represented the Vandals men’s basketball program in the 1980s. They’ve also all played major roles in helping Garza become one of the best college basketball players in America.

Garza’s godfather, the late Bill Trumbo, was Idaho’s head coach from 1983-86. His assistant was Garza’s grandfather, James Halm. And Garza’s father, Frank Garza, played two seasons at Idaho, leading the Vandals in scoring and rebounding as a senior in 1985.

Luka Garza’s list of accomplishments is extensive. The senior recently was named the Naismith men’s college player of the year, Associated Press men’s college player of the year, is a two-time first-team All-American, two-time Big Ten Conference player of the year and Iowa’s all-time leading scorer, among other feats. At 6-foot-11 and 265 pounds, his inside-out offensive abilities and efficiency have been marveled at by basketball enthusiasts. He was called “probably the most unstoppable force in college basketball” by CBS analyst Jim Jackson before Iowa’s second-round NCAA tournament game against Oregon. His No. 55 jersey will be retired by Iowa, to be displayed for all to see at Carver-Hawkeye Arena.

When that day comes, it’ll be as much a tribute to Luka Garza’s play as it will be to those who have helped him.

Especially Frank, who has been his son’s No. 1 trainer and advocate, and has attended almost all of Iowa’s games the past four years. He too donned No. 55 when he played for the Vandals.

“I’m extremely close to my dad,” Luka said. “I grew up and my dad was really my role model. I wanted to grow up and be like him.”

Frank, who was listed at 6-6, admittedly was not a gifted athlete, but was a successful basketball player because of his shooting abilities, fundamentals and effort. He was one of Idaho’s best players his senior season, averaging 14.3 points and 6.1 rebounds per game, shooting a hair under 50 percent from the field.

And although the 3-point line was not yet uniformly implemented across college basketball, it existed in the Big Sky Conference, and Frank Garza made 42.6 percent of his tries from distance as a senior.

“He’s not a talented athlete, but he’s a smart kid,” Trumbo told UI’s student newspaper, The Argonaut, in 1983. “Everybody on the team probably has more foot speed than Frank. Jumping, shooting, they’re just some of God’s gifts, but some guys work harder and Garza’s one of them.”

Frank has passed those principles onto Luka, who possesses some of the same athletic deficiencies. A video on Frank’s Twitter page shows Luka finishing 50 shots in a row, all from right under the basket, using different post moves and techniques — a variation of the popular Mikan drill. In many other clips, Luka drains several deep 3s in a row. The father and son have completed workouts like those and many others through the years, forging a bond that has earned press in Iowa and beyond.

The training sessions helped the NBA prospect make 58 percent of his 2s and 44 percent of his 3s this season, and he’s quick to point out his senior-season 3-point percentage topped his old man’s.

“I just brought back what Trumbo taught me, what I learned from my coaches, from my pedigree,” Frank said. “... To see all that hard work pay off is a very satisfying feeling.”

Frank went to high school in Anacortes, Wash., and began his college basketball career at Skagit Valley College in nearby Mount Vernon. Halm coached Frank at Skagit Valley, and the player followed the coach to Santa Rosa Junior College in California, where Trumbo was the head coach. Halm joined Trumbo’s staff there after Skagit Valley defunded its basketball program.

Trumbo had great success at Santa Rosa, posting a .757 winning percentage and claiming seven conference championships in nine seasons. He was hired to replace Don Monson at Idaho in 1983, two seasons after Monson guided the Vandals to the Sweet 16.

Trumbo hired Halm to be his assistant in Moscow and, again, Frank followed. His favorite memories of his time at UI include the Vandals’ 21-point win against Washington State in 1984, a triple-overtime loss to Washington in ’83, and the lifelong friendships he made with Vandal legends Dan O’Brien and Ken Hobart.

“I enjoyed it,” Frank said. “The people were great.”

Frank, Halm and Trumbo stayed connected until Trumbo’s death in 2018. Luka didn’t know Trumbo well until he was in high school, at which time he spent parts of a few summers training with him in Hawaii. He credits the coach with pushing him to commit himself to basketball — and other areas of life — more than ever before. He shed 30 pounds in a month during one visit and was baptized during another.

“I was still young, so he was monitoring everything I was doing, making sure I always made the bed and cleaned all my clothes,” Luka said. “When I was at the dinner table, I’d have to sit right. He’d count the amount of times I’d chew.

“He was really into building me into a person that was balanced in different ways.”

Trumbo died before he got to see Luka blossom into the player he is today. But the work he put in, along with Halm and Frank — a few former Vandals — is continuing to shape the transcendent talent.

And it’ll all be preserved forever when Luka’s Iowa jersey is immortalized above his college home court.

“Just to see it up there, 55 Garza, it’s going to be me looking at a lot of different people, a lot of coaches, a lot of family that have pushed me, a lot of teammates that have helped me get to this point,” Luka said. “The 55 up there is going to be awesome for myself and my dad, because he knows why I wear that number.”