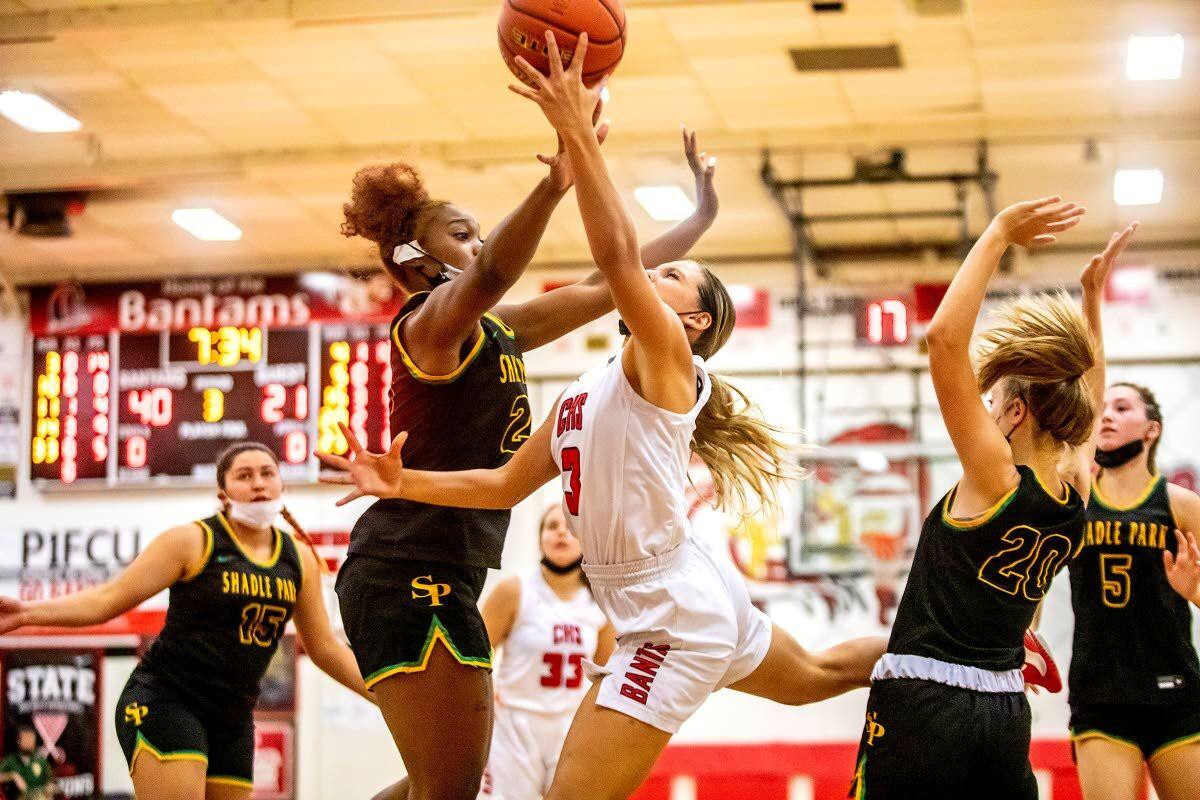 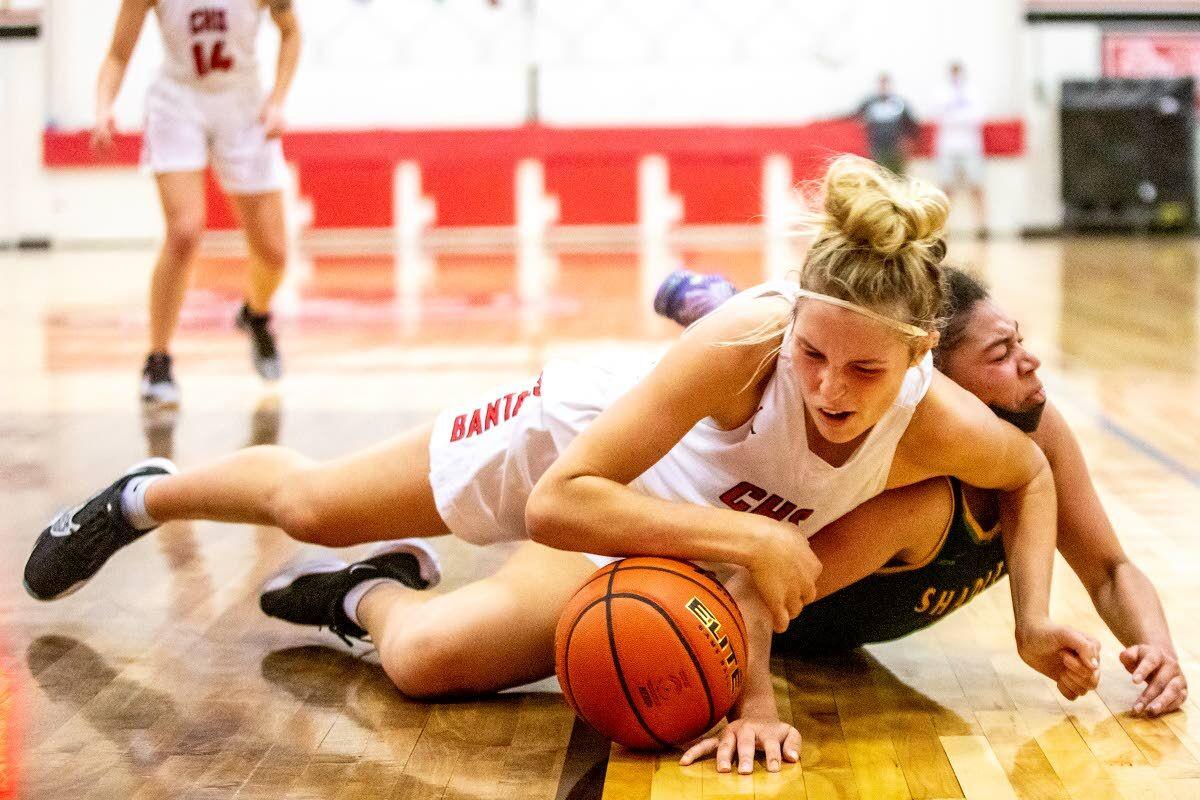 Clarkston Maggie Ogden falls over Maliya Asadi as they go in to wrestle for the ball. Clarkston defeated Shadle Park 77-36 in the first round of the district tournament in Clarkston on Tuesday.

Clarkston Maggie Ogden falls over Maliya Asadi as they go in to wrestle for the ball. Clarkston defeated Shadle Park 77-36 in the first round of the district tournament in Clarkston on Tuesday.

As it has done throughout the season, the Clarkston girls’ basketball team showcased every weapon it has in its deep arsenal as it overpowered Shadle Park 77-36 in a Class 2A Greater Spokane League district playoff game Tuesday.

With the victory, the top-ranked Bantams (13-0) advance to the district championship game, which will be at 6 p.m. today against West Valley at Kramer Gym.

Eight different Clarkston players were on the board with at least two points by halftime, and the Bantams answered every run the Highlanders (6-6) threw their way.

“All year long, when a team has tried to put a run on us, we’ve had a great response defensively,” Clarkston coach Debbie Sobotta said. “Something clicks on for the girls and they get to their defensive responsibilities and slow them down.”

Clarkston jumped out to an early 8-0 lead behind a pair of pull-up 3-pointers from senior floor leader Ashlyn Wallace, who turned in 23 points, five rebounds, seven assists and zero turnovers, and steadied the offense throughout.

Junior Erika Pickett followed, causing problems in the post for her defenders with her footwork.

She scored 15 points and corralled nine boards, with five of those coming on the offensive end. Pickett, along with senior Sam Chatfield (nine points, four rebounds) and Maggie Ogden (10 points, two steals) used their height to bully Shadle Park into high-percentage looks.

Defensively, the Bantams didn’t miss many reads and forced the Highlanders into difficult, out-of-rhythm shots.

The Highlanders steadied themselves early as senior Izzy Boring hit a 3 to close the Clarkston lead to 11-6 with under three minutes left in the first. However, the Bantams minimized the damage and went on a 6-0 run to lead 17-6 after one.

Boring did all she could on the offensive end for the Highlanders, scoring 17 points, 13 coming in the first two quarters in what turned out to be her final game for Shadle Park.

“Izzy is an all-league type player and she’s our most inspirational player. We love everything about her — she always brings it,” Shadle Park coach Scott Kelley said. “We’ve won six games (in each) of the last two seasons. Before that, we had won about six over the last eight years. … We’re making progress and she’s been a big part of that for us.”

Clarkston owned a 40-21 lead at intermission and stretched it to 46-21 in the opening minutes of the third, before the Highlanders made another push as they tried to claw back into the game.

Boring converted a layup on the break while being fouled. She missed the freebie, but hauled in her own miss and scooped in another in the painted area to complete an 8-0 run as Shadle Park hung around.

The Bantams put together a 10-2 run to reclaim control and headed into the fourth with a sizable 56-31 advantage, then outscored the Highlanders 21-5 in the fourth.

“For the first three quarters I thought we played hard,” Kelley said. “We might have ran out of gas. (Clarkston) is just so talented one through 12 that it’s very difficult to keep up with them. They’rer a fun team to watch, except when you have to play them.”

As Clarkston is set to take on the Eagles of West Valley for the league crown today, the Bantams will attempt to put on one final show and complete a so-far undefeated season.

With the condensed Washington state basketball season, there will be no Yakima SunDome trip for the Bantams this year. And with a loaded roster to boot, many may wonder just how far the Clarkston girls could go if given a full postseason.

“We have to make the most of it,” Sobotta said. “How we’re looking at is that we have the opportunity to play our last game at home in front of our home crowd. Even if we don’t get a state (tournament), we appreciate that we have worked hard enough to play our last game in front of our fans. We’ve been trying to make the most of the season, and the girls have been (too).”