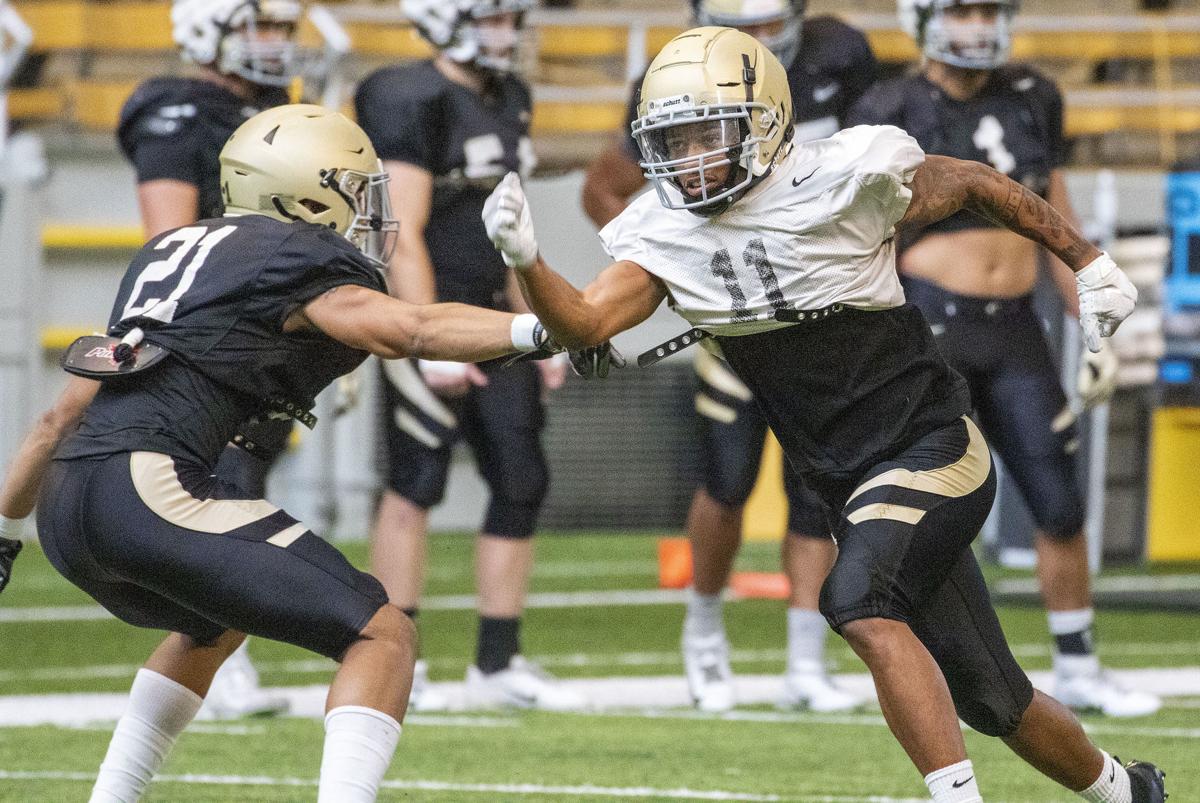 Idaho wide receiver DJ Lee, right, runs during a practice on Tuesday at the Kibbie Dome in Moscow. 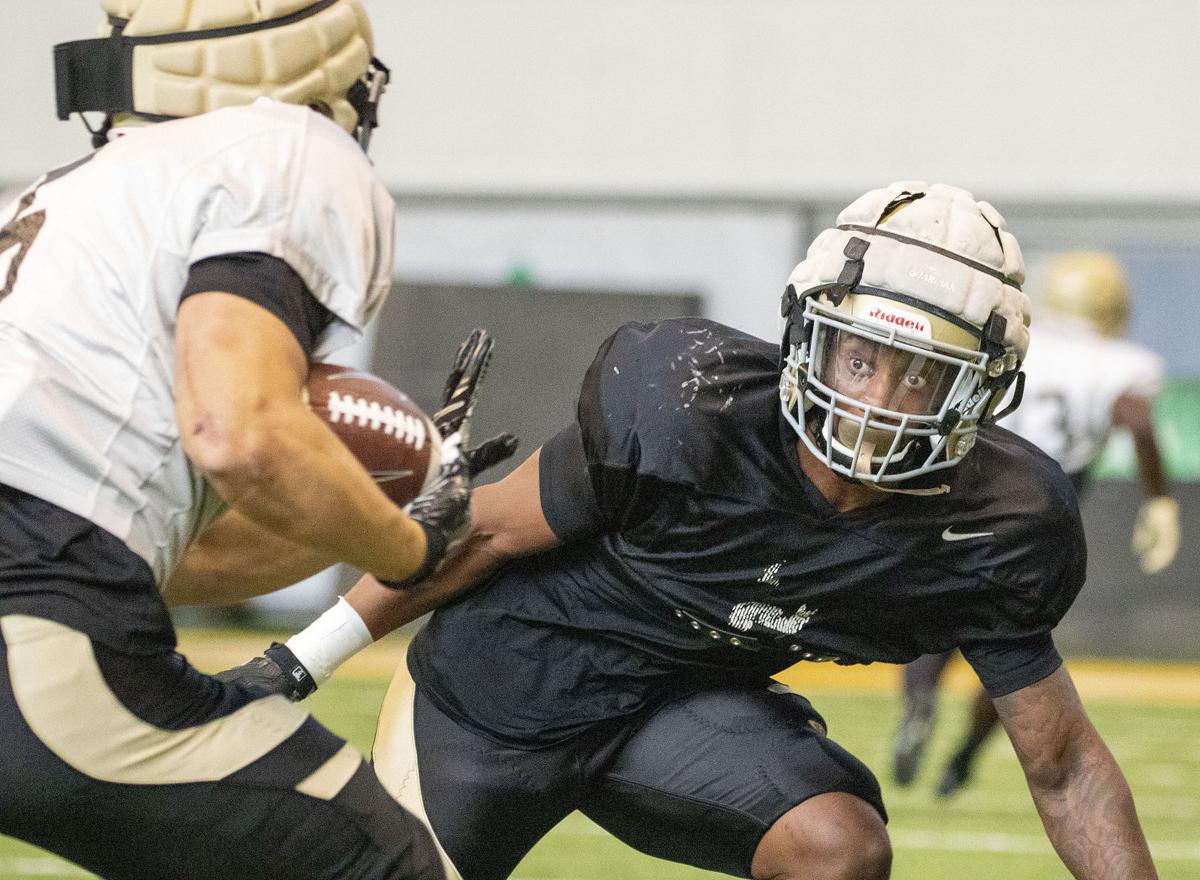 Idaho defensive back Davontae Ginwright brings down a ball carrier during a practice on Tuesday at the Kibbie Dome in Moscow. 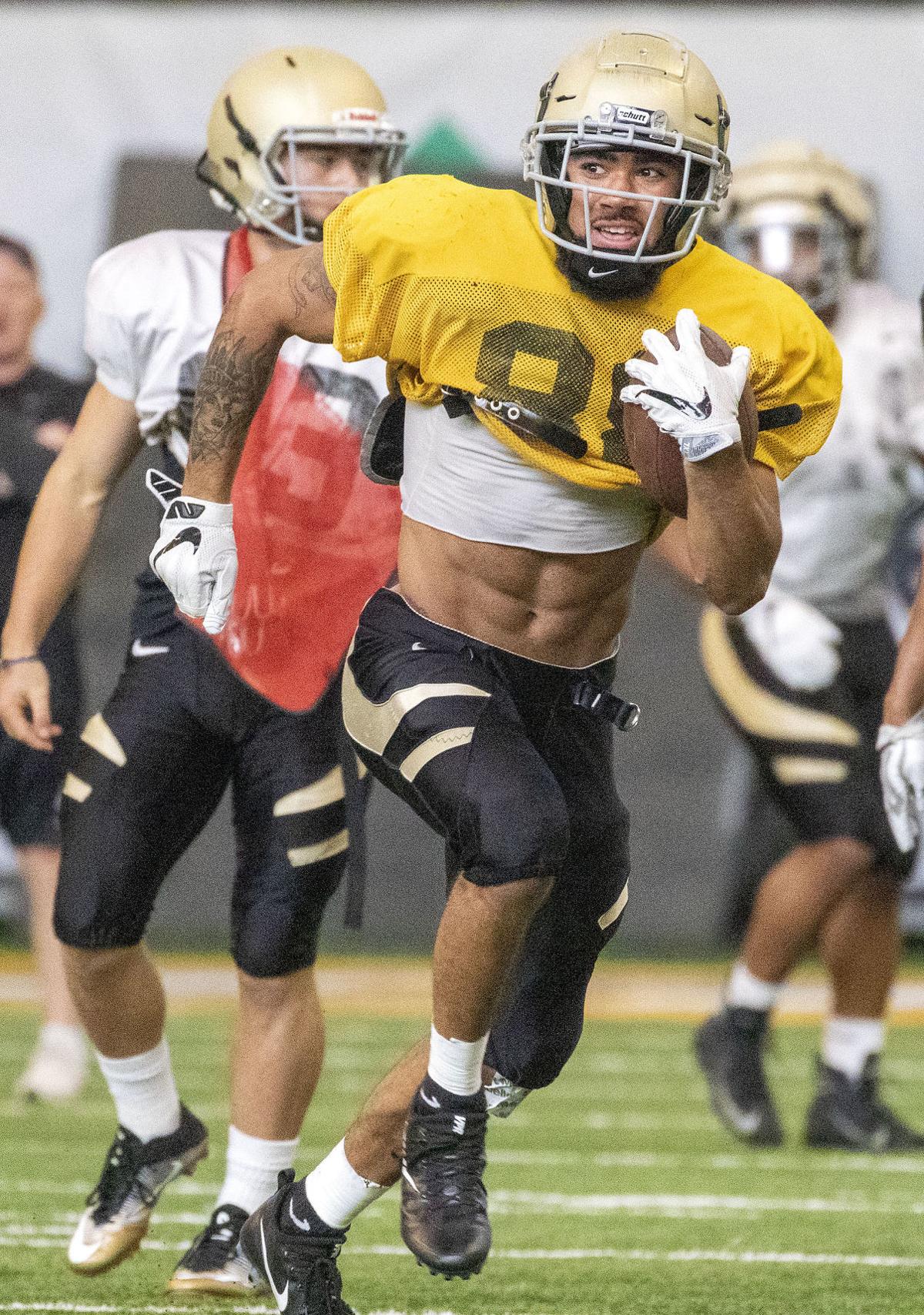 Idaho wide receiver Jeff Cotton runs downfield during a practice on Tuesday at the Kibbie Dome in Moscow. 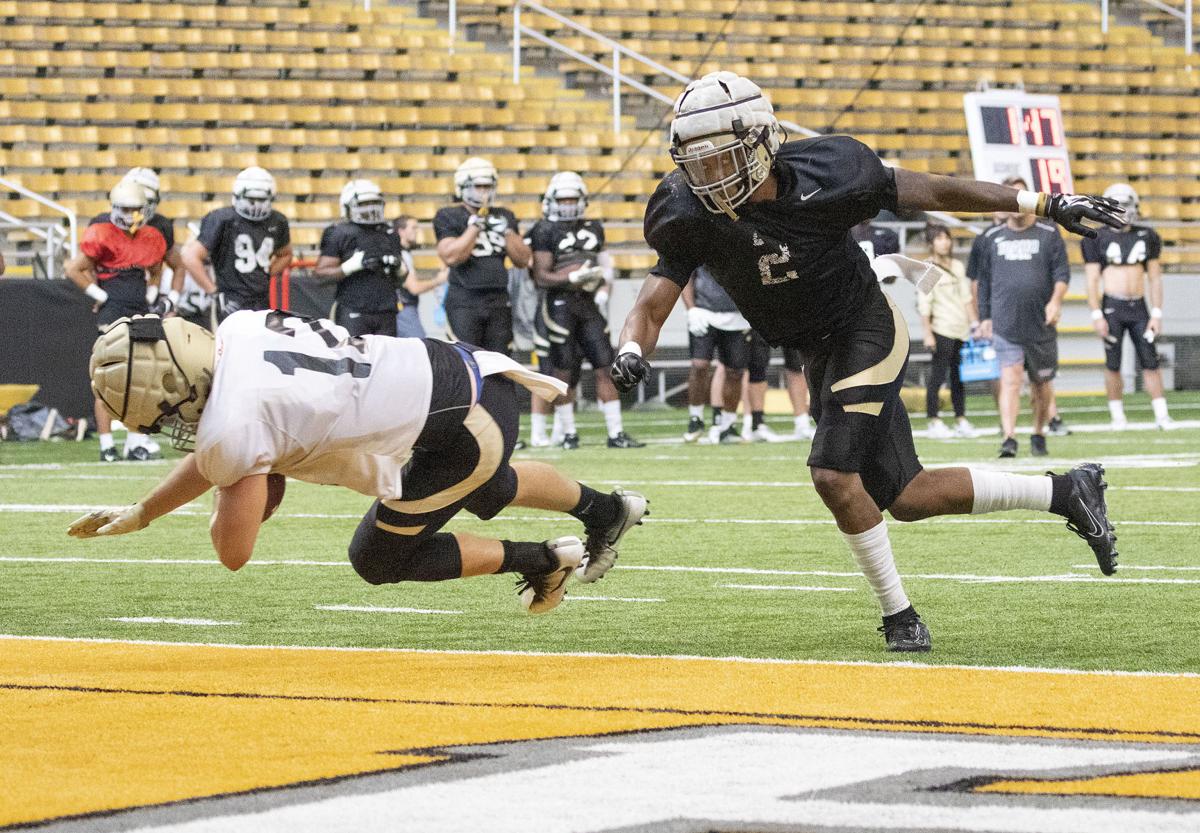 Idaho defensive back Davontae Ginwright, right, brings down tight end Connor Whitney r during a practice on Tuesday at the Kibbie Dome in Moscow.

Idaho wide receiver DJ Lee, right, runs during a practice on Tuesday at the Kibbie Dome in Moscow.

Idaho defensive back Davontae Ginwright brings down a ball carrier during a practice on Tuesday at the Kibbie Dome in Moscow.

Idaho wide receiver Jeff Cotton runs downfield during a practice on Tuesday at the Kibbie Dome in Moscow.

Idaho defensive back Davontae Ginwright, right, brings down tight end Connor Whitney r during a practice on Tuesday at the Kibbie Dome in Moscow.

MOSCOW — Late last week, Idaho football coach Paul Petrino was asked if any particular fall-camp rep had been imprinted into his mind yet.

Ironically, it arose from a previous lowlight.

The Vandals were practicing a post route against a one-high safety — a replica of the play Montana receiver Samuel Akem burned UI on last season. Then, no one was home. This time, 6-2 Western Michigan transfer Davontae Ginwright, playing deep, “didn’t bite,” and picked it.

“He’s long, he gets in the passing lanes, he tips things,” Petrino said. “Most importantly, when he’s deep-third, he’s deep-third. He doesn’t let people get behind him.”

At free safety, senior Ginwright and 6-1 junior Tyrese Dedmon have split time, but just recently, it was revealed by Petrino that Ginwright has a little edge — he covers ground rapidly and boasts a well-versed background from his time with the Broncos, a 13-1, New Year’s Six team in 2016, Ginwright’s breakout season.

“We kinda had the same schemes, they were just different names,” said Ginwright on the new-program process. “It’s really just sit back and watch, learn the terminology.”

Aside from quarterback, high safety is one of a number of contested Vandal position groups left to shore up with the clock to game time at just over two weeks — quick tackle and X receiver are also previewed here.

Even if he doesn’t start, Dedmon will undoubtedly play. He’s also currently the backup down safety to sure-fire starter Satchel Escalante, and he’s been getting first-team reps in bunches with Escalante sidelined via a minor ankle injury.

At the preferred position, up high, Dedmon said he and Ginwright mirror each other in a number of ways. They’re lengthy and clever football players, with wide coverage spreads, swift downhill breaks and are deft at wrapping up second-level runners — that was a problem last year.

“Length and speed; I’m pretty confident in my speed,” said Dedmon, a reserve who showed flashes in ’18. “We both come down and tackle pretty good, good run-fitters. … We’re pretty even, we just work with each other as much as we can.”

Dedmon says having a main rotation of all 6-plus-footers has challenged the precision of UI quarterbacks. And when a pass-catcher or runner has broken through, missed tackles have been few. The angles are lower and more precise, as seen Tuesday at the Kibbie Dome.

“Everybody, we all preach, ‘No missed tackles,’” said Dedmon. “If we miss, then it’s a touchdown. We’ve gotta be perfect.”

THE QUICKEST OF THE HOGS — At Air Force Prep last year, UI freshman tackle Noah Gunn squared off with a few of the nation’s top jucos, the power-five producers.

That slate featured four-star recruits and — as is the academy’s approach — a bunch of running, cuts, pulls and tough blocks for the Coeur d’Alene High grad, who decided late last year to accept a scholarship from UI and move closer to home.

Despite his missing most of spring with illness, it’s a developmental leg up, and it’s helped morph Gunn into a competitor vying for a starting quick tackle role on the Vandals’ offensive line.

“I improved mostly on lateral runs, getting out in space and getting tacklers to the ground,” said Gunn, who’s neck-and-neck with 6-3, 290-pound senior Sean Tulette. “For my size, I can move really well. A lot of people are deceived by it; they see me as a bigger dude. I can still move like I did when I was smaller.”

Athleticism: It was the first and most notable quality Petrino observed in the long-armed, 6-3, 315-pounder, who’s retained his Air Force springiness despite bulking way up.

Gunn’s position coach, offensive coordinator Kris Cinkovich, has been largely pleased with the progressions. Gunn’s gotten in D-I shape, and his punch off the jump and ever-moving, balanced feet stand out, the latter attribute Cinkovich pointing to as key.

“That characteristic always does you well. (Without it), you’ll either get walked around or knocked backwards,” Cinkovich said.

Dissimilarly, Tulette’s been around the UI block. The two-year starter — at quick tackle, then center, now back outside — has made headway in size consistency (up 10 pounds from ’18), boosting his “ability to move people,” said Cinkovich.

On that note of size: Tulette dons No. 52 now, his desired digits that were promised only if he could stay above 280 pounds (he sported 72 before).

Of all, the former JC transfer’s game is predicated on pass protection, where he’s been intuitive in deciphering D-line movements and placing himself, utilizing a “balance, where he can carry that size but his conditioning will hold up,” Cinkovich said.

Owing to the brawn, Tulette’s been a bulldog on the whistle, and could be seen Tuesday stalemating edge rushers in the ground game, too.

Competition aside, Gunn said the senior — and tackle Edwin Grande, out for the time being with a tweaked hamstring — have been crucial in the development process.

“They help me a ton — little nitpicky things,” Gunn said. “I’m super grateful to have those two senior mentors to look after.”

A ONCE-DB AND ONCE-QB VYING FOR X — Four years after arriving at UI out of the Sunshine State, senior Jante Boston might finally have his chance to shine.

And after four years prepping as a quarterback in Champaign, Ill., big-play sophomore DJ Lee has the hands and finesse, and is solving the puzzles elsewhere.

The two are battling it out for X, to complement Z Jeff Cotton and slot-man Cutrell Haywood.

For Boston, it’s been an injury-plagued road, also defined by position changes — from receiver, to DB, back to receiver — and flip-flopping of his place on the depth chart due to breakout teammates.

Over the span, he’s been absorbing the intricacies.

“I’ve been here a looong time, so I understand the offense, I understand the concepts,” said Boston, UI's only remaining player who saw action in 2015. “I probably learned how to read coverages more than anything.”

As for that time in the secondary, Boston said it makes practicing especially pleasant, since he knows all of UI’s schemes. In a game setting, everything slows. Boston speaks swiftly and expertly of the “keys” a corner might give: Their placements marking protections; their eyes signaling blitzes and protections, and their lower bodies giving away when they initiate a backpedal and how they'll turn.

On the turf, younger players have been known to seek Boston for critiques on footwork and route running.

“A lot of things when I don’t remember, or things I struggle with, (Boston) helps me,” said Lee, who became popular in UI’s game against Idaho State last year, when he nabbed a helmet catch in the back-corner of the end zone. “Even plays we haven’t ran in years, he’ll bring them into meetings.”

Nicknamed “sweet feet” by teammates, Boston is confident in his route discipline. He’s “more quick and agile than fast,” and can get a sideline toe-tap down with the best of them. But like Haywood, Boston says his top upgrade might be his no-fear blocking mentality.

Lee, a Z last year, has been getting comfortable with press jams and taking strings of snaps with little rest. Adapting in those areas was of the utmost challenge to Lee, but Cinkovich has commended his improvements through repetition in both regards.

“I’m not the fastest, not the strongest, so I have to have some kinda finesse,” said the 6-foot Lee, who showed explosive potential last year, ending with 199 yards on 14.2 per grab. “I use a lot of double moves, I try to do trickery more than anything.”

He might be selling himself short on the speed — Haywood's mind went to "speed" first when asked what sets his fellow sophomore apart. Lee's been a versatile target in the passing game, a lot of his damage coming from his deftness for cutting and entirely changing direction on a dime.

He’s particularly deadly on hitches or comebacks, when a corner plays too close, then finds himself five yards away.

With a hair of an edge, according to Haywood and Cotton on Saturday, is Boston. Yet it could flip any day.

PRACTICE NOTES — Nick Romano has been steadily rising up the running backs depth chart, and he made another good case for first-team reps Tuesday when he hauled in a high-point, back-corner touchdown draped in the defense off a play-action Mason Petrino rollout. ... Cinkovich said strong tackle Logan Floyd has seen time at center, just because the coach wants "the most talent we can get on the field." ... Tuesday was one of the offense's best sessions, highlighted by a mess of chunk gainers, a trend Cinkovich is glad to see considering UI's been "devoid of those recently."