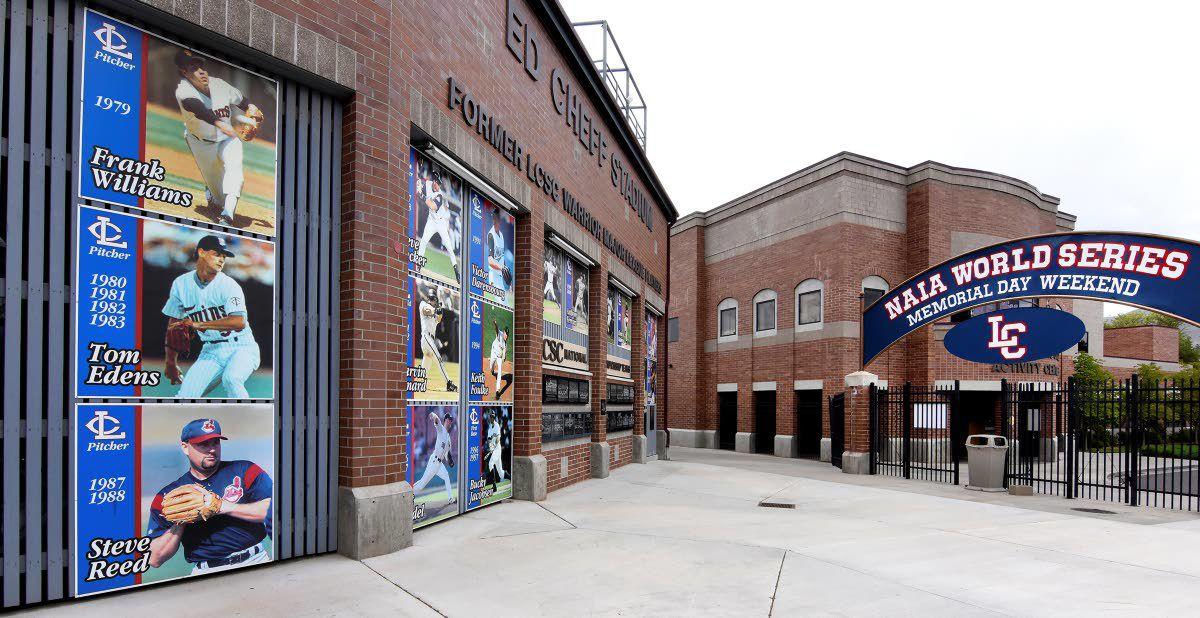 A lifesize display of baseball cards greet fans at the entrance to Lewis-Clark State College’s Harris as a testament to the numerous players who played at the college before earning a call-up to the major leagues. In total, 16 players have earned the opportunity to play in Major League Baseball after their stints at LCSC. 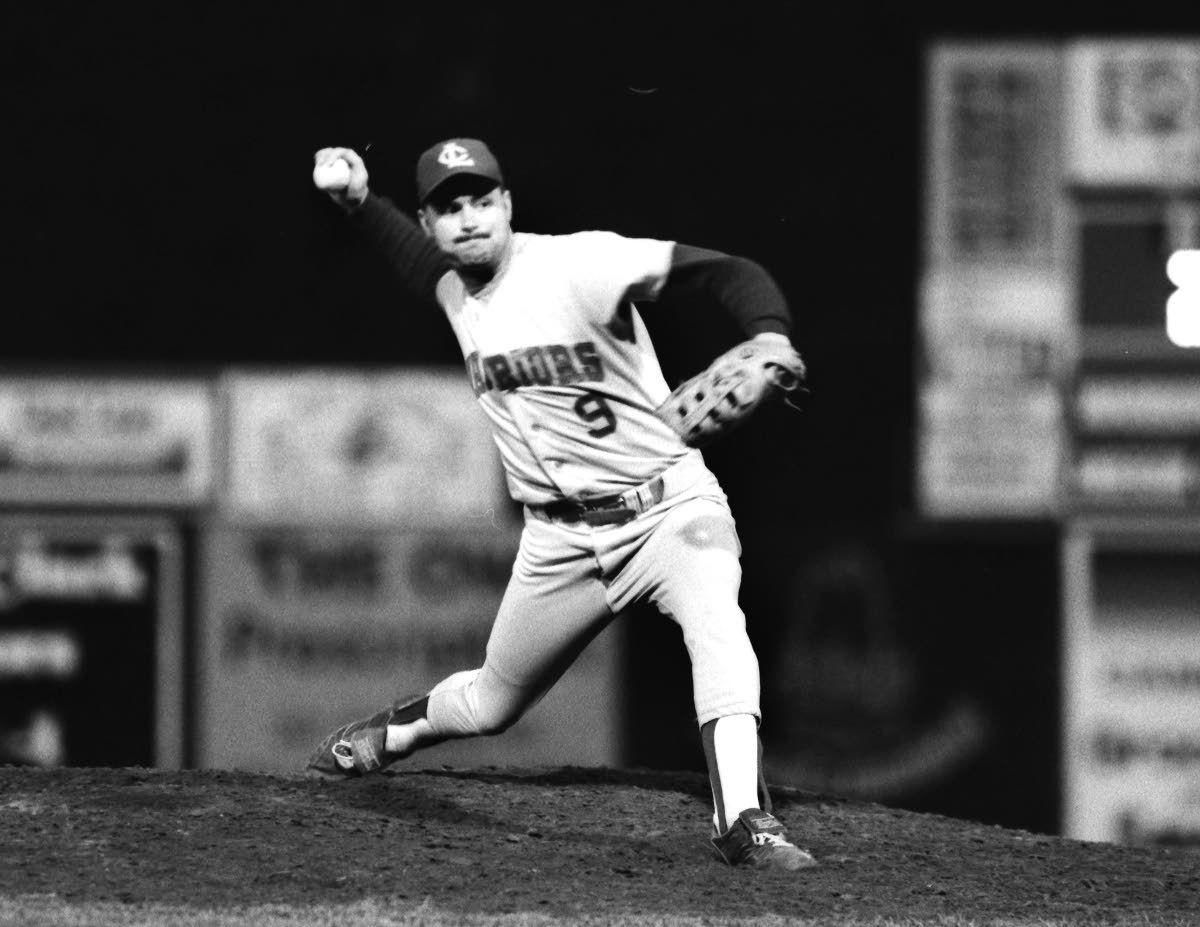 A lifesize display of baseball cards greet fans at the entrance to Lewis-Clark State College’s Harris as a testament to the numerous players who played at the college before earning a call-up to the major leagues. In total, 16 players have earned the opportunity to play in Major League Baseball after their stints at LCSC.

In the long and illustrious history of the Avista NAIA World Series, a total of 132 former players have went on to have either a playing career or a managerial career in Major League Baseball. Some of them have notched their names in the history books of the sport. Some have become more of an afterthought, or an asterisk.

In doing a deeper analysis of the roster of players who have played at the sport’s pinnacle at the small-college level and have gone on to play on the biggest stage they could, several definitely have interesting stories.

Take, for example, the case of the only player ever to compete in four NAIA World Series and who moved onto to play in the majors, Greg Legg. The former Southeastern Oklahoma State University shortstop, who played for the Savages from 1979-82, was drafted in the 22nd round of the MLB draft and didn’t really amount to much in the majors, only playing in 14 games between 1986-87 for the Philadelphia Phillies. He batted .409 for his career with just one RBI. Legg mainly was a minor leaguer for the bulk of his 13-year career, spending it all of it in the Phillies’ organization. After retiring from the game in 1994, he became a coach in Philadelphia’s farm system, and was manager of the Double-A Reading Fighting Phils twice (2002-04, 2017-18). Legg is third on Reading’s all-time wins list with 338. He currently is a coach for the Phillies’ Triple-A affiliate, Lehigh Valley, based in Allentown, Pa.

Legg was an All-American twice and Southeastern Oklahoma State went 209-40 in his four-year career.

Four other players played in the Series three times and went on to major league careers. Johnathan Sanchez is the only one of the five players who have competed in either three or four NAIA World Series with a championship ring with a major league team, as he achieved the feat with the 2010 San Francisco Giants. Sanchez, a left-hander, had a decent MLB career after being drafted in the 27th round out of Ohio Dominican. The 6-footer finished with a 39-58 mark spanning eight seasons.

He put his name on the map when he threw the 262nd no-hitter in major league history, blanking San Diego 8-0 on July 10, 2009. He struck out 11 in the game. The only blemish came in the top of the eighth inning, when Chase Headley grounded a ball weakly in the hole at shortstop, and third baseman Jose Uribe committed an error on the play. He almost lost the no-hitter in the ninth, but Aaron Rowand made a leaping grab that robbed pinch-hitter Edgar Gonzalez.

That next season, he went 13-9 with a 3.07 ERA in 34 regular-season games, 33 starts. He pitched in Game 3 of the World Series, only going 4ž innings and being saddled with the loss in a 4-2 decision against Texas.

Sanchez, however, was never the same after that season. He won five games during the next three seasons and eventually never got back on a major-league roster after an April 2013 appearance for Pittsburgh. His last stop was with Saraperos de Saltillo of Mexican League in 2019. The 37-year-old went 8-6 with a 5.20 ERA in 22 starts.

Brock, who was a six-time National League All-Star and eight-time NL stolen base champion, played in the 1964, 1967 and 1968 World Series with the Cardinals winning the title in 1964 and 1967. Washburn played with Brock in 1967, was with the Cardinals in 1968 when they lost to the Detroit Tigers in seven games, then pitched for the Cincinnati Reds when they lost to the Baltimore Orioles in the 1970 Series. Zobrist appeared in three different World Series with three different teams: the Tampa Bay Rays (2008), the Kansas City Royals (2015) and the Chicago Cubs (2016). Zobrist won titles with the Royals and the Cubs.

Brock won the NAIA title with Southern University in 1959, Washburn was on the 1960 Whitworth NAIA championship team and Zobrist played in the NAIA Series here in Lewiston in 2002 and 2003 with Olivet Nazarene.

The only MLB manager to play in the NAIA World Series is Nick Leyva. who led the Philadelphia Phillies from 1989-91, winning 148 games. Leyva played for La Verne in the 1975 NAIA World Series.

There have been a total of 16 former Lewis-Clark State College players who played in the Series who eventually went on to play at least one game in the majors. The first player was Frank Williams, who made his MLB debut with the Giants on opening day in 1984. The 11th-round draft pick of the Giants, pitched for six years with three different teams, including the Reds and the Tigers, mainly as a middle reliever. In his only career start, in his rookie season, He threw a complete-game shutout. Williams finished with a 24-14 career record and a 3.00 ERA.

Pitcher Steve Reed is one of nine former LCSC players to play in two NAIA Series and play in the bigs. The middle reliever bounced around with seven teams in a 14-year career in MLB, spending seven years with the Colorado Rockies and four years with the Cleveland Indians. He finished with a 49-44 record with 18 saves in 833 games pitched.

Seth Brown is the latest Warrior to make it to the bigs. He was called up on Aug. 26, 2019, by the Oakland Athletics and played in 26 games as they went on a run to a playoff berth. An outfielder, the 19th-round selection in the 2015 draft hit .293 with 13 RBI and he hit two triples in a Sept. 3 win against the Los Angeles Angels.

NAIA Series players who made it to the majors

Here is the list of all 132 players that have played in the Avista NAIA World Series and in Major League Baseball (ordered chronologically by the year the player first participated in NAIA event):