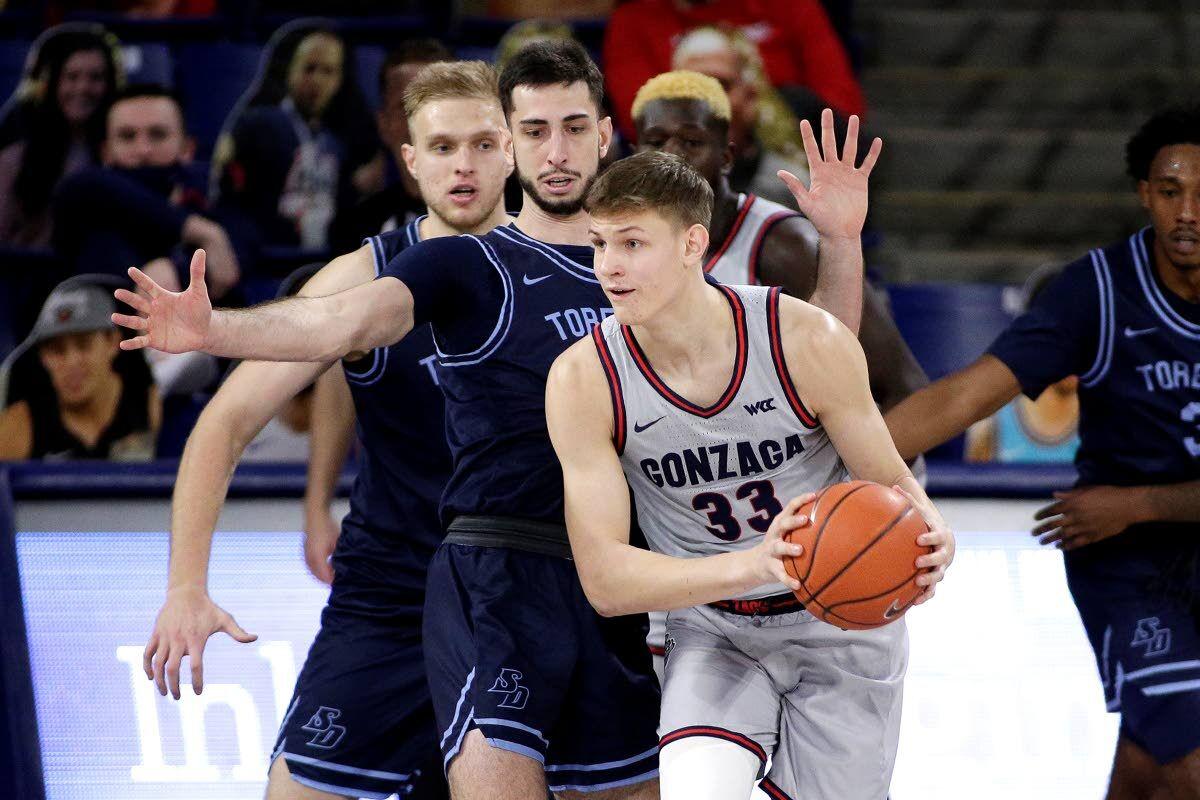 Ben Gregg of Gonzaga looks to pass the ball while pressured by Jared Rodriguez of San Diego in a game in February at Spokane. Gregg, whose has family ties to Lewiston and Clarkston, accelerated his education to be able to join the Zags this season. 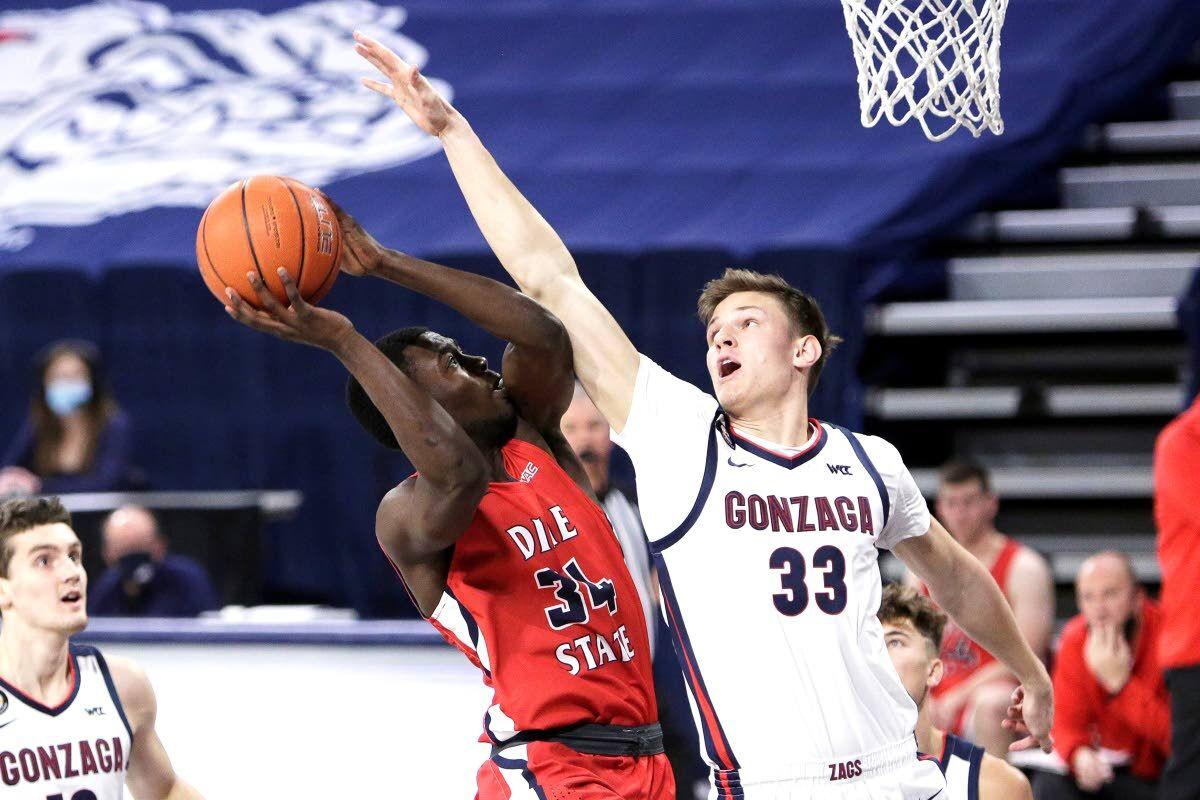 Ben Gregg of Gonzaga looks to pass the ball while pressured by Jared Rodriguez of San Diego in a game in February at Spokane. Gregg, whose has family ties to Lewiston and Clarkston, accelerated his education to be able to join the Zags this season.

Like many basketball-minded families, the Greggs of the Lewiston-Clarkston Valley and elsewhere are accustomed to setting athletic goals and patiently working to accomplish them.

So watching Ben Gregg lately has been like watching time-lapse photography.

Last October, he was attending classes at Clackamas High School near Portland, Ore., and hoping the coronavirus pandemic would allow him to play his senior season.

On Tuesday, he was playing in the Elite Eight of the NCAA Tournament, defending the post against a guy who’ll probably go first or second in this year’s NBA draft.

Ben Gregg, 18, a vaunted 6-foot-10 forward, orally committed to powerhouse Gonzaga in September, naturally thinking he would enroll at the Spokane school a year later. But a Zags assistant coach, realizing Oregon high school basketball was likely to be scotched by the pandemic, phoned Ben a few weeks later and invited him to join the program this season. Since the NCAA granted an extra year of eligilibilty to winter-sport athletes because of the pandemic, a number of freshmen in the country were planning to become midyear enrollees and remain true freshmen next season.

Just one problem. Ben had to graduate from high school. Quickly.

“So he started taking online classes the first part of November and got them done in six weeks — a semester’s worth of high school in six weeks,” Matt said. “I’ve never seen him that motivated before.”

By late December, he was getting court time with the top-ranked team in the country.

He’s averaging only 3.2 minutes and one point a game, but Zags coach Mark Few thought it copacetic to insert him into the first half of an 85-66 win in the Elite Eight this week against USC. So there he was, briefly playing defense against uber-post Evan Mobley. He played two minutes in all and had one rebound.

The Zags (30-0), trying to become the first team to finish undefeated since 1976, play a semifinal game at Indianapolis at 5:30 p.m. PDT today against UCLA.

The hoops-adoring Greggs are lapping this up. Matt, who stands 6-10, ranks seventh all-time in career rebounds at Lewis-Clark State and now coaches the women’s team at Warner Pacific, an NAIA school in Portland.

“It’s really been a whirlwind,” he said. “I was really surprised when my brother let me know they wanted Ben to join the team early. I had never heard of something like that. Especially from a No. 1 ranked preseason team. It was like, wow, they must really like this kid.”

“No matter the height, you’re shooting the 3,” he said of the Greggs. “My brother, when he was playing at L-C, (coach) Dick Hannan would be yelling at him to get inside and Matt would be launching it from 3.”

Ben Gregg, he said, “used to be kind of afraid of contact, but he isn’t anymore. He realizes he can play with those kids. He got to play a lot over the last year, a lot of pickup stuff, with other D-I athletes and some of the Trail Blazers, and he really got a dose of confidence there.”

Before that, the family’s devotion to basketball no doubt spurred Ben’s improvement.

“He and I have spent countless hours in the gym honing the gifts he’s been given,” Matt said. “He would be around my players all the time when he was a little kid. He was in the gym, he was listening. He was my water boy — he’d wear a suit to games and pull out my chair and have my clipboard ready.”

Matt and his wife, Kori, a former LCSC volleyball player, moved from the L-C Valley before Ben was born, but the family paid many visits to the area, especially before the deaths of Matt and Gordy’s parents, Bill and Bev.

Meanwhile, one of the places they lived was the Spokane area, where Matt coached Freeman High at Rockford. So don’t imagine Ben Gregg became a Zag fan just last year.

“I’ve looked up to the Gonzaga men’s basketball team since I was a little kid,” he told the school when he signed.

While he was going into academic overdrive in November, he was also intensifying workouts with his strength coach to try to become college-ready.

“We had it all planned out for the last six months before I was going to be there,” he said by phone Thursday from Indianapolis. “We were taking it slower than than we normally would because we thought we had so much time.”

As it turned out, “We jam-packed that month with a lot of workouts with my dad and lifting every day. It definitely sped the process up, but I couldn’t be happier. It’s definitely the best decision I ever made.”