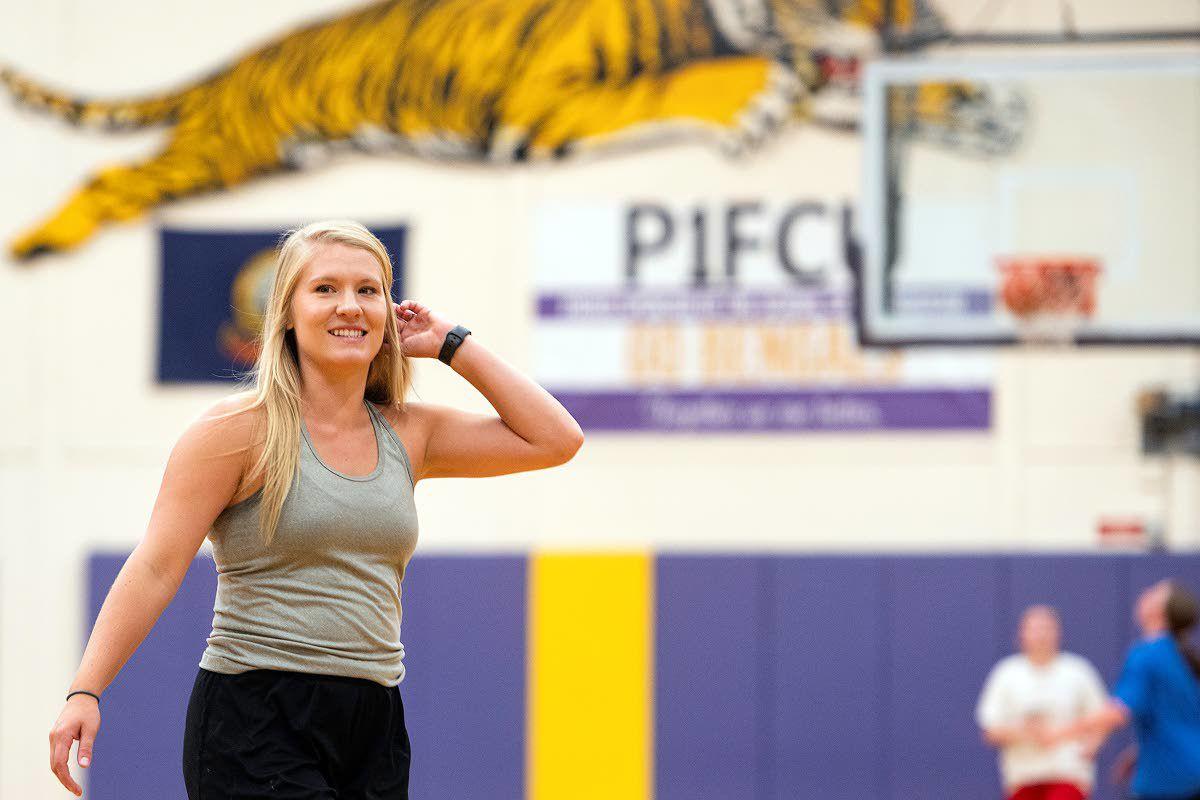 New Lewiston High School girls’ basketball coach Karlee Wilson walks across the court at Booth Hall as her team runs through drills Thursday. It was Wilson’s first practice with the Bengals, for whom she played several years ago.

Wilson is shown during her Bengal playing days, drawing a foul from Coeur d’ Alene’s Dayna Drager in 2010.

New Lewiston High School girls’ basketball coach Karlee Wilson walks across the court at Booth Hall as her team runs through drills Thursday. It was Wilson’s first practice with the Bengals, for whom she played several years ago.

Wilson is shown during her Bengal playing days, drawing a foul from Coeur d’ Alene’s Dayna Drager in 2010.

Thinking back a few years, it probably should have been obvious that Karlee Wilson had a mind for coaching before anyone greatly expected it.

At Idaho, the tenacious point guard embodied the term “floor general.” The stalwart defender was a steadying presence, and essentially gave Vandals coach Jon Newlee a second pair of eyes.

“I wasn’t filling up the stat sheets by any means, it was more bringing the team together,” said Wilson, a Lewiston High alumna and the school’s new girls’ basketball coach.

She was a team captain and a mentor at UI — a glue piece that helped the Vandals significantly to two conference titles and a pair of NCAA Tournament appearances.

“Hands down, it was really important, just having the confidence instilled in me as a point guard,” said Wilson, who began her prep coaching career in 2018 at Moscow. “I was Newlee’s right-hand girl on the court. We constantly talked about what he sees, about what I see.

“I think that’s where I got most of the coaching side of everything, being his point guard and running the floor for him.”

Wilson picked Newlee’s brain, and has since kept a binder full of drills and mental notes. She made sure to bring it along Thursday, when she conducted some individual workouts with the Bengals for the first time.

Yet her time as a Vandal standout wasn’t the ultimate factor in the decision to coach. UI represented a culmination of an accumulation of good experiences in the sport.

“It was definitely the coaches I’ve had in my life, anywhere from seventh grade,” she said of entering the profession. “Debbie Sobotta, Bob Jungert, Pat Teichmer, then Steve Klees on the Northwest Blazers, to Newlee — all those coaches made my experience so great, and that’s what pushed me to coach.

“I want to give girls that same experience, and show them how much happiness basketball can give you, or the paths it can give you.”

Wilson draws motivation, scheme-wise, from Newlee and Klees, the latter of whom coached her and several regional stars during their travel-ball days.

The Blazers, a nationally renowned club team, were comprised entirely of future Division I players — including some Vandals, along with Oregon State’s Jamie Weisner and Arizona State’s Kelsey Moos, to name a few. They made stops at several hoops hubs around the country, compiling an 88-4 record and winning eight national tournaments with Wilson aboard.

Wilson had gotten on the team early, and by chance. In sixth grade, her AAU team lost to the Spokane Lady Hoops squad at a summer tournament “like 97-7 probably, just annihilated,” Wilson recalled. So her mother, Laurie, approached the opposing coach, and inquired about Wilson playing for the Spokane club.

“Two weekends later, I’m playing in Yakima on that same team,” she said. “They’d called my mom, and said they needed an extra body. I played with them the rest of our high school careers, and we joined the Blazers organization kinda at the beginning of it. And I still talk with them all the time.

“That’s where I realized this could be a college thing, where I get a scholarship.”

Wilson will structure her practices to induce competition within the team, much like Newlee does. At UI, her training sessions were quite defense-oriented — where Wilson, standing maybe 5-foot-3, shined as a feisty, charge-taking pest and an effective rebounder. Her LHS practices will be similar.

“Newlee always had practices where we kept score against each other, and the losers would run,” she said. “I try to have them go like that.”

As far as building a culture while at the helm of multiple teams, Wilson said her prep days as a Bengal will come into play. She recalls Teichmer’s one-on-one work with players, and the talent and team chemistry produced en route to back-to-back state titles in 2011 and 2012.

“I’ve been recalling the team-building, and how to incorporate everyone into your program. I remember Pat putting on camps and having the older girls running it, that definitely kept my interest with individual development of players,” said Wilson, an all-state guard who played alongside Bengal collegiates like Tisha Phillips, Savannah Blinn, Tanis Fuller and Chelsea Waters during the 2011 title run.

“That was an amazing year. We had great chemistry, our bench was deep and we were all on the same page mentally.”

It’s too early to get into specific goals, but broad ones include contending in the Class 5A Inland Empire League and vying for a State berth. Wilson hopes to be a resource for her pupils, much in the same vein as her coaches had been.

Players can take note of her history. Wilson grinded through a freshman-year ACL tear in college to become one of the program’s best of the decade, which featured a March Madness showing against top-seeded Baylor in 2016.

“It was such an accomplishment that we got there, but as a coach, that’s what you push for,” she said. “In high school, our goal is to get to State, and compete there. We need to have that every day we come into the gym.”

Wilson and her fiance, Eric Stefanchik — who met Wilson as a volunteer practice player with the Vandals — will move to the valley next month. She plans to earn a teaching certificate in the near future, and until then, hopes to take an instructional role in some form with the school district. Wilson was a special education paraprofessional for the last two years at Moscow Middle School.