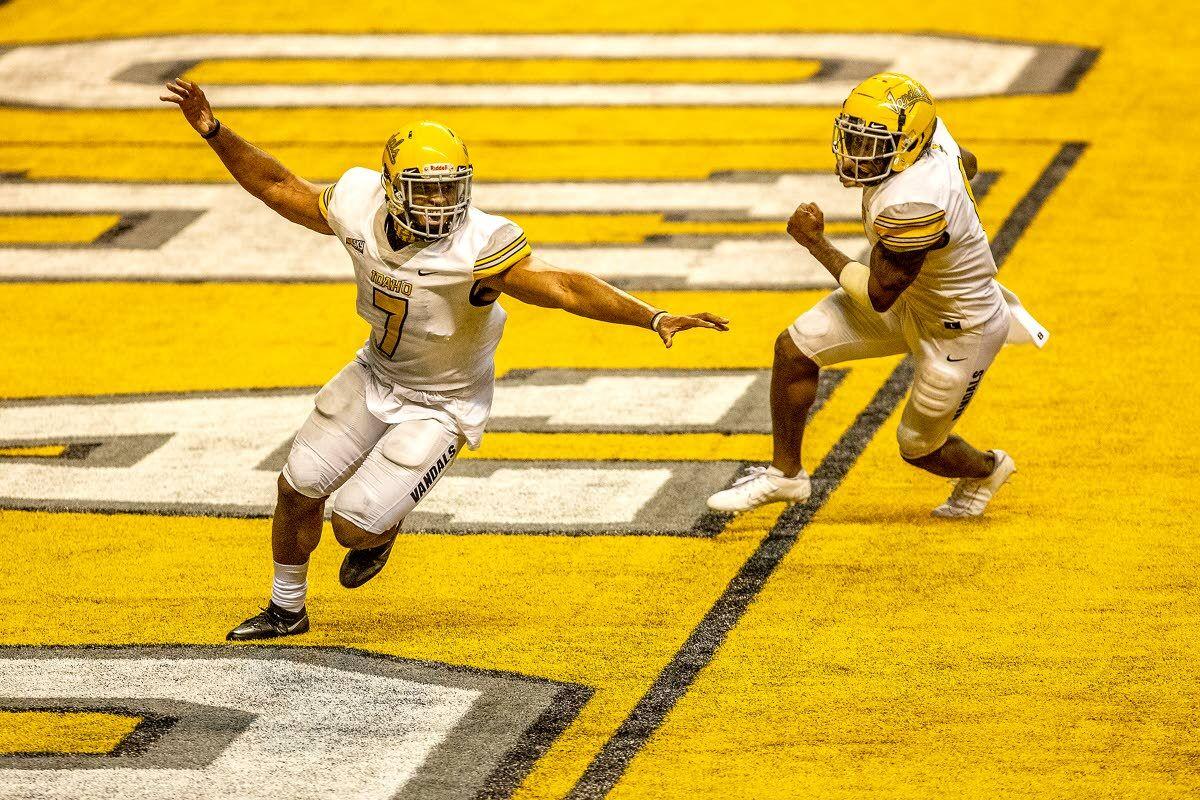 Idaho linebacker Charles Akanno, left, has four tackles for loss, along with a sack, pass deflection and three quarterback hurries for the Vandals so far this season. 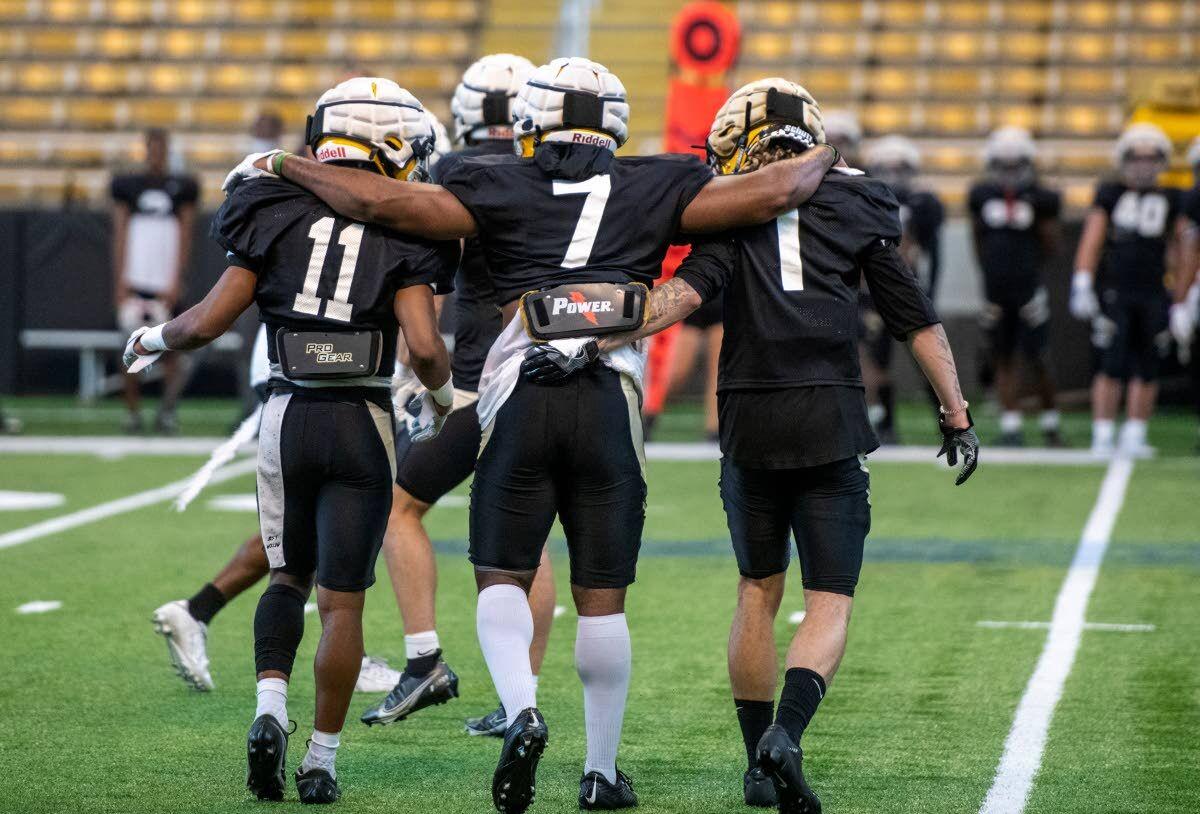 Idaho linebacker Charles Akanno, center, puts his arms around teammates Marcus Harris and KJ Jarrell during an Aug. 21 scrimmage at the Kibbie Dome.

Idaho linebacker Charles Akanno, left, has four tackles for loss, along with a sack, pass deflection and three quarterback hurries for the Vandals so far this season.

Idaho linebacker Charles Akanno, center, puts his arms around teammates Marcus Harris and KJ Jarrell during an Aug. 21 scrimmage at the Kibbie Dome.

At another practice, Akanno mimed putting on a championship belt after a big play and posed for an imaginary photoshoot by teammate Kayode Rufai.

Those are just a couple examples of how Akanno — a sixth-year senior who is having a big year similar to his 2019 breakout campaign — brings energy and fun to the Vandal sideline.

“It keeps things lively,” Akanno said with a laugh when asked about his mini celebration with Rufai. “Sometimes it gets hard out there, so we just try to keep each other up, and doing things like that just helps our game.”

Akanno might be a jokester at times, but on the field he’s all business. Although he’s listed as a linebacker, diehard Vandal fans know his position is more akin to a defensive end in traditional defenses.

His job is to disrupt quarterbacks and drop running backs in the backfield. The senior has a team-high four tackles for loss this season as well as a sack, pass deflection and three quarterback hurries for the 0-3 Vandals.

“I think the biggest thing he has is explosiveness,” Elliss said. “He’s so explosive and his first step is pretty wicked … a lot of how he wins is through that first step.”

Akanno first burst onto the scene in a breakout ’19 season that featured a whopping 13.5 TFLs, 3.5 sacks, four forced fumbles and eight pass breakups in eight games.

But Akanno’s monster season was cut short when the then-junior ruptured his Achilles Oct. 19, 2019, in UI’s homecoming game against Idaho State.

The recovery was long and tiresome — Achilles injuries typically take almost a year to fully recover for football players.

“It was hard for me, but I feel like it happened for a reason and it just made me a stronger person, mentally, physically,” Akanno said. “Just being able to overcome that and be where I’m at now, I feel like I made big strides and it’s going to pay off.”

The move of the 2020 season to this past spring allowed Akanno to play all six games. But even though he recorded 7.5 TFLs and a pair of sacks, Akanno wasn’t quite back to his old self.

Now, Elliss said Akanno looks the best he’s looked in his six years in Moscow. The Inglewood, Calif., native redshirted his initial season in 2016 and gained an extra year of eligibility thanks to NCAA exemptions for athletes because of the pandemic.

“Right now, I think he’s playing some of his best football today,” Elliss said. “I think he’s doing some really good things as far as leadership and leading not just by words but by example.”

Akanno said he tries to model his game after Aaron Donald of the Los Angeles Rams — a player who’s been in the NFL MVP conversations in recent years.

Akanno did his biggest Donald impression in a Sept. 21, 2019, win against regional rival Eastern Washington. The Vandals won 35-27 and Akanno had nine tackles and a key forced fumble.

It’s a game he and coaches hope to replicate in conference play this season. The Vandals open Big Sky play Oct. 2 at UC Davis.

“I think right now he’s playing extremely well and his trajectory is in the right direction — it’s nothing but up,” Elliss said. “I think in two weeks he’s going to show our conference what he’s all about.”