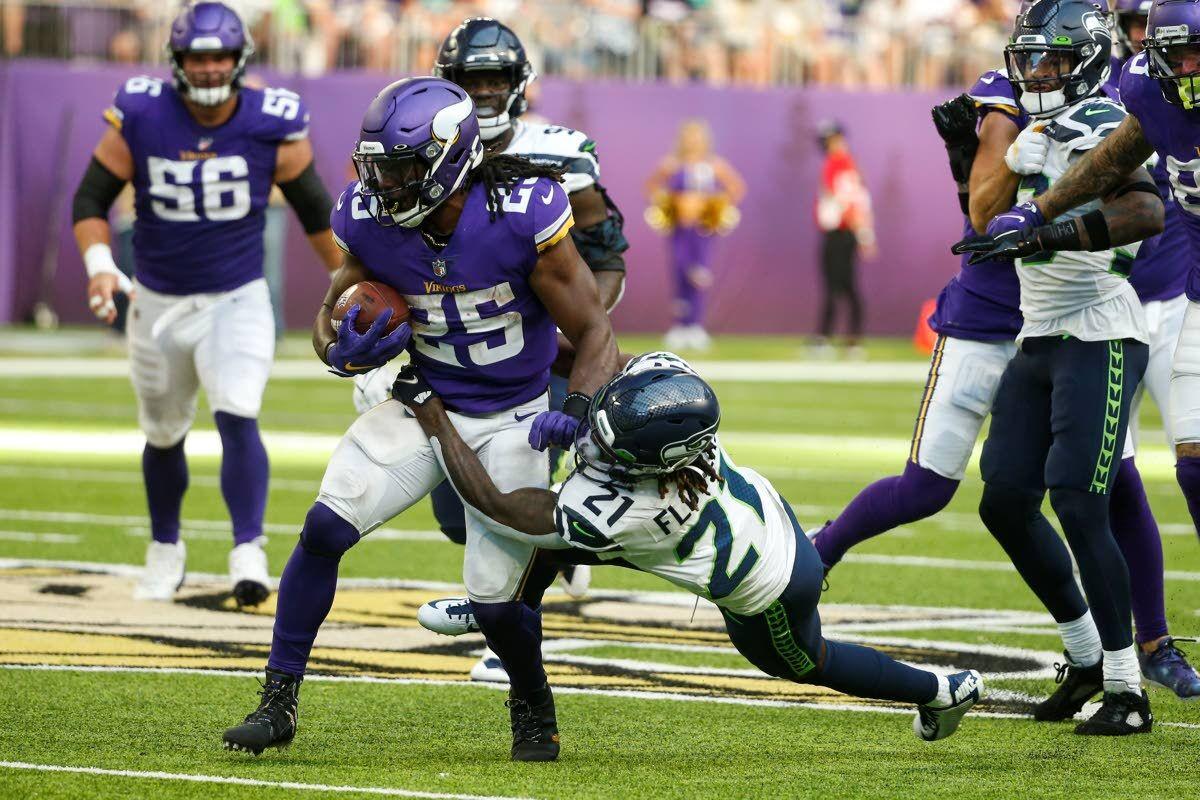 Minnesota Vikings running back Alexander Mattison (25) is tackled by Seattle Seahawks cornerback Tre Flowers (21) in the first half of an NFL football game in Minneapolis, Sunday, Sept. 26, 2021. (AP Photo/Bruce Kluckhohn) 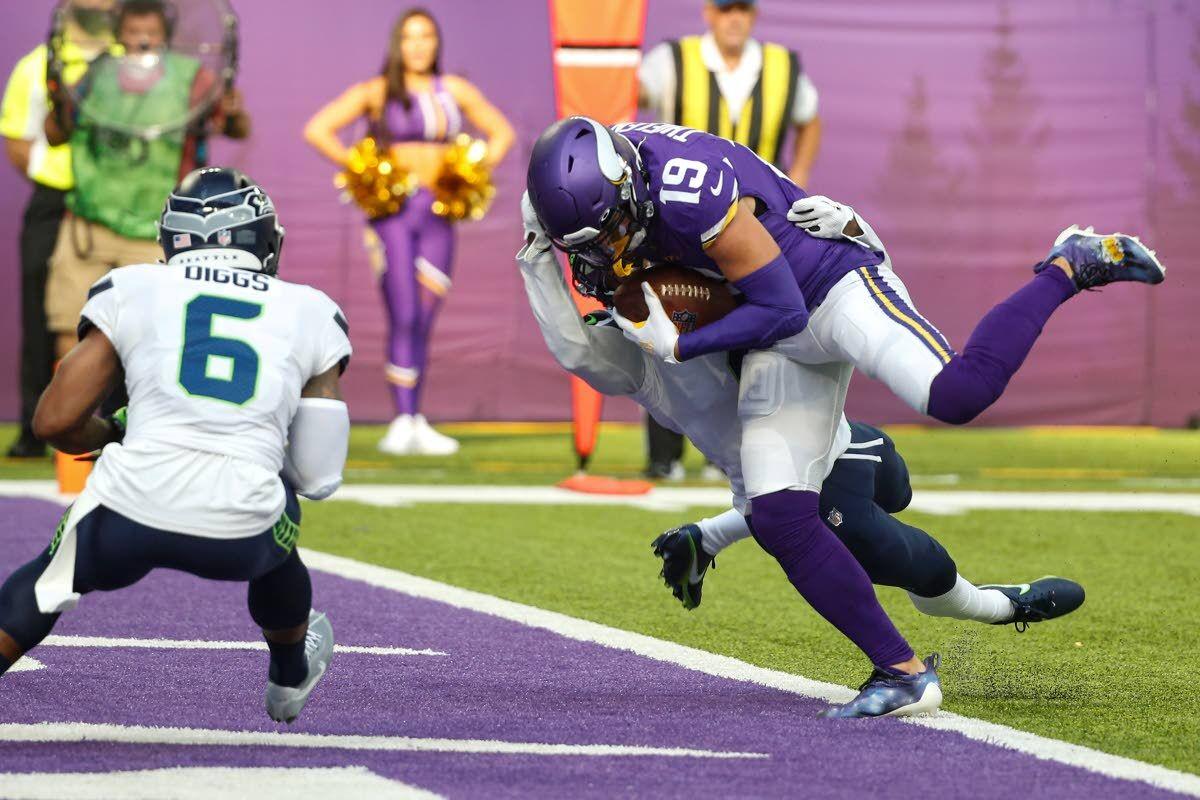 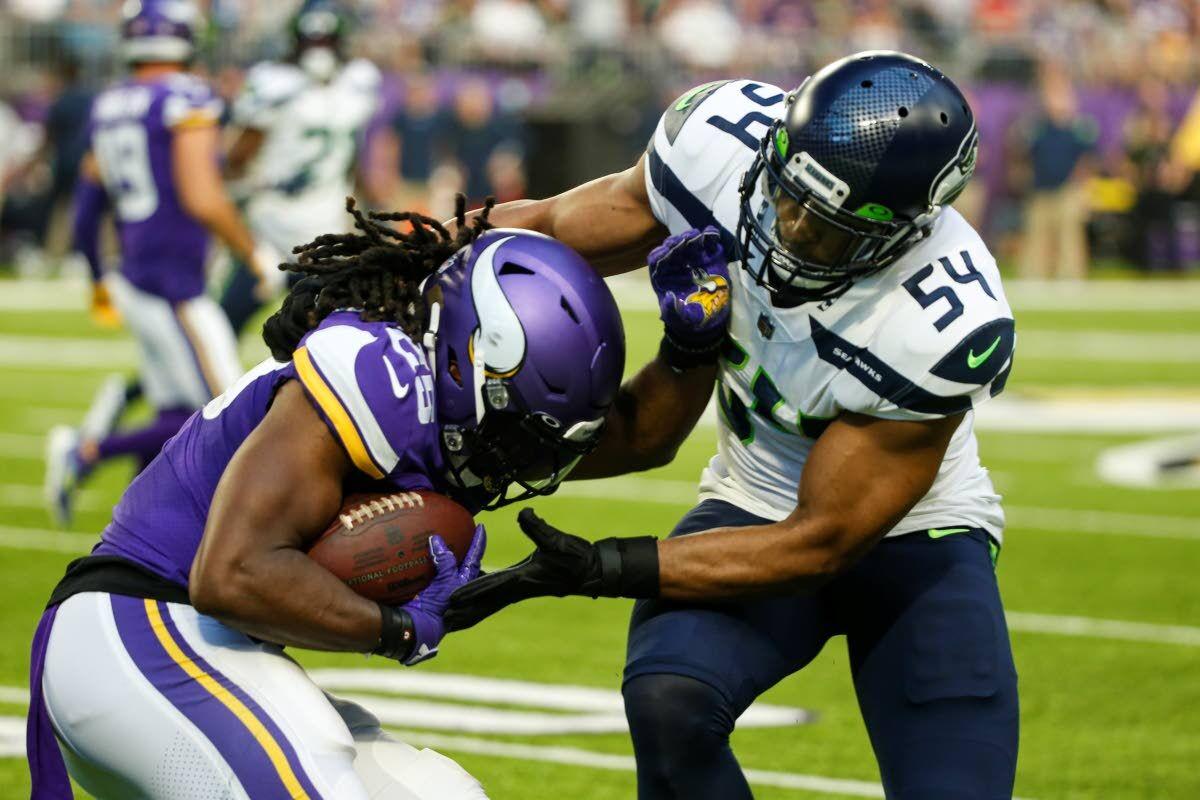 Minnesota Vikings running back Alexander Mattison (25) is tackled by Seattle Seahawks cornerback Tre Flowers (21) in the first half of an NFL football game in Minneapolis, Sunday, Sept. 26, 2021. (AP Photo/Bruce Kluckhohn)

MINNEAPOLIS — As more and more time passes from those back-to-back Super Bowls the Seattle Seahawks reached, their defense less and less resembles those dominant groups.

They let another game slip away Sunday — and this time, a long winning streak against Minnesota too — because they simply couldn't stop the other team from scoring.

Kirk Cousins passed for three touchdowns before halftime for Minnesota and guided three clock-draining field goal drives after that, as the Vikings cruised past the Seahawks 30-17.

The Vikings converted nine of 14 third downs and had possession for a whopping 22:40 after halftime — more than 75 percent of the second half.

“It doesn’t feel right to be in a race to score to keep up with the other team, and it’s kind of what it felt like in this game,” said coach Pete Carroll, who lost to the Vikings for the first time since taking the job in 2010. “Both teams were moving it, and we kind of got quiet, and they didn’t.”

The Seahawks beat the Vikings at home in each of the past three years to stretch their winning streak to seven games, but this was their first visit to U.S. Bank Stadium. They were greeted by a pent-up crowd that couldn't wait to see the home team for the first time in 21 months, after the pandemic kept the gates closed last season.

This was the first non-preseason game the Seahawks played in Minnesota since the wild-card round in record-setting subzero cold outside at the University of Minnesota's stadium on Jan. 9, 2016, when Blair Walsh missed a 27-yard field goal for the Vikings near the end of Seattle’s 10-9 win.

Not only was the environment a complete contrast, indoors with sunlight from an 82-degree day streaming in through the glass doors, but Seattle's defense these days is a shell of its old self. The “Legion of Boom” secondary is no longer, that's for sure.

After squandering a 14-point fourth quarter lead the week before and losing to Tennessee in overtime, the Seahawks watched a 17-7 advantage in the second quarter slip away as Cousins carved up the middle of the field and Alexander Mattison muscled his way through the front seven in place of the injured Dalvin Cook.

“We know we have more ability than we have shown, but we have to go do it,” defensive end Carlos Dunlap II said.

While the play felt like a distant memory down the stretch, backup safety Ugo Aamdi made a costly gaffe in the second quarter.

The Seahawks (1-2) had forced the Vikings to punt on a three-and-out on the previous possession and would have done so again with a sack on third-and-3 by Rasheem Green at the Minnesota 16-yard line, but Amadi was called for holding on receiver K.J. Osborn to give the Vikings an automatic first down. The next play was a 23-yard completion from Cousins to Mattison, and the Vikings were in the end zone seven snaps after that.

“There’s statistics that show when you have a significant penalty on a drive, the scoring opportunity goes way up. But I ain’t buying that, not in that sequence,” Carroll said. "We should be off the field in any one of the other opportunities.”

Defensive passing game coordinator Andre Curtis was not with the team for personal reasons, and Deshawn Shead filled in.

“I promise you that’s a factor, unfortunately. Dre has a real positive effect with our guys,” Carroll said. "Suddenly, he’s out of the mix and we missed him. We missed him today.”

The players who were present down the stretch, well, might as well have been missing. Cornerbacks D.J. Reed and Tre Flowers did little to slow Minnesota's standout receiver tandem of Justin Jefferson and Adam Thielen. The two players had touchdown receptions, and Jefferson caught nine of the 11 passes thrown his way for 118 yards.

“We threw everything out there. All the stuff we’ve been working, we went with today. Tried different things to get pressure, but they were ahead on the rhythm. They did a nice job of staying ahead of us,” Carroll said.