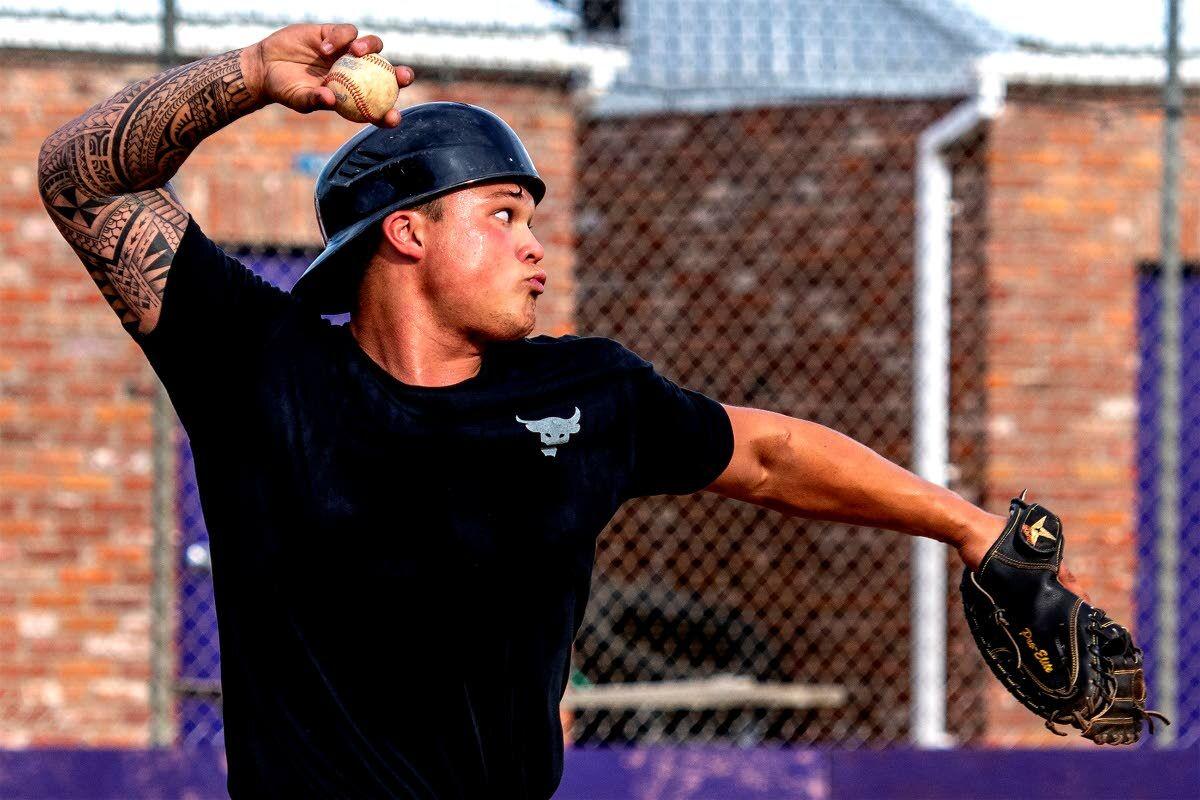 Lewis-Clark State’s Jackson Fuller is playing for the Treasure Valley Tribe of the Competitors Baseball League this summer. 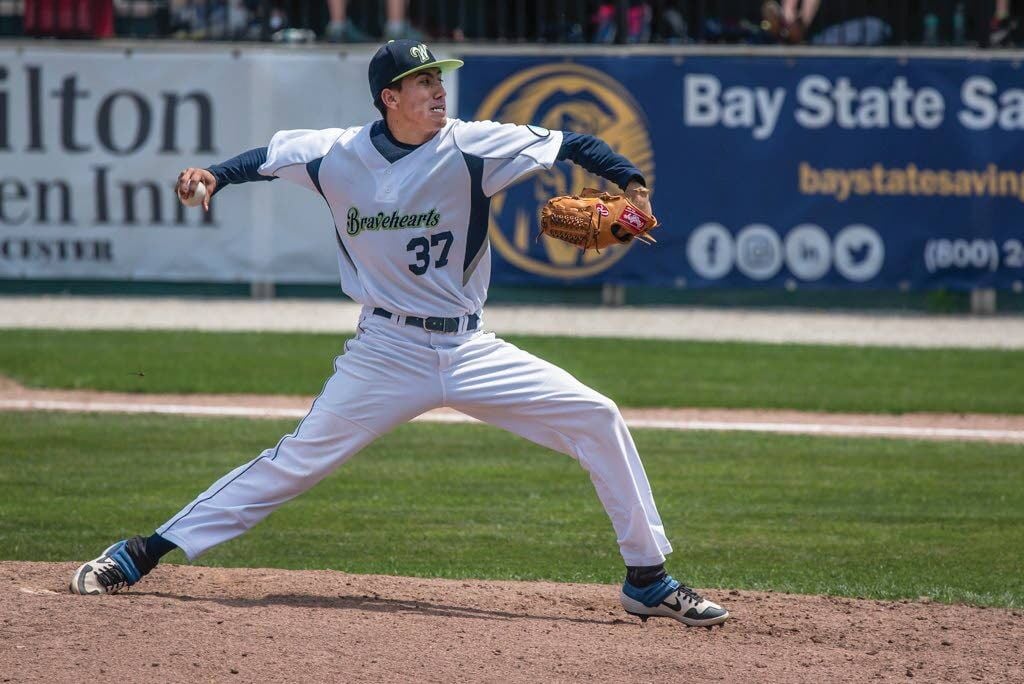 Lewis-Clark State pitcher Eric Chavarria throws during a recent game for the Worchester Bravehearts.of the Future Collegiate Baseball League of New England. Chavarria is 1-0 with a 1.96 ERA in five games pitched so far this summer.

Lewis-Clark State’s Jackson Fuller is playing for the Treasure Valley Tribe of the Competitors Baseball League this summer.

Lewis-Clark State pitcher Eric Chavarria throws during a recent game for the Worchester Bravehearts.of the Future Collegiate Baseball League of New England. Chavarria is 1-0 with a 1.96 ERA in five games pitched so far this summer.

The coronavirus-spurred cancellation of Lewis-Clark State’s baseball season didn’t deter some Warriors, who decided to develop further in wood bat leagues, gearing up for a run at a 20th national title in 2021.

Three of them — Jackson Fuller, Eric Chavarria and Aidan Nagle — have performed well so far this summer. The following is a look at their seasons:

The Lewistonian catcher is a part of the inaugural season of the collegiate Competitors Baseball League, landing early this month in the Boise area with the Treasure Valley Tribe.

The sophomore was itching for live competition after being hampered during the spring by a UCL injury sustained in the fall.

“I didn’t move around much for six months, gained some weight and kinda had a rough season,” Fuller said. “When COVID hit, I felt like it was time to turn on the gas. I heard about this league and thought, ‘Oh sweet, I have an opportunity to work on catching, my craft — blocking, receiving — and definitely hitting.

“They created it to give everyone reps, which is great. They’re all competitors.”

“With the season ending early, I just wanted to play some baseball,” Fuller said. “Brooks hooked me up with it, so I moved into a camper behind his house. They’ve shown me a lot of hospitality.”

Fuller sought to regroup and improve, splitting time fine-tuning with games at a barebones ballpark in Caldwell, and at a Boise baseball facility called D-BAT.

Now, he’s “got it together,” and “ready for fall.” Fuller has augmented his footwork behind the plate, and his arm — cutting down three runners in eight attempts. He’s only had one passed ball in eight games.

“I take a lot of pride in keeping the ball in front of me, and I’ve been doing a pretty good job with that,” said Fuller, who even pitched a scoreless inning for the Tribe, a team short in that regard.

Offensively, he’s hitting approximately .320 with two home runs, 10 RBI and three doubles. Before this, he’d never hit one out of the park.

“That was a cool experience. I’d never gotten to jog around the bases,” he said. “I’m definitely happy with how I’m hitting.”

Fuller will return next week to begin Season 3 “chasing the dogpile” at childhood favorite LCSC. First, he has a couple more appearances with the Tribe, who play a doubleheader today.

The spindly junior right-hander solidified an ace-like role as the Warriors’ most unshakable starter in their abbreviated season, during which he went 4-0 with a 1.00 ERA.

“I wanted to give us a chance every time we played, and as a leader on the staff, my hope is to step up and take more control,” he said.

Through five outings with the Worcester (Mass.) Bravehearts of the Futures Collegiate Baseball League of New England, Chavarria’s only backing up his 2020 spring season. The Cypress Community College (Calif.) transfer is 2-0 with a 1.96 ERA and 21 strikeouts against eight walks in 18 innings.

On Tuesday, he threw five scoreless innings for 14-5 Worcester in a rout of Nashua.

“This definitely has helped me,” he said. “At the end of the year, (I’ll have) seen a lot of different kinds of batters and what not.

“It’s definitely a grind, just ’cause of the repetitiveness, but enjoyable.”

The more time on the mound, all the better for Chavarria, who’s only been pitching full-time since his sophomore year at Cypress.

“Playing shortstop early helped me be an athlete,” he said. “I’ve been able to pick up on things rather quickly. There’s been a tremendous amount of talking with L-C coaches. ... I want to pick up on more.

“It was a decision made on my behalf, because I could have a better future on the mound. I think it’s ended up working out.”

Chavarria has been with Worcester the past two summers, having learned about the organization through a former Cypress teammate. Chavarria made his way to LCSC thanks to a juco coaching connection too.

He says the trials of the everyday play and the level of the opposition — mostly NCAA Division II, but with some eastern D-Is sprinkled in — has been a buoy to his evolution from infielder to ace.

Among his goals this summer are to boost his velocity to a consistent 90 mph. He was sitting around 87 mph last season. Chavarria’s change-up has become increasingly slick.

“It’s my second best pitch now,” he said. “(The Warriors) are big on me throwing a change-up.”

The Bravehearts, playing in a smaller, less-attended stadium because of COVID-19 concerns, have the Futures’ best record, and a starting rotation that boasts a 1.50 ERA. Worcester’s social media called Chavarria “the ace" following an immaculate inning he tossed last season.

“I’ve been fine-tuning things, making sure I’m ready,” he said. “I’m really looking forward to having another go (at L-C) with basically the same guys.”

Minor league baseball was scrapped, but some of its teams fashioned means of fielding groups, and putting on promotional nights at their parks.

The Tulsa Drillers, generally a Double-A affiliate of the Los Angeles Dodgers, have adopted a wood bat team from the Texas Collegiate League, providing it a name and a sizable, albeit socially-distanced, venue at ONEOK Field.

And Nagle is one of few from the NAIA to be involved.

“It’s been for better competition mostly, and to get rid of some bad habits I developed,” said Nagle, who’s joined by two standout Science and Arts (Okla.) pitchers for Tulsa, which otherwise fields exclusively D-I players, many from the Power Five ranks. “A lot of solid pitchers. I didn’t see as many good arms, didn’t get as many at-bats (at L-C), so I just wanted good competition.”

The 6-1, 210-pound junior transfer from Cuesta College (Calif.) started all 20 games for 15-5 L-C in the spring, and was set to ship out to Chatham of the prestigious Cape Cod League to suit up under former Oklahoma State coach Tom Holliday. But that tour was canceled.

Holliday was tabbed to manage the Drillers on June 16, and he quickly got a hold of Nagle, who Holliday had recruited after Nagle’s impressive 2019 summer season with the Woodstock River (Va.) Bandits of the Valley Baseball League.

“This isn’t easy, but it’s fun,” said Nagle. It’s humid, the trips are sometimes unbearably long, and the opponents are closer to Big 12-caliber than Cascade Conference. “We spend such limited time away from the field. It’s just playing baseball five or six hours per day.”