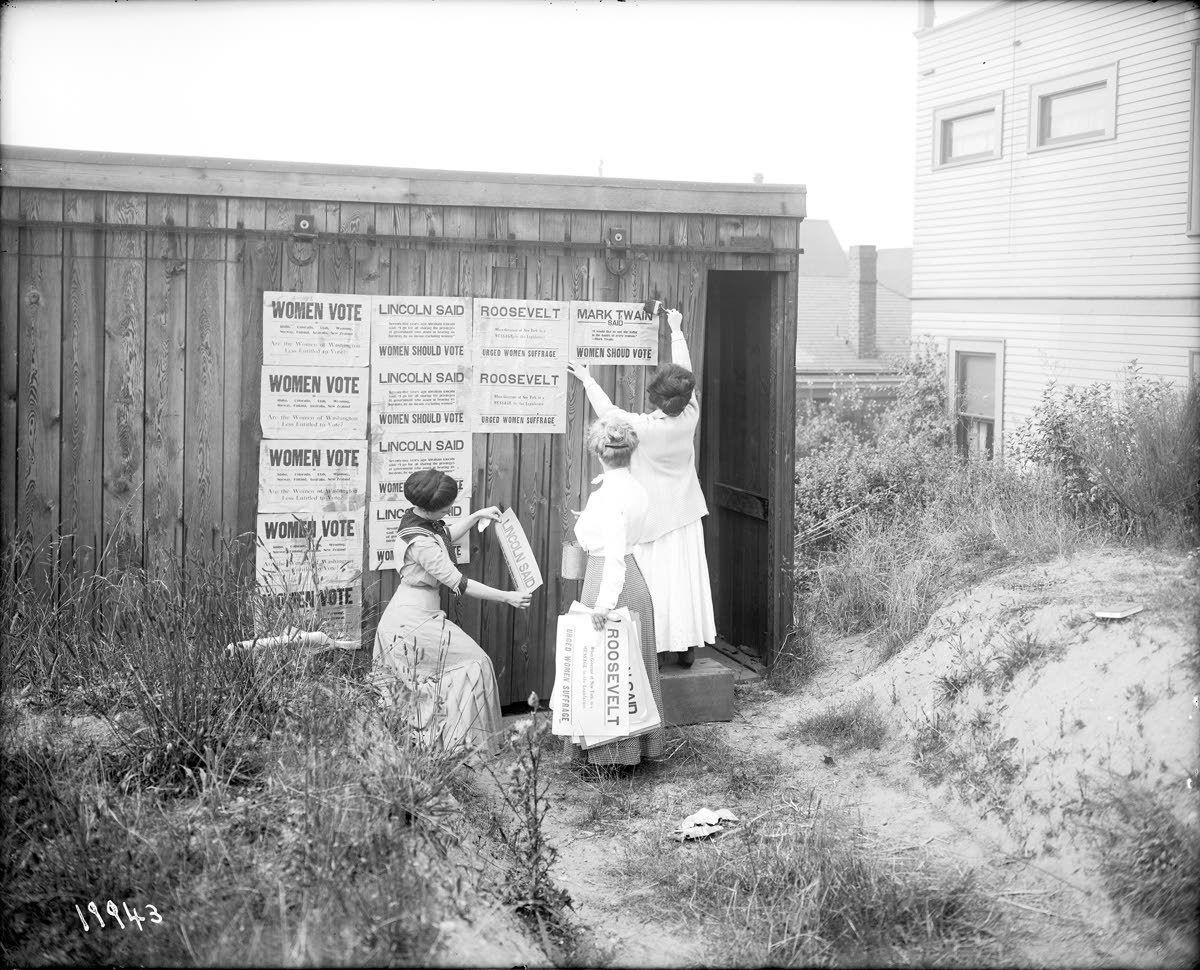 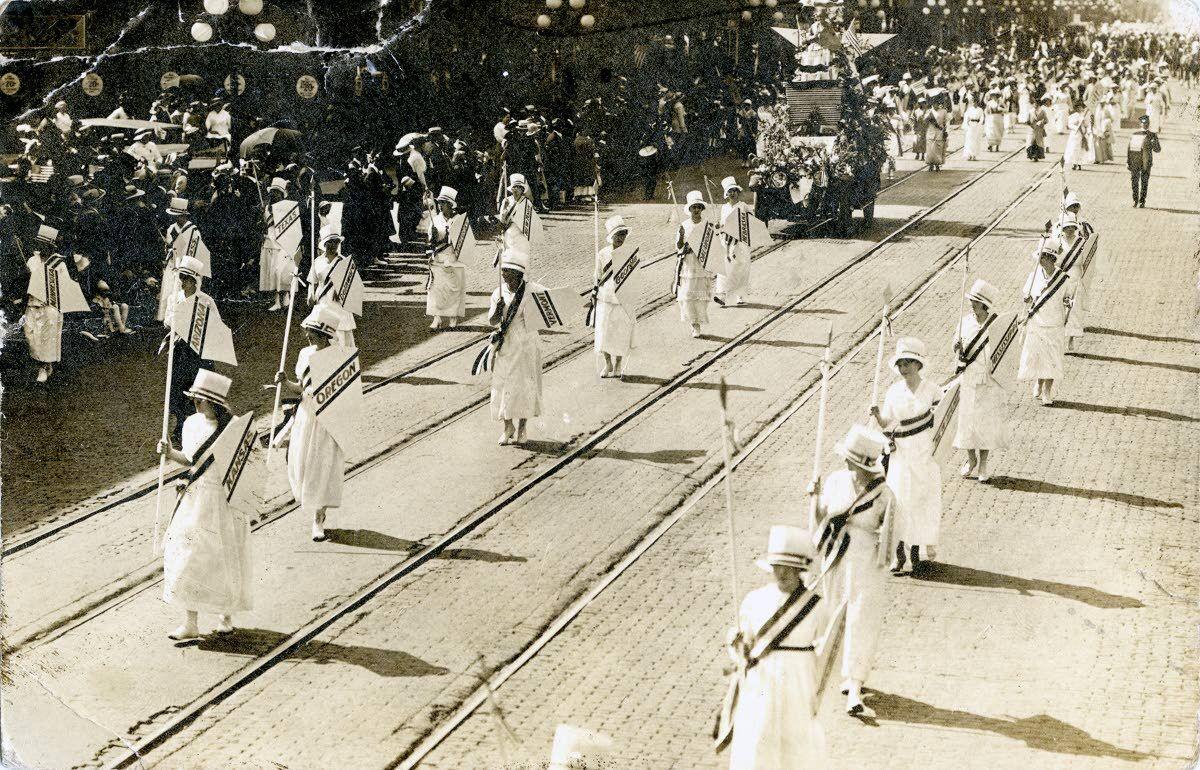 Women dressed in white march in the Preparedness Parade in Seattle on June 10, 1916. Each woman carried a shield with the name of a state on it. It is likely the shields designated the states that had granted suffrage to women. 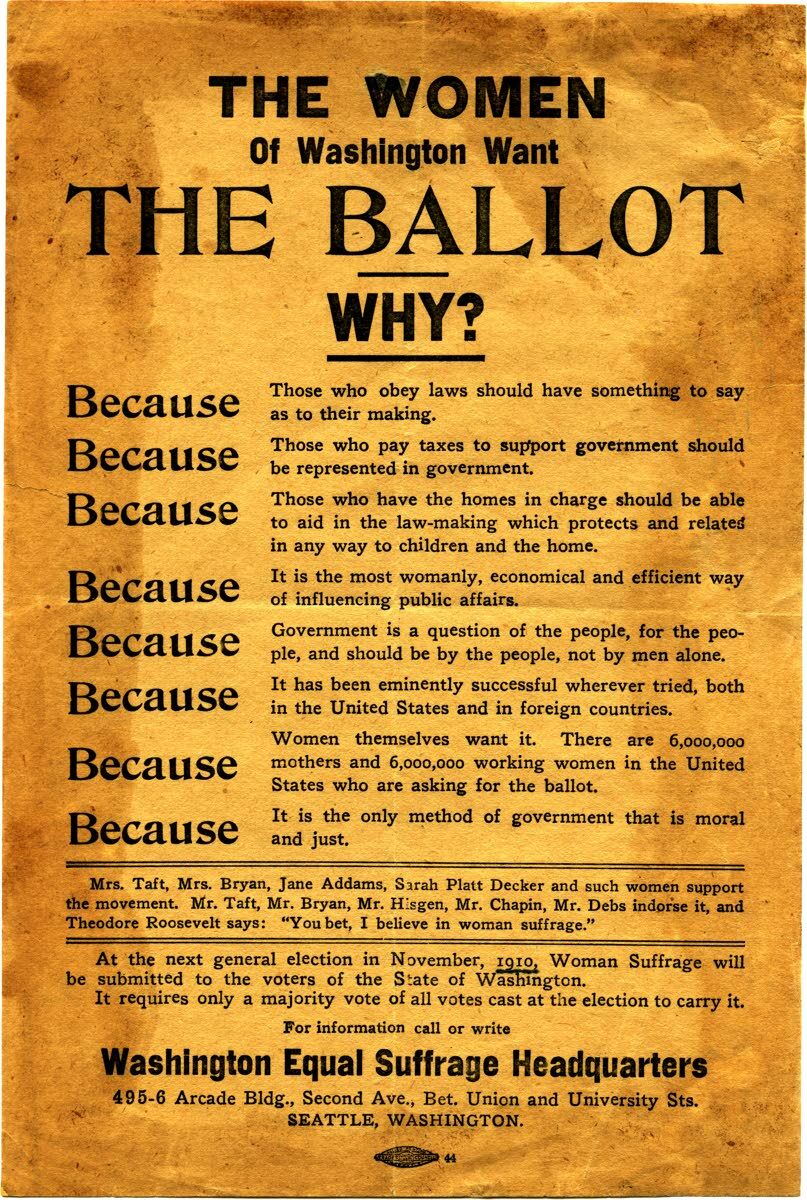 This political handbill was published in 1910 by the Washington Equal Suffrage Association.

Women dressed in white march in the Preparedness Parade in Seattle on June 10, 1916. Each woman carried a shield with the name of a state on it. It is likely the shields designated the states that had granted suffrage to women.

This political handbill was published in 1910 by the Washington Equal Suffrage Association.

Women in the Evergreen State were given the right to vote a decade before the rest of the country when the Washington State Constitution was permanently amended in 1910.

Ten years later, after a decades-long battle, women across the country were given the same opportunity when the 19th Amendment to the United States Constitution was ratified in 1920, granting women the right to vote.

“Many women here led the way,” said Julianna Verboort, the marketing and communications director for the Washington State Historical Society.

The historical society will celebrate the national suffrage centennial this month by providing a virtual “Suffrage Special Whistle Stop Tour” after an Olympia-based event was canceled because of the coronavirus pandemic.

The video series will make virtual “whistle stops” in cities throughout Washington from Wednesday through Aug. 26 to explore the history of women’s suffrage.

“This eight-episode video series explores our state’s connections to the larger national history of women’s suffrage and honors Washington’s women changemakers who led the way then as well as those who continue to do so,” said Mary Mikel Stump, the historical society’s director of audience engagement. “It is thematically based on the real life 1909 Suffrage Special train which carried local and national suffragists across our state from Spokane to Seattle in support of Washington women and their fight for the vote.”

Each segment will be led by a local historical organization.

The schedule includes “stops” in Spokane on Wednesday, Tri-Cities and Walla Walla on Thursday, the Yakima and Ellensburg area on Friday, Vancouver on Saturday, Bellingham on Sunday, Seattle on Monday, Tacoma on Aug. 25 and Olympia on Aug. 26.

The video series will be released on the Washington State Historical Society and the Votes for Women Centennial-Washington State Facebook pages, and also will be available online at www.washingtonhistory.org.

“While the 19th Amendment gave women the right to vote, women of color still faced discrimination and barriers at the ballot box, and women who were not considered citizens or allowed to gain citizenship were also disenfranchised,” stated a news release from the historical society.

A Suffrage Celebration event planned for this month at the Capitol in Olympia has been canceled because of the coronavirus pandemic.

“Our Whistle Stop Tour will be an interesting way for people to commemorate women’s fight for the right to vote and that legacy today, 100 years later,” said Elisa Law, the women’s suffrage centennial coordinator for the Washington State Historical Society. “The virtual delivery allows access for many people who might not have been able to make it to an on-ground event in Olympia.”