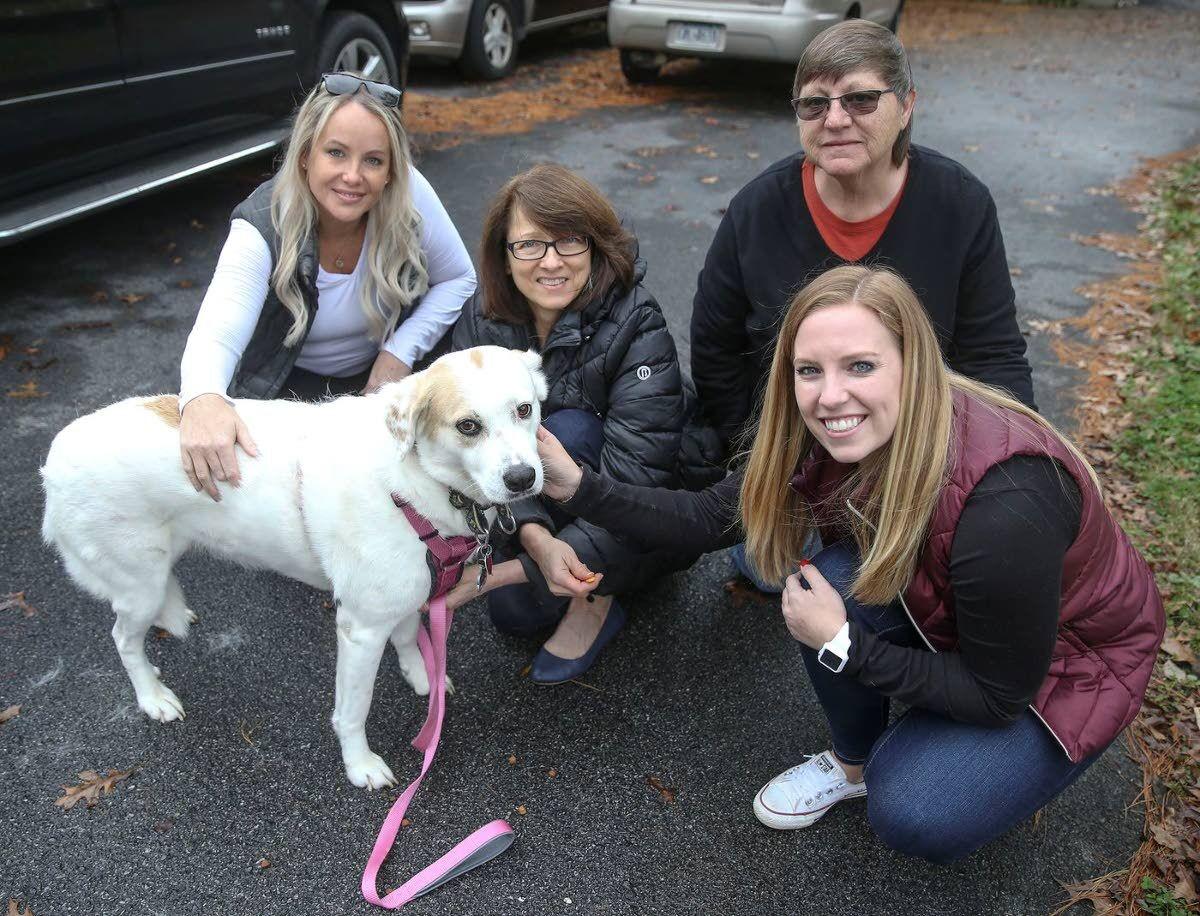 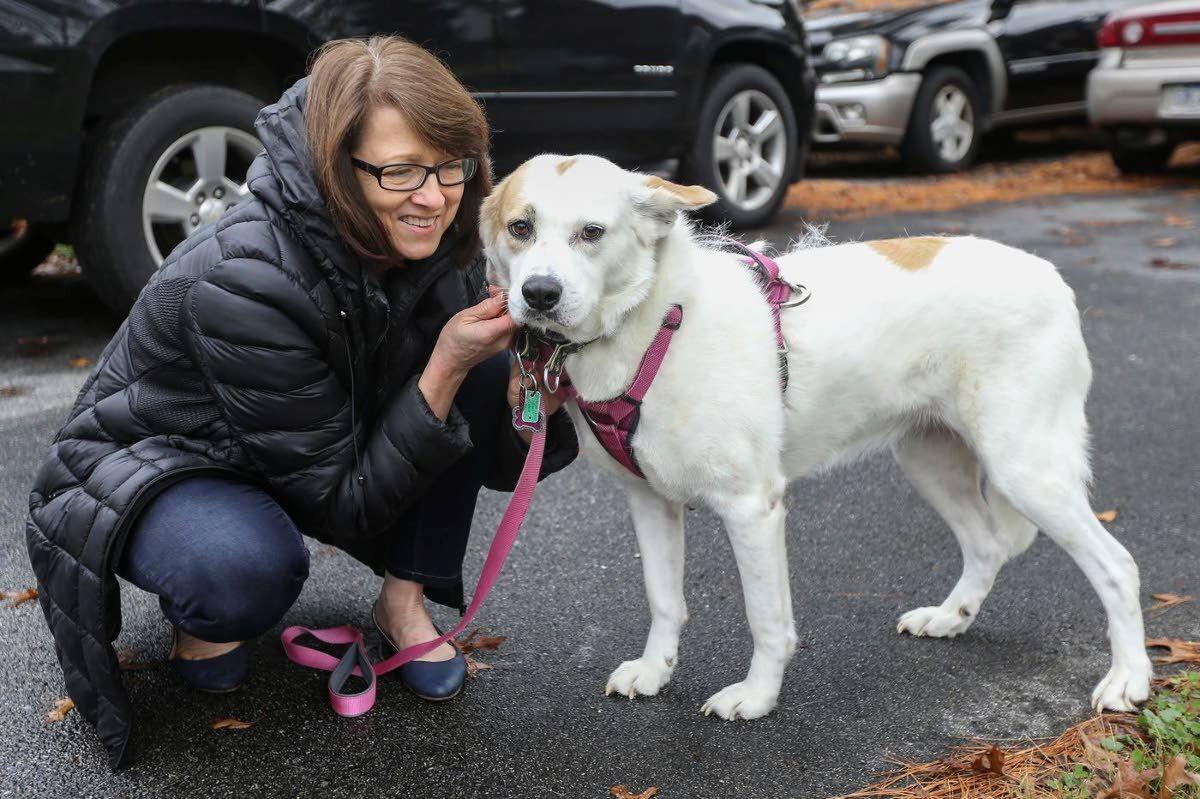 PHILADELPHIA — On an especially cold week in March 2019, Karen Jackson and her family welcomed a new member to their Westtown home: a 3-year-old female Great Pyrenees mix, adopted from a local rescue. But their delight was short-lived. Within hours of bringing the dog home — they hadn’t even decided on a name for her — the pooch had slipped out the front door and disappeared into the night.

“She just kept running, and we couldn’t find her,” Jackson said.

Distraught, they did everything they could think of: contacted the rescue they adopted her from, posted lost-dog notices, searched the neighborhood. Then they got a call from a woman who said she would like to help. Her name was Cathy Herman-Harsch.

Within four days, Herman-Harsch found the dog, which the Jacksons have named Beatrix, a.k.a. Trixie.

“Everything she did I don’t think would have come naturally to anyone,” Jackson said.

And Herman-Harsch wouldn’t take a dime from the Jacksons.

Herman-Harsch is a special breed of animal lover. For nearly 18 years, she has made her living with All Things 4 Legged & Personal, her Chester County, Pa., pet-care business. But her avocation is helping people find their lost dogs and cats. It’s something this Navy veteran and former IT worker has learned over the years of studying and observing companion animals — her own and others.

Finding a lost animal takes persistence, said Herman-Harsch, who runs her volunteer operation with three other women and her son Johnathan, 17.

“Recovery is not for the weary or those who drink decaf,” she said. “You’ve got to be a little on the crazy side, and you need your caffeine.”

A lot of what she tells pet owners to do — and not do — seems counterintuitive. Running through the woods, chasing a pet, calling its name? Big no-nos. That will likely only make it flee.

“People don’t realize it is not your pet at that moment,” she said. “It is a frightened dog, a frightened cat, and all they think is, ‘Predator. Someone is trying to hurt me.’ ”

Herman-Harsch instructs owners to lure their pets with lots of food, and use only non-threatening approaches: no eye contact, and just sit down and let the animal come to them. She has them scatter pieces of clothing or cloth that has the owner’s or pet’s scent where there have been sightings. Sometimes she uses equipment like trail cameras that are activated by motion and humane traps in areas where the animals have been seen, especially newly adopted animals that aren’t likely to come to their owners.

She also has to disabuse owners of others’ bad advice, like putting a pet’s litter box outside, with the hope of luring them home. All that will do, she said, is attract feral cats and other animals looking to mark the box as their own.

She and her team also counsel owners on how to get the most mileage out of lost-pet posters and social media — and, mostly, to just not give up.

“I’ve seen married couples fight like cats and dogs,” said Herman-Harsch. “No, no. You can’t fight. You have to be united on this.”

“Every search is different. It can be frustrating, but often you just have to redirect,” added Tina Fini, 39, a nurse and one of Herman-Harsch’s team members. In the end, she said, the rewards are great: “It’s such an incredible feeling being able to help a distraught pet owner get their baby back.”

“I can’t say enough good things about her dedication and commitment,” said Dru Campbell, director of LaMancha Animal Rescue of Coatesville. “When Cathy and her team are asked to intervene, they begin the search-and-rescue effort immediately. It doesn’t matter how cold, rainy, or hot it is.”

“We use Cathy because of how involved she gets,” added Kristen Geddes, director of All 4 Paws Rescue in Chester Springs. “She’s wonderful. She knows what she’s doing.”

At Herman-Harsch’s advice, Schaefer made his lost-pet posters bigger and more colorful, and omitted references to the locations of past sightings that could wrongly influence observations. She also advised against offering a reward (to weed out people just looking for money) and instructed the Schaefers to hold cook-outs near local bodies of water to lure the wayward Parker: runaway pets need water and often travel near it, Herman-Harsch told them, and they’re attracted to the smell of grilling meat.

But Parker was a tough case. Over five weeks, the Schaefers had some actual encounters with Parker, but then the dog would run off again. Herman-Harsch wouldn’t give up, so the Schaefers didn’t either. Finally, the family got a call late one night from a woman who thought she’d seen Parker on the grounds of her Malvern condo complex. Schaefer and his daughter Rachel, 22, jumped in the car.

This time, they got him.

Even though Schaefer and his daughter did the actual capture, he doesn’t think it would have happened without Herman-Harsch’s guidance.

“I just would have been out there spinning my wheels, not knowing which direction to head,” he said.

Some of Herman-Harsch’s rescues have involved out-of-towners whose pets went missing while they were visiting the area.

Gary Francella, 55, a military account manager from Virginia Beach, was in Downingtown for his mother’s funeral in July 2019 when his beloved Puppy, a toy poodle, disappeared. Herman-Harsch helped with the search — even sticking with Francella for 10 hours at a time — until Puppy was found. Francella was so moved by the odyssey that he is self-publishing a book about it.

“She was a godsend,” he said of Herman-Harsch. “She didn’t ask for anything.”

Californians Jenna Long, 34, a physician’s assistant, and Kyle Hott, 36, an aerospace engineer, were visiting friends and family in Pennsylvania during the 2015 Christmas season when Bailey, their Corgi-Chihuahua, ran off. The couple’s devotion to their dog included flying back and forth to Pennsylvania from California to personally continue the search, as well as hiring Pure Gold Pet Tracker, a Maryland firm that uses trained dogs to track lost animals. But their quarterback was Herman-Harsch, who kept the search going even when the couple was in back on the West Coast.

After nine weeks (and a lot of rotisserie chickens used as lure meat), Bailey was brought back into the fold.

Like other grateful owners, the couple said the pet finder wouldn’t accept money for her efforts, just supplies to help with other recoveries.

Lots of people have advised Herman-Harsch to rethink her pro-bono policy, she said, given that her paying job — pet care — has been decimated by the pandemic.

“Our clients are working from home. They don’t need us,” she said. “We’re really, really struggling.”

“My heart just can’t allow that,” she said. Besides, “It’s not about you. It’s about making the family whole.”