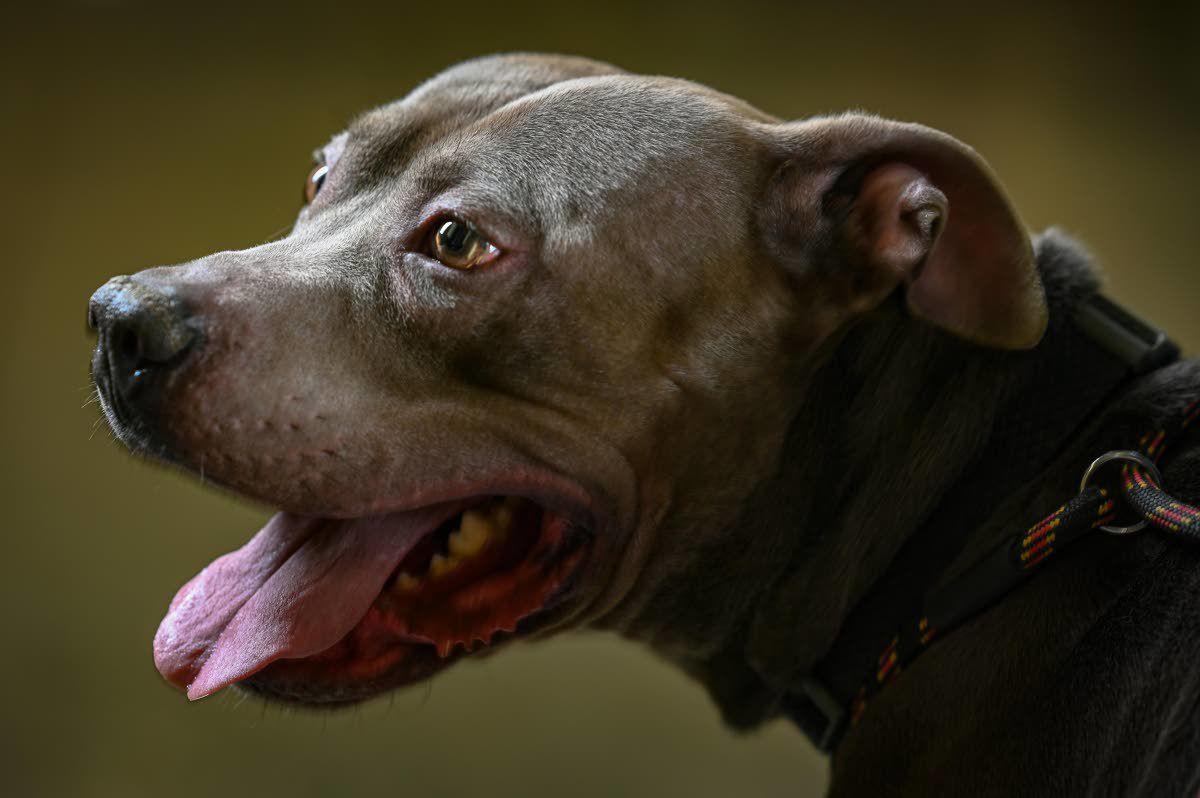 Shelter dog Rosco has been at SCRAPS for 190 days. 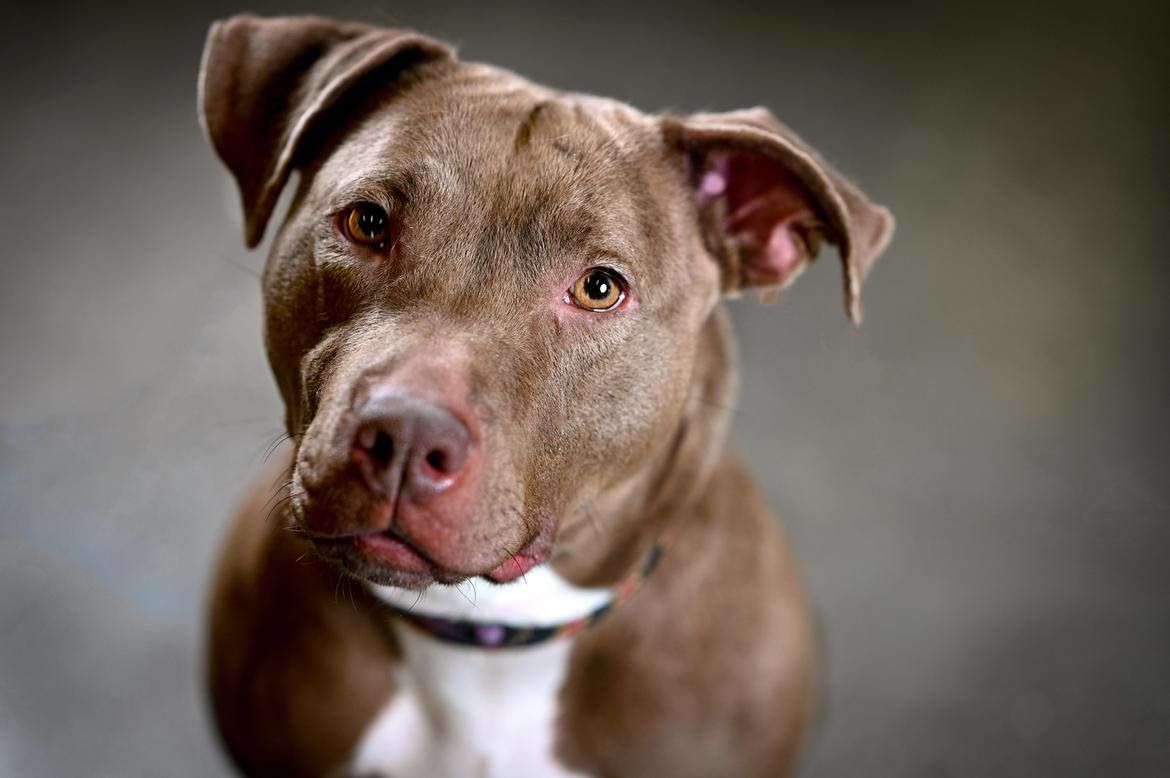 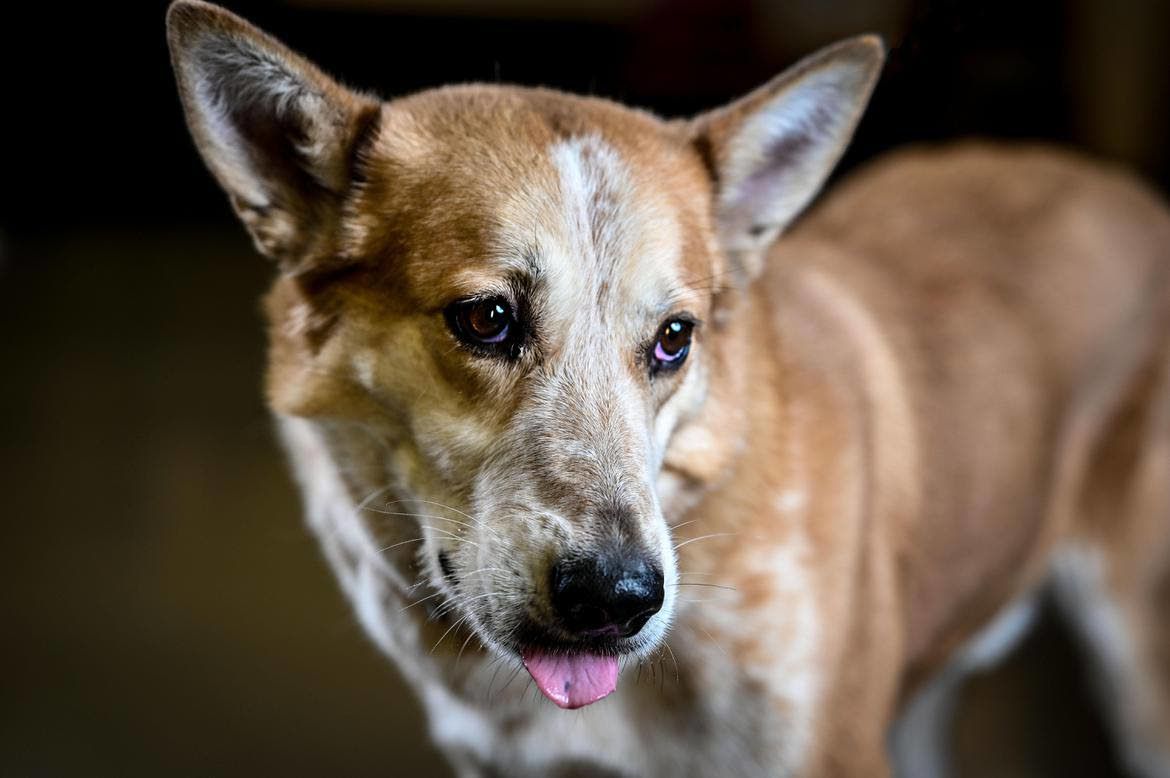 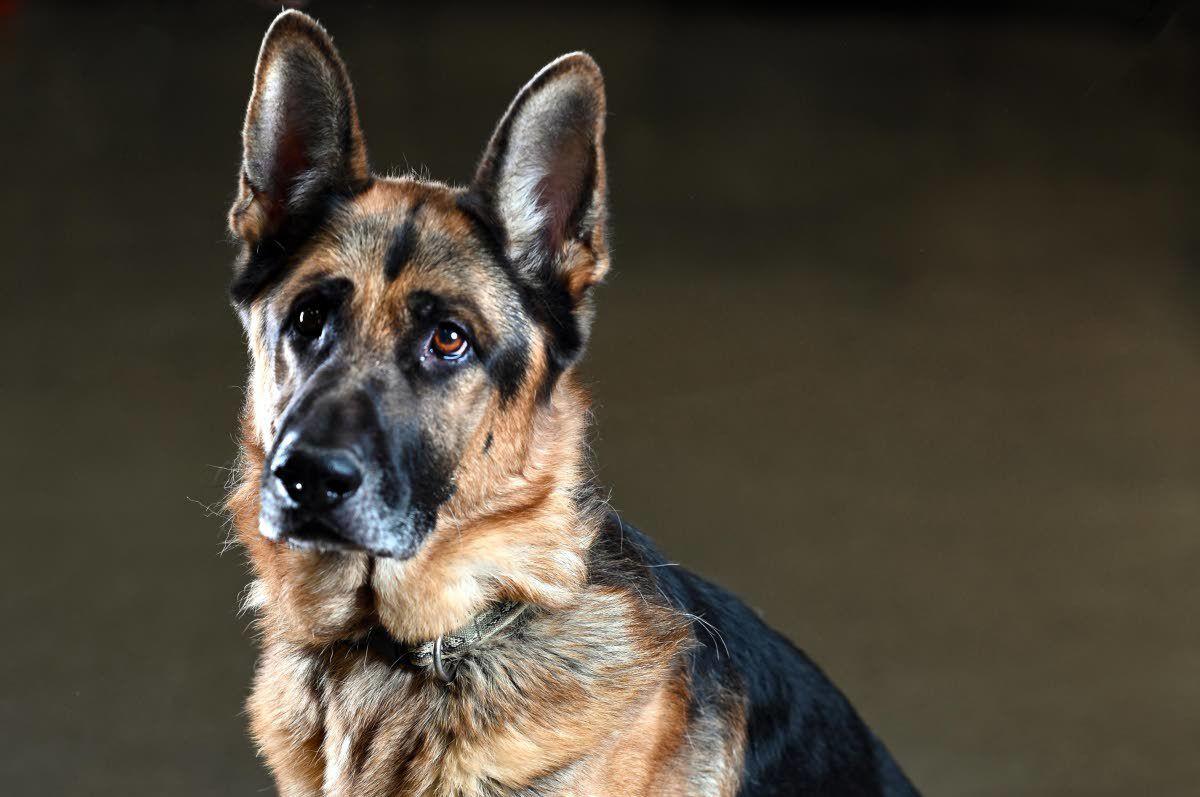 Shelter dogs (from left) Suko, Courage, Ruby and George has been at Spokane County Regional Animal Protection Service the longest. 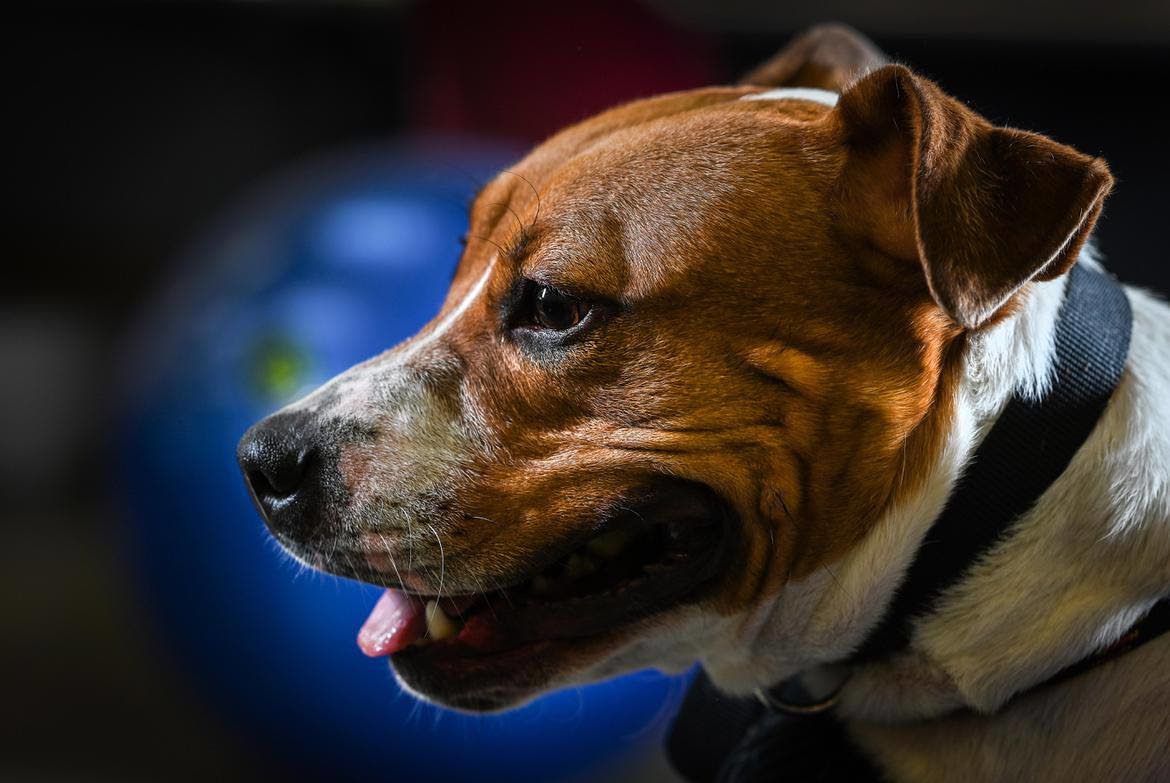 Shelter dog Rosco has been at SCRAPS for 190 days.

Shelter dogs (from left) Suko, Courage, Ruby and George has been at Spokane County Regional Animal Protection Service the longest.

SPOKANE — After a first glance at Rosco — a big, gray, muscular dog with a huge face, a wide-open mouth and a seemingly fierce demeanor — the reasons he has been at SCRAPS for 190 days, waiting to be adopted, might seem apparent.

But when he sat in an animal control officer’s lap on a recent afternoon, before resorting to rolling all over the visitation room floor, it was hard to believe Rosco doesn’t have a home.

The average stay for a dog at SCRAPS, or Spokane County Regional Animal Protection Service, is 10 days. For cats, it’s 21 days. But some animals — often those that belong to so-called “bully breeds,” such as pit bulls and German shepherds — have trouble finding a home.

Under previous SCRAPS policies, dogs like Rosco, with a long stay at the shelter and difficulty adjusting to kennel life, would have been euthanized. Over the past year and a half, new shelter Regional Director Lindsey Soffes has invested in training and medical care to make all their animals more adoptable, no matter how long it takes.

The shelter now only euthanizes animals when medically necessary because their quality of life has deteriorated or because they are a hazard to public safety.

Rosco is one of several dogs that have benefited from the new policy but has spent a significant portion of 2019 at the shelter. Staff and volunteers have hope that once people get to know Rosco and his sheltermates, they’ll finally find homes in 2020.

Here are the five dogs that have been at SCRAPS the longest:

Suko, a medium golden and red dog of unknown breed, has been at SCRAPS longer than any other animal. About 280 days ago, he was found roaming in Medical Lake scared and alone.

While Suko is playful, sweet and friendly to humans, he does not enjoy the company of his own kind. Suko is best suited for a one-dog home, and his new owner should avoid dog parks and other places where he would be in close proximity to other animals.

Soffes said Suko’s difficulties with other dogs is a common one and that, after more than nine months at the shelter, he just needs a home where he can be the only canine.

Weighing in at about 40 pounds, Courage is all energy and curiosity. He searched the entire room and made friends quickly when a visitor recently dropped by.

About 4 or 5 years old, Courage was a stray dog found in Spokane about 255 days ago. While he is friendly and playful, he also needs a one-dog family.

“He’s one of those dogs that we are really surprised is still here,” Soffes said. “Every now and then, we get these super amazing kiddos who we think would be amazing companions for most families.”

Soffes said the shelter is cautious about placing Courage with a family that has another animal. Potential adopters must set up several visits to see how the dog interacts with other animals from that home.

Soffes said having multiple visits with an animal is common before a person decides to adopt. She also encouraged people to bring their current pets to the shelter to meet a new dog before adopting it.

Only about knee-high, Ruby is the smallest of the long-timers at SCRAPS. She is also one of the most energetic and adventurous. Though a favorite at the shelter’s pup field trip program, Ruby has been at the shelter for 250 days. She was brought in by a dogsitter who said the owner did not want the dog back.

Soffes said Ruby enjoys car rides, playing with toys and hiking. She does not, however, enjoy the company of other dogs. Like Courage and Suko, Ruby needs to be adopted into a one-dog household. Soffes said she also needs to live in a home free of cats because she is a little too interested in them.

George is a friendly German sheperd who lives up to his nickname. He has been trained to shake paws and takes every opportunity to do so. He has become a shelter favorite during his 195-day stay.

While George does not have the same issues with other dogs as Suko and Ruby, he does need a family with the compassion and understanding to care for a traumatized animal. George was found tied to a tree in the Dishman Hills Natural Area.

Like many of his breed, he also struggles with the noise and chaos of a shelter environment, and may not act friendly or seem approachable while in his cage. Once he is in an open space and away from the clamor of the kennel, though, he’s a curious and engaged dog.

“He’s just one where we think he needs a little bit of the extra TLC because he has definitely suffered emotional trauma,” Soffes said. “Being abandoned and finding yourself in the shelter, it’s a scary place.”

Rosco, one of the biggest of the longtime dogs at the shelter, is friendly and affectionate. He has been at the shelter for 190 days. He was surrendered by his owners after he bit one of them in response to an attempt to force him into a dog crate. Since then, he has had behavior training and has not had further problems with reacting to people.

Rosco does not have the same difficulty with other animals as some of the other long-time shelter dogs, but he does not do well in a stressful kennel environment and often gets passed over for other dogs that have a better kennel presence.

“He will often like jump at the bars … bark and kind of run toward people approaching, but he is a completely different, playful, happy, relaxed dog when he’s out of his kennel,” Soffes said.

Soffes said kennel presence, ability to socialize with other animals, size and breed are all barriers for adoption.

She said landlords sometimes have size or breed restrictions on animals allowed in their apartments or may not allow dogs at all. In particular, she said, there are often stereotypes about pit bulls and German shepherds that can make them difficult to adopt out.

She recommended people considering adopting a new pet from a shelter make several meetings, even if they don’t already have an animal, before they make a decision

Soffes said about twice as many cats are taken to the shelter as dogs, but they are adopted much faster or can go to a foster home if it takes longer. Dogs are much more difficult to foster and far more rental units don’t allow them.

SpokAnimal, a local nonprofit shelter, does not have any long-term dogs, but the Spokane Humane Society has recently had several animals that stayed at the shelter for more than a year.

Spokane Humane Society executive director Sheila Geraghty said medical issues can be an issue that makes dogs difficult to adopt out, but it’s far more common for cats to have medical problems than dogs. Even then, however, cats are easier to adopt out than dogs.

Geraghty said the most common barrier for adoption, however, is still an animal’s behavior and, especially, its behavior when a potential family sees it for the first time in the kennel.

The first look often isn’t an accurate reflection of who a dog really is.

“I would say 90 percent of the time, once the volunteer gets in there, gets the leash around their neck and gets them out of the shelter into the open walking on their property into the play yard, it’s a totally different dog and that’s the dog that the public needs to see,” she said.