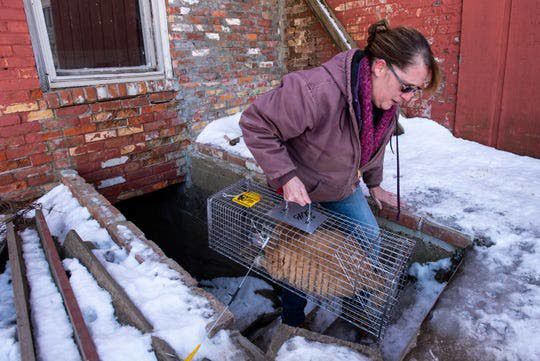 Carol Schmidt, president of the Sanilac County Humane Society, carries a trapped feral cat out of a building Feb. 21 in Croswell. The organization is working with the city of Croswell to potentially pay to have a bunch of cats captured and spayed and neutered because of a high number of feral cats in town. 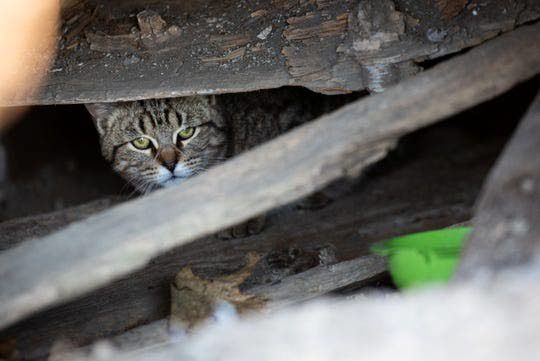 A stray cat looks out from underneath a building Feb. 21 in Croswell, Mich.

Carol Schmidt, president of the Sanilac County Humane Society, carries a trapped feral cat out of a building Feb. 21 in Croswell. The organization is working with the city of Croswell to potentially pay to have a bunch of cats captured and spayed and neutered because of a high number of feral cats in town.

A stray cat looks out from underneath a building Feb. 21 in Croswell, Mich.

PORT HURON, Mich. — Carol Schmidt crept down a small stairwell at the back of an old empty brick building in downtown Croswell on Friday morning to retrieve a cat trap.

The building, known for attracting a lot of feral cats, was one of several spots traps that had been set up by Schmidt, president of the Sanilac County Humane Society. She’d already caught 17 cats as part of an effort with the city of Croswell to spay or neuter as many as 40 before releasing them back outside, the Times Herald reported.

An orange-colored male squirmed inside the temporary cage as she pulled it from the building, hissing at her.

“Oh, my big Tom! You’ve been in fights, buddy. It’s OK, it’s OK. I know, you’re angry,” Schmidt said. The cat appeared to have bloody scratches at the back of each ear. Schmidt carefully placed a blanket over the trap in the back of the humane society’s van.

“You want to get them covered because it’ll calm them down,” she said. “I’m going to guess it’s prime-time mating season. Somebody has boxed his ears pretty good. He’s probably got ear mites real bad, so while he’s out getting fixed, they will treat his ears, clean up the sores. They give him a shot of antibiotics anyway.”

He said several businesses had started an open dialogue downtown with a core group of residents looking after the cats. Now, he said they were “getting to the point where they were getting overwhelmed.”

Moore didn’t have an official count of the cats loose in Croswell but estimated it was around 60.

“There’s just so many cats, we’re going to have to start scooping them off the road with a shovel, and we didn’t want to see that happen,” he said, citing the danger that could be posed.

“It’s a start on the cat management plan,” he said, adding the city was willing to put up about $1,500. “We’ll still try to work with the other ones we don’t get. We’re trying to cub (it). We just don’t want it to get worse.”

Mayor Mike McMillan said he, too, had the “hope of preventing more cats from coming.”

He said they were also still looking for community input on the issue and encouraged residents to contact city hall.

Moore said if anyone was interested in adopting a cat, many of the cats involved would “make a wonderful outdoor cat or barn cat.”

The Michigan Department of Agriculture and Rural Development announced in the last week it was distributing $127,240 in animal welfare fund grants to 23 registered animal shelters around the state to support spaying and neutering of shelter dogs and cats to help them be more adoptable.

Both the Sanilac County Humane Society and St. Clair County Animal Control were among the recipients with $7,000 and $6,000 awards, respectively.

Schmidt said their group will spend the money first, but the grant will reimburse their costs.

“It’s a big help to us because it helps pay the vet bills for the animals we’re trying to get adopted out,” she said.

On the average, providing no-complications, Schmidt said it costs roughly $120 and $70, respectively, to spay and neuter dogs and cats.

All animals adopted out, she said, are always fixed. Between the second weeks of January and February, she said about 40 animals found homes, “which is fantastic for us.”

“We hope the trend continues. That’s a lot. We had a bunch of kittens and a bunch of puppies. If we have all adult animals, we don’t move that quantity that fast,” Schmidt said.

Feral cats in Croswell on Thursday and Friday were being taken back to Putt’in 4 Paws, a miniature golf place in Lexington the humane society owns and where a new clinic’s going up, before being taken to the shelter at Carsonville.

Schmidt said she expected to wrap up catches by Saturday morning with spay-and-neuter surgeries taking place Saturday and Sunday.

She said they were getting a lot of help from volunteers and people around Croswell who were watching out for cats near their home or business.

“There’s a lot of good people that want to help,” Schmidt said. But she said it costs the community to allow the feral cat issue to fester.

Motioning to the empty industrial building, she said it was the sort of place that could attract a lot of rats — something else that cats helped keep in check. The catch-and-release effort, she said, would still do that while also still curbing too many future litters of kittens.

“Personally, I’d rather have cats than rats,” Schmidt said.