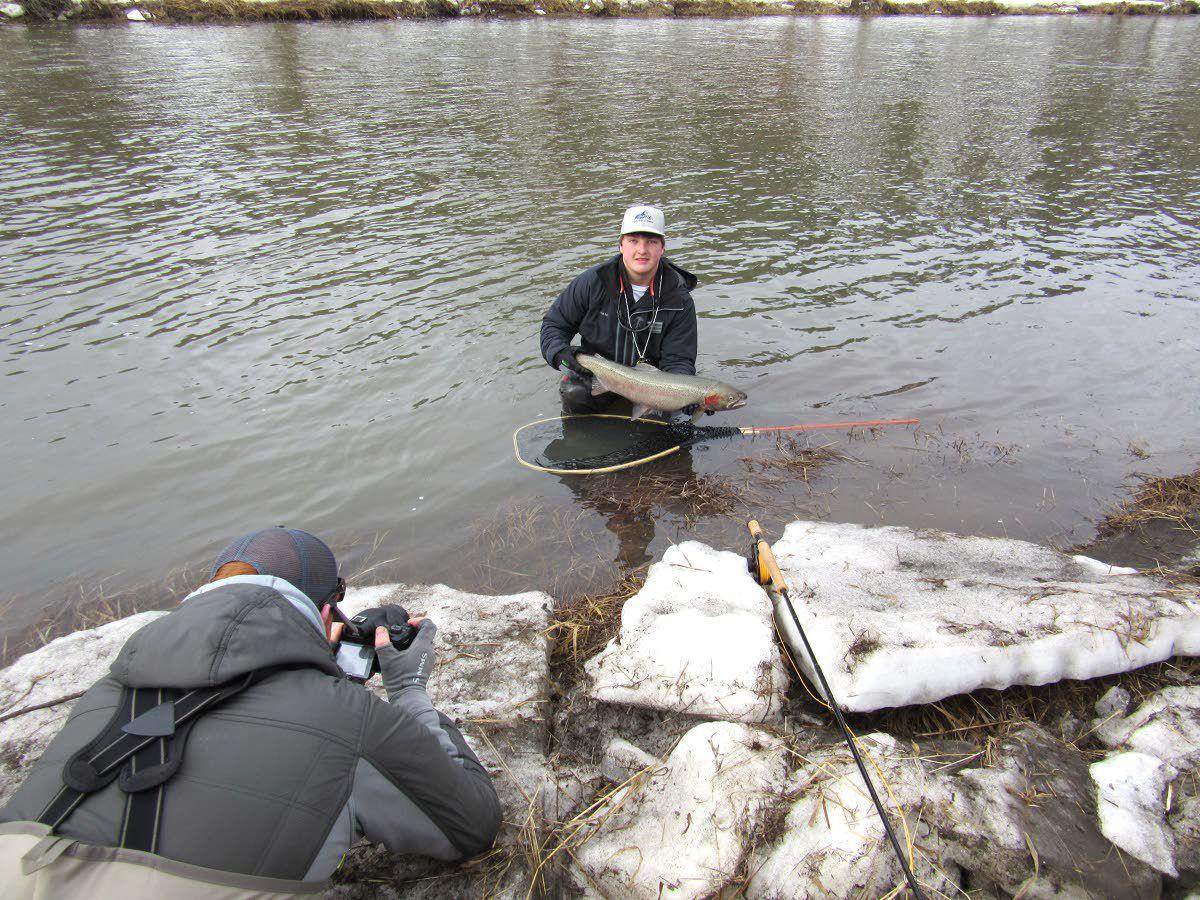 An angler lifts a wild steelhead from the water for a picture. 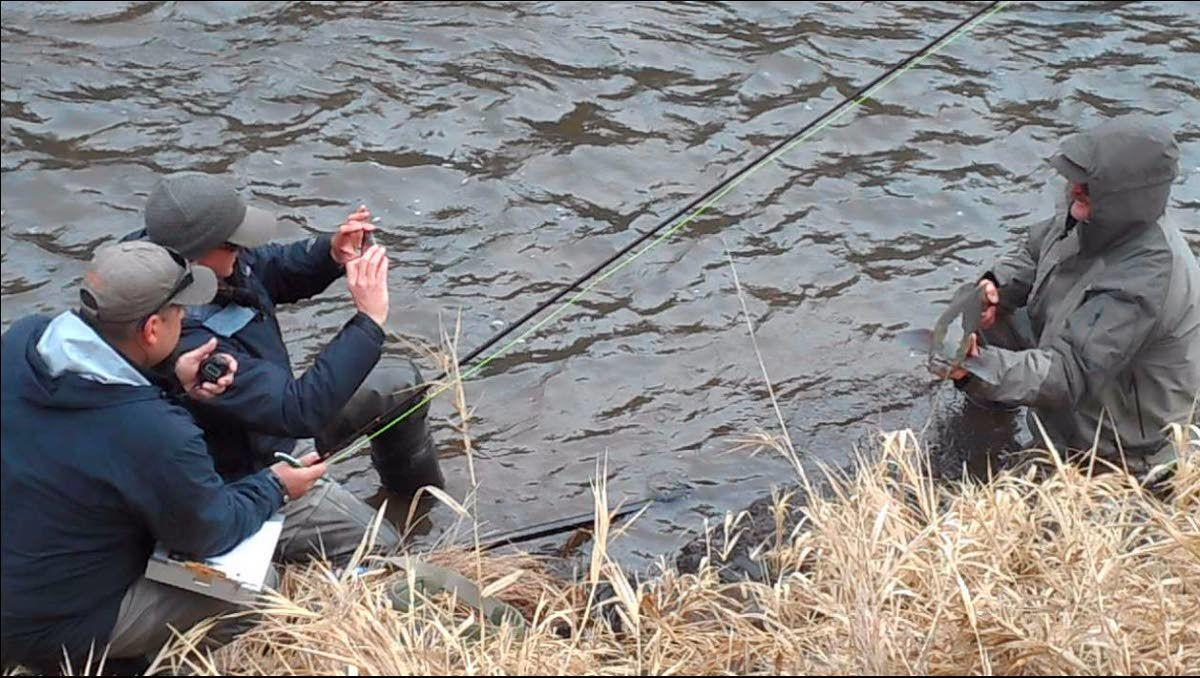 An angler lifts a steelhead out of the water for a picture and is timed by a researcher. A study by the Idaho Department of Fish and Game found such practices did not affect survival of the fish or the fitness of their offspring. 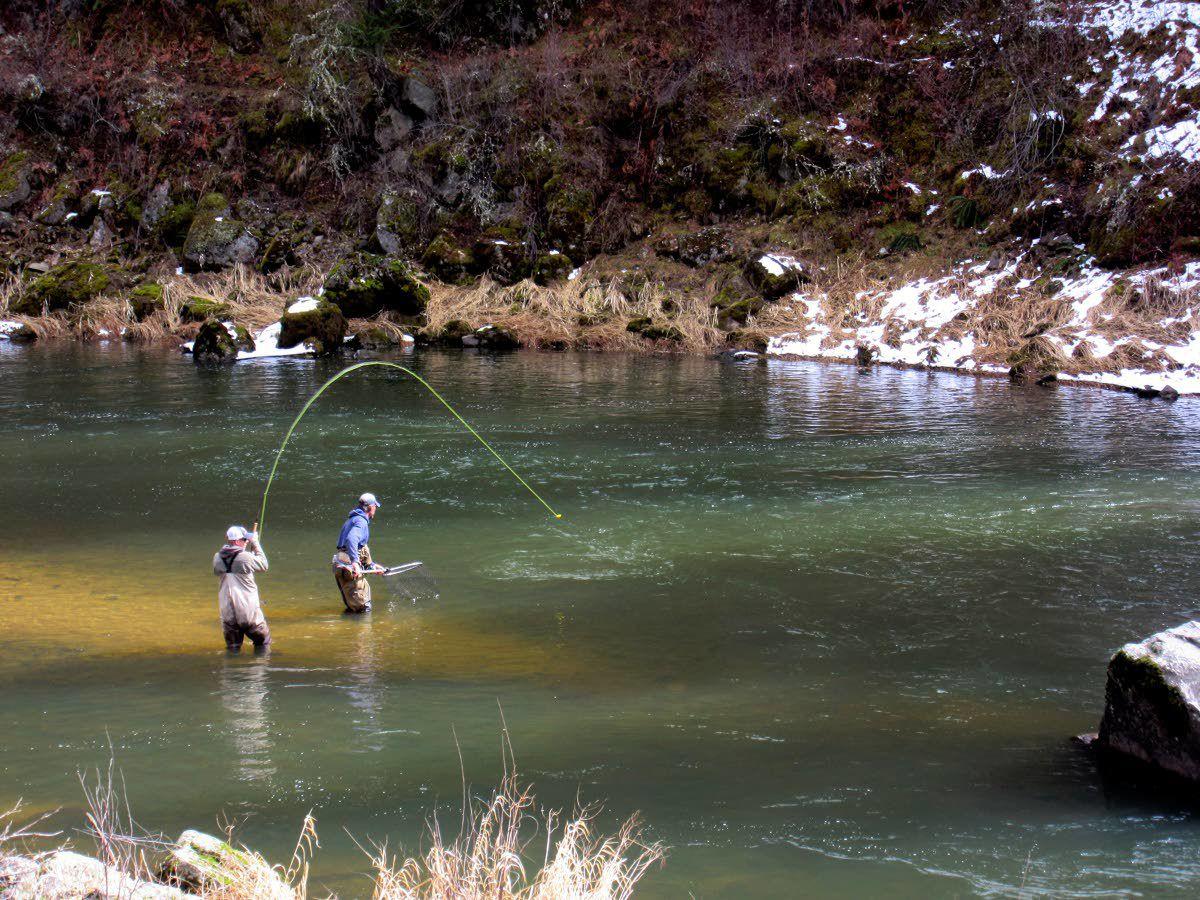 An angler fights a steelhead in the South Fork of the Clearwater River. Recent studies by the Idaho Department and Fish and Game and University of Idaho show that catch-and-release fishing and practices such as breifly removing fish from the water prior to release don't have a harmful effect on the population of resident trout and steelhead.

An angler lifts a wild steelhead from the water for a picture.

An angler lifts a steelhead out of the water for a picture and is timed by a researcher. A study by the Idaho Department of Fish and Game found such practices did not affect survival of the fish or the fitness of their offspring.

An angler fights a steelhead in the South Fork of the Clearwater River. Recent studies by the Idaho Department and Fish and Game and University of Idaho show that catch-and-release fishing and practices such as breifly removing fish from the water prior to release don't have a harmful effect on the population of resident trout and steelhead.

A series of related studies by the University of Idaho and the Idaho Department of Fish and Game in recent years shows that the amount of time anglers are fighting both steelhead and resident trout and the short periods some of them expose their fish to the air before release do not significantly affect fish survival or reproductive success.

Researchers found that anglers are efficiently landing both trout and steelhead, and that when they remove them from the water, to take a picture or just to facilitate unhooking, the duration is short.

The studies come at a time when some anglers and conservation groups are questioning the lethal and sublethal effects of catch-and-release fishing. For example, last fall the potential mortality caused by catch-and-release fishing, the use of bait as a method of catch and exposing fish to the air prior to release, was a central argument made by a coalition of conservation groups that sought to shut down or alter Idaho’s steelhead fishery. The groups said that the return of wild steelhead to Idaho rivers this fall was so low that all fishing should be stopped or that practices such as fishing from boats, using bait and lifting wild fish from the water prior to release should be banned.

During the monthslong back and forth that led to an agreement that saved the steelhead season, state fisheries managers insisted that regulations such as banning removing wild fish from the water, the use of bait or fishing from boats would not lead to significantly higher survival rates for wild fish.

Six recent studies seem to back up their position. The body of research began with studies aiming to learn how long Idaho anglers fight both resident trout and steelhead and how long the fish are held out of water.

Researchers in two studies covertly observed anglers and timed their fishing practices. They include a 2016 study published in the North American Journal of Fisheries Management by James Lamansky Jr. and Kevin Meyer that revealed anglers exposed trout to air for intervals that averaged about 29 seconds and only 4 percent of anglers held trout out of water for more than 60 seconds. Fight time averaged about 53 seconds. When photos were taken, it extended the time out of water by an average of 10 to 20 seconds.

A 2016 study published in the Fisheries Research by then University of Idaho graduate student Curtis Roth, now a fisheries biologist for Idaho Fish and Game at Salmon, showed anglers on the South Fork of the Snake River fought trout for an average of 40 seconds and more than 83 percent landed fish in less than 60 seconds. The average time fish were lifted from the water was about 19 seconds, and 99 percent of anglers held fish out of water for less than 60 seconds.

In 2016 and 2017 Idaho Fish and Game biologists Luciano Chiaramonte, Don Whitney and Joshua McCormick found steelhead anglers on several Idaho rivers exposed fish to air for intervals of about 28 seconds, and 88 percent did so for less than 60 seconds. They documented that when anglers took a photo of a steelhead, they held it out of the water about 1.7 times longer than those who didn’t take photos. Fight time averaged 130 seconds, and those using fly fishing gear took an average of 1.54 times longer to land fish than those using traditional gear. The work was published in the North American Journal of Fisheries Management.

Roth led two more studies published in the North American Journal of Fisheries Management — one that evaluated the effects of air exposure on cutthroat, rainbow and bull trout on short-term survival and another that looked at the effects on short- and long-term survival of Yellowstone cutthroat trout and the effects on their reproduction success after being caught, exposed to the air and released.

In one study, he and his colleagues used hook and line to catch and tag the fish from a handful of southeastern Idaho streams and then exposed them to the air for intervals for 0, 30 and 60 seconds. They later recaptured the trout through electro-fishing, where a low current is applied to the water that causes fish to be momentarily incapacitated. They found no difference in survival among all three groups.

In another study, this one lasting two years, Roth and colleagues used a weir on Burns Creek, a tributary to the South Fork of the Snake River, to capture and insert tiny passive integrated transponder, or PIT, tags in more than 1,500 Yellowstone cutthroat trout that were moving upstream to spawn. They exposed the fish to simulated angling events lasting 102 seconds and exposed them to the air for intervals of 0, 30 and 60 seconds, obtained unique genetic samples from each fish and then released them above the weir. The study also included a control group that was neither exposed to air or simulated angling.

To measure short-term survival, they used a PIT tag detector below the weir that recorded the fish as they left the stream after spawning. Long-term survival was measured via genetic analysis of fish that returned to the weir the following year. They later captured juvenile fish known as fry and used genetic analysis to measure how many of the young fish were offspring of adults in the study. They were unable to record a significant difference in survival or reproductive success between the different groups of fish based on air exposure.

“In all the studies we did, we didn’t see any effect on survival and reproductive success, and we tried to mimic actual angler fight time and air exposure times,” Roth said.

In the final study, Idaho Fish and Game biologist Don Whitney at Lewiston took advantage of a program on the South Fork of the Clearwater River where anglers are enlisted to catch steelhead that are temporally held in plastic tubes and then taken into a hatchery to be spawned. The program is designed to build a steelhead run that is specifically honed to return to the South Fork.

Whitney recorded both fight time, which averaged 164 seconds, and air exposure, which averaged 23 seconds after being caught and 28 seconds while being transferred to the hatchery. He then tracked their survival at the hatchery as well as the survival of their offspring. Over the three years of the study, 97 percent of the steelhead survived until spawning compared to a survival rate of about 91 percent for steelhead that swam into the hatchery on their own.

Results indicated that neither fight time nor air exposure increased mortality prior to spawning. Nor did it decrease the survival of their offspring. The study has been accepted for publication in the North American Journal of Fisheries Management.

Whitney said his studies and those by Roth and others all show no need to change fishing regulations to protect against potential effects of fishing or air exposure on either adult fish or their progeny.

He said there have been previous studies where fish were fought or held out of water for much longer time periods.

“Some studies hold fish out of water for 5 or ten minutes. Honestly you would think you would see an effect (at those air exposure times), but the point is what anglers are actually doing in the fishery,” he said.

Michael Quist, an associate professor of fisheries management at the University of Idaho’s College of Natural Resource who was one of the co-authors of the papers by Roth and has followed the department’s work, said the conclusion of all the studies is clear.