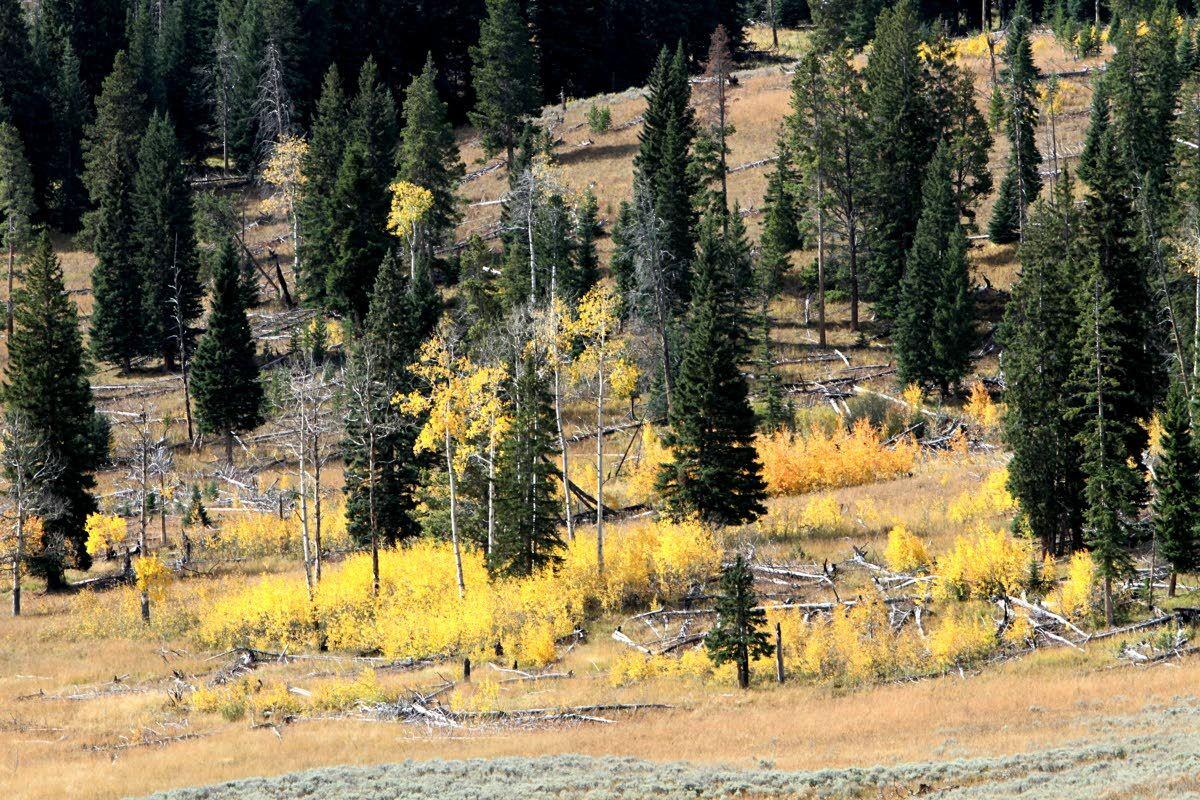 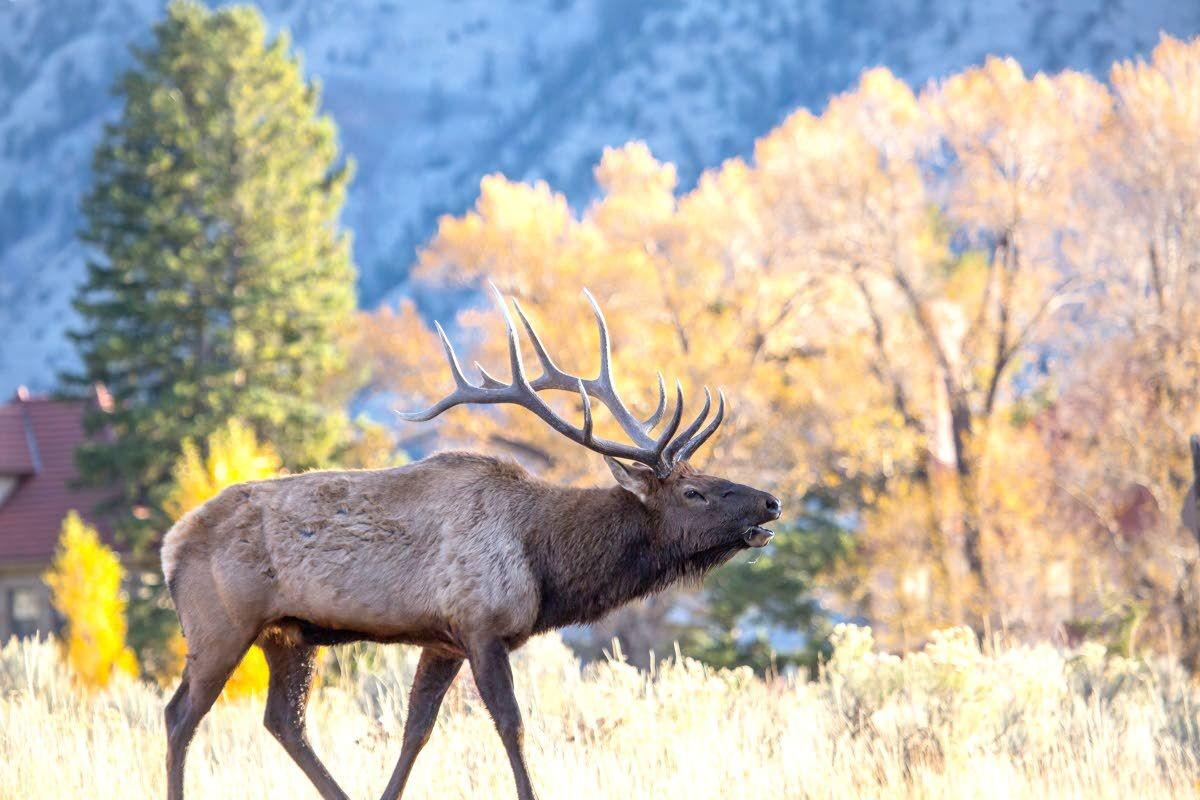 A bull elk bugles at Mammoth Hot Springs with aspen and cottonwood trees in the background.

These three photos show the loss of an aspen stand in northern Yellowstone National Park despite the reintroduction of wolves. This stand was located on the western shore of the Lamar River. The 1954 and 1992 images are aerial photographs from Larsen and Ripple (2005) and the 2015 image is a satellite product from Google Earth. White arrows point to the location of a sampling plot (#63) measured in the current study. Dead and downed aspen trees are visible on the ground as white lines in the 1992 image and are also visible in the 2015 image when viewed at a larger scale in Google Earth. The area did not burn in the interval 1954-2015. 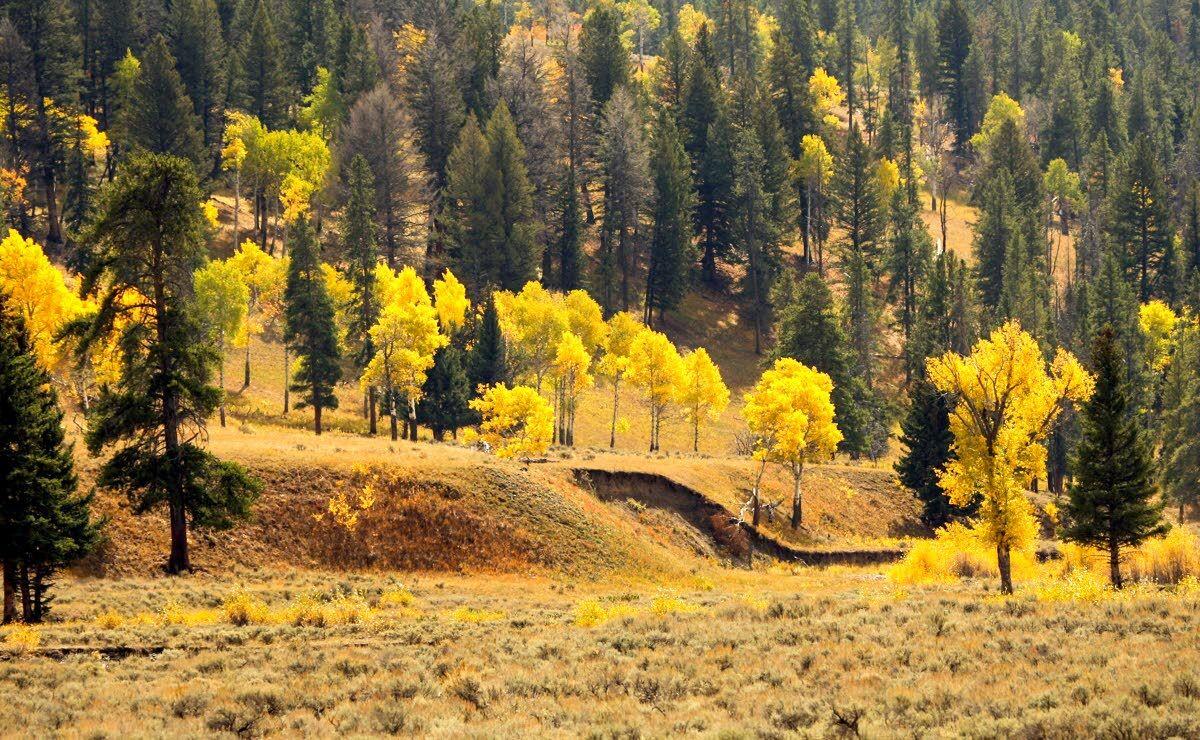 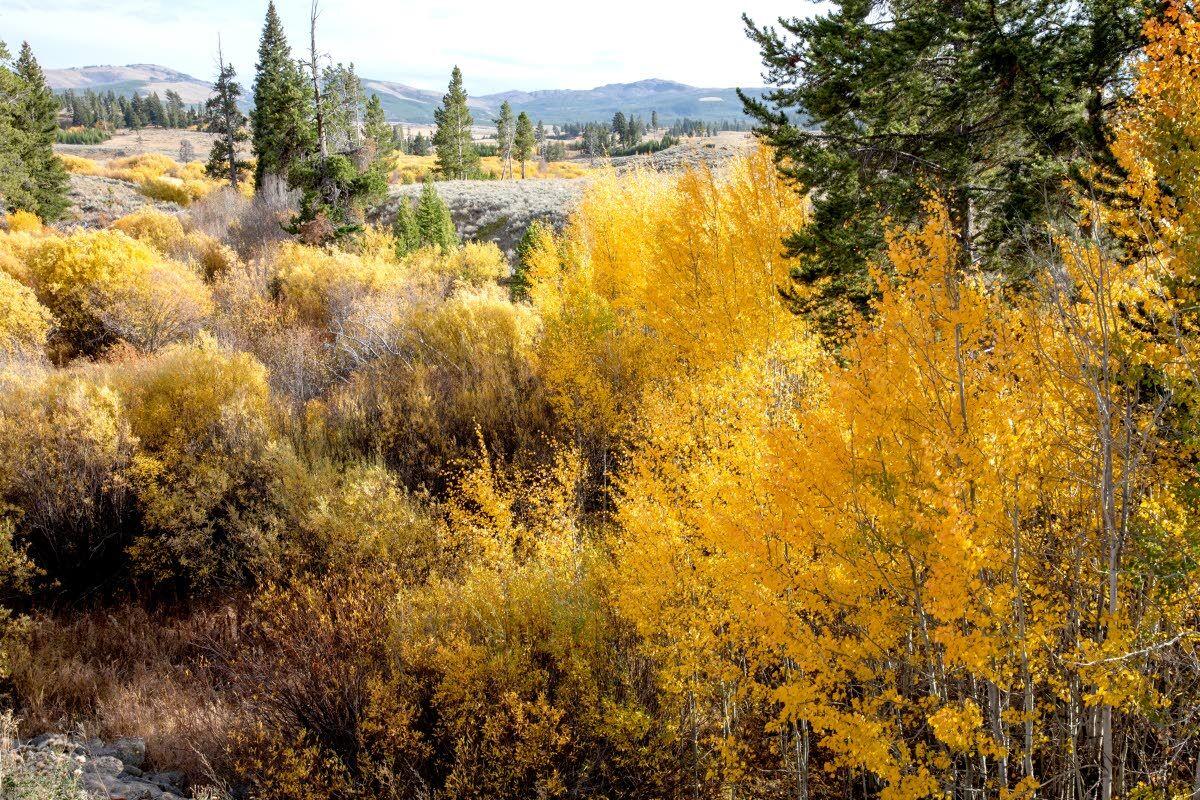 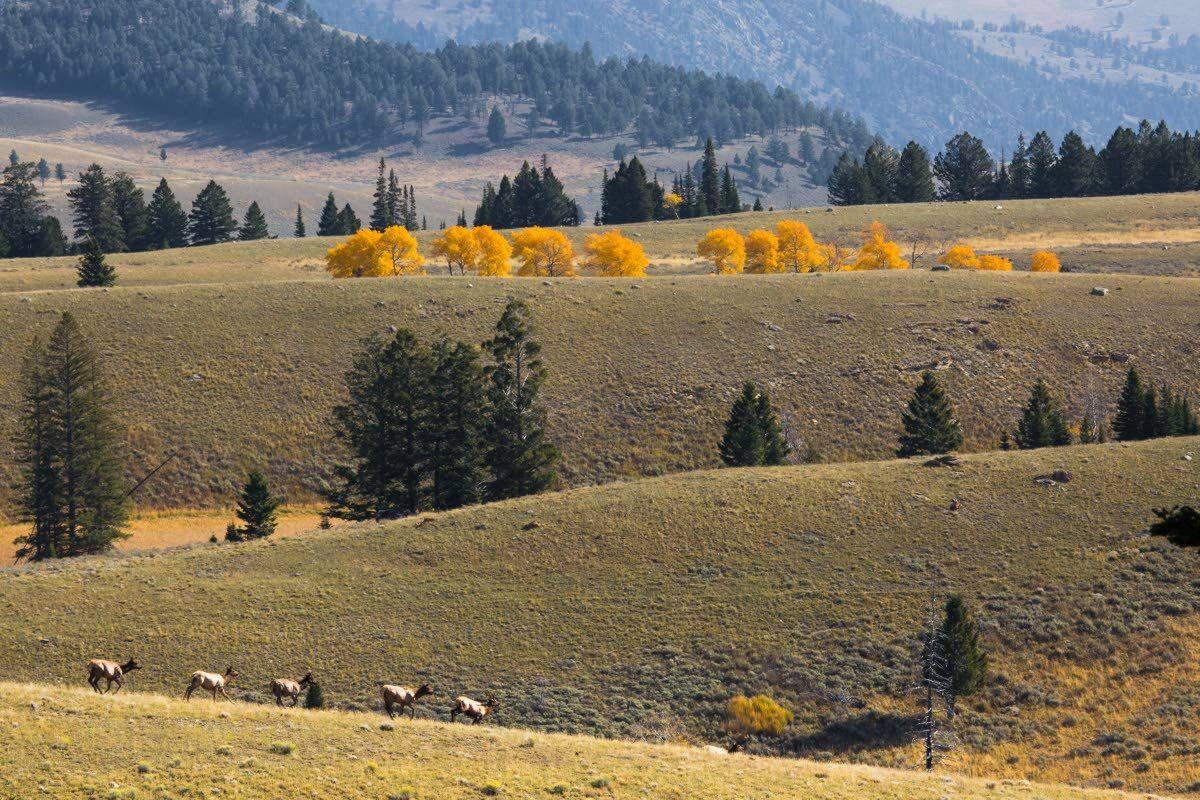 A small herd of elk run across a ridge at Yellowstone National Park.

A bull elk bugles at Mammoth Hot Springs with aspen and cottonwood trees in the background.

These three photos show the loss of an aspen stand in northern Yellowstone National Park despite the reintroduction of wolves. This stand was located on the western shore of the Lamar River. The 1954 and 1992 images are aerial photographs from Larsen and Ripple (2005) and the 2015 image is a satellite product from Google Earth. White arrows point to the location of a sampling plot (#63) measured in the current study. Dead and downed aspen trees are visible on the ground as white lines in the 1992 image and are also visible in the 2015 image when viewed at a larger scale in Google Earth. The area did not burn in the interval 1954-2015.

A small herd of elk run across a ridge at Yellowstone National Park.

Following the reintroduction of wolves to Yellowstone National Park in 1995-97, the regrowth of aspen trees became a worldwide story, highlighting the importance of large predators.

The wolves ate elk, which browsed on aspen. When elk numbers fell, aspen stands rebounded and birds and beavers returned. Such ecological effects caused by the addition, or removal, of a top predator are called trophic cascades.

Although some scientists long questioned the direct effect in Yellowstone, a recently published study shows aspen regrowth was not as robust as originally advertised.

Elaine Brice and Dan MacNulty, from Utah State University’s Department of Wildland Resources and Ecology Center, and Eric Larsen, from the University of Wisconsin Stevens Point’s Department of Geography and Geology, outlined their research in the Nov. 8 publication of Ecology Letters.

At its core, the research questions the methodology used to measure aspen for the earlier research, saying the choice of which trees to include skewed the study.

MacNulty et al. found that by choosing the five tallest young trees to represent the stand, researchers tended to pick out “the top-performing ~10%–15% of young aspen in stands that have survived to the 20th and 21st centuries.”

“It’s a complicated story,” MacNulty said in a phone interview. “The effect that has been described in numerous publications is an exaggerated effect because they measured the highest performing plants.”

He compared it to a teacher only picking students who get As and saying they represented the entire classroom.

One of the problems of relying on only the tallest young aspen trees is that elk are very discerning about which aspen they eat. They prefer trees that are no taller than their shoulders, ones less than about 6.5-feet tall – a fact verified by game cameras – but will keep eating trees as tall as 13 feet.

As the trunk of a young aspen grows taller than an adult elk’s shoulder, it is decreasingly likely to be eaten, MacNulty said.

“This means that the tallest young aspen grow faster because they are taller, not because wolves reduce elk browsing,” he said in a statement.

Instead of relying on the five tallest young aspen in a stand, the scientists should have made their sampling more random, MacNulty and his colleagues assert. When randomized, fewer aspen trees exceed what the researchers call preferred browsing height.

“These are extremely complex systems, and understanding them is a major challenge because they are difficult to properly sample,” Brice said.

Using a random sample, the researchers still found evidence of a trophic cascade. After all, the elk population in the park plummeted from around 19,000 on the Northern Range, where wolves concentrated after being released in 1995, to about 6,200 this year.

That large of a drop in the number of big animals that browse and graze is bound to show up in the environment. But the effect was much weaker than some of the earlier analyses showed, MacNulty and his colleagues found.

The study concluded, “Understanding how ecosystems respond to the loss and/or addition of large predators is vital to resolving broader debates about the forces that structure food webs, determine species abundance and deliver ecosystem services. Our study, which focused on a textbook example of large predator extirpation and reintroduction, demonstrates how deviations from basic sampling principles can distort this understanding. Non-random sampling overestimated the strength of a trophic cascade in the system we studied, but it may underestimate cascading effects in other systems.”

Matt Kauffman, of the Wyoming Cooperative Fish and Wildlife Research Unit, has also conducted studies in Yellowstone, including one that looked at browsers’ effects on aspen. He praised MacNulty, Brice and Larsen for their work to “correct this important ecological story.

“Ecological research is messy and often requires long-term data and rigorous analyses to get the story right,” he wrote in an email. “Studies like these are critically important, especially when we are talking about science that might inform the decision of how to manage a species as controversial as wolves in the Northern Rockies.”

Bob Beschta, professor emeritus at Oregon State University, partnered with his colleague William Ripple on many of the earlier studies in Yellowstone documenting trophic cascade. In their research, the scientists used the five tallest young aspen, the sampling method MacNulty and his colleagues find less accurate. Yet Beschta doesn’t see it that way.

He said it took MacNulty and his coworkers two decades to verify what he and Ripple had already asserted, the loss of elk led to aspen regeneration. He said using the five tallest trees proved to be “a bit prophetic.

“There are numerous ways to measure plant communities,” he said. “To claim only one is right is a bit presumptuous.

“We decided to work with the five tallest because we could see something was happening,” he added.

Beschta said he and Ripple were careful to not say that their numbers represented the average aspen, instead referring to them as the “leading edge indicators.

“Their results confirm that. Our results indicated that was coming,” he said.

Although MacNulty and his colleagues reference a number of other factors that can affect plant growth, Beschta said those all pale in comparison to the effect of browsing. Reducing grazing allows plants to grow, he added. Without such a cutback, plants aren’t going to thrive.

The difficulty of separating out cause and effect on a landscape inhabited by so many species that includes other grazers – like a growing population of bison – and one that includes so many top predators such as grizzly bears, cougars and black bears – is difficult. Throw in the threat of climate change and the ecological stew becomes even cloudier.

No matter the outcome, the studies have all highlighted the importance of aspen and predators, both of which are in decline.

As the climate has warmed, Yellowstone’s forests have burned and elk and wolf populations have surged and ebbed; aspen groves have also varied. Analysis of historic landscape photographs dating back to the 1880s provided estimates that aspen once covered 4 to 6 percent of the park’s Northern Range. By the 1990s, aerial photography showed that had decreased to around 1 percent.

“Aspen forests are important for biodiversity; they support a greater variety of plant associations than the typical conifer forests of the area, as well as increase bird species richness and total abundance,” wrote John Klaptosky, a biological science technician in the vegetation department at the Yellowstone Center for Resources.

“Northern Yellowstone is right at the margin of moisture requirements for aspen,” MacNulty said. “There are some stands that have disappeared, probably because of moisture stress.”

He praised his colleague in the study, Eric Larsen, for building a database on aspen in Yellowstone beginning in 1999. “He’s faithfully visited nearly all these plots nearly every year,” MacNulty said. “That allowed us to do a real direct comparison that others weren’t able to make.”

Forty-one wolves were eventually reintroduced to Yellowstone. In the elk-rich environment, their population exploded to 174 animals by 2003 before declining. In January, the park’s wolves numbered 123.

Wolves aren’t the only predators of elk. From 1995-2002, the late cow elk hunt near Gardiner, just outside Yellowstone’s northern border, removed between 940 and 2,465 elk a year. “The total number of hunter-harvested elk during winter 1996–1997 represented the second largest removal of elk (3,320 animals) in the natural regulation era,” park researchers wrote.

“We tend to want to say that the change in elk herds is because of hunting or because of predators, but both of these forces were acting together,” MacNulty said. “So any subsequent cascade effect is due to these combined forces.”

French may be contacted at mailto:french@billingsgazette.com.