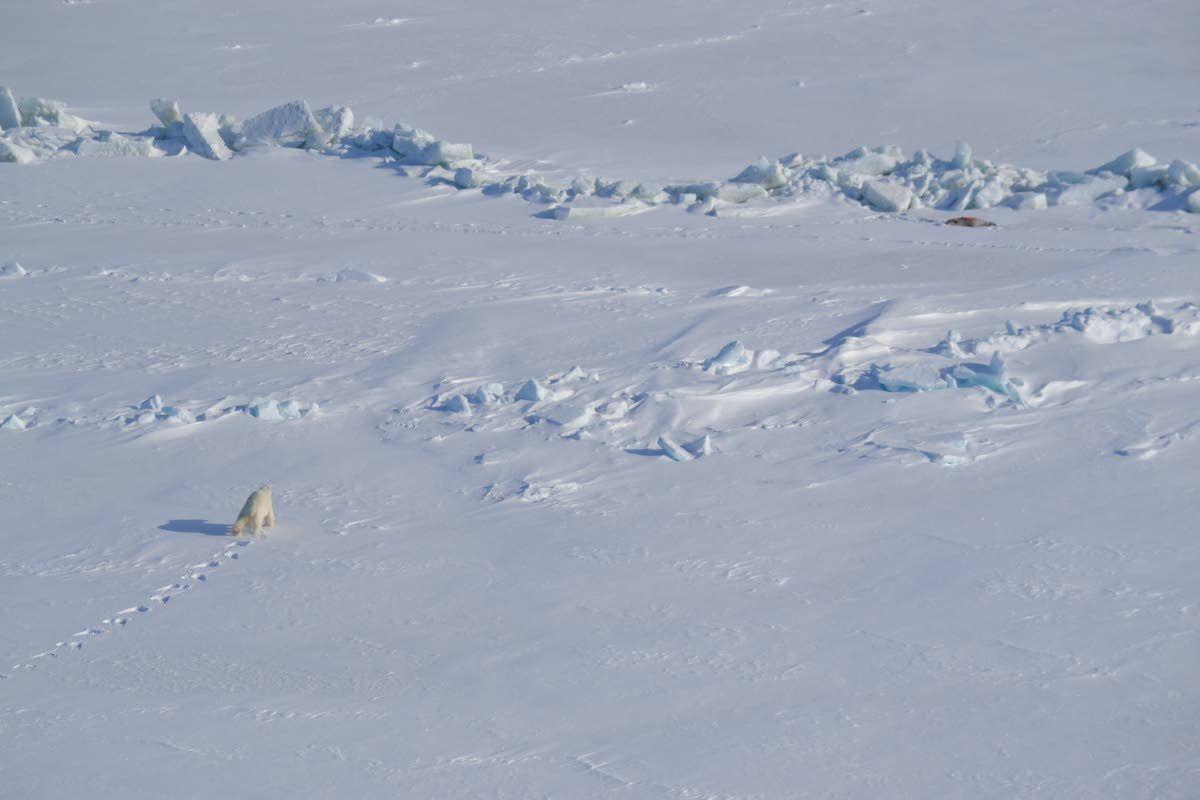 An adult male polar bear on the Chukchi Sea walks toward a seal (upper left). A recent study indicates both wild and captive polar bears thrive on a high fat, low protein diet and can suffer poor health if protein intake is too high. 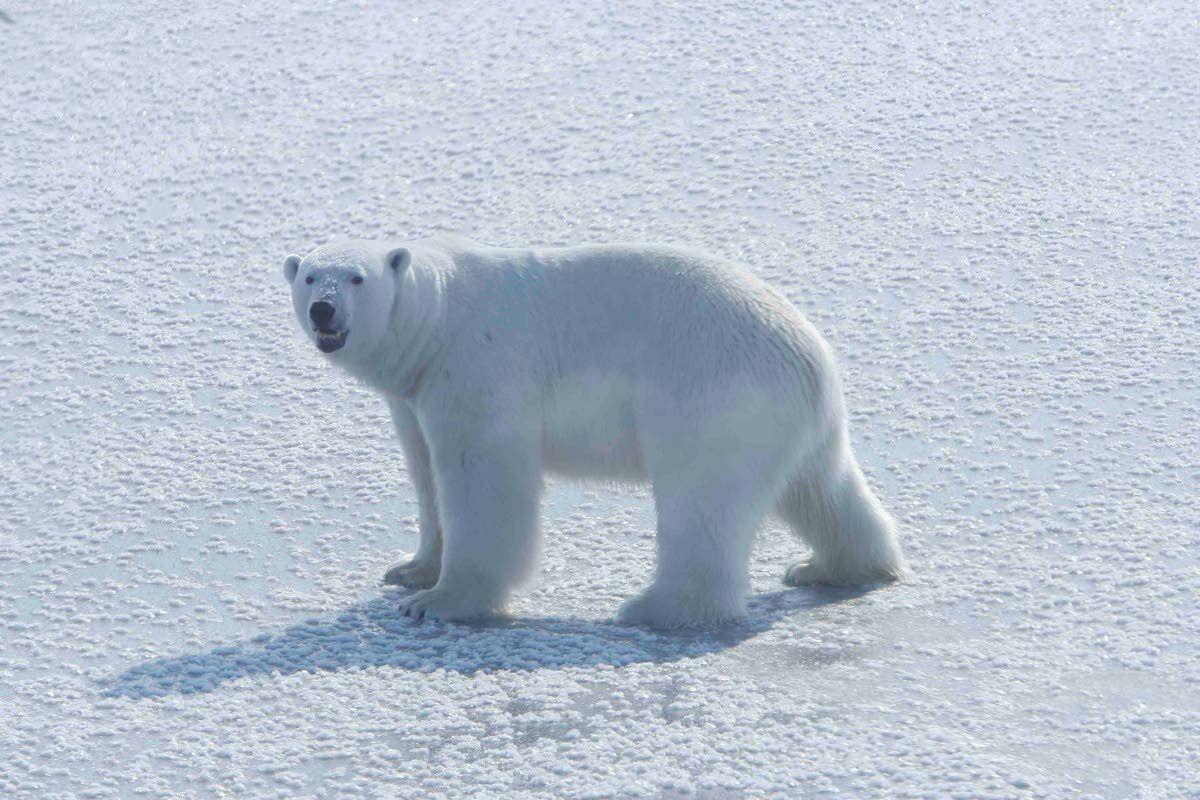 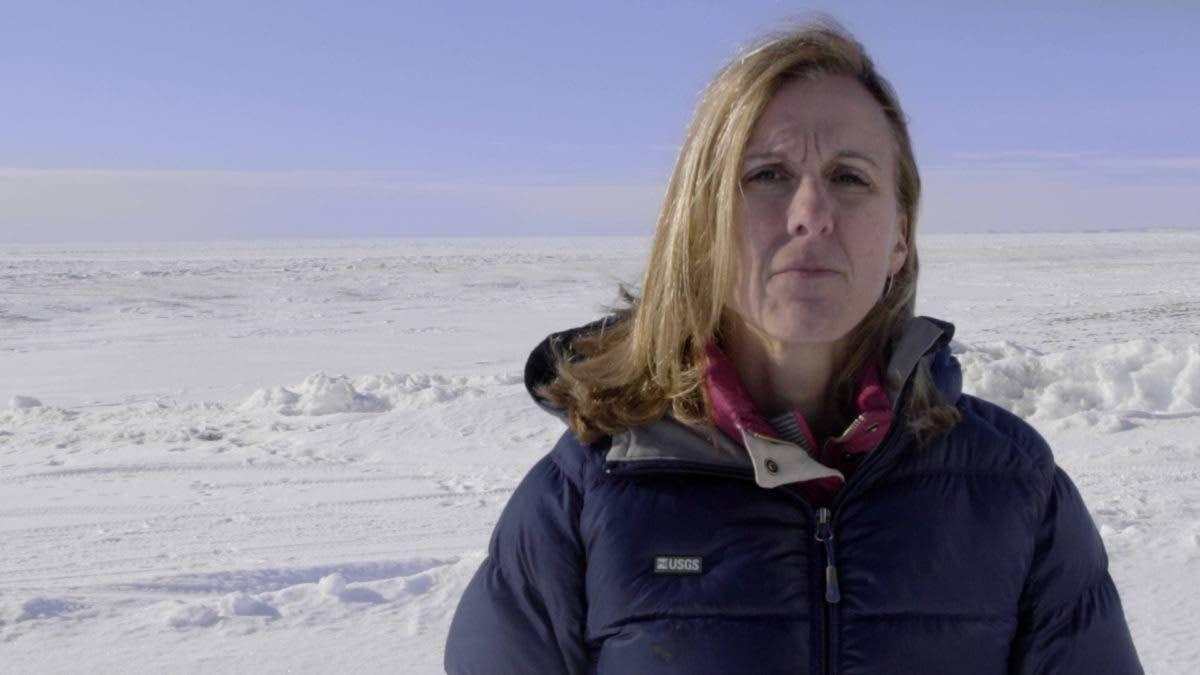 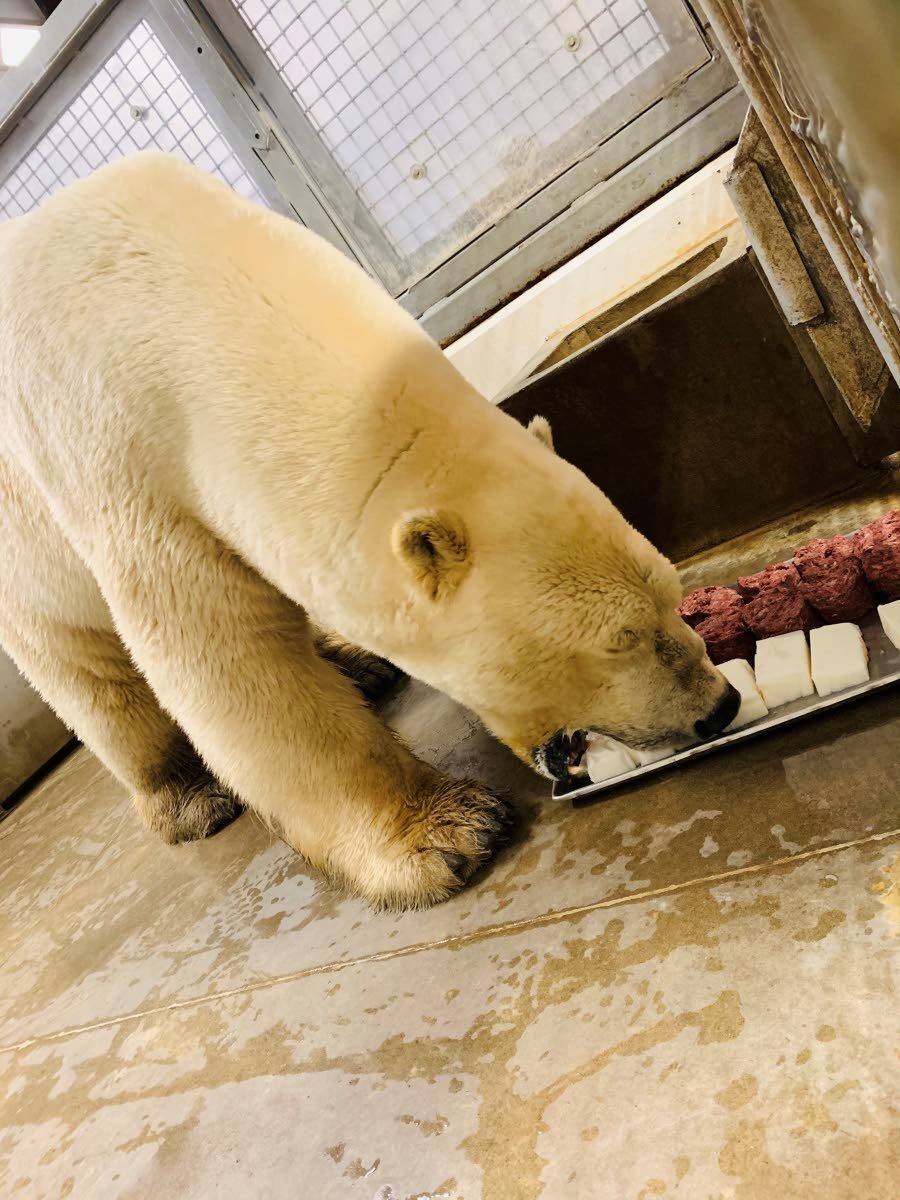 A polar bear at Columbus Zoo chooses lard over lean meat during a dietary experiment. 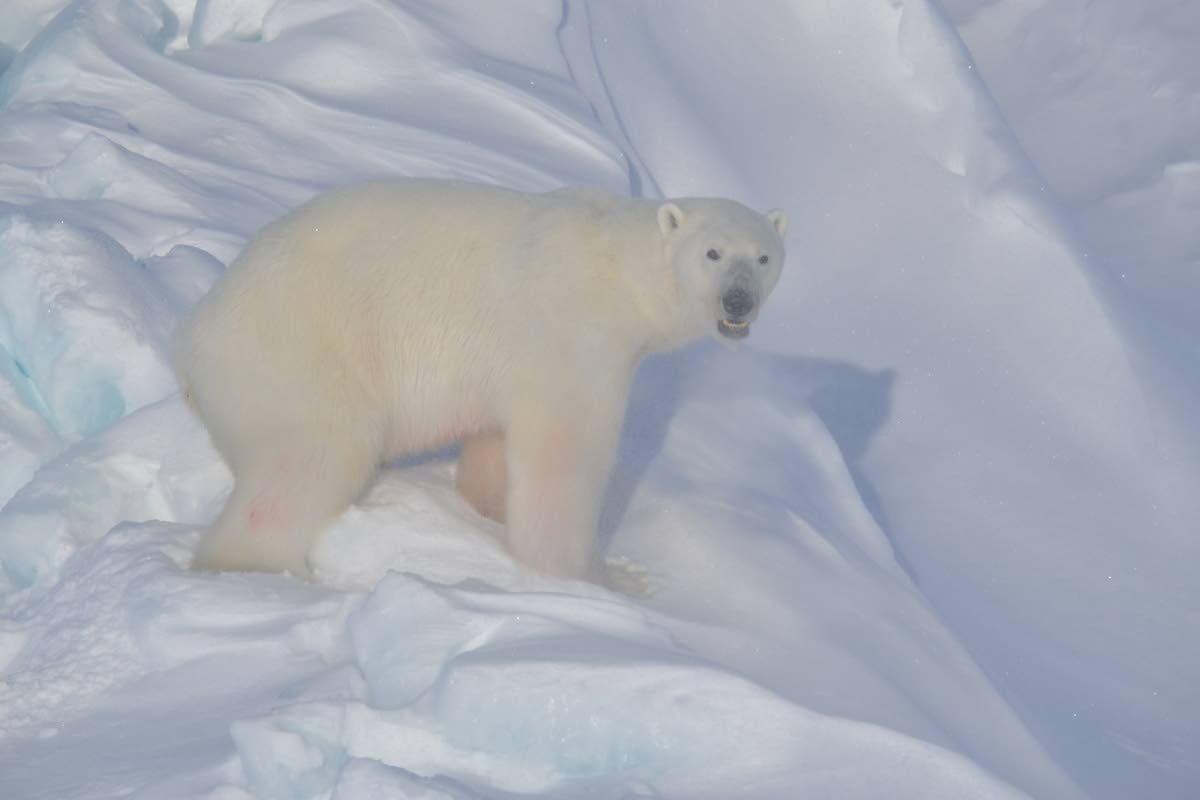 A male polar bear on the Chukchi Sea last spring.

An adult male polar bear on the Chukchi Sea walks toward a seal (upper left). A recent study indicates both wild and captive polar bears thrive on a high fat, low protein diet and can suffer poor health if protein intake is too high.

A polar bear at Columbus Zoo chooses lard over lean meat during a dietary experiment.

A male polar bear on the Chukchi Sea last spring.

A study on the nutritional needs of polar bears co-authored by a Washington State University scientist indicates the iconic animals require much lower protein levels than other meat eaters and their preference for a high-fat diet may make it difficult for them to adapt to a warming climate.

Researchers found captive polar bears are routinely fed lean meat diets more suited to lions and tigers, and, just like humans who overindulge on protein, are susceptible to kidney and liver disease. The zoo inhabitants also suffer from low reproduction rates and are susceptible to premature deaths.

The research team — led by Charlie Robbins, who has worked with grizzly bears at WSU for more than three decades, and Karyn Rode, a former graduate student at the school’s bear center who now works for the U.S. Geological Service out of Portland, Ore. — believe the same fate could befall wild polar bears if climate change reduces their access to prey. Their study looked at both captive and wild bears.

Polar bears hunt ringed and bearded seals on sea ice hanging over the continental shelf. When seals are abundant, the arctic ursids high-grade the blubber from their kills and leave some or much of the leaner muscle tissue uneaten. Their preference for high-fat diets, an evolutionary adaptation that has allowed them to thrive in an austere environment, sets them apart from other carnivores that feast on protein.

“We have made some assumptions about the nutritional requirements of polar bears because their diet is almost exclusively animals,” Robbins said. “But, unlike cats, they do not need and cannot tolerate high protein.”

Bears and other animals, including humans, that consume diets high in lean meat, make their livers and kidneys work overtime to process the protein and excrete nitrogen. People sometimes base diets on the overconsumption of protein as a weight-loss strategy because the body must burn energy to process it. But humans have a much wider food base from which to draw.

“Humans can consume high amounts of carbohydrates to avoid consuming too much protein, but polar bears don’t have access to plants,” Robbins said. “Instead, they have evolved to consume the highest fat diet of any species on the planet, which helps meet their caloric needs as they have become the largest bear species in the world, while ensuring that they do not consume protein at levels that exceed what they require.”

Rode studies bears on the Chukchi Sea in the Arctic Circle roughly between Alaska and Russia. In the article “Energetic and health effects of protein overconsumption constrain dietary adaptation in an apex predator,” published in the journal Scientific Reports, the team documented Chukchi Sea polar bears feast on pinniped blubber to the tune of 66% to 74% of their diets and that their overall diets consisted of two-thirds or more fat to one-third or less protein.

In short, polar bears have carved out a niche by eating other animals that also eat other animals. But the concentration on high-energy fat found in the blubber of marine mammals instead of protein allows the bears to meet their caloric and nutritional needs without stressing their livers or kidneys or burning excess energy. Tests on wild bears indicate they don’t show signs of poor kidney or liver health.

But dietary needs of polar bears is something researchers are just starting to untangle. Past studies, Rode said, have concentrated more on how often wild bears feed rather than their fat-to-protein intake.

“I think it really changes the way we look at polar bears. The mindset is they are carnivores and we think of them as a meat-eating species,” said Rode, who noted they evolved from brown bears that eat the fatty meat of salmon but also carb-rich berries. “They are truly an omnivore that just happen to eat animals, so they still have really low protein (requirements).”

Decades ago, zookeepers widely decided since polar bears are carnivores, unlike the omnivorous brown bears from which they evolved, that they should be fed the same diets of other captive carnivores, namely lions or tigers. Robbins said polar bears in zoos have largely been fed diets consisting of about two-thirds protein and one-third fat.

Robbins and Rode set up an experiment in which captive polar bears were presented trays of food from which they could select lard or their typical diet of lean meat. Lard won by a landslide. Robbins worked with Mazuri Exotic Animal Nutrition to develop a dry kibble that will better meet the nutritional needs of captive bears.

If climate change alters their access to sea ice and seals, wild polar bears will have to adapt. If they catch fewer seals, they won’t be able to afford high-grading blubber from their kills and instead will have to eat more protein. While on land in the summer months, they are likely to depend on sources such as caribou or the eggs of ground-nesting birds, neither of which can come close to providing the calories or nutritional balance they need.

“Thus, their evolutionary divergence from brown bears and the associated physiological constraints on protein intake are likely an additional factor limiting the adaptation of polar bears to sea ice loss,” the researchers write in the Scientific Reports article.