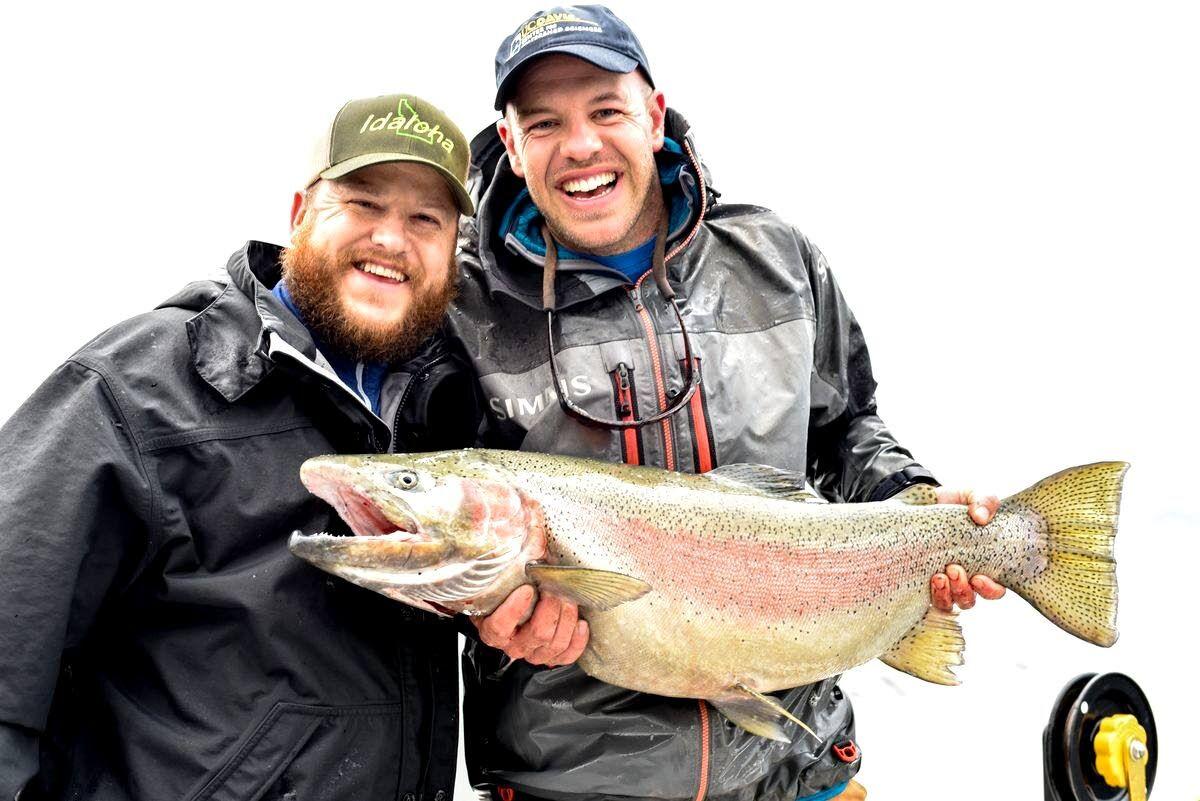 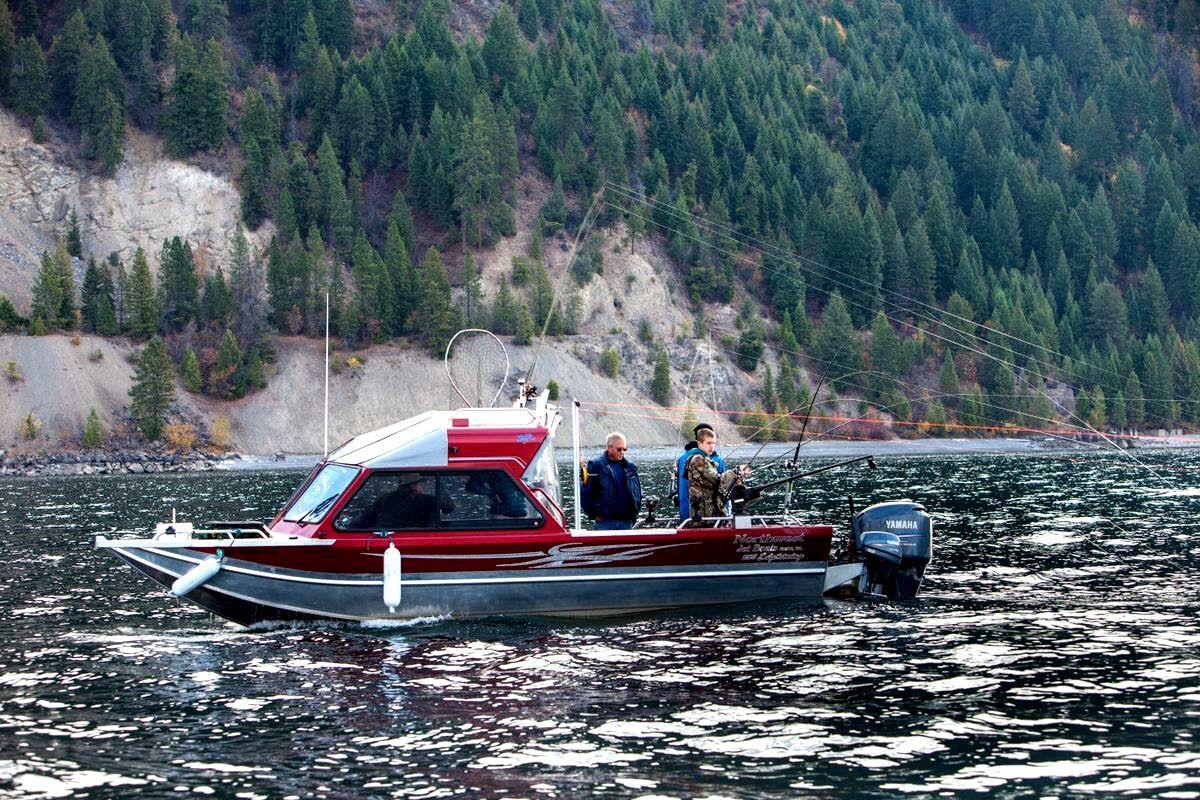 Anglers on a boat piloted by Ryan Roslak of Athol, Idaho, troll 10 lines in pursuit of trophy rainbow trout in Lake Pend Oreille. 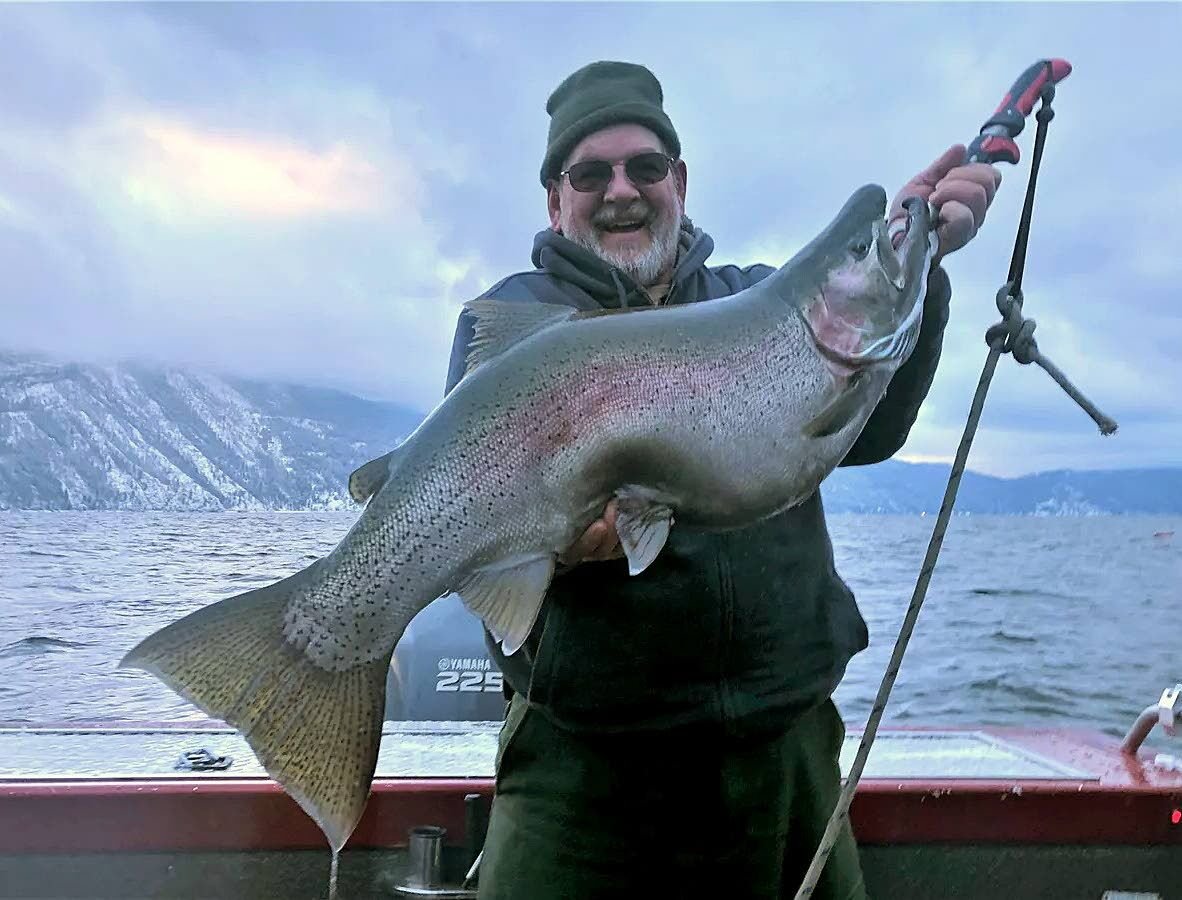 Dave Gillespie caught this rainbow trout, which was just less than 25 pounds, while winter fishing with Ryan Roslak on Lake Pend Oreille.

Anglers on a boat piloted by Ryan Roslak of Athol, Idaho, troll 10 lines in pursuit of trophy rainbow trout in Lake Pend Oreille.

Dave Gillespie caught this rainbow trout, which was just less than 25 pounds, while winter fishing with Ryan Roslak on Lake Pend Oreille.

The fish that made Idaho’s largest lake famous are getting back to trophy form.

For 15 years, the Idaho Fish and Game Department has been aggressively reducing the number of invasive lake trout in Lake Pend Oreille to help bring back the popular kokanee fishery. Fishing for kokanee was closed in 2000 until they were declared recovered in 2013, when fishing for the “silvers” reopened to the delight of anglers who love their red meat.

Meanwhile, the thriving kokanee fishery has been a feast that’s fueled impressive growth in rainbows and bull trout.

“When kokanee densities are high, their average size is smaller,” said Andy Dux, Panhandle Region fisheries manager, noting that fish in the 8- to 10-inch range, while still good for smoking, aren’t as appealing to anglers and are harder to catch. “The flip side is that rainbows and other predators do very well when prey of that size is abundant.

“It takes six to 10 years for a rainbow to reach 20-plus pounds. The rainbows out there now have lived their entire lives with abundant kokanee. That’s why the trophy fishery has moved to the next level.”

In November, Jenny Howerton won the annual fall derby, sponsored by the Lake Pend Oreille Idaho Club with a 25.2-pound rainbow. The top rainbow in the Halloween Derby weighed 25.6 pounds.

In January, a state catch-and-release record for bull trout was set again, this time by Matthew Lutzke, who was fishing with Pend Oreille Charters. It measured an impressive 39 inches long. The scale on the boat registered 31 pounds before the fish was released, as required for bull trout.

“More 25-plus-pound fish were caught in 2020 than in any year since the early 1990s,” said Dux. “Rainbow anglers have been thoroughly enjoying the fishery, but I don’t think enough folks realize how incredible it is right now. Without exaggeration, I’m not sure you can find a better trophy rainbow fishery on the planet.”

An accident more than 100 years ago set the stage for Lake Pend Oreille’s legendary fishing status. In 1916, Montana imported chinook salmon eggs from a Whatcom (Wash.) County hatchery to raise and stock in Flathead Lake. Somehow, sockeye eggs were mixed in and the combination was released, according to a 2012 interview with Jim Vashrow, Montana’s former regional fisheries manager in Kalispell.

The result was landlocked sockeye salmon, which are known as kokanee.

Fisheries biologists say a 1933 flood likely flushed kokanee down the Flathead River to the Clark Fork and into Lake Pend Oreille in large enough numbers to start a fishery that became wildly popular by the late 1930s.

Kokanee provided a forage base that fattened native bull trout and paved the way for the introduction of Gerrard rainbow trout into Lake Pend Oreille in 1941.

“Gerrards get big because they are piscivorous (fish-eating) and grow longer because they become sexually mature a little later than other rainbows, typically at 6-8 years of age,” Dux said.

After Canada had initial success with introducing mysis shrimp in Kootenay Lake to boost kokanee and grow even larger rainbows, fishermen encouraged Idaho Fish and Game to follow suit in Lake Pend Oreille in the 1960s. A disaster gradually ensued.

Within a few years, biologists in Canada and Idaho realized the mysis shrimp would out compete the kokanee for daphnia, tiny plankton that are critical to kokanee diet. Compounding the problem, the shrimp were a boon to invasive and predatory lake trout, also known as mackinaw, that would find their way into Lake Pend Oreille from Montana.

By the 1990s, it was clear that lake-level fluctuations behind Albeni Falls Dam, completed in 1955, and the introduction of mysis shrimp were the source of the kokanee decline. But in such a large lake, fish managers had few recourses.

Intensive research was involved in setting the actions that led to the lake’s kokanee recovery. Meanwhile, the research and fisheries programs continue to contend with old issues and recent ones, such as walleye, the newest invasive predator to show up in the lake.

Avista, through its Clark Fork Dam relicensing program, as well as the Bonneville Power Administration which manages Albeni Falls Dam, are the main funding sources for the lake’s fisheries programs.

Researchers have a spectrum of projects and studies underway on the lake, including tagging and radio tracking walleye and rainbows, gillnetting and fishing programs to suppress lake trout, kokanee spawning projects and surveys to monitor kokanee and their food supply.

“Since we started suppressing lake trout in 2006 the population has been reduced by more than 90 percent,” Dux said.

While invasive predators, including lake trout, northern pike and walleye, are threats to kokanee and trophy rainbows, each of the fisheries has advocates.

“Everybody has their favorite fish,” said fisherman Ryan Roslak of Athol, Idaho. “I’m from the Midwest and I love to eat walleye. But walleye, pike and lake trout are very disruptive in the Lake Pend Oreille ecosystem.”

Some people don’t care about all the years and money devoted to establishing and maintaining the lake’s kokanee, native bull trout and trophy Gerrard rainbow fishery, he said. Heated discussions over priorities have long been common at Lake Pend Oreille fisheries management meetings.

“The bottom line is this,” Roslak said. “You can fish for walleye and pike a lot of places. How many places in the world can you go and catch a 25-pound rainbow? Most people would have to travel, but we have them in our backyard.”

Members of the Lake Pend Oreille Idaho Club founded the 25-Pound Club in 1976. You can’t buy your way into it. You have to catch a rainbow that weighs 25 pounds or more to get a coveted patch that commemorates the moment.

In the early 1990s, more than 20 patches a year were being awarded to anglers. By the mid-1990s the kokanee crash was happening and virtually no patches were earned as the food source for the trophy rainbows diminished.

The first 25-pounder in a dozen years was caught in 2013 as the kokanee recovery picked up. In 2020, six patches were earned, including one rainbow over 27 pounds.