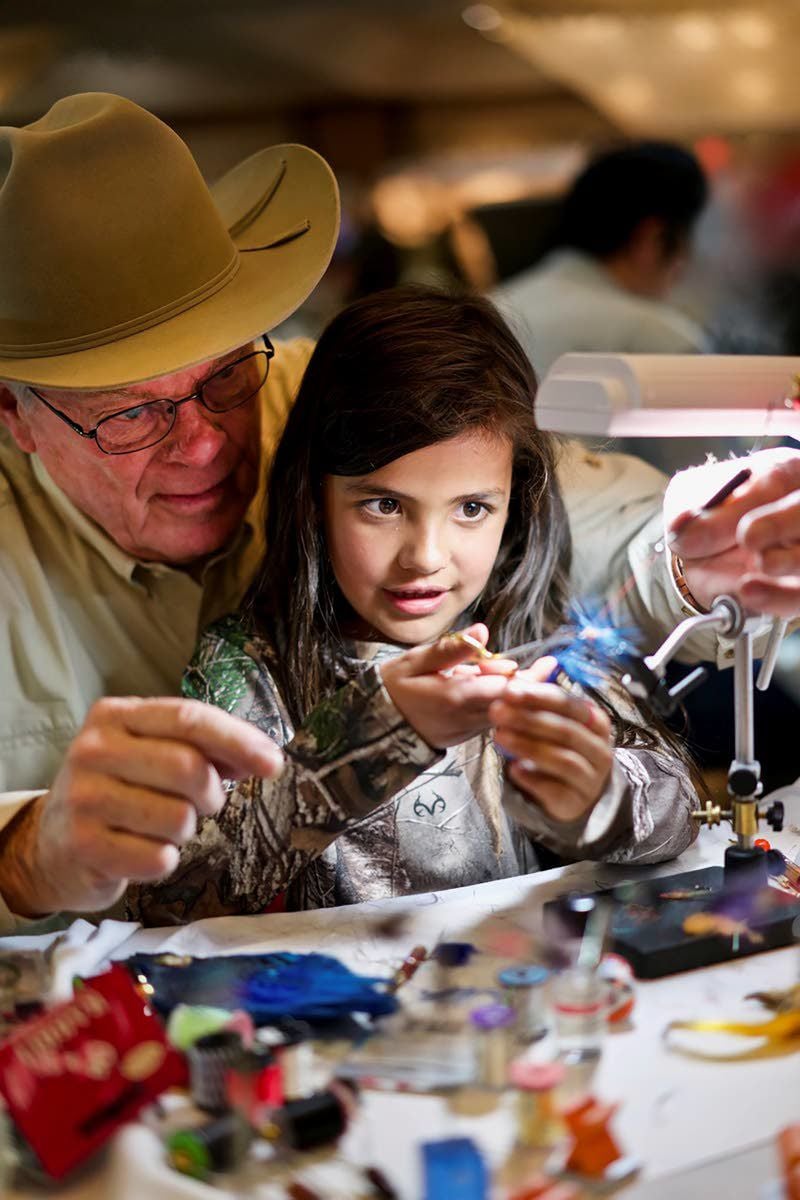 Will Godfrey of Lewiston helps a girl tie a fly at the Eastern Idaho Fly Tying Expo in Idaho Falls. 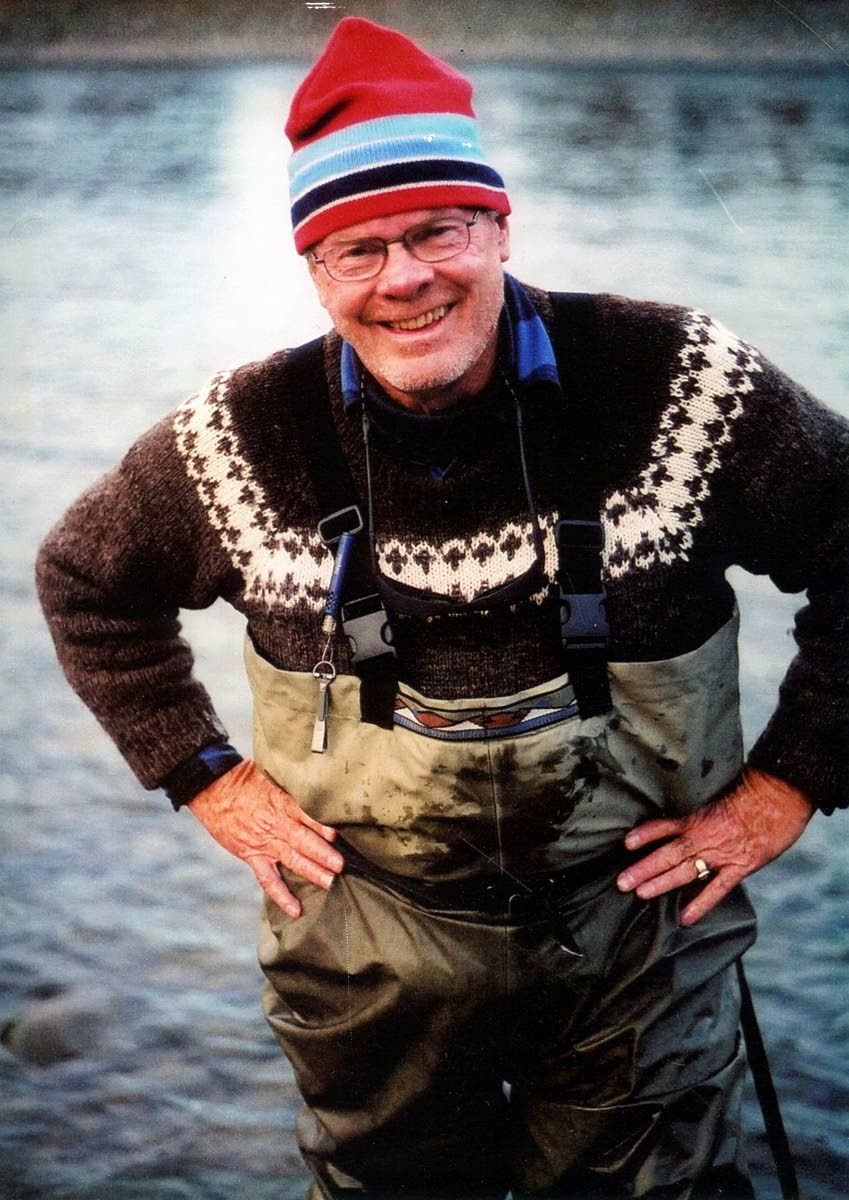 Will Godfrey was recently given the Order of the Lapis Lazuli Award by Fly Fishers International.

Will Godfrey of Lewiston helps a girl tie a fly at the Eastern Idaho Fly Tying Expo in Idaho Falls.

Will Godfrey was recently given the Order of the Lapis Lazuli Award by Fly Fishers International.

From the time his father taught him to cast a fly on Utah’s upper Parley’s Creek to his present retirement years fishing for big steelhead on the Clearwater River, Will Godfrey has been consumed with fly fishing.

He built a career around the activity and became a tireless advocate of the sport through fly fishing organizations and a dedicated educator devoted to teaching children how to fly fish. Above all, he became a believer and disciple of its ability to change lives.

Soon the 80-year-old Godfrey will don a gaudy ring signifying him as one of fly fishing’s luminaries. Earlier this month he was given the Order of the Lapis Lazuli Award by Fly Fisheries International at a ceremony in Boise.

“It’s the highest award given in the world of fly fishing,” he said. “It’s not about catching fish or anything like that. It’s about a body of work that encompasses everything from education, conservation and administration.”

While he loved to fish as a boy, whether by drifting a fly or dunking a worm, Godfrey said his complete devotion to fly fishing began while he was a student at Colorado State University in 1956. Following a church mission to New York, he attended Brigham Young University, where he tried to balance academics and fishing.

“I probably took an extra year in college because I fished so much,” he said.

Godfrey perfected his fly tying while earning a master’s degree in Agricultural Economics at University of Arizona. From there, he went on to earn a doctorate at Montana State University. As a Bobcat, he was lured more and more by the pull of trout-filled rivers and fly fishing.

“I was hired just to make a little extra money by a fellow named Bud Lilly out of West Yellowstone Montana to be a store man and a guide,” he said. “It was at that time I realized that probably I had taken the wrong path academically, because I was in economics and yet I had this huge desire to build a fly fishing outfitting business.”

He did just that with his partner George Wright. They opened Will Godfrey’s Fly Fishing Center at Last Chance, Idaho, on the Henry’s Fork of the Snake River in 1969. While working in academics during the school year at places like Central Washington University and Boise State University, Godfrey and his partner continued to grow the business.

“It was lucrative and fun, and we expanded our operations in Idaho. We were in Montana, New Zealand, the Arctic, British Columbia, (Canada). Jeez we were all over the place.”

In 1975, Godfrey was appointed to the Idaho Fish and Game Commission by Gov. Cecil Andrus and also served on the Pacific Marine Fisheries Commission. In 1979, he took what was supposed to be a sabbatical from Boise State University but never returned to teaching. Instead, he started a marketing and sales business, Sunrider International, and traveled all over the globe while also running the outfitting business.

He and Wright sold the fly fishing business in 1986. Next, Godfrey started a cattle ranch in Idaho’s Bear Lake County. In 2002, he moved to Lewiston when his wife took a job with the Idaho Department of Juvenile Corrections.

His fly fishing body of work includes not only his time as an outfitter and fish and game commissioner but also stints as a volunteer senior administrator for Fly Fishing International. He helped establish local fly fishing clubs in the Treasure Valley, Magic Valley and eastern Idaho.

He became a fly casting competitor and was crowned Fly Fishing International Champion in 1971 and 1973. Over the years, he has served as an auctioneer for several fly fishing clubs at their annual banquets. Along the way he authored two books — “Fly Fishing in Idaho” and “Seasons of the Steelhead.”

In Lewiston, he became president of the Kelly Creek Flycasters, where he helped start the group’s North Idaho Fly Fishing Expo. He also spearheaded an effort to teach fly fishing and fly tying to residents at the Idaho Juvenile Corrections Center in Lewiston with the idea that it would offer them a constructive pastime that might help keep them out of trouble when they are released from custody. That program is now more than a decade old.

Now he is able to count himself among the giants of the sport. The FFI award was established in 1965 and has been bestowed on just 31 other fly anglers.

“To be put in this group of people, there is really some heavyweights here, like Lee Wulff — everybody in the fly fishing world knows him — and Lefty Kreh was another recipient, and a lot of other guys that have won the award are outstanding in the organization.”

As far as the accompanying bling that is still being made, Godfrey said it won’t be quite as big as a Superbowl Ring but “it’s big.” Each one is individualized but features a gold band with a hunk of lapis lazuli, a blue metamorphic rock, with “FFI” embedded in it and the year of the award on the sides.

He said he’s not really a jewelry kind of guy. He wears only a wedding band on his left hand. So don’t expect to see it on his right ring finger while he’s waist-deep making a long cast to a promising steelhead run in the Clearwater River. But he said he may choose to flash it on special occasions, such as when he’s running auctions at fly fishing banquets.