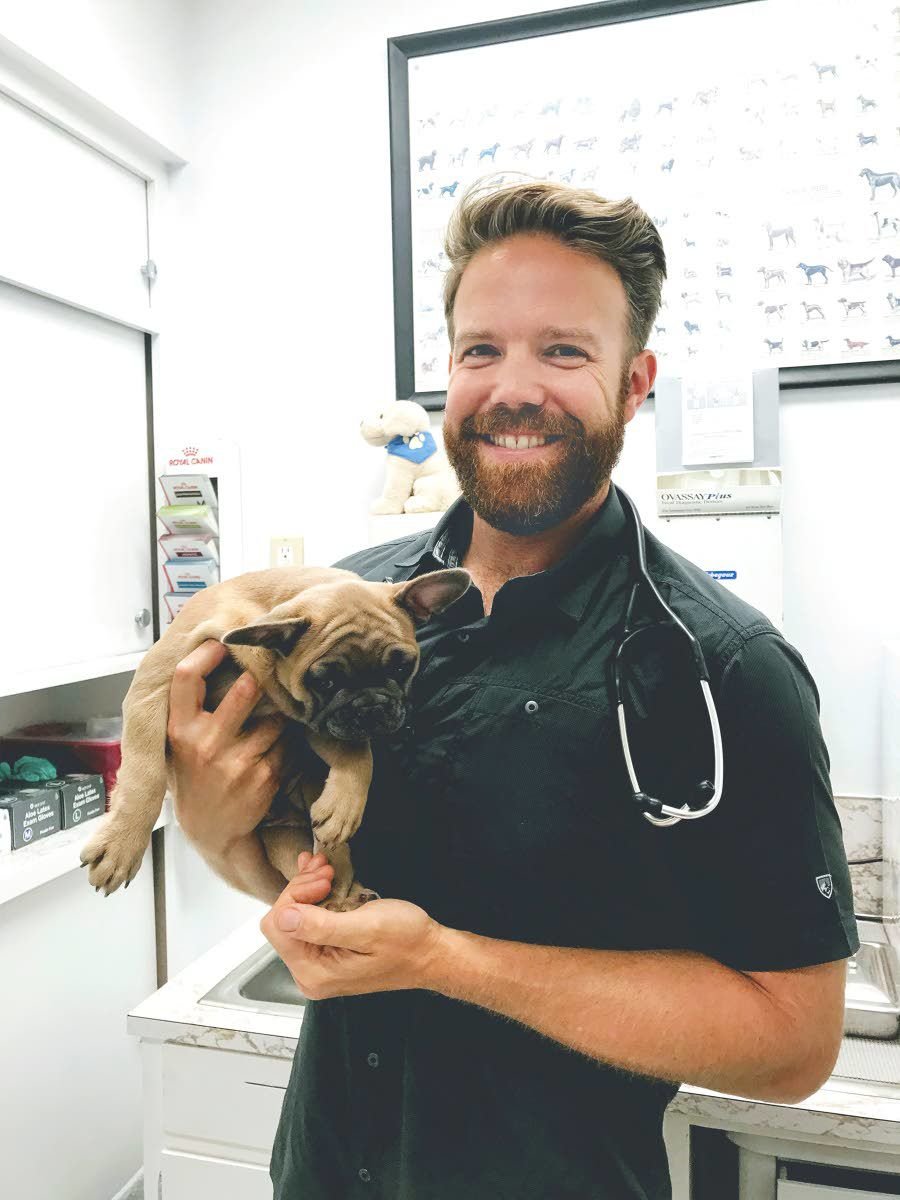 Seth Bynum, a veterinarian at the Lewiston Veterinary Clinic, holds a client’s dog. Bynum is also a hunter who trains and cares for a number of bird-dogs. 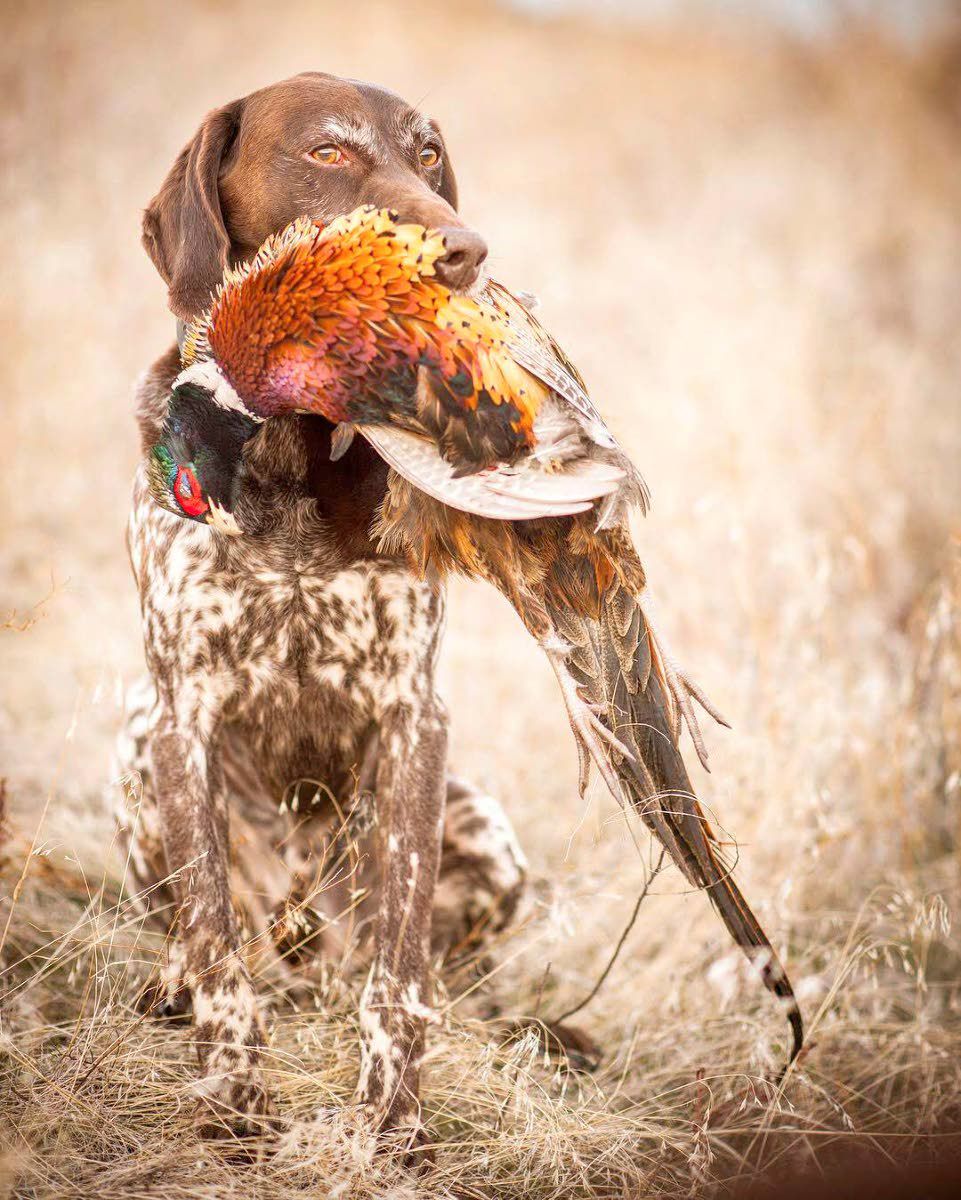 River holds a pheasant after a retreive. 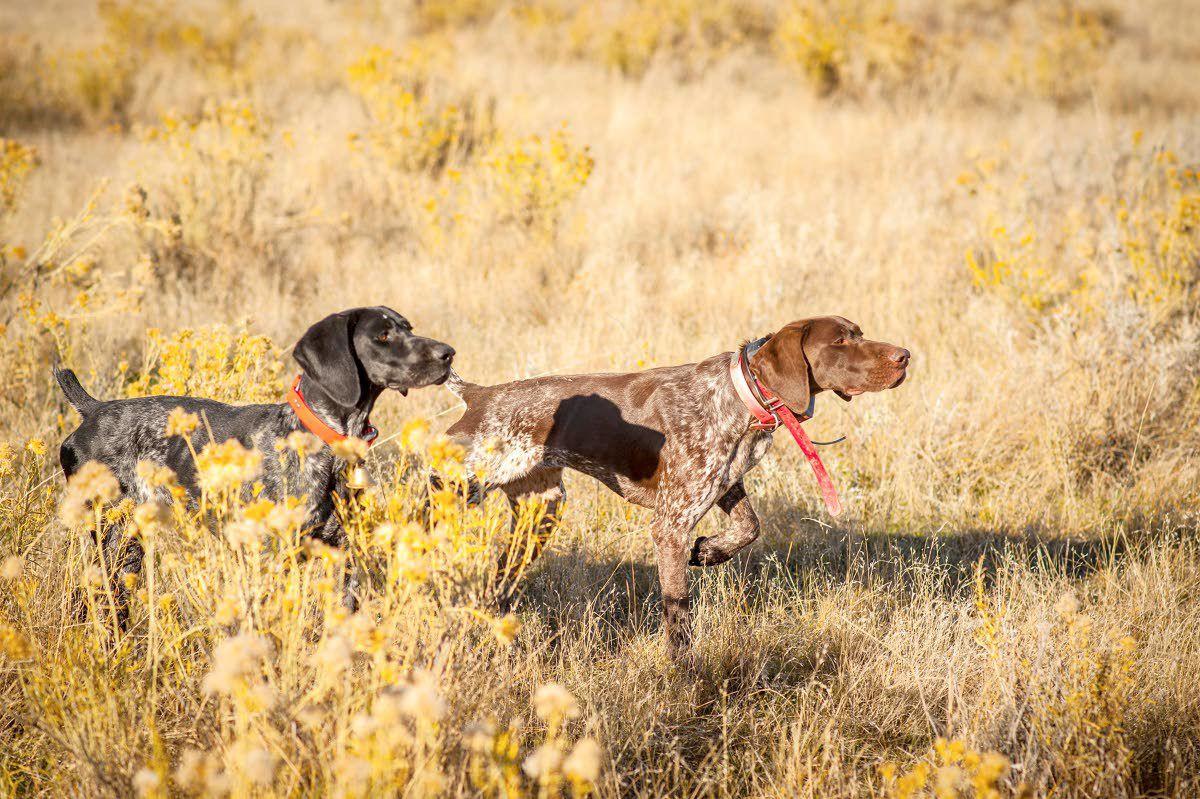 Pearle (left) and Shine on point during a hunt in Montana. 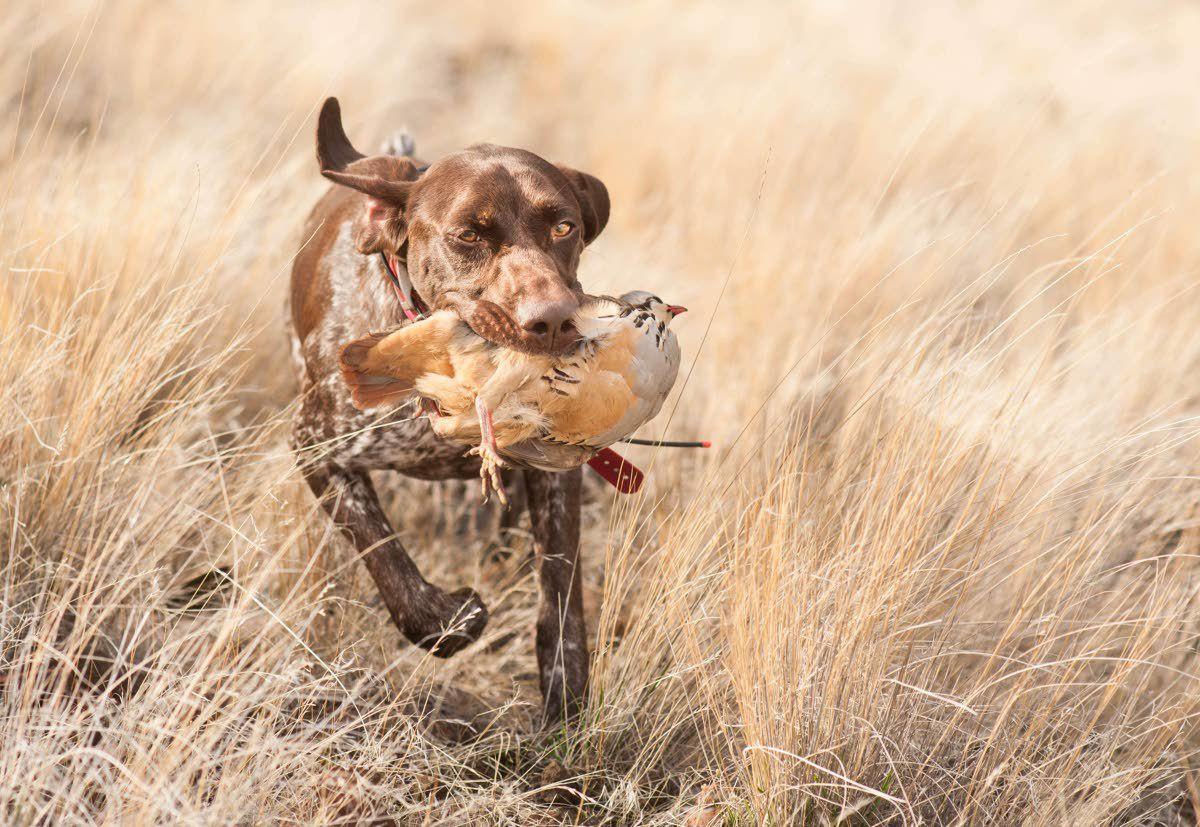 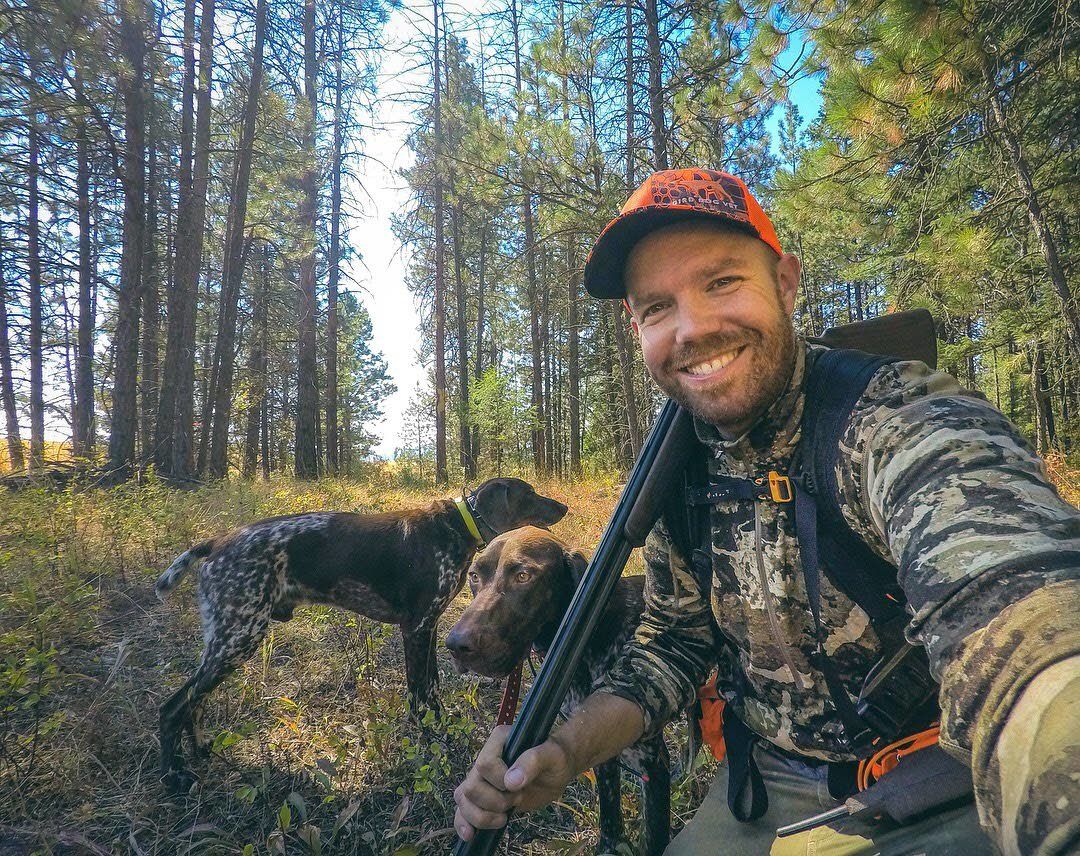 Seth Bynum of Moscow takes a selfie with his dogs Shine (front) and River.

Seth Bynum, a veterinarian at the Lewiston Veterinary Clinic, holds a client’s dog. Bynum is also a hunter who trains and cares for a number of bird-dogs.

River holds a pheasant after a retreive.

Pearle (left) and Shine on point during a hunt in Montana.

Seth Bynum of Moscow takes a selfie with his dogs Shine (front) and River.

Wth chukar, Hun and quail seasons opening Saturday in Idaho, and just a few weeks away in Washington, it’s a bit late to get your dog in shape for hunting season.

But keeping your pups active throughout the year is a good way to ensure they will be ready when seasons open and avoid the need to work off a few pounds put on during the summer. Upland game bird hunter and veterinarian Seth Bynum said he likes to keep his German shorthairs, Shine and River, active year-round, through walks and swims during the offseason and in the field during the fall and winter.

“Some of that is just for convenience’s sake, because they are better citizens in the house when they are tired,” he said of the active breed.

“It’s a year-round process for most people, but the summertime definitely is about making sure they don’t get overweight and then just keeping them in good enough shape so they are not trying to make up for six months of offseason in the first day you go out,” he said. “That is a good recipe for injury and exhaustion and all the other things that go along with overdoing it, like we would probably do to ourselves.”

Early in the season when air temperatures are prone to still reach the 90s, Bynum likes to keep his hunts short if he goes out at all. He restricts his outings to early morning or late evening hours, when temperatures are more temperate and there is more likely to be dew or moisture that holds scent.

“I might make one- or two-hour hunts the first day,” he said. “I don’t think the dogs hunt particularly well when it’s dry and arid. I just like to build up to it for later on.”

Heat exhaustion and heatstroke are dangerous conditions. In addition to limiting early-season hunts to cool morning and evening hours, Bynum recommends carrying plenty of water for your dogs. He likes to plan hunts in places where dogs can take a swim or get a drink from a creek, river or pond at the midway point.

“Bring all the water you think you will need, and bring some more,” he said.

Also pay attention to your dog. Hunting dogs will likely pant any time they are working hard. If they should be panting but aren’t, it’s time to act. Likewise, if they become lethargic or can’t move, immediate intervention is needed.

To avoid that degree of exhaustion, he said it’s a good idea to go slow, take lots of breaks and to call it a day if your dog tries to seek shade or rest during a hunt.

The first half of the upland bird season also brings the danger of running into rattlesnakes. Bynum is a believer in the rattlesnake vaccination, although he doesn’t use it on his dogs. They have proven themselves to be naturally leery of snakes, and he does his best to stay out of snake-prone areas.

Testing the efficacy of the vaccine is difficult. Instead of making a dog immune to snake bites, the vaccine is designed to make any bite less severe. Bynum said it’s a difficult thing to prove during a scientific trial, because all dogs react differently to snake bites and not every bite is of the same intensity when it comes to venenation.

That being said, he views the vaccine as something that will give your dog a better chance at recovering from a bite.

“I think, in general, a dog that is vaccinated is going to be less likely to have a life-threatening reaction,” he said. “It doesn’t mean it won’t happen. I think you are still going to have to go to the vet.”

He also said the vaccination is pretty inexpensive. Most are $25 to $50, far cheaper than treating a dog with anti-venom that can run more than $300 per vial.

“It doesn’t add a lot to your bill,” he said. “And I think it’s a good insurance policy.”

He said hunters who are gung-ho about hunting hard earlier in the season or visiting places where snakes are more common should think seriously about the vaccine.

“If you are putting yourself in high-risk situations, I would definitely go with it,” he said. “You still have to use your head. Don’t tempt fate; don’t go into thick brushy areas in the heat of the day.”

If a dog does get bit, whether vaccinated or not, a trip the vet is required. If you are far from veterinary service, Bynum said giving the dog Benadryl is a good interim measure.

“If you can get some Benadryl, pretty much in any quantity, into your dog without them vomiting it back up, that will help a lot.”

Porcupines are another danger faced by hunting dogs. Many, but not all, dogs try to tangle with the rodents armed with needlelike quills. When they do, they often end up with a face and/or mouth full of quills. He recommends carrying pliers or a multitool such as a Leatherman to extract quills. Again, a trip to the vet may be necessary depending on the severity of the encounter.

He said many people advise cutting the quills with scissors, which is supposed to make them easier to extract.

“I have never found that to be advantageous,” he said.

Just grab the quills and pluck them out, if possible. If a dog gets quills in the mouth, remember to check under the tongue and in the back of the throat.

“That is a spot where we find them all the time that people have missed,” he said.

It’s easy to miss a quill or two, and dogs that get hit by porcupines often require a return visit to the vet to extract hidden quills that begin to fester some days or weeks later.

He caries a slip lead that can be used as a makeshift muzzle to avoid getting bit by the dog during the painful process of pulling quills.

Bynum also carries a bottle of contact lens solution with him while hunting. The saline solution in a squeeze bottle is useful for cleaning wounds or flushing seeds and other foreign objects out of an eye. A skin stapler can help close a wound and keep it clean. However, Bynum said more serious lacerations, even if cleaned and closed with a stapler, should still be checked out by a vet.

Anti-inflammatories like Rimadyl or carprofen are good to have on hand, especially for older dogs, to quell the aches and pains that come with hard, athletic work. Bandaging material like vet-wrap can be helpful as well, though Bynum warns he has seen many cases of complications that arise from bandages being applied too tightly.

As his social media handle implies, Seth Bynum is a veterinarian. But in his off time, Bynum shares his hunting adventures — mostly upland bird trips with his German shorthair pointers, Shine and River, on Instagram and YouTube.

He grew up in North Carolina, where he fished as a child and later taught himself to fly fish as a teenager. He calls himself an “adult-onset hunter,” meaning he didn’t grow up chasing game. Bynum was introduced to hunting by his then future father-in-law and was drawn to it by the occasional off-topic upland bird hunting column by fly fishing author John Gierach.

“I could see myself doing that,” he said of his thoughts after reading Gierach’s hunting missives.

“The first bird I shot was sharptail grouse,” he said. “I just kind of got hooked on it. I was in my early 20s.”

He went to vet school after a short career as a reporter and photographer at weekly newspapers in Montana and the Puget Sound area. Bynum said documenting his hunts gives him a creative outlet that isn’t always available in his more scientific profession.

“It’s kind of nice not having to do it for work anymore,” he said. “I get to write a little bit, a paragraph instead of a full story.”

He frequently posts pictures and short videos of his hunts, where his bird dogs are definitely the stars. He does it so he can both remember his hunts and share them with others who relish chasing wild birds in amazing settings.

“It all started out as a way to document it for myself, to remember it,” he said. “I go into it thinking, I want to create a really beautiful memory of what I am seeing, because that landscape is just unparalleled out there.”

Like with many people who hunt with bird dogs, watching the amazing animals do their thing takes precedence over shooting birds.

“After a while you just like seeing the dogs do good stuff, and it’s less about ‘I got to get my six or my eight birds,’ ” he said.

Bynum and his wife live at Moscow and have young children. He works at Lewiston Veterinary Clinic.

At left, he shares some tips for keeping hunting dogs healthy and active, both in the offseason and while in the field, where they can face hazards such are barbed wire fences, rattlesnakes, porcupines and excessive heat.

You can find Bynum’s work online at Instagram: @birddogvet and at http://bit.ly/2kJSduP