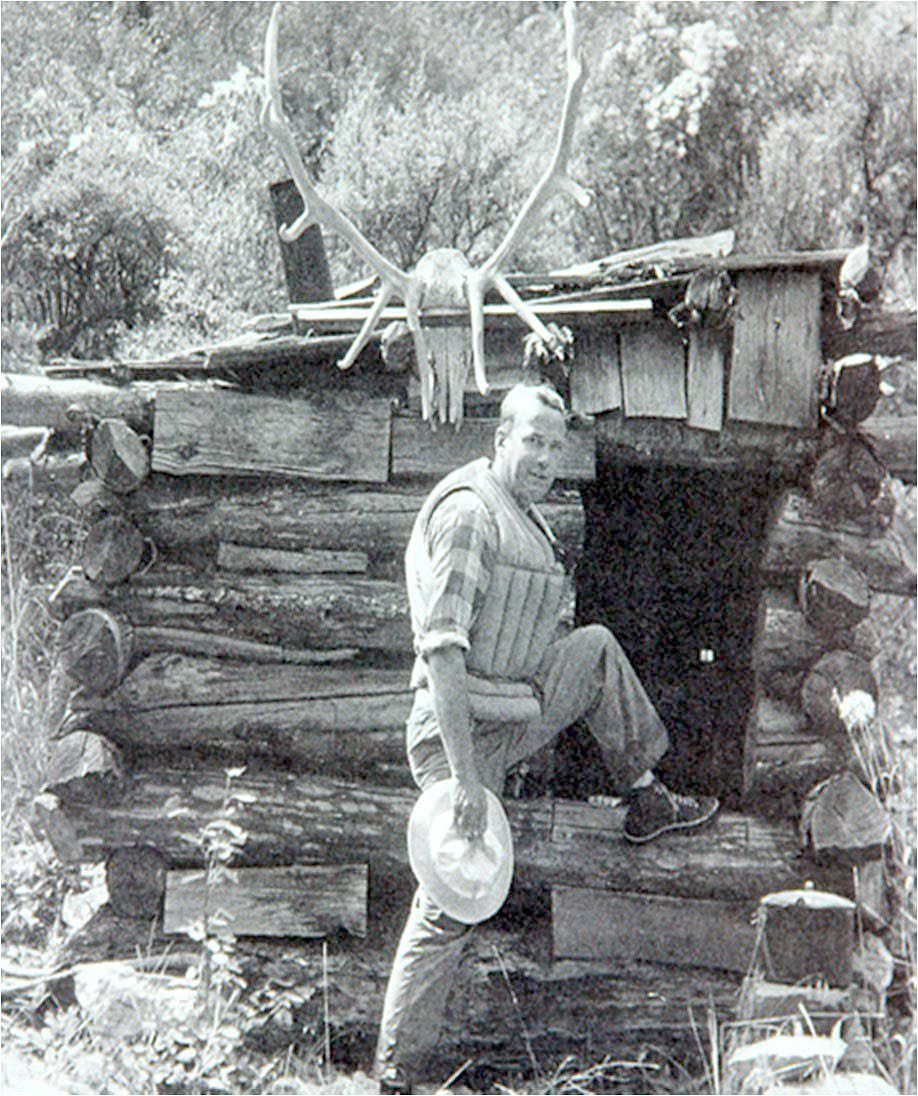 A member of the Hatch-Swain-Frazier Expedition stands in front of Parrott’s Lower Cabin on the Middle Fork Salmon River in 1936. 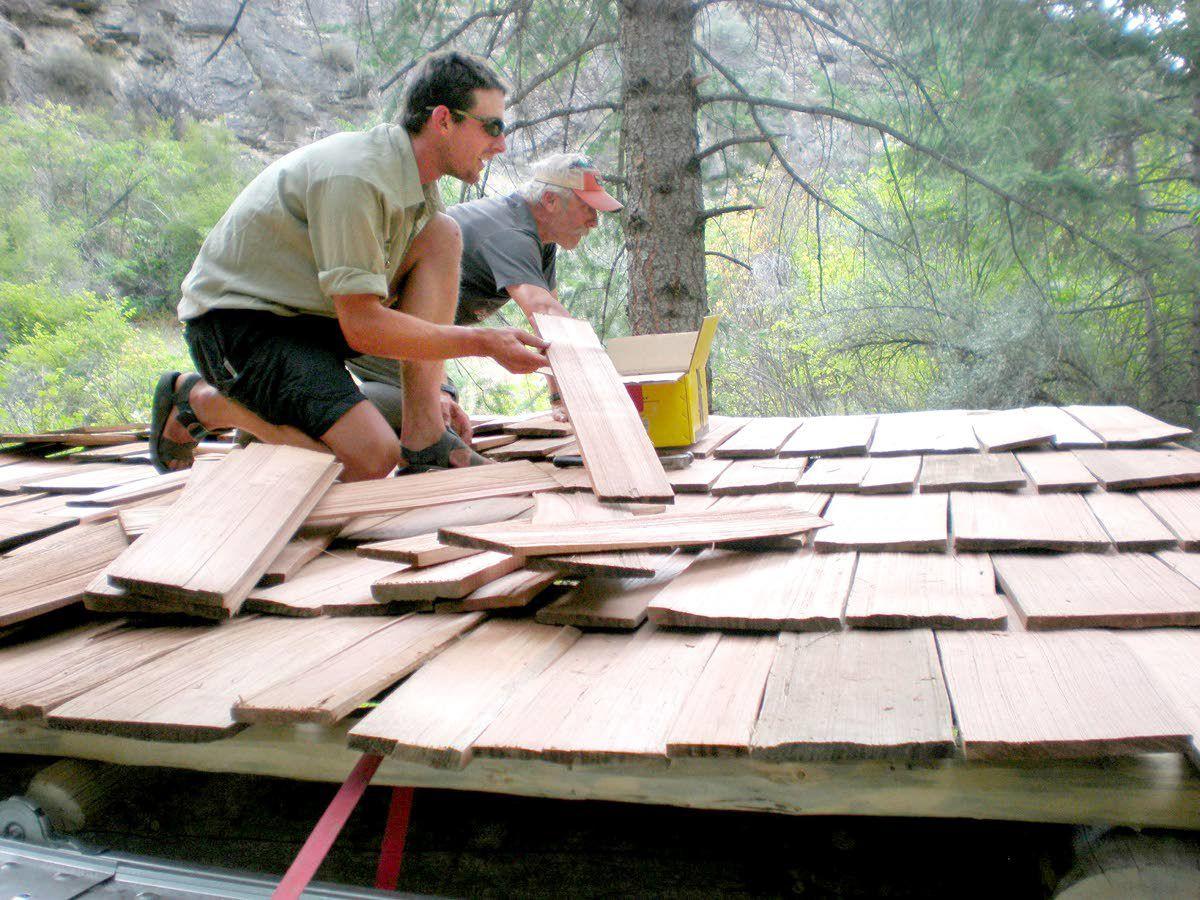 New shakes are installed on the Earl King Parrott lower cabin during a recent project to refurbish the cabin.

A member of the Hatch-Swain-Frazier Expedition stands in front of Parrott’s Lower Cabin on the Middle Fork Salmon River in 1936.

New shakes are installed on the Earl King Parrott lower cabin during a recent project to refurbish the cabin.

Two weeks ago a popular hermit’s cabin deep in the wilderness along the Middle Fork of the Salmon River got a major makeover.

The tiny cabin, built by Earl King Parrott about 100 years ago, was falling apart and needed some TLC. The Salmon-Challis National Forest called on the expertise of Joe Gallagher, a professional historic site restorer, now retired, archaeologist Camille Sayer and a few river guides to help with the work.

The lower Parrott cabin sits at the confluence of Nugget Creek and the Middle Fork Salmon River within the Frank Church-River of No Return Wilderness. The site is a regular stop off by river rafters floating the Middle Fork, where guides recount the story of “The Hermit of Impassable Canyon.”

Parrott spent 30 years living a solitary existence in the Middle Fork country panning for gold, hunting, trapping and growing his own fruits and vegetables. He died in 1944 and is buried in the Salmon cemetery.

“He would go down to the river and try to pan for gold — that flour gold,” Gallagher said. “It’s back-breaking work. When he would gather maybe $50 or $60 worth he would go up to the town of Shoup and buy whatever he needed there, which might be salt, tobacco or bullets or whatever a hermit needs.”

Johnny Carey and Cort Conley, in their historical book entitled “The Middle Fork and the Sheepeater War,” describe Parrott as “intelligent and industrious,” but also “stubborn, aloof and lacking in humor.”

Parrott’s main residence was about 1,000 feet up the side of the steep canyon, but was difficult to get to. He had a series of ladders and ropes to climb the canyon. The main cabin burned down during a forest fire in the late 1980s, according to the U.S. Forest Service. The lower cabin near the river is all that is left tied to the wilderness hermit.

“The Central Idaho Wilderness Act of 1980 specifically requires identification and management of cultural resources including historic cabins in wilderness,” said Amy Baumer, public affairs officer for the Salmon-Challis National Forest. “The cabin was identified in the Historic Preservation Plan for the wilderness as a good candidate for preservation.”

Baumer said because the cabin is in the wilderness, nonmechanized traditional tools such as handsaws, axes, hammers and chisels were used to refurbish the cabin.

Getting to the site was an adventure. First, Gallagher and Sayer flew to a backcountry airstrip, then floated down the Middle Fork with three others for a day before arriving at the site. A previous Forest Service rafting crew delivered replacement logs and 30-inch shakes to rebuild the cabin roof.

Next, Gallagher and Sayer used intuition and research to put things back together.

“What we had were a few (historic) photos of this building from just after Earl passed away,” Gallagher said. “We didn’t have a good picture of the roof but we did have pretty good pictures of two of the walls. We used those to guide us.”

The crew took the cabin apart (labeling pieces to put it back together precisely), rebuilt the foundation with river rock and put it back together. Badly deteriorated logs were replaced. Wood was treated with products to help preserve it and prevent rot and mold. The cabin floor was simple dirt.

“We did a few things to bulletproof the building,” Gallagher said. “Will it last another 20 years? Yeah.”

Gallagher, 71, was originally hired decades ago by the Forest Service as an archaeologist and was told he also had responsibility for historic as well as prehistoric stuff.

“I was able to work with somebody in an apprentice capacity for five or six years,” he said. “When I started, I didn’t know which end of the hammer to hold and when I was done I went out on my own.”

He retired from the Forest Service and worked as a general contractor with his company Heritage Preservation Resources Inc., refurbishing historic sites for about 10 years.

“I’ve probably done hundreds and hundreds of buildings,” he said, “everything from taking them apart and putting them back together again to just assessing their condition, things from small cabins to whole forts.”

Gallagher said his business now does the work on a volunteer basis because at his age “I no longer need to chase after money.”

Forest Service archaeologist Tim Canaday said “without a willing cadre of volunteers, preservation projects such as this are nearly impossible to accomplish.”

The Forest Service plans to create an interpretive brochure describing the history of the cabin and the preservation activities surrounding it for wilderness visitors.