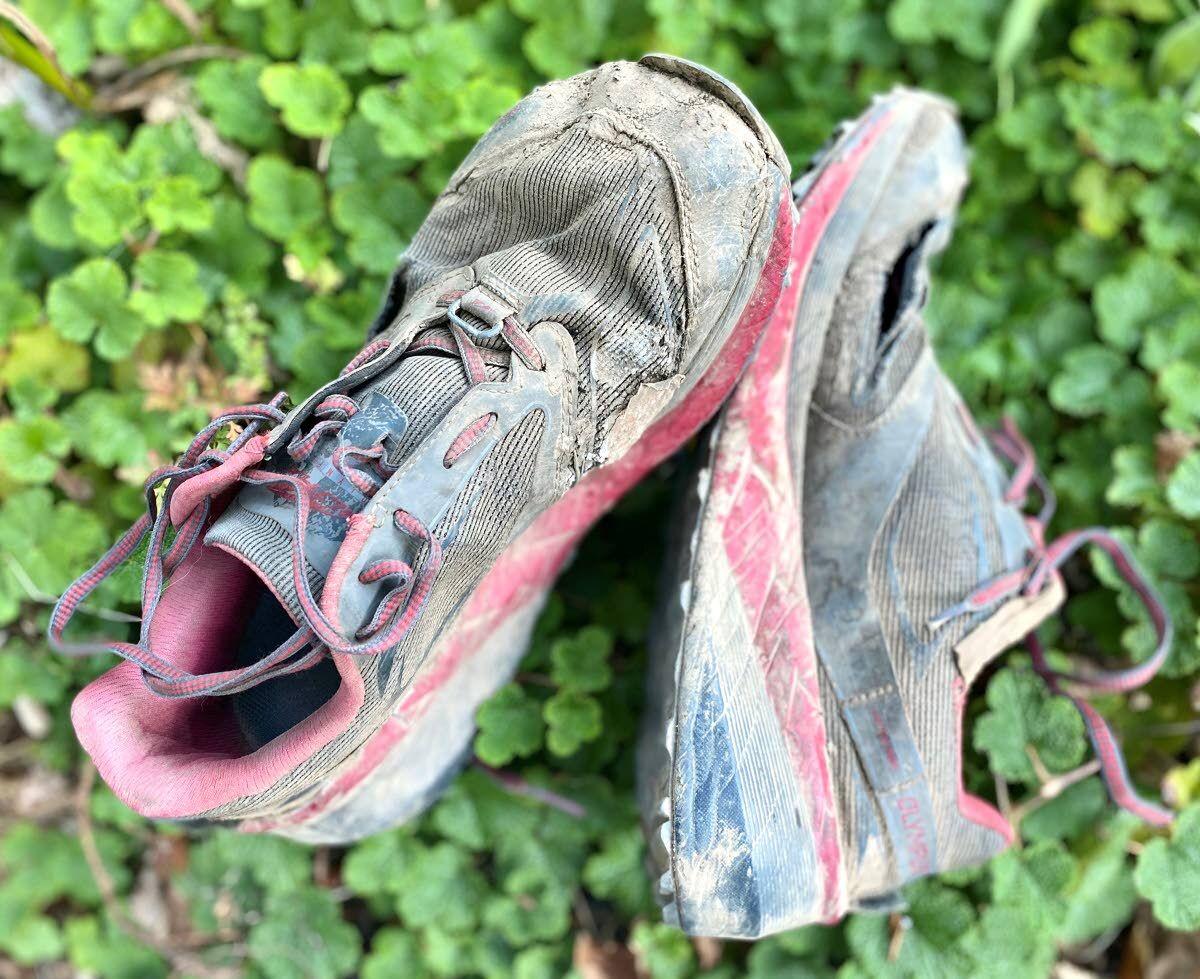 When Becky Rogers’ shoes began to fall apart on the trail, she didn’t have the option to stop to replace them. Instead, she doctored them trailside using super glue. 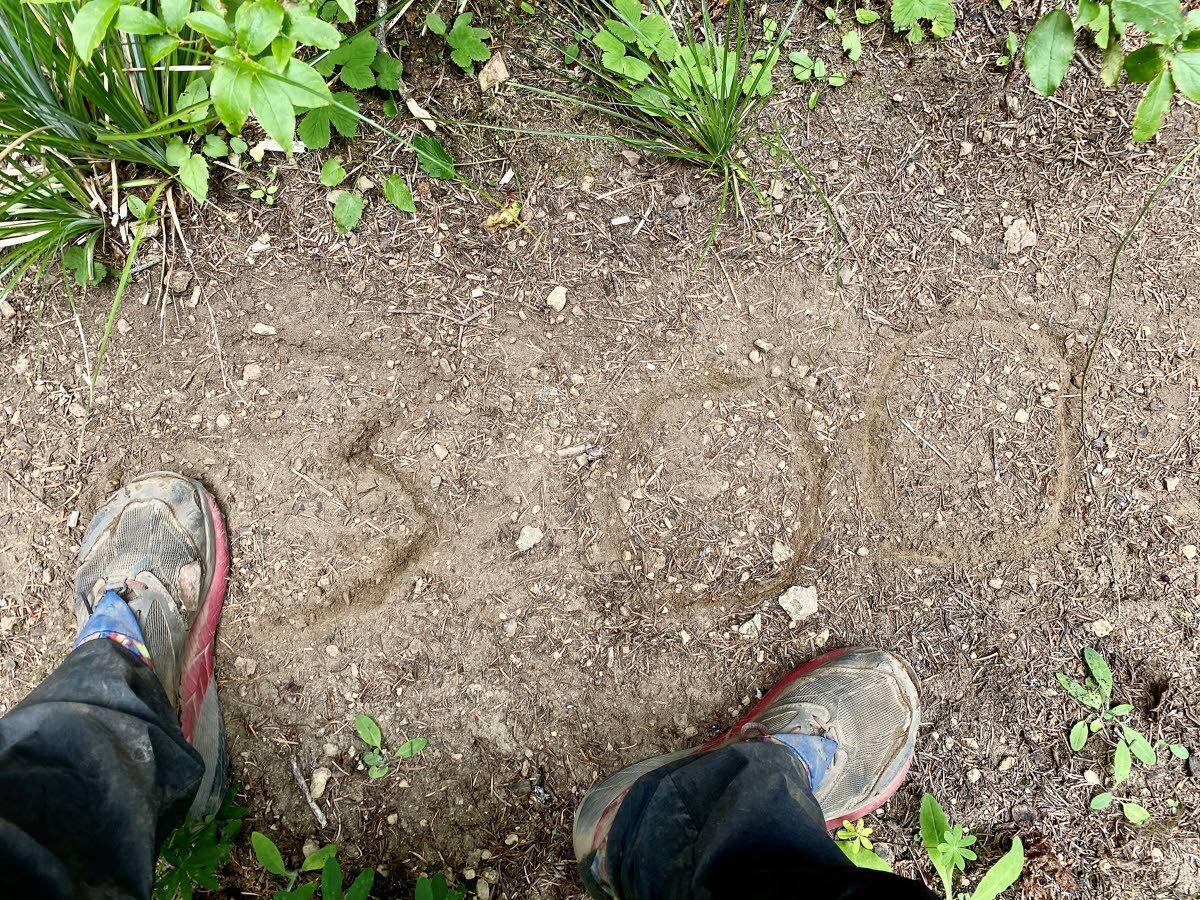 Becky Rogers logs her 300th mile in the soil of the Pacific Crest Trail. She turned back 380 miles in.

When Becky Rogers’ shoes began to fall apart on the trail, she didn’t have the option to stop to replace them. Instead, she doctored them trailside using super glue.

Becky Rogers logs her 300th mile in the soil of the Pacific Crest Trail. She turned back 380 miles in.

SEATTLE — “I think it really came down to a couple more pounds of cheese,” said ultra-endurance athlete Becky Rogers, of what would have made a difference in her recent attempt to set the fastest known time for a 500-plus-mile stretch of the Pacific Crest Trail that spans Washington state — all without resupplying.

Though Jason “Ras” Vaughn holds the speed record for men traveling the Washington section of the PCT unsupported, no such record had ever been set by a woman.

On Aug. 20, at the point where the Washington section of the trail begins near the trail’s northern terminus, Rogers set out to change that, with a pack weighing roughly 40 pounds and no plans to leave the trail between her starting point and the Bridge of the Gods, the connecting point between the trail’s Washington and Oregon sections.

Rogers, 41, who described her journey from her home in Seabeck, Wash., in Kitsap County, is a trail runner and ultramarathoner. She coaches endurance athletes through her business, Morph Conditioning, and chronicles her own endurance challenges on a Facebook page, The Phoenix Running, where she offers “training tips, nutrition and general shenanigans from the limits of human endurance,” and posted regular updates and photos from her time on the trail. She has four children, and planned to check in regularly with her husband using a satellite phone. And she carried 19 pounds of food, including cheddar cheese that she’d found kept well and provided necessary fat and protein stores for grueling journeys.

But 380 miles in, on Aug. 31, there was a problem that had compounded during her journey, and ultimately became unworkable: She didn’t have enough food. Rogers and her team made intricate fueling calculations before she left, comparing calories in to calories out, but they had to work within the limits of her backpack’s capacity, and ultimately underestimated how much food would be needed.

That might seem like a simple problem to avoid, but it’s not always possible to predict what will go wrong on a fastest known time attempt, said Joel Jamieson, a strength and conditioning coach with whom Rogers has frequently worked as she’s chased down endurance records, which she’s successfully done in the past, completing 220 miles on the trail in Oregon in the fastest known time.

“There’s not a book on how to do this stuff,” said Jamieson, and sometimes issues aren’t immediately obvious. “Until you’ve been out there ... there’s really no way to know what’s going to happen,” he said.

Rogers’ supply of bars, cold-soak meals, oatmeal and a pound of cheese began to dwindle early in her journey, and even after careful rationing beginning on her second day on the trail, Rogers knew it was only a matter of time until she ran out. Still, she kept going.

Without being able to fuel adequately even as she continued her hike, she’d begun experiencing physical symptoms caused by prolonged starvation. She found herself getting dizzy and blacking out while walking — a potentially dangerous scenario when trailside cliffs are involved. It was too risky to keep going. Rogers made the difficult decision to end her attempt at 380 miles in.

“I know where my limit is, and blacking out in a very dangerous spot is irresponsible on multiple levels,” Rogers said, adding that she “threw a bit of a tantrum” after telling her husband on her satellite phone, but knew it was the right call, at least this time around. Next time, though, the solution is relatively simple: She just needs more pack capacity for food.

“Becky’s an incredible athlete and she’s mentally tough and she’s smart,” Jamieson said. “To see the planning and time and organization, ... I have no doubt she can go out there and complete the whole thing if that’s what she wants to do.”

Rogers found that unsupported backpacking is very different from ultramarathon running, which includes “a lot of support” (you can “basically eat a hamburger” to refuel, she said); without resupplying, backpackers don’t have that luxury, and can end up facing “a whole different thing, the kind of gross deprivation that occurs.”

The rules Rogers complied with on her unsupported attempt might seem draconian to the casual hiker. Typically, hikers stop in towns along the way to replenish supplies, have a coffee or meal or take a shower at a hostel. An unsupported trip means forgoing all of that.

“The only thing you can get is natural-sourced water,” said Rogers, who even refrained from using campground water on her journey, and “other than that, everything you start with, including your trash ... you finish with it.”

In practice, this was as hard as it sounds. “If she couldn’t carry it, she couldn’t have it,” Jamieson said. Rogers’ preparation included things like trimming Ziploc bags and tags from her supplies (“every gram is measured”), carefully planning her packing list using a spreadsheet and calculating how long her food would last.

As her food stores dwindled, Rogers recalled walking past wild blueberries on particularly hungry days, the warmth of the sun making the air smell like blueberry muffins. But she couldn’t eat any berries — foraging is forbidden on unsupported trips. When Rogers’ shoes started to fall apart, she couldn’t just have a new pair sent to her next resupply stop. Instead, she said, “I was in my tent. I think it was two or three in the morning, trying to get super glue to cure ... it was so cold out, there was ice ... I mean, I started laughing, like, this is absurd. ... I should be videotaping this stuff.”

Even with these misadventures, Rogers said, it made sense to try an unsupported trek this year — the Pacific Crest Trail Association had discouraged thru-hiking on the PCT, in part because of fears hikers might spread COVID-19 to nearby communities while resupplying. “I didn’t feel like I wanted to add to that emotional burden right now,” she said.

She kept going, rising as early as midnight in an effort to walk about 40 miles a day, eating dinner at noon and walking until 7 p.m., when she’d pitch her tent and crash, cozying up against her electronics to keep the cold from draining their battery life.

She staved off trench foot. She lost a toenail (“It’s the stupid toenail I lose every year”). She glued her shoes together again while seated on a cliff’s edge watching the sunset. At a campground, she ran into a father-and-daughter duo who recognized her from The Phoenix Running.

Given how rare it is for women athletes to take on this kind of unsupported attempt, Rogers didn’t have that many models for how it might go. “I felt a little bit like Indiana Jones,” she said. It was “like stepping into the void — what’s going to happen next?”

When it became clear that she’d have to go home without setting a record 12 days in, she was frustrated. But Rogers, who said that having a family keeps her grounded on odysseys like this one, was hyperaware of the fact that if she did decline physically on the trail, she might end up needing to be extracted by a search and rescue team.

“There actually is a point where your body literally shuts down ... maybe you haven’t reached (it) yet, but I have, and then you have to make a decision like, ‘Is this OK?’ “ Rogers said. “I could have kept going, but then somebody is gonna have to come get me if I fail out there, and what are the consequences to that?”

Part of what endurance athletes do, she said, is identify limits like the one she hit, and learn from them for next time. “I think we’re all kind of looking to get to some fail point so we can figure out how to get around it,” she said.

Experimentation and adaptation are important to Rogers, regardless of what’s printed in the book of Guinness World Records. And she knows what she’ll do differently next time. “I get something out of the process. That’s the win for me. So, we’ll try it again,” she said.

Rogers is used to finding her way through. She grew up hiking, but her parents always told her not to run on trails. “So when I found out that people ran on trails and I was much older, I felt kind of like I was breaking all the rules,” she said. That was her introduction to trail running.

Her endurance efforts require a similar approach — identifying what conventional wisdom suggests shouldn’t be possible, and finding a way to do it. She brings that sense of fun and surprise to the trail, and recalled with delight the vistas and sunsets she saw along the PCT this time around. Attempting it without support made her realize how much more doable it would be with traditional opportunities to resupply along the way — something that she encourages others to do, since “my way of having a good time is not everybody’s way.”

Backpacking the PCT is “worth doing regardless of what speed you go,” she said. “The process itself is absolutely worth the whole thing ... The people you meet out there are fantastic.” And there’s something else you might consider doing differently. “Eat the damn blueberries, you know?”

“I know where my limit is, and blacking out in a very dangerous spot is irresponsible on multiple levels.”

Becky Rogers, a trail runner, who abandoned her record quest on the Pacific Crest Trail when she ran out of food