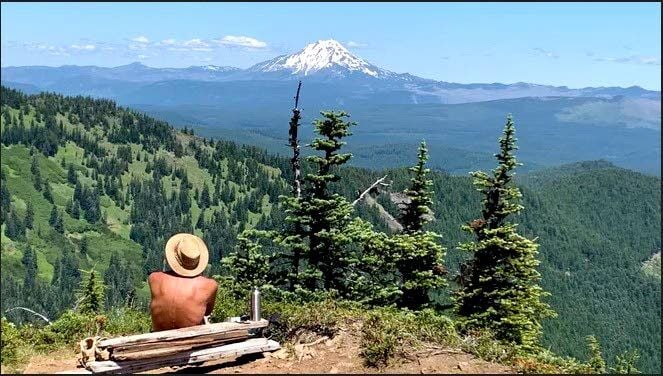 Striking views of Mount Jefferson greet visitors on the summit of Crescent Mountain in the Oregon Cascades. 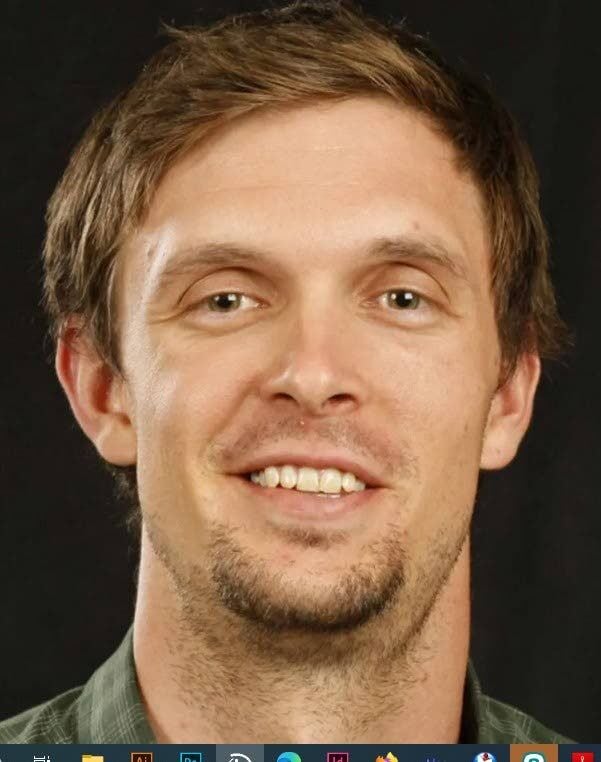 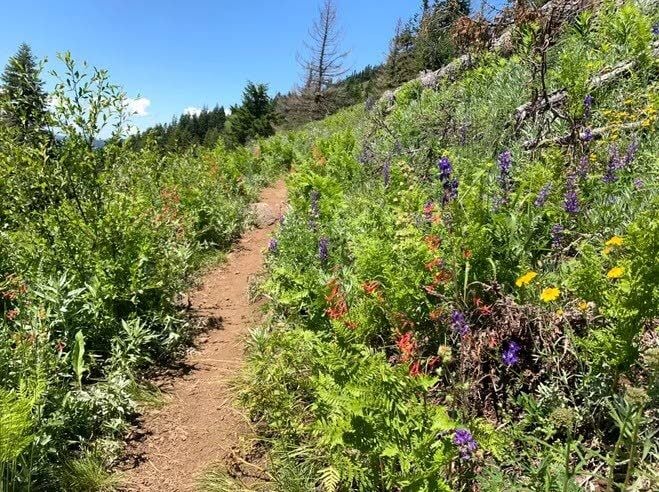 In mid-July, the wildflowers are at their peak in the meadows along the trail. 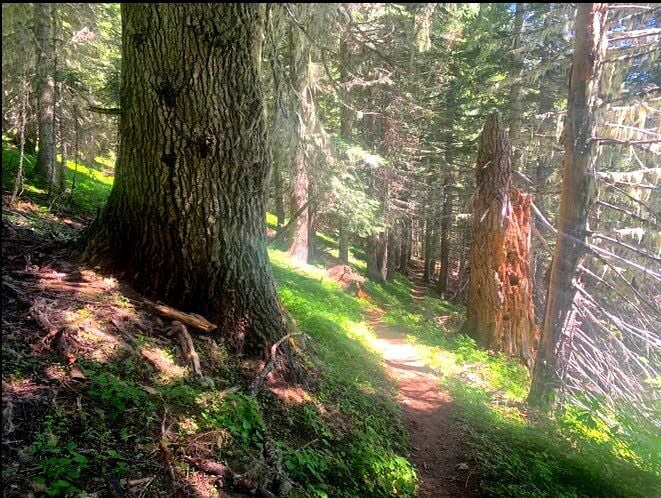 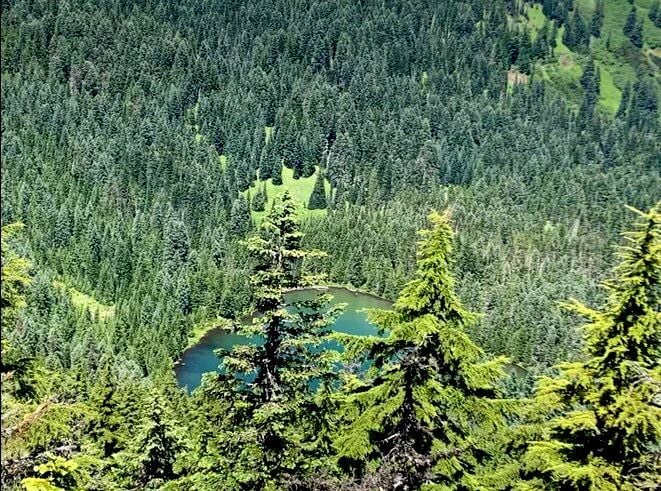 A little lake is tucked beneath Crescent Mountain.

Striking views of Mount Jefferson greet visitors on the summit of Crescent Mountain in the Oregon Cascades.

In mid-July, the wildflowers are at their peak in the meadows along the trail.

A little lake is tucked beneath Crescent Mountain.

The ancient volcanoes of the Old Cascades put on quite a show in July.

The cluster of peaks near Tombstone Pass and Santiam Junction light up with wildflowers this time of year, with high alpine meadows turning purple, red and gold while showcasing views of every major mountain in northwest Oregon.

The best-known wildflower showcase in the Old Cascades is Iron Mountain, but there are a few others just as good right next door.

That’s where Crescent Mountain comes in.

Located just north of Lava Lake Sno-Park, Crescent Mountain lives up to its name: it’s shaped like a perfect letter C. And it features one of the best, if not the best, of these hikes in July.

The journey begins in old-growth forest and climbs to one of the most beautiful alpine meadows in Oregon, before climbing again to a 5,750-foot summit with views from Mount Hood to Diamond Peak.

The hike is challenging at 9 miles round trip with 2,200 feet of climb. It’s fairly accessible off Highway 20, with a drive of about an hour and a half from Salem and Albany.

In the COVID-19 age, it’s a good one for social distancing. You’ll find a handful of cars at the trailhead on a perfect weekend in July, but everyone spreads out pretty quickly on the long trail, and there’s no problem stepping aside 6 feet or more for passing hikers.

It makes a nice alternative to Iron Mountain, which gets slammed with boots this time of year.

The Old Cascades, also known as the Western Cascades, are a fascinating region geologically.

As the name suggests, they’re an older range of volcanoes and lava vents nestled between the Willamette Valley and today’s modern or “high” Cascades such as Hood, Jefferson and the Sisters.

Here’s how geologists think our current mountains came together.

Over the millennia, volcanic activity has shifted eastward in Oregon. There are a few theories as to why, but it likely has to do with the rotation of tectonic plates or angle of subduction off the Oregon Coast.

The oldest parts of the Western Cascades, near the Willamette Valley have been so eroded over the years, they feature dense forests and rich minerals — like the Opal Creek area.

But as you move closer to the young “High Cascades” — today’s active volcanoes — the rock gets somewhat younger and less eroded.

That brings us to the Tombstone and Santiam Junction area, which is home to a cluster of peaks often called the Old Cascades. They’re taller — often 5,000 feet or more — and are made up of volcanoes that are slightly less eroded and younger.

“They’re like a young part of the Old or Western Cascades, which is why they’re better preserved,” said Adam Kent, a geology professor at Oregon State University. “They’re right on the border between the Old Cascades — that were volcanoes at one point — and the young or ‘modern Cascades,’ which are active volcanoes now.”

The combination leaves a nice mix. The ancient volcanoes still make towering mountains 5,000 to 6,000 feet tall, but they’ve also had millions of years of erosion that provides for a richer and more biodiverse forest, including the wildflower meadows and trees such as the rare and beautiful Alaska yellow cedar.

For me, the Old Cascades provide the best of both worlds: climbing high while appreciating a more intricate forest.

A hike of three parts

The reason I enjoy the hike up Crescent Mountain so much is that it’s a hike with three very distinct phases.

From the trailhead, the trail travels though beautiful old-growth forest, across a bridge over Maude Creek — a great place to soak your feet on the return — and then begins climbing, steeply, for about three miles.

Just as you’re feeling exhausted and grumpy, the reward comes.

In the second phase of the hike, the forest opens and wildflowers begin to emerge, before breaking out into an extended, spectacular alpine meadow filled with purple lupine, red paintbrush and columbine, white beargrass and blue larskpur, plus knockout views of the Three Sisters and Mount Washington.

Crescent Mountain’s high meadow is among the best in the Northwest, rivaling Dog Mountain, Silver Star and Jefferson Park.

But the hike isn’t finished.

The trail reenters the forest for a final push to the summit. Make sure to take the right-hand trail at a junction, as the other trail drops down to an alternate northern trailhead at Forest Road 840.

The summit, home to a former lookout tower, features views of Mount Hood to Diamond Peak, with everything in between right in front of you. Mount Jefferson is the real highlight, but it’s fun to test yourself on how many of the peaks you can name, from Black Butte to Three Fingered Jack. Another fun activity at the top is exploring the extended, crescent-shaped summit that tightropes on a high ridge for quite a distance.

On the way down, you get to travel through the meadow one more time before a shady hike back to your car.

The Old Cascades put on quite a show in July, and the one on Crescent Mountain is among the best.

In a nutshell: Steep and challenging hike through meadows to the summit of a former lookout tower.

Best time to hike: Mid-July for wildflowers, although it’s a stunning hike any time of year, even when wildflowers aren’t blooming.