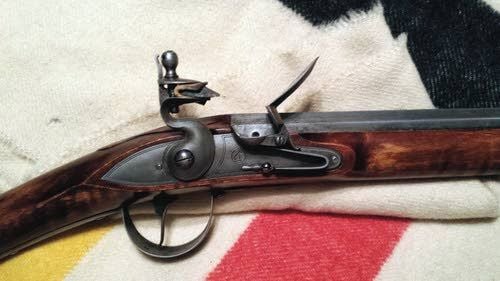 The lock area of a Northwest trade gun, or smoothbore flintlock muzzleloader, shows one of the two main ignition systems for traditional muzzleloaders. 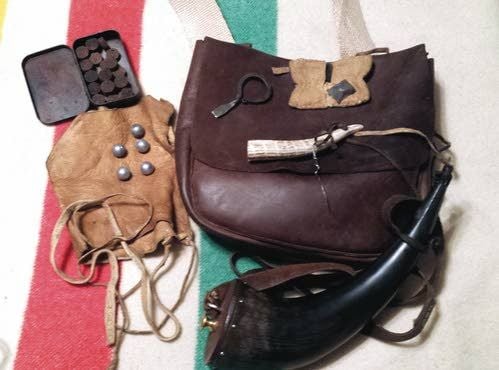 Traditional muzzleloaders require some accoutrements to keep them shooting. Shown here, clockwise from bottom, are a buffalo powder horn, leather lock cover (also called a cow’s knee), round balls, a tin of lubed fiber wads, a turn screw and spare flints, powder measure and vent pick and a bag to carry it all in. 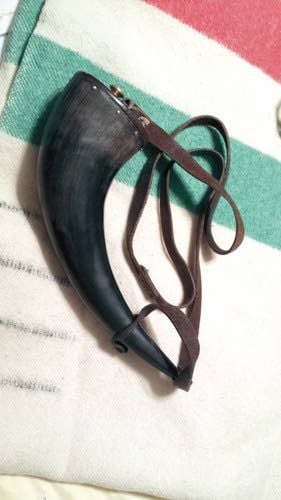 A buffalo powder horn makes a convenient and safe way to carry a supply of loose black powder. 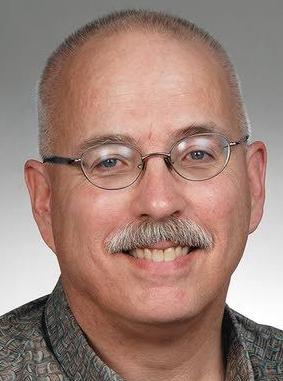 The lock area of a Northwest trade gun, or smoothbore flintlock muzzleloader, shows one of the two main ignition systems for traditional muzzleloaders.

Traditional muzzleloaders require some accoutrements to keep them shooting. Shown here, clockwise from bottom, are a buffalo powder horn, leather lock cover (also called a cow’s knee), round balls, a tin of lubed fiber wads, a turn screw and spare flints, powder measure and vent pick and a bag to carry it all in.

A buffalo powder horn makes a convenient and safe way to carry a supply of loose black powder.

Anyone who may be looking for a way to add some challenge and fun to their hunting experience should consider giving traditional muzzleloading guns a try. The old-time weapons are a hoot to shoot and, in the right hands, fully capable of harvesting any North American big game animal with a single, well-placed shot.

Before going any further, let's be clear - I have no problem with what anybody chooses to shoot and hunt with, so long as they are obeying all applicable game laws and regulations, and are pursuing their hunt in a safe and ethical manner.

Also, let me note that I have shot and hunted with modern weapons for more than 40 years. I still enjoy plinking with my Ruger .22-caliber rifle, and my last deer was killed with a Marlin, lever-action .30-30 rifle. But for many years, my most enjoyable times afield have been while carrying traditional muzzleloading firearms.

To be sure, embracing traditional muzzleloaders also means accepting some inherent limitations with the old-fashioned guns. It also means committing the time necessary to become familiar with the weapon and how to make it shoot reliably and accurately. Such familiar phrases as "hang fire" and "flash in the pan" are testament to the quirky nature of front-stuffers.

But it would be a mistake to be put off from traditional muzzleloaders because of their perceived unreliability. Handled properly, the guns will fire just about every time, and a big part of the fun of shooting the traditional guns is learning how to load and handle them so they have the best chance of going off. Admittedly, even when you do everything right, they still sometimes fail to fire, but not as often as many people might suppose.

Traditional muzzleloaders come in two basic ignition systems - percussion and flintlock. The long guns can be rifled or smoothbore. Rifled barrels allow better accuracy at longer ranges, while the smoothbores can be loaded with shot, for small game and birds, or round balls for big game. Most shooters start out with percussion guns, as they are slightly easier to handle than flintlocks. Many traditional shooters move on to flintlocks as they gain experience with the smokepoles. Either system is capable of getting the job done, both at the target range or in the field.

There is a fairly steep learning curve when it comes to shooting traditional muzzleloaders. Having an experienced hand to shoot with can certainly accelerate the process, but each gun is an individual, and it is up to the shooter to develop the load their gun likes best, and that takes time on the range. But there's nothing wrong with a good excuse to spend more time shooting, is there?

Along with the standard rules for safe gun-handling, another thing to keep in mind while shooting muzzleloaders is never to use anything but black powder or black powder substitutes in a front-stuffer. Smokeless powder should never be used in a muzzleloader, and any such use will certainly damage the firearm, at best, and at worst, the shooter and bystanders could be injured or killed.

Old-fashioned the traditional guns may be, but they are not toys. Wars have been fought and continents settled with muzzleloaders, and they have killed animals the size of bison, grizzly bears and even elephants. Handle them with the same respect and care as you would treat any firearm.

What muzzleloaders lack in muzzle velocity, they make up for in projectile size. The two most popular calibers for big game hunting are .50 and .54; a round ball of the smaller caliber starts out at a half-inch in diameter. Pushed along with an adequate powder charge, the round ball creates a substantial wound channel as the big, soft lead ball expands as it passes through the animal.

Loose black powder, typically sold in 1-pound cans, is labeled by an F system denoting the coarseness of the individual grains of black powder. The coarsest is 1F and is not commonly available. It is used in cannons and really has no practical application for sporting purposes. The next two grades, 2F and 3F, are the ones to use in rifles and smoothbores, while 4F, the finest-grained powder easily available, is used for priming flintlocks.

A general rule of thumb is to use 2F powder for the main charge in muzzleloaders of .50 caliber or larger, while using 3F in .45-caliber and smaller. This is just a rule of thumb; I use 3F powder in my .62 caliber/20 gauge flintlock smoothbore, both for the main charge and to prime the pan. My usual load is 70 grains of 3F. The advantage here is that I only have to carry one grade of powder. But, as I said earlier, each muzzleloading firearm is an individual, and the shooter will have to experiment to find the load that works best in their gun.

Another rule of thumb is to start with a load of powder equal to the ball diameter. In other words, for a .50-caliber smokepole, start with 50 grains of 2F for the main charge and work upwards from there, without exceeding the manufacturers recommendation for maximum load. There is a point of diminishing returns, where more powder just adds to recoil and fouling, without an appreciable increase in muzzle velocity. A load of 75 grains of 2F or 3F is enough to put a ball clear through a good-sized deer.

Unlike smokeless powder, black powder is loaded by volume, not weight. Guns should never be loaded directly from a powder horn, flask or other bulk container. Pour the powder into a measuring device, then pour it down the barrel. I use an antler tip that has been hollowed out and holds 70 grains.

Another factor to keep in mind when choosing a muzzleloading rifle is the rate of twist for the barrel. Many commonly available front-stuffers have a rate of twist of 1:48; in other words, there is 1 inch of twist for each 48 inches of barrel length. This is a good compromise rate of twist; slow enough to provide good accuracy with patched round balls with decent hunting loads, but also fast enough to stabilize conical slugs often used in muzzleloaders.

As a person gains more experience with the old guns, they can choose a rate of twist that suits their needs. For instance, a slower rate of twist would be good for someone who wanted to shoot patched round balls with fairly heavy powder charges. Many of the semi-custom and custom muzzleloaders have barrels with rates of twist from 1:60 to 1:72, or even slower. These rifles work well with the patched round ball, but generally speaking, the twist is too slow to adequately stabilize a conical projectile. Those who primarily plan to shoot these slugs, say for elk, moose or bear, might do well to specify a faster rate of twist than the standard 1:48.

Of course, muzzleloaders aren't just for big game hunting. Many people enjoy hunting small game with front-stuffers in the .32 caliber to .40 caliber range. The smaller-bore guns take proportionately smaller charges, and can be a good choice for someone who just wants to do some target shooting or add some small critters to the larder. The smaller charges and projectiles make these more economical to shoot, although even the larger bores are a bargain compared to some modern cartridges.

Black powder shotguns are also available for those who prefer scatterguns. Properly loaded and handled, these guns are good for grouse, pheasant and waterfowl, and pack a ballistic punch that is almost on-par with modern, cylinder-bored shotguns.

Many shooters, myself included, have discovered the joy of shooting flintlock smoothbores. My gun is a semi-custom replica of the Northwest trade gun, which was sold by fur trading companies to American Indians and white hunters by the thousands during the frontier era. Other smoothbore shooters prefer guns with French influence, and still others fancy a firearm from a particular historical era, such as the model 1803 Harper's Ferry rifle rumored to have been issued to Lewis and Clark for their journey to the Pacific Ocean.

I haven't even touched on handguns; there are plenty of muzzleloading pistols for shooters to choose from. They can be carried as a companion piece to a rifle or smoothbore long gun, or used in their own right, perhaps to hunt rabbits or birds. Be sure to check regulations before using pistols for hunting.

As you can see, the world of traditional muzzleloading firearms is diverse and fascinating, and there is something available to appeal to almost any shooter. So, if you are ready for a fun challenge, and the chance to add new dimensions to your shooting and hunting life, consider traditional muzzleloaders.

Pierce is a Tribune copy editor and former member of the American Mountain Men. He can be reached at jpierce@lmtribune.com.