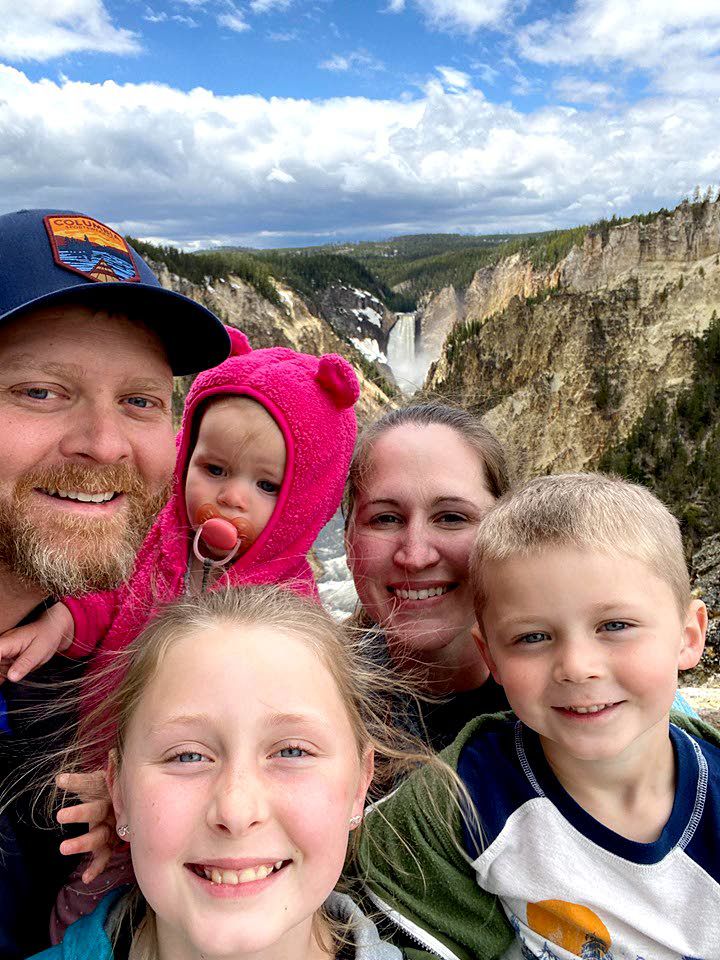 The VanZant family drove from Lebanon, Missouri, to vacation in Yellowstone National Park in May. From left is Michael, baby Brynn, Piper, Ashley and Cade posing at the lower falls of the Yellowstone River. 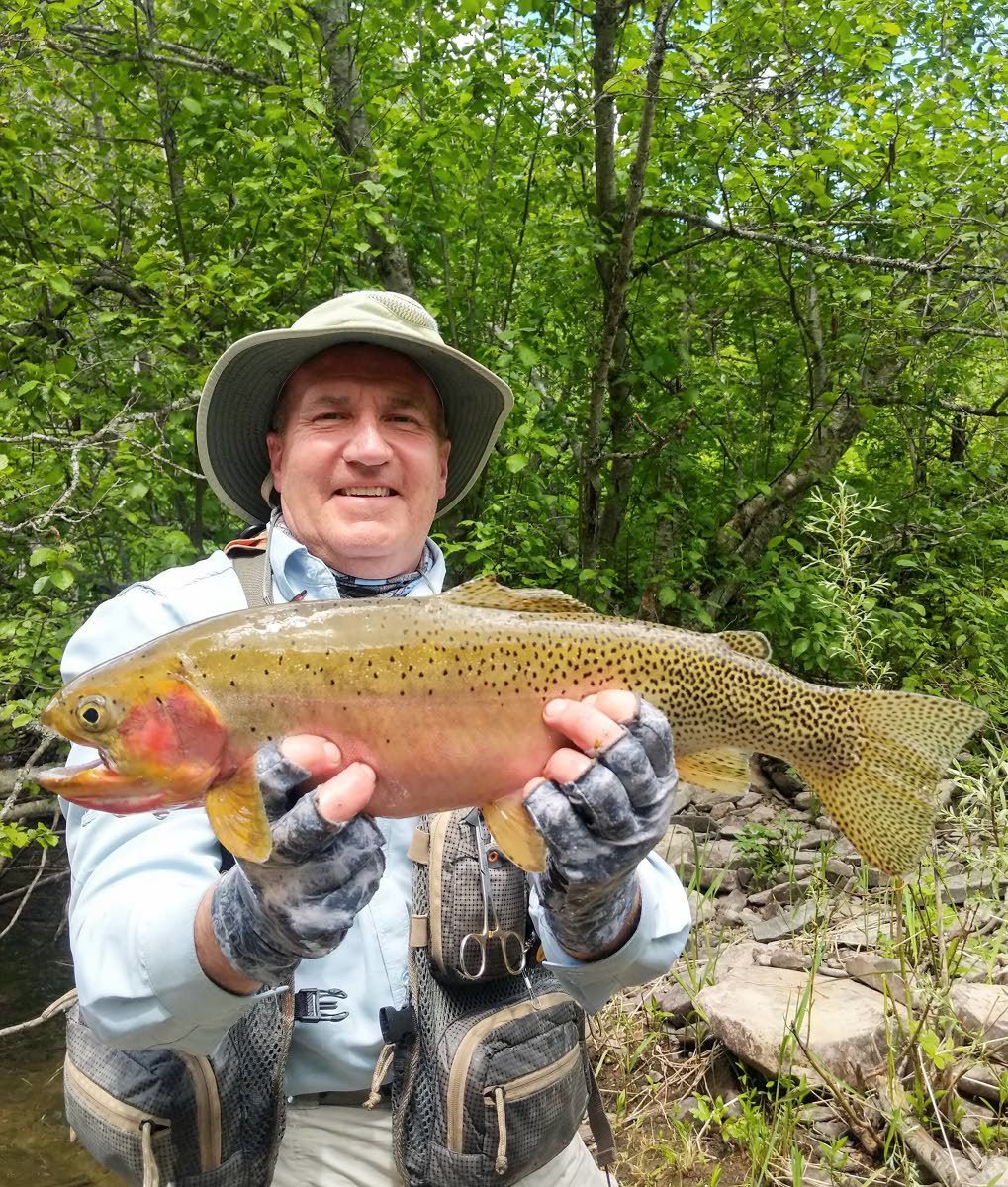 The VanZant family drove from Lebanon, Missouri, to vacation in Yellowstone National Park in May. From left is Michael, baby Brynn, Piper, Ashley and Cade posing at the lower falls of the Yellowstone River.

It took Ashley VanZant about an hour to stop shaking from the adrenaline rush.

“It was frightening, that’s for sure,” she recalled in a phone interview.

Ashley, her husband, Michael, and their three children were spending their first day in Yellowstone National Park. A few days earlier they had made the 20-hour drive from their home in Lebanon, Mo., for a family vacation. Yellowstone was a backup plan after the coronavirus pandemic halted the family’s visit to Disney World.

Covering more than 3,400 square miles of rugged country, Yellowstone remains a wild island in an ocean of human development. Partly because of its large size, along with protections afforded by forward-thinking lawmakers, the park remains a wild place with a full complement of wildlife ranging from elk and bison to large predators such as grizzly bears and wolves.

Visitation to Yellowstone had been about 4 million people a year before the novel coronavirus outbreak this spring. So keeping wild animals and curious tourists safely apart for the benefit of both is a constant struggle for park staff.

The VanZant family was visiting Yellowstone with hopes of seeing the park’s wildlife, geysers and mud pots. On May 26, they stopped at Hayden Valley’s Otter Creek picnic area along the Yellowstone River at about 2 p.m. to eat lunch. The scenic pullout is between the Lake and Canyon areas on the east side of the park. A man was fishing nearby when they chose a table next to the water and spread out their food.

Shortly after their arrival the angler began packing up his gear. That’s when the VanZants noticed what looked like a dog on the loose. With the angler so close they figured he had let his pooch out of his vehicle. Unleashed dogs aren’t allowed in the park. Then Michael realized it was a wolf. Ashley estimated the wolf’s distance at 100 to 150 yards.

The parents put their two oldest children — Piper, age 10, and 5-year-old Cade — up on the picnic table for a better view before the big gray canine disappeared into some trees. Their youngest, 1-year-old Brynn, was in a baby carriage next to the table.

“Then his head popped up about 10 yards away,” just behind a downed tree, Michael said. “Then he jumped the log and ran right to us and stopped 5 feet away.”

That’s when Michael put away the cellphone that he’d been using to take photos and drew his .380 caliber pistol.

“It didn’t feel like we were in danger of a wolf hunting us. It was more of an encounter,” said the eighth grade special education teacher. He drew the pistol in case he needed to fire a warning shot to scare the wolf away, not to harm it, he said.

Yellowstone is home to about 100 wolves in eight packs. The Hayden Valley, where the VanZants were picnicking, is within the range of the Wapiti Lake pack, which as of last year numbered 19 animals.

“The Wapiti pack, that this wolf is a member of, has had a lot of contact with people in Hayden Valley,” said Doug Smith, Yellowstone wolf biologist, calling the pack the most exposed to humans of any in the world.

He thinks the wolf the VanZants saw was a yearling, somewhat comparable in attitude and behavior to a human teenager roaming without parental oversight. Smith called it “extraordinarily rare” for a wolf to approach humans so close.

Close encounters with wolves are discouraged by Yellowstone National Park’s staff. All visitors are advised to stay 100 yards from wolves and bears, 25 yards from all other animals. If the animal gets closer, humans are required to back up. Because wild encounters with wolves and bears can be rare, many tourists pay to see them at West Yellowstone’s Grizzly and Wolf Discovery Center, a zoolike setting.

By their nature wolves are afraid of humans, often observed only through telescopic spotting scopes or long camera lenses at a great distance. A wolf attack of a human hasn’t been recorded in the Lower 48 states since the early 1900s. Canada and Alaska, however, have had such incidents more recently.

When wolves seem unafraid of humans in Yellowstone, the park’s staff employs hazing methods that include firing bean bags, paintballs, rubber bullets and cracker shells at the animals, Smith said, calling them “teachable moments” for the wolves.

In the 25 years since wolves were reintroduced to Yellowstone, despite predictions that human fatalities would occur, there have been no close calls, Smith said.

“Hazing has worked, and if it doesn’t we’ll take them out,” he said, noting that two wolves have been killed for that reason. “We want to be proactive, not reactive.”

For the VanZants, their riverside picnic quickly turned into a strange encounter. After jumping the log, the wolf paced from side to side, slowly edging closer.

“It was almost like he was trying to push by us” to reach the children, Michael said.

Ashley’s “mama bear mode” prompted her to pick up nearby sticks to throw at the wolf. One branch that struck the wolf in the side of the head made it pause, another stick hit its side and the wolf growled.

“Her instinct to get the kids out of there was the best for us and the wolf,” Michael said.

Prompted by Ashley’s actions, Michael picked up a large branch and began waving it back and forth in front of the wolf to push it back. Once he established some room, Ashley loaded the children in their truck. Then the wolf ran off, leaving the family pumped with adrenaline.

“It was like he was as confused as we were for a little bit,” Michael said.

“It was scary, but at the same time it was awesome.”

Ashley guessed the entire encounter lasted less than five minutes, although it seemed a lot longer when she was screaming at the wolf.

Michael reported the incident to a ranger. Smith said that since the encounter his team, the bear management staff and park rangers have been patrolling the area to keep animals and tourists separate.

Although scared during the encounter, afterward 10-year-old Piper became more interested in the park’s wildlife and recounted the family’s wolf tale to anyone who would listen, Michael said. Son Cade, on the other hand, seemed unfazed by the wolf interaction but was worried when the family spotted a bear from their car.

The wolf wasn’t the couple’s first encounter with a wild predator. Years ago, while hiking in Grand Teton National Park, they encountered a berry-eating bear in some bushes near the trail they were walking.

“I told the kids, now they have their own story that’s even crazier,” Michael said. “It’s just very, very weird.”

After posting photos of the encounter on his Facebook page, some people criticized the couple and Michael’s possession of a handgun. Firearms are allowed in the nation’s parks but aren’t allowed to be discharged.

The disparaging comments were a harsh reminder of civilization’s darker side, the family said, especially after being out of touch for several days in the wilds of Wyoming, camping and touring Yellowstone’s scenic and geothermal wonders.

“I can’t think of anywhere else that would have been as much fun,” Michael said.

He’d like to return in the future and visit the Lamar Valley, which was closed when the family visited. The Lamar is known as one of the best places in the world to see wolves in the wild.