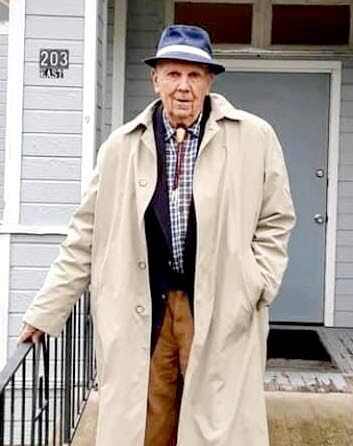 He was preceded in death by his parents, the Rev. William H. Sugden and Laura (Schubert) Sugden as well as his brother Dr. William A. Sugden and sister Marianne (Sugden) Brewer. He is survived by his wife of 67 years, Mary H. Sugden; two sons, Mark (Joy) Sugden and Bill (Kim) Sugden; two daughters, Beth (Sugden) Rubertas and Marilou (Sugden) Dietz; 11 grandchildren and five great-grandchildren.

Hank was born in Wilkes-Barre, Pa., and achieved the rank of Eagle Scout while attending Myers High School. He was one of three young men from Pennsylvania chosen for the U.S. Navy training program and chose to attend Princeton University. He was active in the university’s marching band as well as the naval ROTC program. He earned a degree in English in 1951 and immediately entered Princeton Seminary.

He was ordained to the ministry May 17, 1954, at his father’s church in Wilkes Barre, Pa. Rev. Sugden was commissioned into the chaplain corps of the U.S. Navy on Aug. 26, 1954, and was assigned to MCBC LeJune. He was sent to Camp Fuji McNair at the base of Mt. Fuji in Japan and then subsequently stationed to MCBC Okinawa. He returned to the United States in 1956.

In 1956, he and Mary moved to Lapwai to serve the Lapwai Valley Presbyterian Church and the Winchester Presbyterian Church. He and his family returned to Princeton Seminary in 1964 so he could resume graduate studies in the Russian language, anticipating serving in the Soviet Union. In 1965, he accepted a position returning to Lapwai and began his service in the Nez Perce Presbyterian churches. He enjoyed working with youth groups and looked forward not only to the many youth trips he organized, but also to the vacation Bible school summers at Talmaks.

Hank stepped back from ministerial service in the early ’70s and accepted a position with the city of Lapwai as the head of maintenance. He also served as the the assistant fire chief of Lapwai, as well as chief of his own fire department, the Lapwai Rural Fire Department. In 1984, he returned to the ministry at the Lapwai Valley Presbyterian Church, transitioned to interim in 1998, and permanently retired in 2007.

Hank spent his retirement pursuing activities he enjoyed. He had a gift for languages, to include studying Latin, Greek, Hebrew and Russian. He was also fluent in Japanese and of course the Nimiipuu language, which he meticulously learned from the church elders. He was able to utilize these languages as he traveled. He accepted an invitation, during his travels, to speak to a Russian Baptist church, which he did without a translator. He enjoyed traveling and took trips to Russia, Japan and the churches of Paul. In addition, hiking, especially above the Selway, and camping, especially at Talmaks were some of his favorite activities. He spent many hours reading and enjoying the trees that he planted around the Lapwai house. However, even with those numerous life experiences, he was best known for his enjoyment of dessert.

There will be a service, but we will not be gathering until the risk to his community is minimal. The family requests that any memorials be sent to the Talmaks Association in care of its president, Joanne Kaufman, 165 South Howard, Spokane, WA 99201.