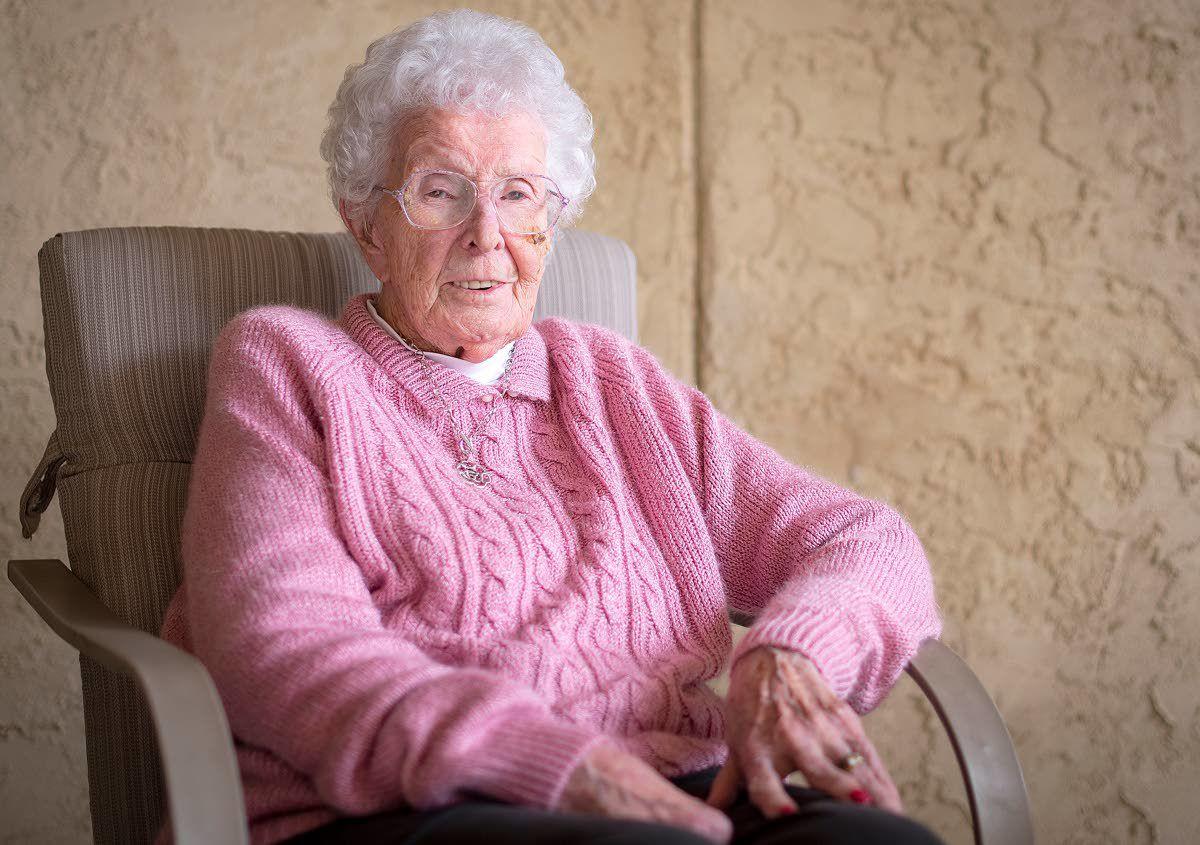 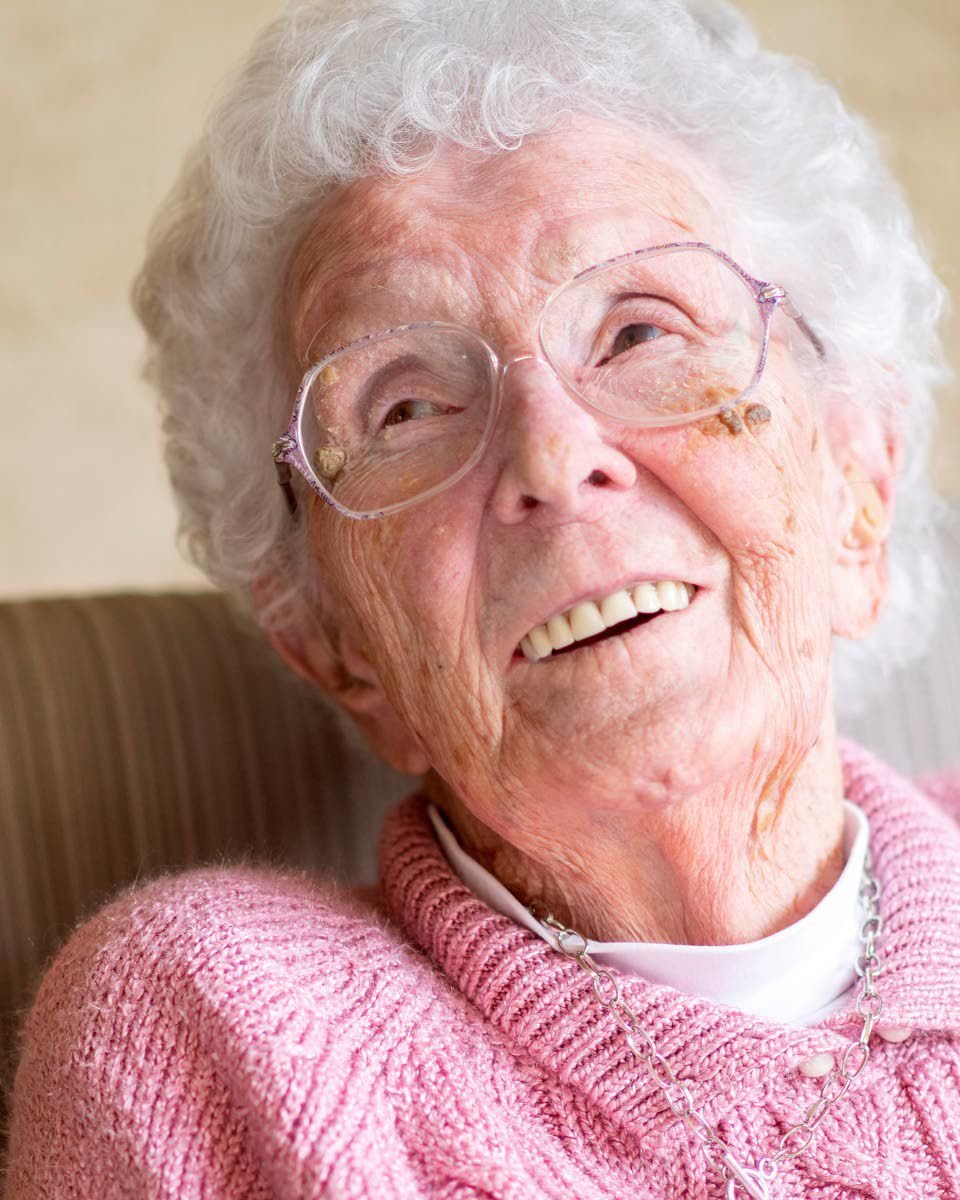 Pearl Dielman, 107, smiles at her granddaughters Saturday during an interview. 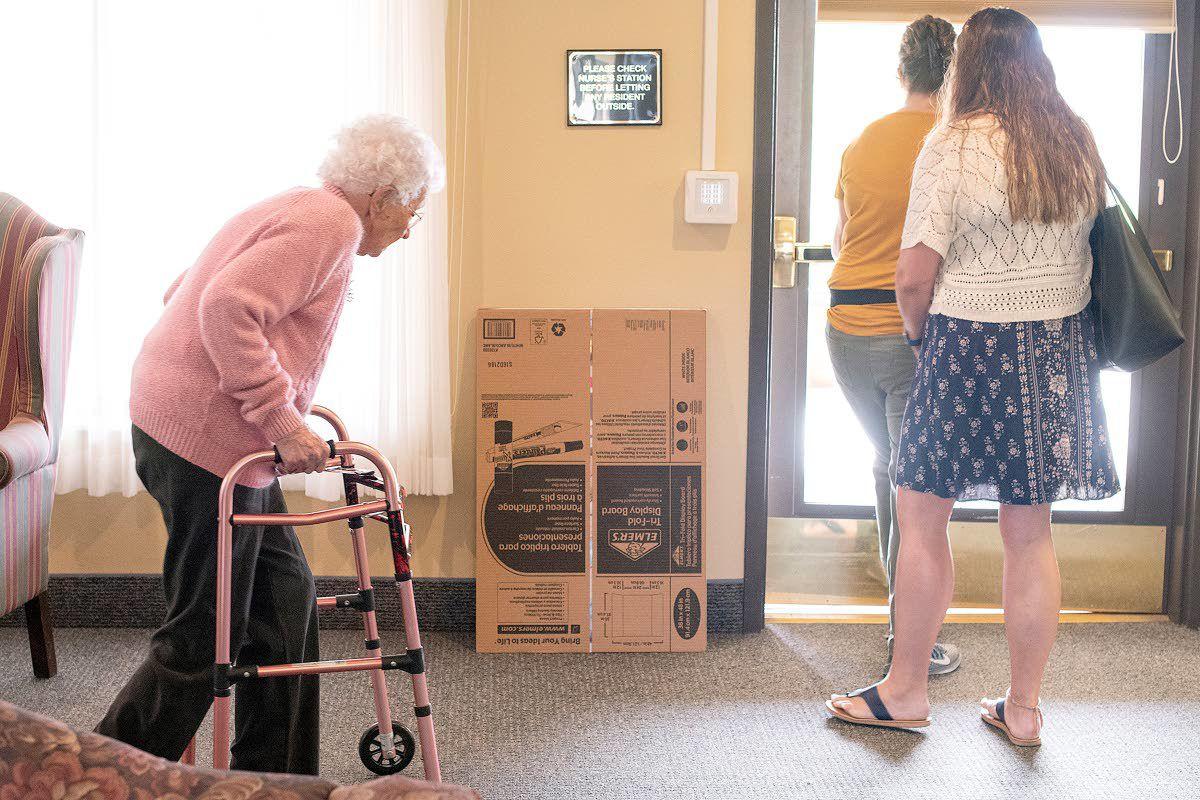 Pearl Dielman, 107, walks herself out to the patio for an interview Saturday afternoon at Royal Plaza Retirement Center in Lewiston.

Pearl Dielman, 107, smiles at her granddaughters Saturday during an interview.

Pearl Dielman, 107, walks herself out to the patio for an interview Saturday afternoon at Royal Plaza Retirement Center in Lewiston.

Pearl Dielman tells her family she can’t claim to be a spring chicken anymore, “because I’d be lying.”

Dielman celebrates her 107th birthday today and said she has reached this exalted age, “just living right, I guess.”

Born to Walter and Edna Brown in Stevensville, Mont., Dielman was one of 13 children. She and her twin brother, Earl, were third place in the lineup, and later on there was another set of twins, Ray and Fay.

The family lived on a farm, and Dielman attended school through the eighth grade.

In 1931, she married Van Bailey, and they lived on a wheat farm in Montana, where she cooked for the hired hands. She and Bailey had one daughter, Vanita, before they divorced. During World War II, Dielman worked as a crane operator in Portland and later worked as a nurse at a veterans home in Stevensville.

In 1949, she married Byron Dielman, and they spent summers mining for gold in Arizona. After her husband died in 1982, Dielman moved to Lewiston to be closer to her daughter, Vanita, and her grandchildren.

Granddaughters Debra McLean and Tasha Carper, both of Lewiston, remember that Dielman had a feisty temperament and was always full of life.

“Back in the day she wore high heels everywhere, even cleaning house,” Carper said. “When I used to stay with her when I was a little kid, we’d walk down to the A&B grocery store and she would walk in her high heels and walk back.

“She had a hard time giving up her high heels; that was a little bit of a fight. Kind of like when she had to give up her license and she couldn’t drive her Cadillac anymore.”

Dielman always enjoyed dressing up, including wearing wigs and fancy hats. Even now, as a resident of Royal Plaza, she often wears nice clothes and jewelry and loves having her hair and nails done.

She flashed her newly painted nails to her granddaughters and said: “See my pretty nails. See how nice they are.”

When her daughter, Vanita, died at the age of 83 in 2014, Carper said the doctor at the hospital was surprised to discover that Vanita’s mother was still living. Dielman’s own mother lived to be in her 90s. Of her many siblings, one sister, Doris, 81, is still living.

Dielman has always had generally good health, and after she was briefly hospitalized for an intestinal problem a dozen years or so ago, she stayed for a short time in the nursing home and then returned to living on her own until she was 103. She moved in with her granddaughter for a short time, then relocated to Royal Plaza, where she takes part in activities and loves to go on outings.

Carper said her grandmother also “loves her sweets. She doesn’t pass up a sweet, ice cream, cake, pudding, cookies, candies, whatever.” But other than vitamins, she takes no medications and is not showing signs of dementia, even though her memory is failing and her hearing is not what it used to be.

The family had a private celebration Sunday at Red Lobster, where she likes the clam chowder, and will have a birthday cake celebration today at Royal Plaza with the other residents.

She no longer recalls many of the events of her long life, but one skill she does remember is how to yodel.