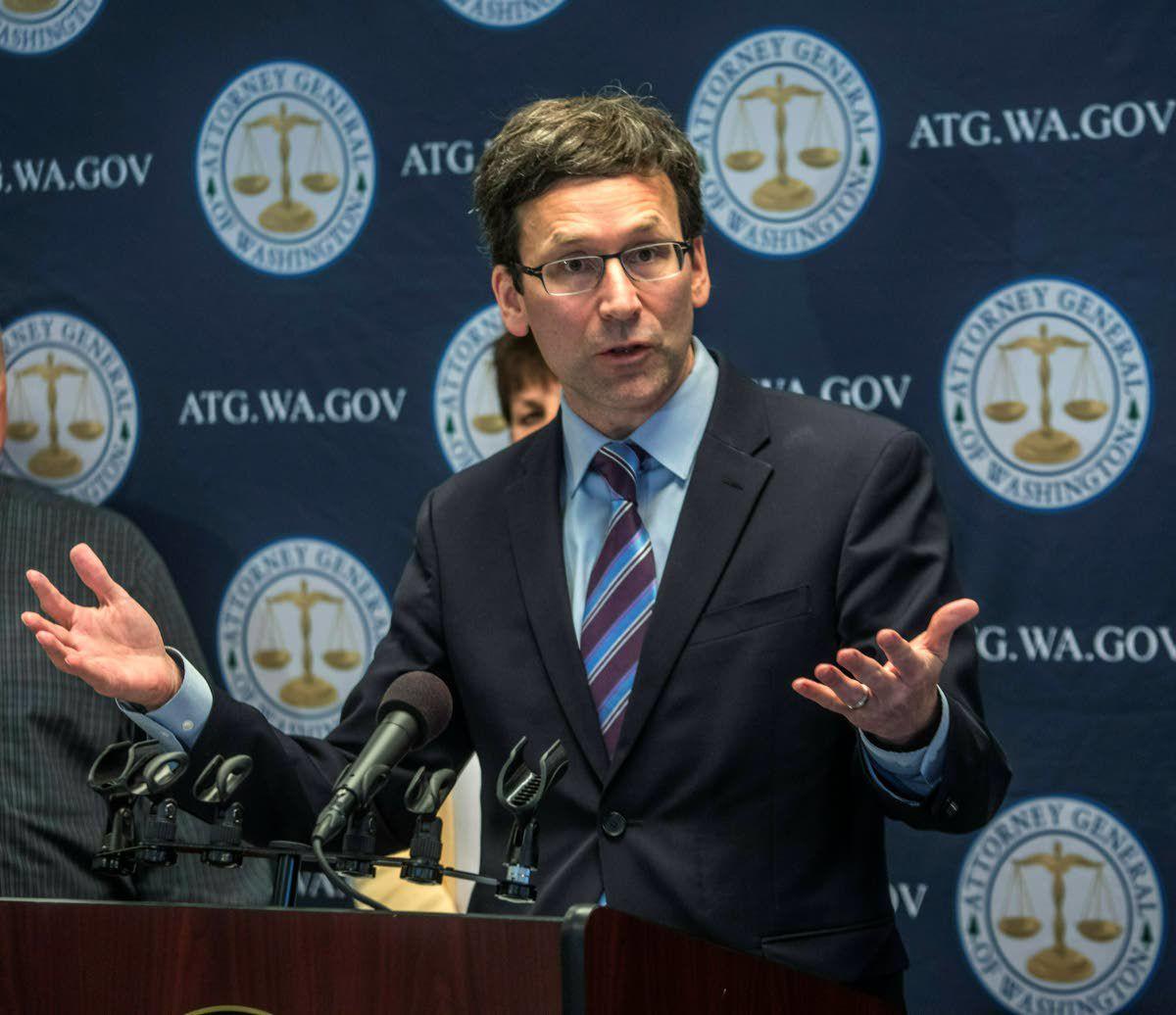 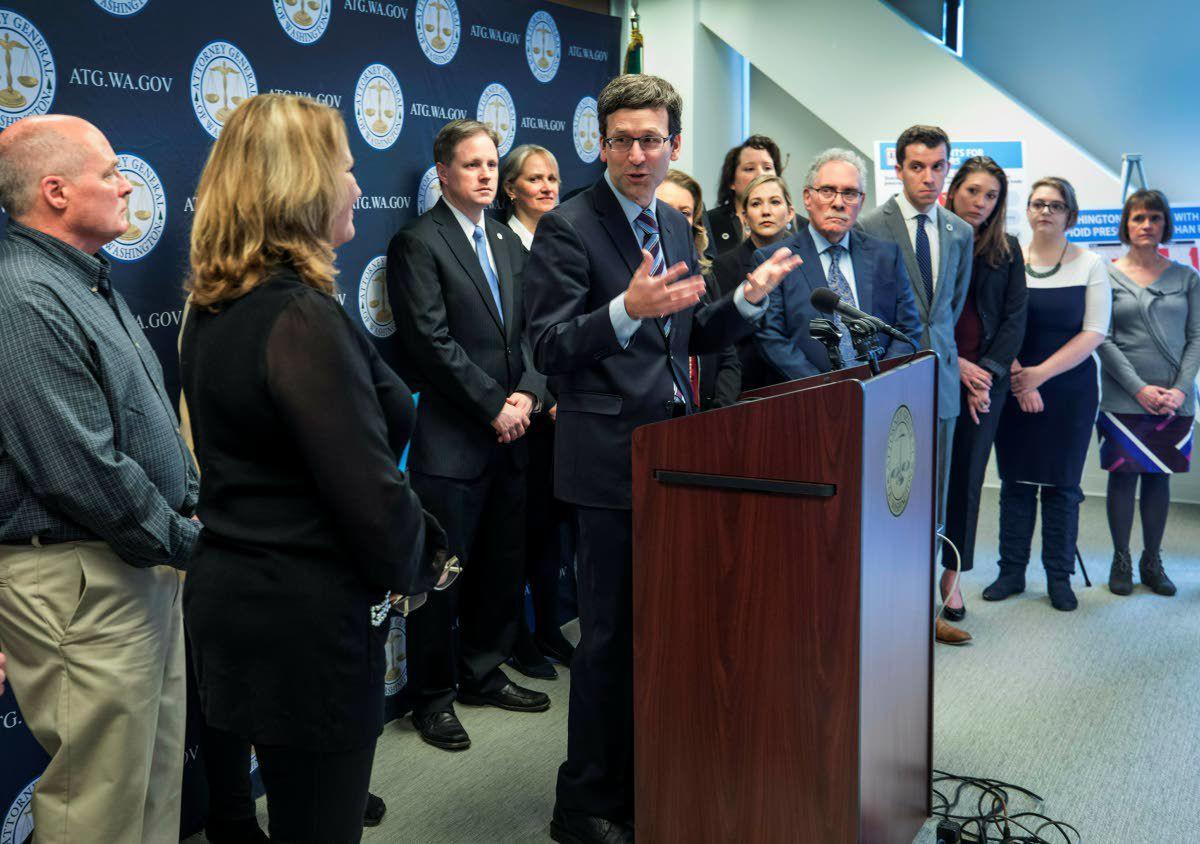 Washington State Attorney General Bob Ferguson announces a major lawsuit against drug distributors related to Washington's opioid epidemic, Tuesday, March 12 2019 in Seattle. He is surrounded by his legal team, victims from the opioid epidemic, and researchers in the field. (Steve Ringman/The Seattle Times via AP)

Washington State Attorney General Bob Ferguson announces a major lawsuit against drug distributors related to Washington's opioid epidemic, Tuesday, March 12 2019 in Seattle. He is surrounded by his legal team, victims from the opioid epidemic, and researchers in the field. (Steve Ringman/The Seattle Times via AP)

SEATTLE — Washington on Thursday became the latest state to sue major distributors of opioids, saying the companies made billions of dollars while ignoring signs of a growing crisis fueled by addiction to the drugs.

Attorney General Bob Ferguson filed the lawsuit Tuesday in King County Superior Court in Seattle against San Francisco-based McKesson Corp.; Dublin, Ohio-based Cardinal Health Inc.; and Chesterbrook, Pa.-based AmerisourceBergen Drug Corp. The companies shipped huge amounts of oxycodone, fentanyl and other painkillers into Washington and failed to comply with requirements that they identify suspicious orders that could be diverted to the illegal drug market and report them to law enforcement, he said.

“For years these companies illegally shipped suspicious orders into our state,” Ferguson told a news conference. “Their conduct, put quite simply, fueled the state’s opioid epidemic.”

The Attorney General’s Office said Washington is the 10th state to sue at least one of the distributors.

Washington is also among the states suing opioid manufacturers like Purdue Pharma. In all, government entities including states, cities and American Indian tribes have filed more than 1,000 lawsuits against drugmakers, distributors and others involved in the opioid crisis. The first test claims are set to go to trial later this year in a massive, consolidated federal court case in Ohio.

From 2006 to 2017, more than 8,000 Washington residents died of opioid overdoses — more than died in car accidents or shootings, Ferguson said. During much of that time, the companies were flooding the state with more than 2 billion opioid pills, he said.

The attorney general highlighted rural Pend Oreille County in Washington’s northeastern corner. In 2014, he said, the companies sent enough opioids to the county to supply each of its roughly 13,000 residents with dozens of pills.

The companies have said they are taking steps to help address the crisis and noted that they fulfill prescription orders placed by properly licensed health care providers.

“We are dedicated to doing our part as a distributor to mitigate the diversion of these drugs without interfering with clinical decisions made by doctors, who interact directly with patients and decide what treatments are most appropriate for their care,” AmerisourceBergen said in an emailed statement Tuesday. “Beyond our reporting and immediate halting of potentially suspicious orders, we refuse service to customers we deem as a diversion risk and provide daily reports to the DEA that detail the quantity, type, and the receiving pharmacy of every single order of these products that we distribute.”

Ferguson noted that McKesson has faced more than $160 million in federal fines, with the Drug Enforcement Administration determining that the company filled “hundreds of suspicious orders placed by pharmacies participating in illicit internet schemes, but failed to report the orders to DEA.”

Cardinal Health has been fined five times, totaling nearly $100 million, since 2008, he said.