Vista Outdoor Vice President of Ammunition Marty Zacha welcomes community members and dignitaries to a ribbon-cutting ceremony Wednesday for an expansion to the rimfire production line at the company’s Southport facility. 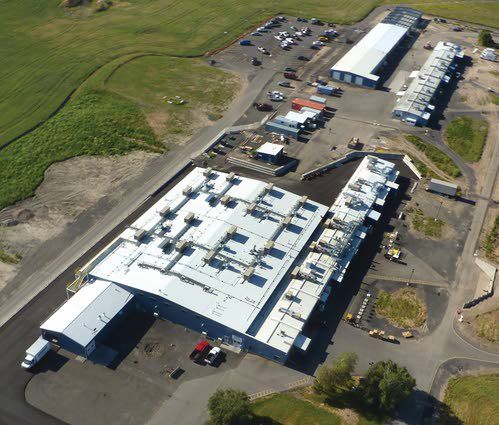 New buildings for the CCI/Speer operations at the Southport Industrial Park just south of Lewiston house a 37,000-square-foot expansion to the Vista-owned factory.

Vista Outdoor Vice President of Ammunition Marty Zacha welcomes community members and dignitaries to a ribbon-cutting ceremony Wednesday for an expansion to the rimfire production line at the company’s Southport facility.

New buildings for the CCI/Speer operations at the Southport Industrial Park just south of Lewiston house a 37,000-square-foot expansion to the Vista-owned factory.

For a company that started out in some renovated chicken coops, CCI/Speer sure has come a long way.

That was apparent during a well-attended ribbon-cutting ceremony Wednesday that celebrated the latest high-tech addition to the company's Southport Avenue manufacturing plant.

"This is the first phase of a multi-phase project," noted Marty Zacha, vice president of ammunition for Vista Outdoor, which owns CCI/Speer and a number of other outdoor, sporting goods and recreational equipment manufacturers.

The 37,000-square-foot addition required an investment of about $35 million, Zacha said. The price tag for the overall expansion is about $70 million. It was initially projected to take five years, but that may slip some, given the recent slowdown in the ammunition market.

"We might have to go out a little farther, but we're working hard to keep as close to that plan as possible," Zacha said. "The long-term vision is to have all our operations up here."

Besides the Southport facility - which now includes several buildings totaling about 350,000 square feet - CCI/Speer continues to manufacture products at a plant on Snake River Avenue.

Operations Manager Bill Mackleit said that site originally was a 17-acre chicken ranch. Vernon Speer began making ammunition in Lewiston in 1934. His brother, Dick Speer, joined him in 1951 and opened CCI, which made component primers for the military and hobby reloader markets.

Dick Speer had been a machinist at Boeing. After he bought the chicken ranch, Mackleit said, he "renovated the chicken coops and started producing."

The company later purchased 369 acres at the Southport site. The latest addition provides room for a variety of proprietary equipment used to make .22-caliber rimfire ammunition.

Much of the equipment was designed by company engineers, in cooperation with outside vendors. The focus, Mackleit said, is on "continuous flow" - starting out with raw material and moving through to the finished product in a sequence of steps without building any pockets of inventory along the way.

The result, he said, has been a substantial and "very satisfying" reduction in the time needed to complete an order.

The expansion also allowed the company to make improvements in other areas, Mackleit said, including ergonomic processes that reduced the amount of heavy lifting employees need to do, reducing exposure to "energetics" or explosives, and upgrading the plant's industrial hygiene facilities.

Doug Mattoon, executive director of the Valley Vision economic development organization, noted that CCI/Speer, together with the other ammunition-related firms in the Lewiston-Clarkston Valley, collectively generate about $800 million in annual economic activity and employ more than 3,300 people, or about 19 percent of the valley's total workforce.

"I want to emphasis the point that economic development is a team sport," he said. "Without the (Idaho) Department of Commerce and the (Nez Perce) County commissioners, this project would not have happened."

Given the size of the expansion, Zacha said the company was courted by several other states. However, it quickly became apparent Lewiston was the right location.

Vista Outdoor "has facilities in several states, and trust me, doing something like this wouldn't have been so easy in other locations," he said.

Lt. Gov. Brad Little, U.S. Sen. Jim Risch and Idaho Department of Commerce Director Megan Ronk were among the several dignitaries who attended the ceremony. Little said the expansion is a tribute to the community.

"I don't know if Vernon Speer envisioned this in 1934," Little said. "but what he did see was the great labor force in the LC Valley and how people here value the Second Amendment and hard work. It's ingrained in the DNA of this valley to build things - particularly outdoor things. I'm very impressed with the can-do attitude in this community."

Lewis-Clark State College came away a big winner Wednesday during a ribbon-cutting ceremony celebrating the expansion of the CCI/Speer manufacturing plant on Southport Avenue.

The money is a contribution toward the $20 million Career-Technical Education building LCSC plans to build in the Lewiston Orchards. The facility will serve as a regional training and workforce development center.

“The technical center means a lot to us as a company, and it’s definitely needed in the valley,” Zacha said.

Earlier this year, Gov. C.L. “Butch” Otter and the Idaho Legislature set aside $10 million toward the project, subject to LCSC raising the remaining funds. Fernandez has previously indicated the rest of the money will come from federal grants, institutional reserves and through contributions from local supporters like Vista Outdoor.