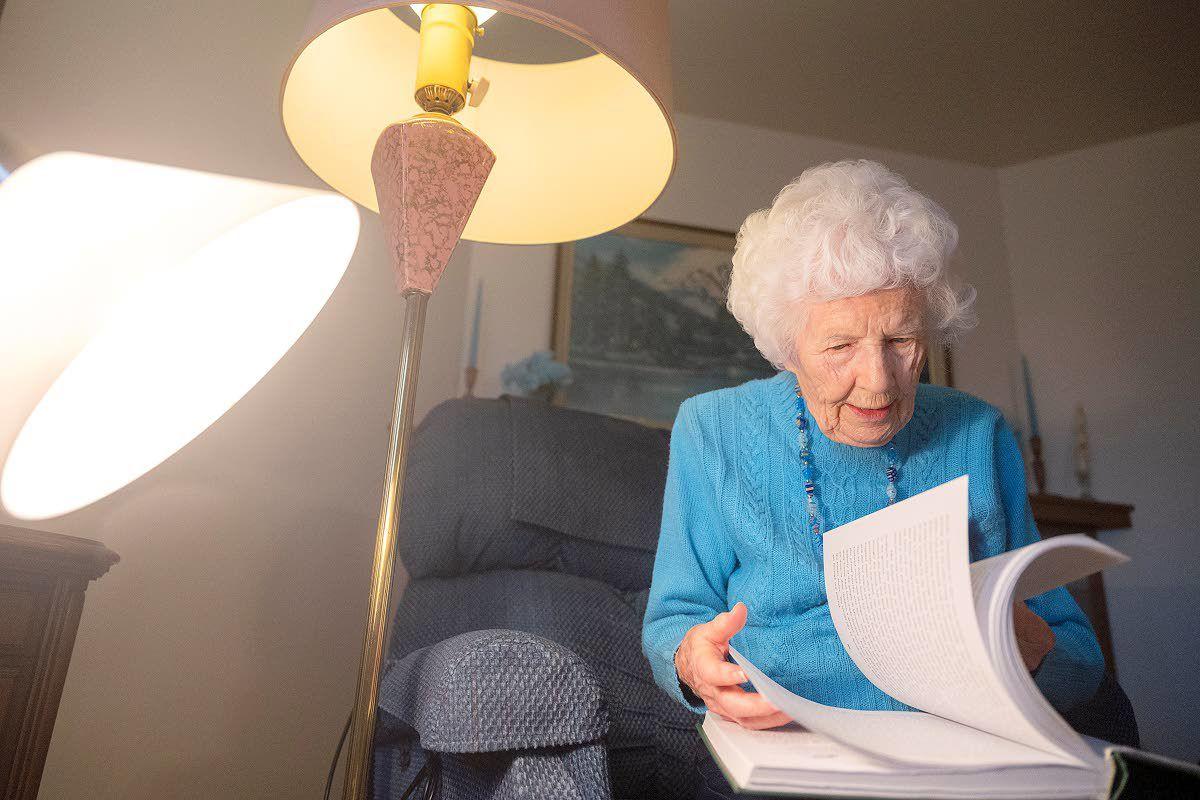 Helen Yenney, who recently celebrated her 100th birthday, flips through a book of her family’s history while sitting in a chair at her home in Lewiston on Tuesday afternoon. 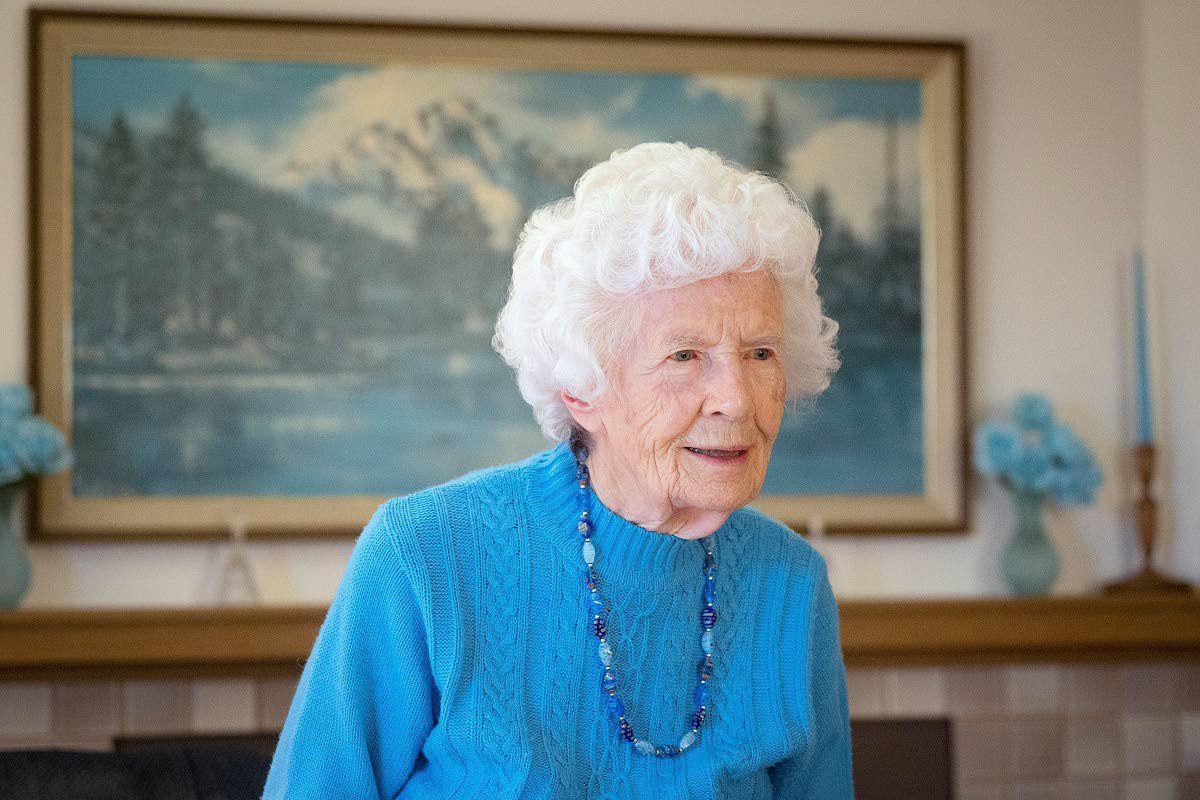 Helen Yenney stands inside her living room to show some of the pictures from her 100th birthday celebration at her home in Lewiston. 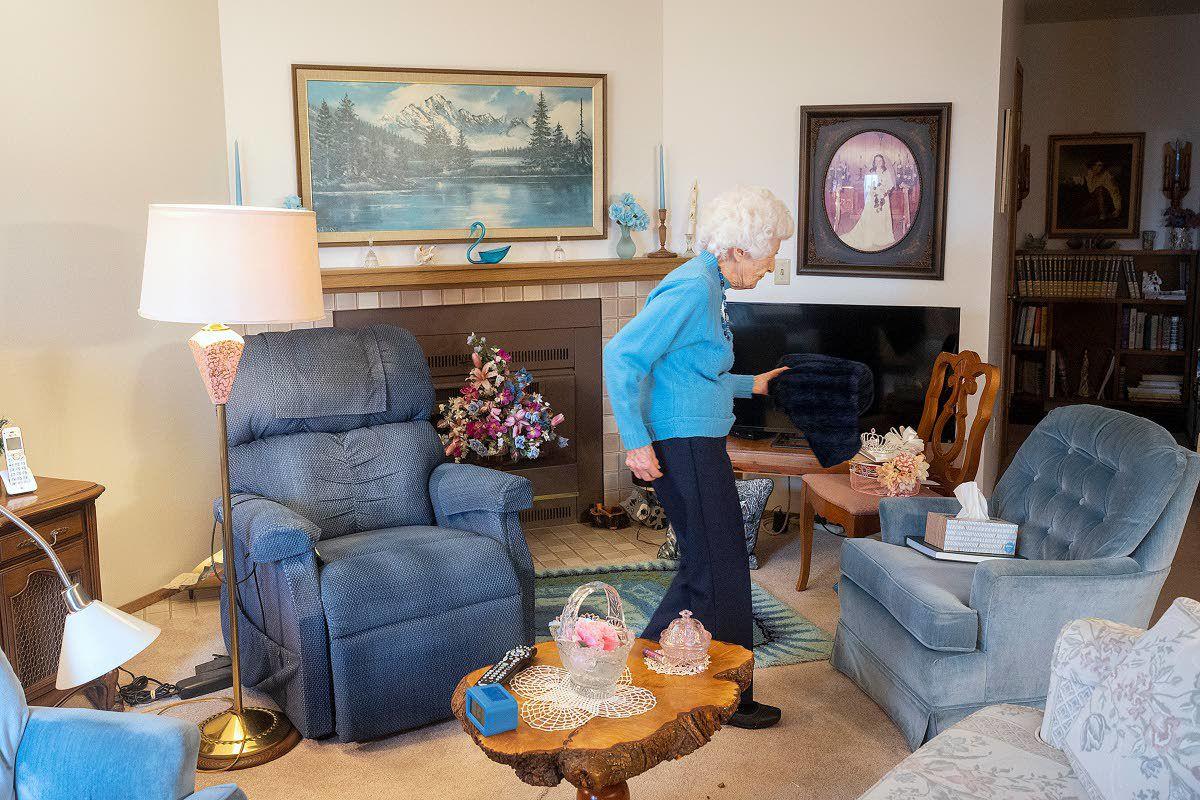 Helen Yenney, who recently turned 100, walks around the living room of her home in Lewiston on Tuesday afternoon.

Helen Yenney, who recently celebrated her 100th birthday, flips through a book of her family’s history while sitting in a chair at her home in Lewiston on Tuesday afternoon.

Helen Yenney stands inside her living room to show some of the pictures from her 100th birthday celebration at her home in Lewiston.

Helen Yenney, who recently turned 100, walks around the living room of her home in Lewiston on Tuesday afternoon.

Even though she was born on Halloween in 1919, every day is Independence Day for Helen Yenney.

The centenarian is almost completely blind, but still lives on her own in the Lewiston condominium she’s called home since 1992. She does almost all her own cooking, ceding only her shopping and cleaning duties to some hired help that stops by a few times per week. Her voice is strong, and so is her hearing.

“We’re pretty independent,” Yenney said of her family, which moved to a Kooskia-area farm after her grandparents homesteaded in South Dakota. “You see, we grew up during the Depression. There were nine of us brothers and sisters all together. And it was hard times.”

The adversities that strengthened Yenney’s mettle were many. As a child, the future teacher loved school so much that she had no qualms about walking a mile and a half each way to her tiny country schoolhouse. By the time she started attending Kooskia High School, the distance was 10 miles.

She and her older brother made the long trek home on Friday nights after spending the week at their grandmother Emily Richardson’s home in Kooskia. Then they would turn around and walk back to Grandma’s house Sunday night for the next week of school.

And as the second oldest child in the family and the oldest female, much of the task of raising the younger children fell to Yenney. She said that duty was another factor in her longevity.

“I was more or less the second mother in our family,” she said. “My mother was sick a lot, and of course she was always pregnant.”

Her younger brother, Verl Tweedy, who ran a barbershop on Lewiston’s Main Street for more than 50 years, tried to kid her about it once in front of his customers.

“He would introduce me as his second mother,” Yenney said. “I’d tell him, ‘How can I be your second mother? I’m only seven years older than you are.’ He always had something funny to say, but he didn’t say a word that day. His face just dropped. It was so funny.”

But even though life was hard, Yenney leavens her stories with plenty of silver linings that make life in Clearwater River country sound downright romantic.

“Sometimes we’d ride a horse to school and get out afterwards and run a race,” she said. “We had fun. And instead of having things like gyms that they have now, we’d go down to the barn where the kids put their horses and go upstairs where the hayloft was. That was our gym. We played games up there.”

As Yenney grew to love school, she also grew to love reading, especially history. She and her husband, Julius, had such a passion for education that they were teachers for nearly half a century. But a few years after Julius died in 1989, she was afflicted with a condition called giant cell arteritis. It restricted blood flow to parts of her body like her optic nerves, robbing her of most of her sight.

But Yenney was once again able to tap the deep well of resourcefulness that was instilled by her upbringing. Her grandfather, Seth Richardson — the one who homesteaded in South Dakota before the move to Idaho — lost his vision in his early 20s. And his ability to cope almost effortlessly with the disability inspired Yenney to take her own vision loss in stride.

“All those years I could see him take his cane, go to the store, get groceries, make change and go home with his eggs and things,” she said. “He never spilled a thing. That impressed me. My brothers would take him out to the barn and he’d harness horses for you. He never thought a thing about it.”

She learned that Grandpa Richardson was a bit of a legend for homesteading while blind when she visited South Dakota to research a book of family history. So she realized that if he could do it, so could she. That streak of independence has endured over the past few years. In fact, it’s so strong that the people who do lend her a hand from time to time have to occasionally lay down the law. For instance, the Dial-A-Ride driver she relies on for transportation finally insisted that she use a cane when she’s on board.

Dozens of members of her extended family recently descended on Lewiston to celebrate Yenney’s century, packing into a birthday party at the Clarkston Quality Inn. They came from as far away as Georgia and Texas, and included her lone surviving sibling, 86-year-old Ethel Jones.

“People say I’m healthy, but I’ve had some really bad times, too,” Yenney said reflectively, noting her bad back and vision problems. “But the thing to do is just keep going. We grew up working, and we didn’t have a lot of things that people have today. But we had a lot of good things that they don’t have today.”

One of those things is simple courtesy, like showing up on time for work and appointments, she said.

“When I was teaching school, I’d be there building my fire at 7 o’clock in the morning,” she said. “You had to. You had those old big-bellied stoves, and you had to get the school room warm. I don’t feel like I’m 100 years old, but I do feel like I’ve walked through 100 years of history.”