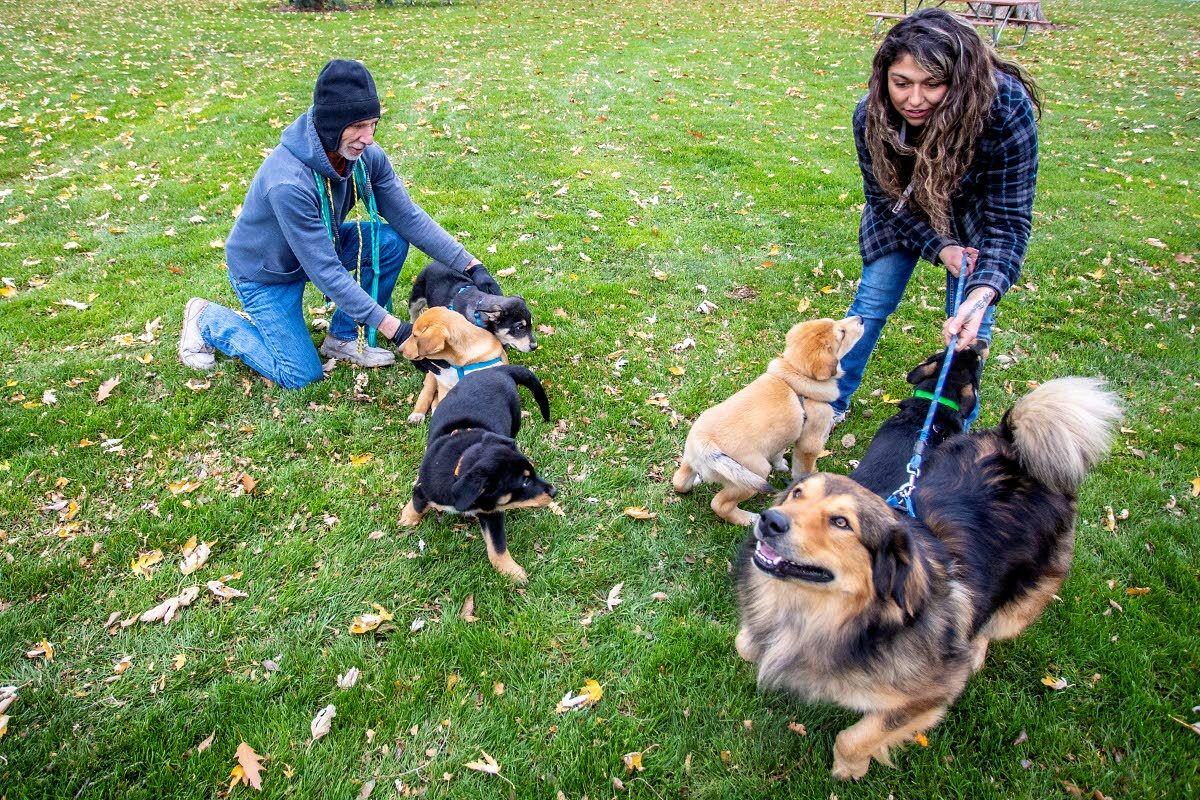 Duke Tannahill and Veronica Greive work to wrangle together their five puppies, JR, MX, KX, DR and YZ, along with their adult dog, Tuff, at Lewiston’s Pioneer Park last week. The couple was devastated at the loss of their other two adult dogs earlier this fall, but the puppies’ presence has helped them cope. 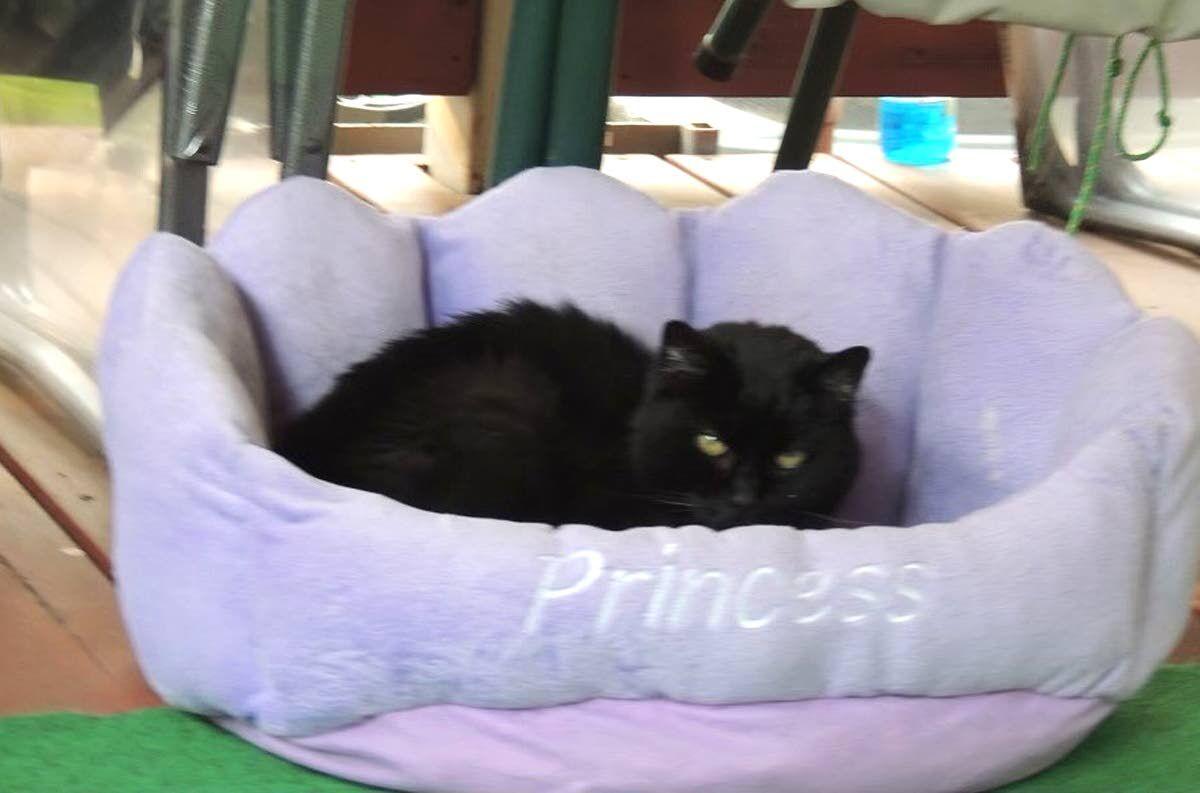 At 21 years, 7 months, Princess reigns as the oldest known cat in Lewiston. 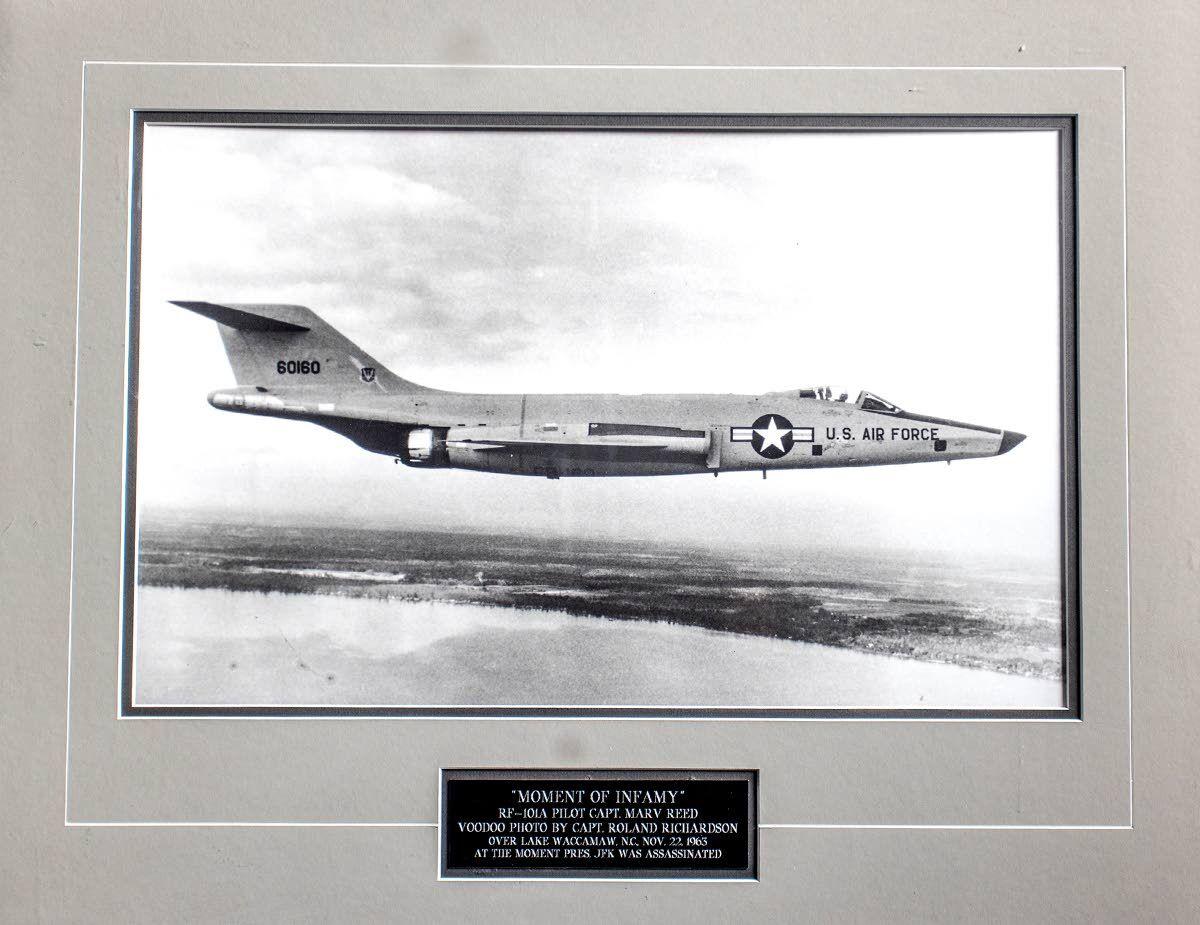 Marv Reed is pictured flying in an RF-101 over Lake Waccamaw in North Carolina, as about the same time President John F. Kennedy was assassinated in Dallas on Nov. 22, 1963. 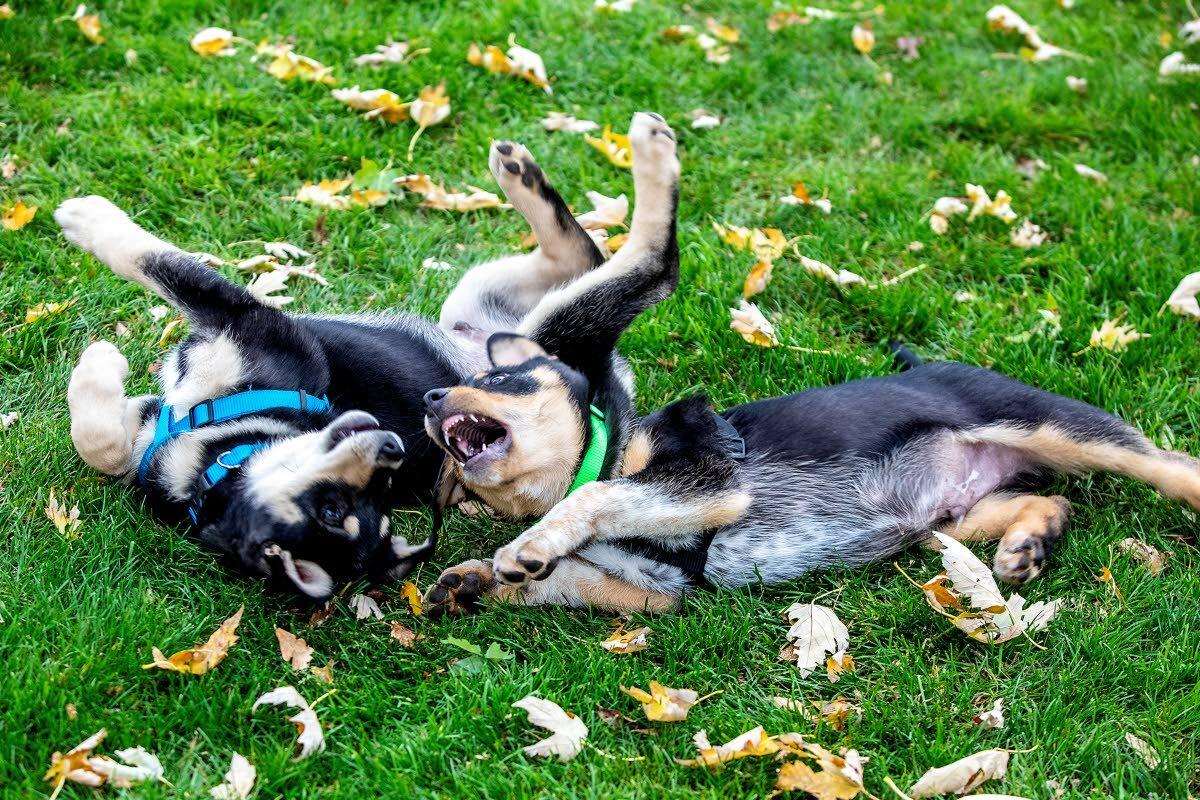 Two of Duke Tannahill and Veronica Greive's puppies play with each other at Pioneer Park last week. 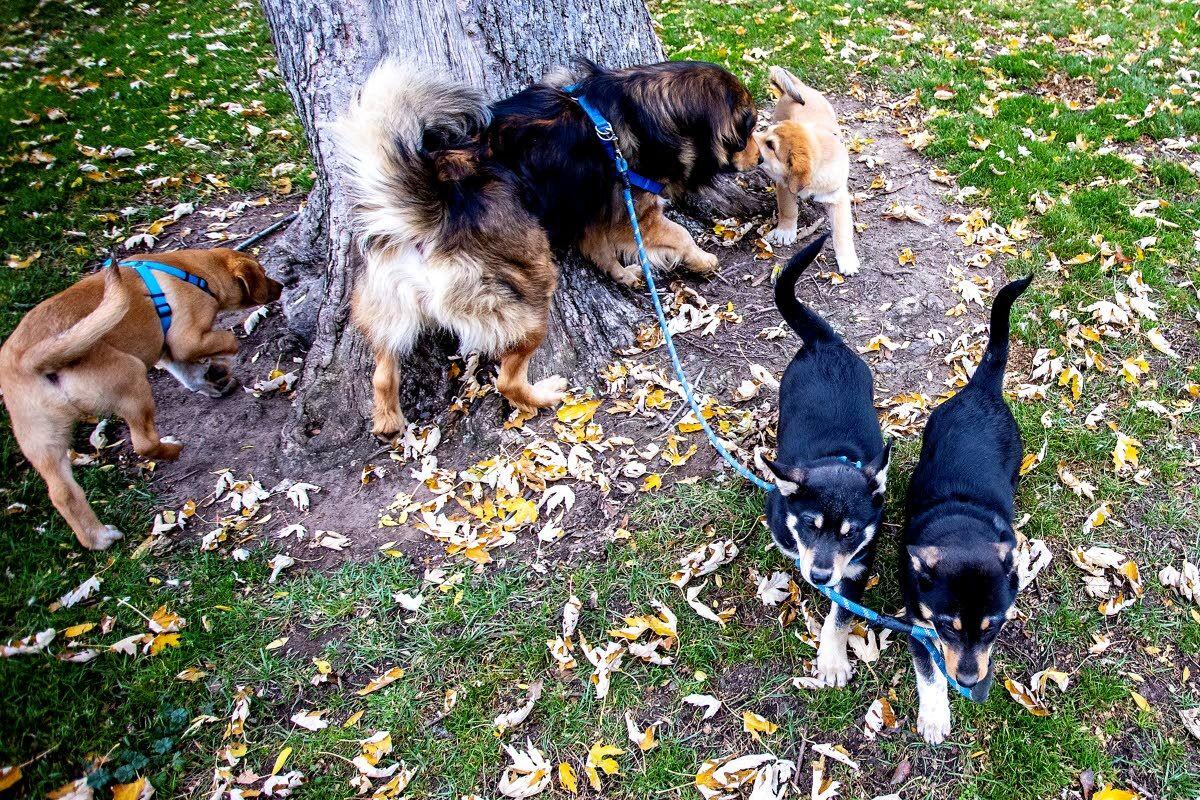 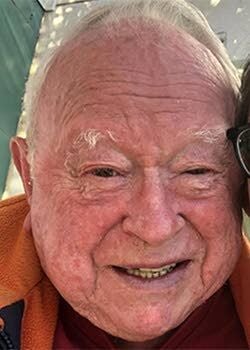 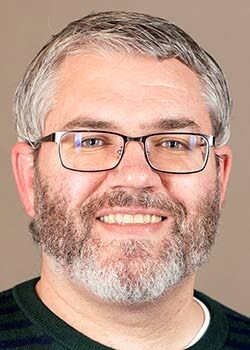 Duke Tannahill and Veronica Greive work to wrangle together their five puppies, JR, MX, KX, DR and YZ, along with their adult dog, Tuff, at Lewiston’s Pioneer Park last week. The couple was devastated at the loss of their other two adult dogs earlier this fall, but the puppies’ presence has helped them cope.

At 21 years, 7 months, Princess reigns as the oldest known cat in Lewiston.

Marv Reed is pictured flying in an RF-101 over Lake Waccamaw in North Carolina, as about the same time President John F. Kennedy was assassinated in Dallas on Nov. 22, 1963.

Two of Duke Tannahill and Veronica Greive's puppies play with each other at Pioneer Park last week.

Lewiston couple Duke Tannahill and Veronica Grieve will tell you there is a lot of rollicking play, nighttime potty sessions and struggles to keep tabs on all of them.

So would they recommend having five puppies?

“Yeah, actually, I would,” Tannahill said. “They keep you on your toes; they keep you busy.”

The last three months have been busy, heart-wrenching and joyful for Tannahill and Grieve. It started Sept. 1, when their dog Akita had a litter of eight puppies.

The couple intended to adopt out all of the puppies, but things changed when Akita and one of their two male dogs, Jack, went missing. Tannahill and Grieve spent a weekend combing the area around their 27-acre property on the Lewiston Hill for the dogs, and even went to Walmart to buy a drone to aid in their search. But before they could make their purchase, they got a call: It was an officer telling them Akita and Jack had been shot and killed while prowling around some chickens.

The couple aren’t exactly sure how the incident played out, but were devastated by the news.

At first, Tannahill said he wanted to send the puppies away. (“I was mad at the world,” he said.) But soon their presence became a happy reminder of Akita and Jack, who were their parents.

Actually, the puppies’ parentage is a bit more complicated than that. Some of the pups bear a resemblance to Tuff, the couple’s only surviving adult dog. And even though Akita gave birth to all eight puppies at once, it’s possible there was more than one father, Tannahill said.

“We looked it up and talked to our vet about it,” he said. “We haven’t done a DNA test yet, but we’re going to.”

Three of the puppies were given away to family or acquaintances, and the rest stayed with Tannahill and Grieve. They have named them after types of motorcycles — JR, MX, KX, DR and YZ.

The couple own a drywall business, and the puppies often come with them on their jobs. Of course, they can sometimes be a handful.

“They’re at their most rambunctious when they’re together,” Grieve said. “But when we take them out singly, they’re little angels.”

On more than one occasion on the pages of the Tribune, I’ve proclaimed my family’s pet, Eleanor, the oldest cat in Lewiston — and done so without any proof.

Well, it turns out there is at least one cat in town who is older. Princess, who lives with retired Lewiston couple Ed and Vivian Jasinski, was born April 24, 2000, which makes her 21 years, 7 months old — about five months older than Eleanor.

Princess was purchased at Garden Square Nursery — a well-loved and long-since-closed pet and plant store in North Lewiston — in June 2000 by the Jasinskis’ daughter Holly, who at the time had recently graduated from Lewiston High. Ed and Vivian had made it clear they didn’t want any more pets in their house, so Holly hid the kitten in her room — which worked well until Vivian heard a muted meow from the bedroom one day.

Despite their rule about no more pets, Ed and Vivian quickly accepted Princess into their home. A similar thing happened a few years later when Buddy the basset hound came to live with them.

“And once they’re in the house, they’re pretty secure, because you just worry about if someone is going to take care of them,” Ed Jasinski said. “... You just can’t (turn away) an animal.”

The children have all moved out and Buddy died earlier this year, but Princess remains.

Ed Jasinski said the family’s cat is “really doing well.” She had a bladder infection that now seems gone, but may also have kidney disease, for which the family is seeking treatment.

Princess can still dart up stairs and jump onto window sills, but does have trouble grooming herself, which has led to her black fur occasionally being matted. The Jasinskis have had her shaved twice, which seems to work wonders.

“She was just like a new cat,” Ed said. “She didn’t have the mat, and her hair came back, just like she was a kitten again. It just added all kinds of energy to her.”

Princess usually stays inside, but will occasionally lounge on her family’s deck on sunny days. She is shy around strangers and won’t come near house guests until they’ve been around for a few days.

“She’s a cautious cat — she doesn’t go out looking for trouble,” Ed said. “Maybe that has something to do with some of her longevity.”

Marv Reed, of Orofino, can vividly recall several tales from his quarter-century as a pilot in the Air Force — though one of those moments probably seemed forgettable when it happened.

Reed, now 91, was serving as the administrator on a check flight for his comrade, Capt. Roland Richardson, as they departed from Shaw Air Force Base in South Carolina and flew over North Carolina. The men were reconnaissance pilots flying RF-101 jets. The date was Nov. 22, 1963.

Richardson’s task was to take photos of targets on the ground in a yearly test of his skills, with Reed following. Once the test was complete, Richardson called Reed on the radio and told him to fly beside him so he could take Reed’s picture. Richardson snapped the picture with a camera mounted on the left side of his plane, and it shows Reed flying about 3,000 feet above Lake Waccamaw in North Carolina.

When the men landed back at Shaw Air Force Base, they discovered that “all hell had broke loose on the ground there,” Reed said last week.

Reed and Richardson were soon informed that President John F. Kennedy had been assassinated in Dallas. Later, Reed realized the shooting had happened at about the same time he had gotten his picture taken.

The picture is now framed and captioned, and hangs in the den of his Orofino home. The retired lieutenant colonel, whose 3,000 hours flying the RF-101 is more than anyone alive, has many other mementos from his career. But when it comes to that photo from Nov. 22, 1963, “the circumstances are just phenomenal,” Reed said.

Bite Size Takes, which runs periodically in the Tribune, scoops up the news that almost didn't fit in print. If you have an offbeat but interesting tip you would like to share, contact Matt Baney, the Tribune's city editor, at mbaney@lmtribune.com or (208) 848-2262, or on Twitter @MattBaney_Trib.