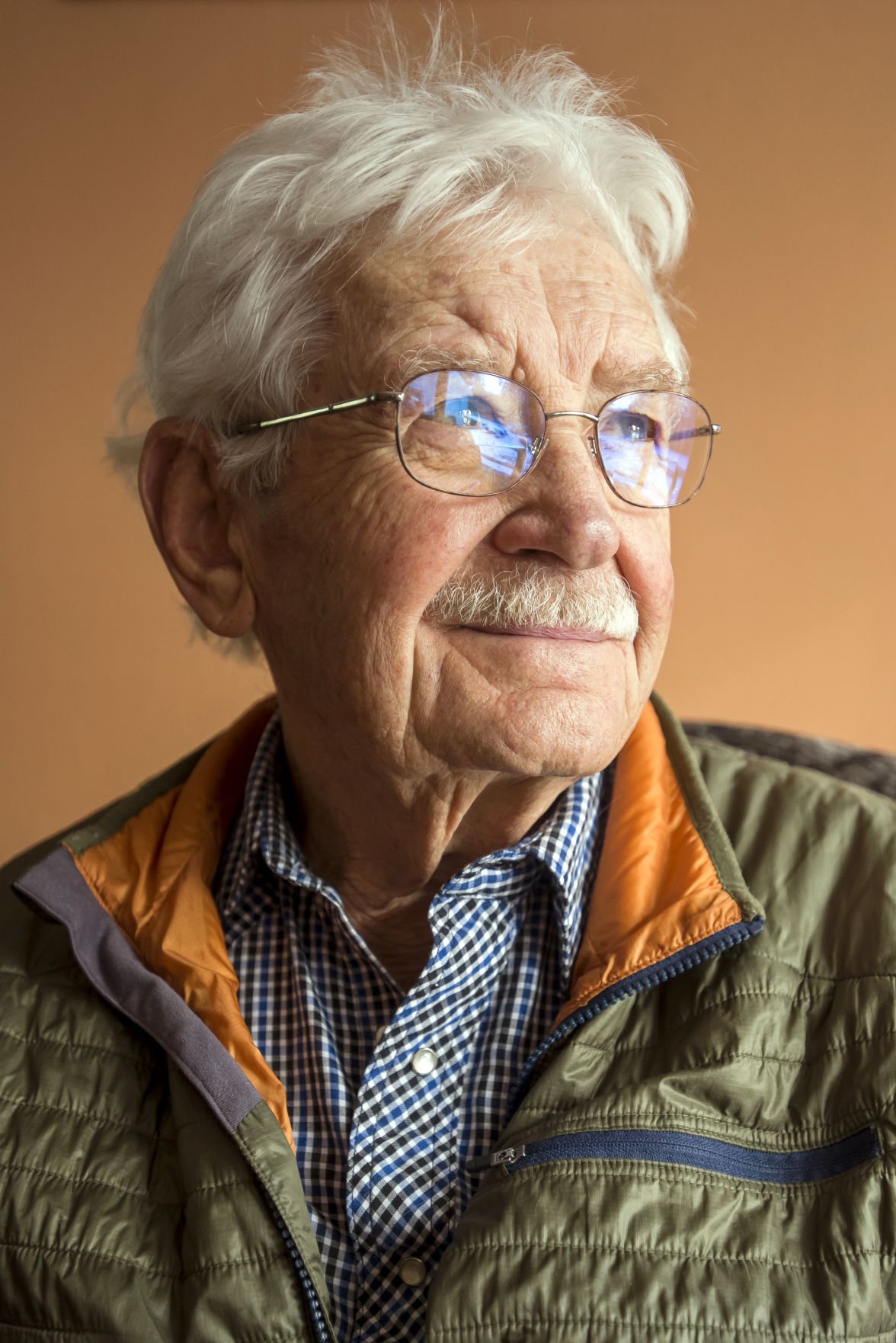 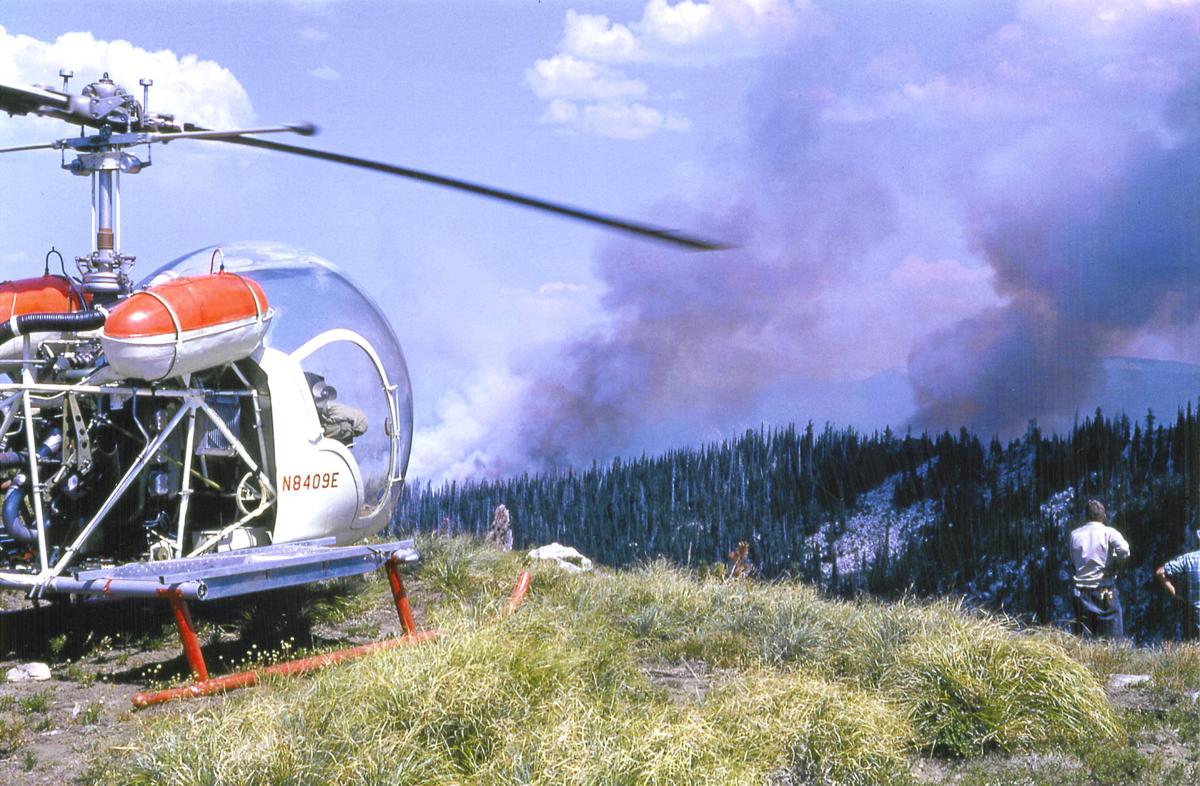 Helicopter pilot Rod Snider, flying a Bell 47 G-3 single-engine light helicopter, ignored a radio message to return to Boise where his wife was having a baby, continuing to search for the missing firefighters. He finally spotted the crew's bright orange shirts through a hole in the smoke.

Helicopter pilot Rod Snider, flying a Bell 47 G-3 single-engine light helicopter, ignored a radio message to return to Boise where his wife was having a baby, continuing to search for the missing firefighters. He finally spotted the crew's bright orange shirts through a hole in the smoke.

GRANGEVILLE — It was Aug. 4, 1961; a bright, sunny day during a record-setting year for wildfires throughout the Western states.

Thomas J. Kovalicky, who would later become the supervisor of the Nez Perce National Forest, was a rookie smokejumper stationed at the Missoula, Mont., smokejumper base when a call came in to alert the crew about a fire start at Higgins Ridge, east of the Moose Creek Ranger Station.

Little did the crew know it would become one of the most harrowing days of their lives.

“It was a routine day in terms of getting the call to go on a fire, and they took 20 of us from the Missoula base,” Kovalicky, now 85 and residing in Grangeville, recalled.

“It was a pretty nice day, really. It was not blustery, not windy.”

What the team did not know at the time was a cold front had been moving inland from the coast. Low-pressure systems have an unpredictable influence on fire behavior.

“And for some reason we didn’t have a radio,” Kovalicky said. “We were so busy that summer we ran out of everything, and we didn’t jump with radio communication (equipment). We used crepe paper signals that we would put on the ground that indicated everybody was OK from the jump.”

After the firefighters landed, the plane made an extra pass to drop all their tools and personal gear, and the team began from an anchor point below the fire digging a trench that would stop the spread of flames. After about an hour of digging, the fire boss, Fritz Wolfrum, told Kovalicky to go back to the anchor point for a look around and come back to report.

“So I went back there, and it was about 150 yards away, and I got back there and all of a sudden the wind started picking up, and that meant the cold front was starting to do its thing,” he said.

“And I couldn’t believe what happened to me next. I was just standing there looking at the fire jumping around, and all of a sudden the whole world just turned into a globe of fire. The fire just exploded. It had been warming up the gases and the sap inside the trees, and when that happens, those trees will explode. And I had enough experience to know that was not a normal situation.”

Kovalicky put his head down and pulled a kerchief over his face.

“I got myself as prepared as I could, and I ran through that wall of fire to get back to where the crew was. And when I got back there, I told Fritz what happened, and he immediately told everybody to — he said: ‘Drop your tools, grab whatever you can in the way of water and let’s get the hell out of here.’ ”

Kovalicky said he, Wolfrum and most of the other smokejumpers were thinking about a wildfire disaster that had happened 12 years earlier on the Mann Gulch Fire in the Helena National Forest in Montana.

On Aug. 5, 1949, a team of 15 smokejumpers and one ground crew member parachuted into the Mann Gulch area along the upper Missouri River and began fighting the fire. Unexpected high winds whipped the flames out of control and cut off the firefighters’ escape route, cornering them and killing 13 of the 16 men involved.

“That was running through our minds about, ‘Holy smokers — that’s what happened to those guys, and they didn’t make it,’ ” Kovalicky said.

As the smokejumpers’ plane was circling Higgins Ridge preparing for the drop-off, Kovalicky said they had spotted a rock pile toward the top of the ridge that had very little vegetation. That’s where Wolfrum, the fire boss, ordered his crew to run when the conflagration blew up.

“We started carrying our water and ourselves — no tools, nothing to slow us down, and got up to the top of the hill, and then all hell broke loose.

“The winds came roaring down there about 60 miles an hour, which is a lot of wind for a fire, and things just went to hell on us. Trees were exploding and falling down and crashing, and we kept looking for a safe spot to stay away from the falling trees.”

Kovalicky said the men took off their T-shirts and soaked them in water then laid down on the ground and scooped out a shallow hole for their heads. They covered their faces in the wet T-shirts and lay face down in the dirt.

“Because even in a forest fire, there’s oxygen in the soil at that low level like that,” he said. “And if you pick your head up, you get hit with hot air, and that’s what kills you.”

Kovalicky and another smokejumper, Neil Walstad, were lying head-to-foot so they could keep an eye on each other’s legs and brush off sparks as they landed on the men’s jeans.

“We were starting to experience burning of our clothing and our hair below our hard hats,” Kovalicky said. “We all had gloves, luckily, but what really saved us in the long run: That was the first year they came out with the fireproof (Nomex) shirts. They were bright orange, not yellow, and we were all wearing them because we were the first group to have them that year.

“Our bodies from the waist up were protected with long sleeves and Nomex and gloves, and we were on the ground and we were trying to keep ourselves as wet as possible. We ran out of water eventually, and it got to be where we didn’t think we were going to make it. Guys were starting to get a little worried about not having enough oxygen and two guys tried to get up and walk away from the fire, and Fritz said ‘Grab them and get those guys back here,’ which we did.”

Kovalicky said when the fire brands from the trees landed on them it would set their jeans on fire.

“But you don’t know half the time that the fire is burning you. Sooner or later you will, but for awhile when that fire brand hits you, it’s just a weight. You can’t feel anything.

“So I nudged Neil and I said: 'You remember how that Hail Mary thing goes?’ ”

Meanwhile a helicopter pilot named Rod Snider, flying a Bell 47 G-3 single-engine light helicopter, had been looking for the stranded firefighters. He’d searched for about an hour when his supervisors radioed him to pull back and return to Boise where his wife was having a baby.

Snider ignored the orders and continued to search, finally locating a hole in the thick smoke where he spotted a group of bright orange shirts lying on the ground at the top of the ridge.

“We were lying there for about an hour trying to figure out what our options were,” Kovalicky said, “and all of a sudden we heard this roar, and I thought it was trees going to hit us. And it was the helicopter pilot who refused to give up looking for us.”

Snider also had been trained as a smokejumper and was familiar with the tactics such a team would take in a situation like Higgins Ridge. He found a spot near the rock pile where he could momentarily land and yelled at the men to load their most seriously injured people in the helicopter.

He flew out the first load and deposited them in a safe place nearby, then returned to pick up the rest of the crew. The small helicopter was built for only one person inside, and two more could lie in baskets perched atop the runners on either side.

Snider crammed one more person inside the pilot’s bubble with him and put two firefighters in each basket until the entire team had been evacuated.

Kovalicky, Walstad and Wolfrum were the last to be rescued.

“We didn’t have time to do anything but jump in the basket and lay there with no straps or anything, and we figured, ‘Oh, God, we’re going to roll out of the basket and have another problem.’ (Snider) did this for the better part of an hour until he got us all off that fire. Why that helicopter didn’t explode and blow up, I’ll never know.”

The smokejumpers were taken to a hospital and cleaned up — no serious injuries were reported — and then returned to their base where they were fed “all the T-bones we wanted — 1 inch thick; 2 inches thick.”

Then, the next morning, all the men were put back on the jump list.

It was a psychological thing, Kovalicky said.

“We were at that age where we looked at each other after we were through eating and had a couple of beers and said: ‘Well, what the hell are we going to do tomorrow?’ ”

In August, 11 of the remaining 20 smokejumpers met at Missoula for a reunion and talked about their experience. Kovalicky said several of the men admitted they thought they were going to die that day on Higgins Ridge.

In 1976, the United States resurrected an award for heroism on wildfires that had been suspended during World War II. Kovalicky wrote a nomination for Snider, and he was given the American Forest Fire medal, which is reserved for heroism of the highest order. But in August during the reunion, Snider insisted: “I’m not a hero. Proud I did it.”

The next summer, Kovalicky left the smokejumper program and was hired as a full-time forester for the U.S. Forest Service in Pine Dale, Wyo. He went on to a distinguished career in the agency, ending up from 1982-91 as supervisor of the Nez Perce National Forest based at Grangeville.

That experience on Higgins Ridge, however, left an enduring impact on him personally and colored the way he viewed his job and the advice he gave to his employees from then on.

Often when he would work on a fire, Kovalicky said he would get a sense of being trapped, even if he literally wasn’t in danger.

“I would tell people that dying on a forest fire is not worth it,” Kovalicky said. “That you should refuse if you feel uncomfortable on any assignment you’re given on a fire or that you feel jeopardized by. I said, ‘I want you to walk away from it. With no penalty. Just say, “This is not for me.” ‘

“And I followed that pretty much.”