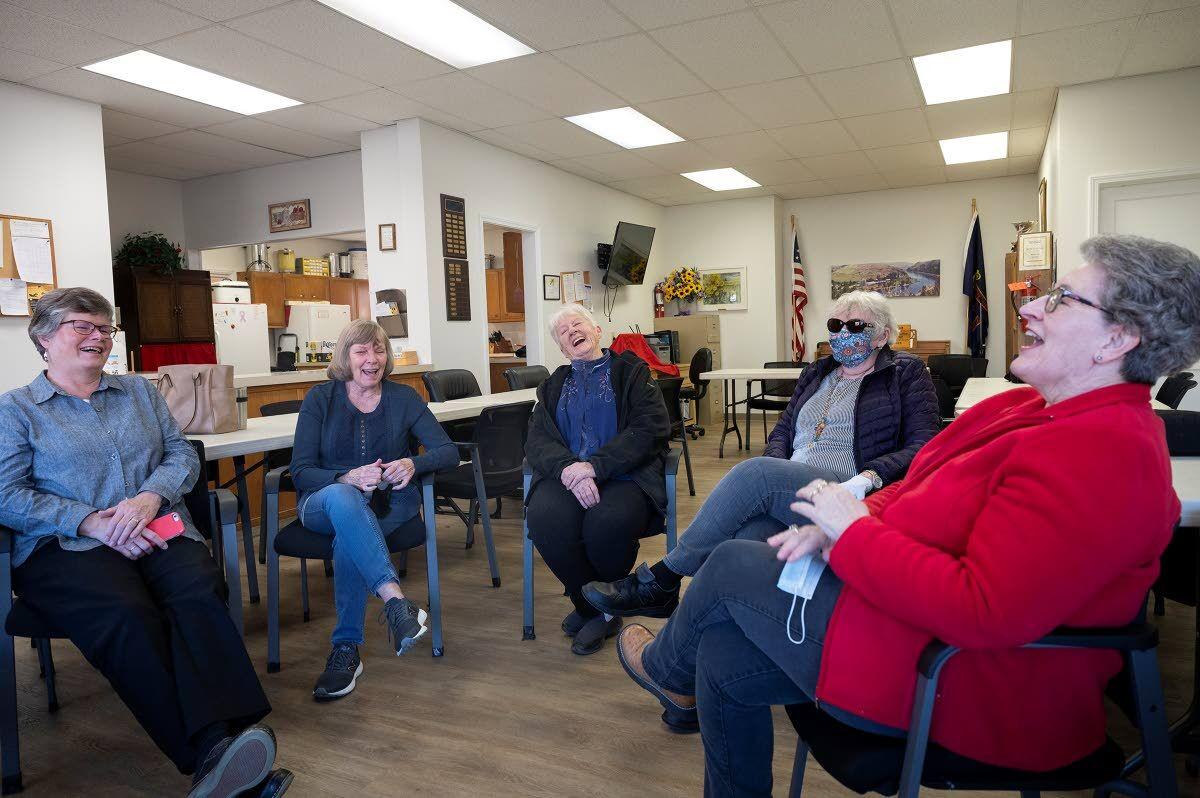 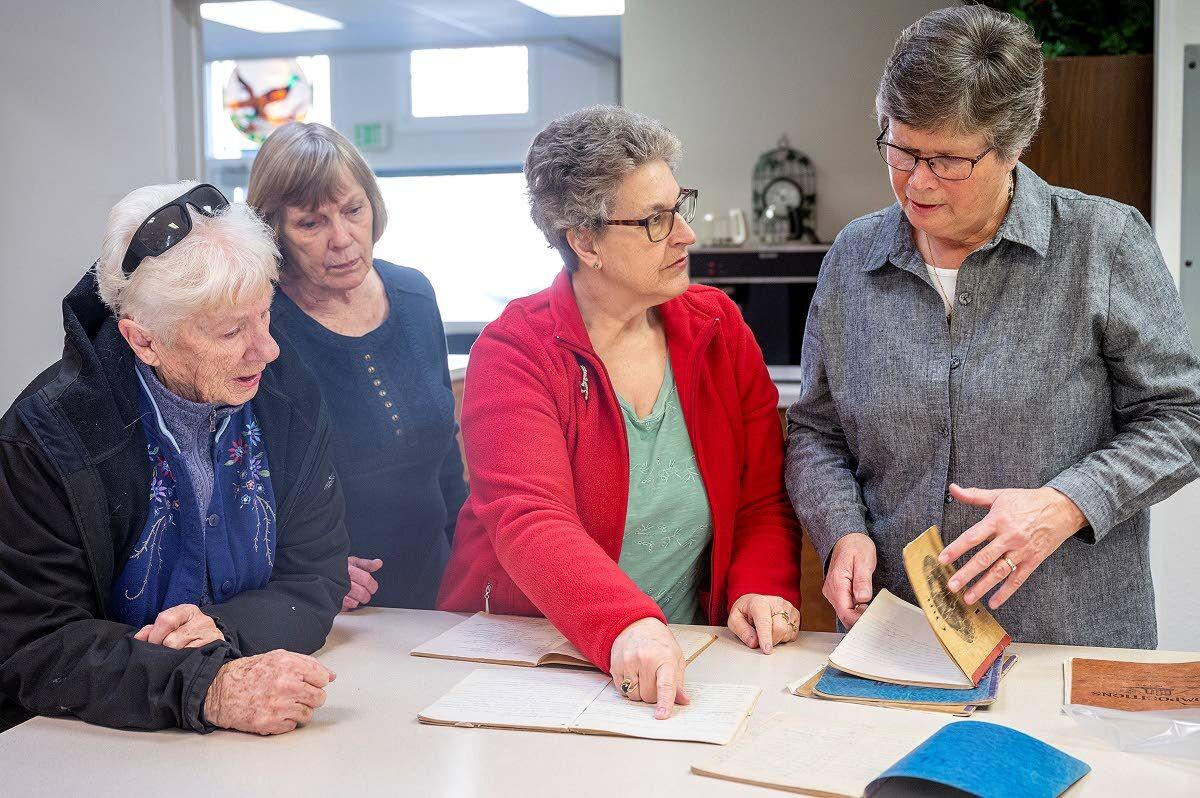 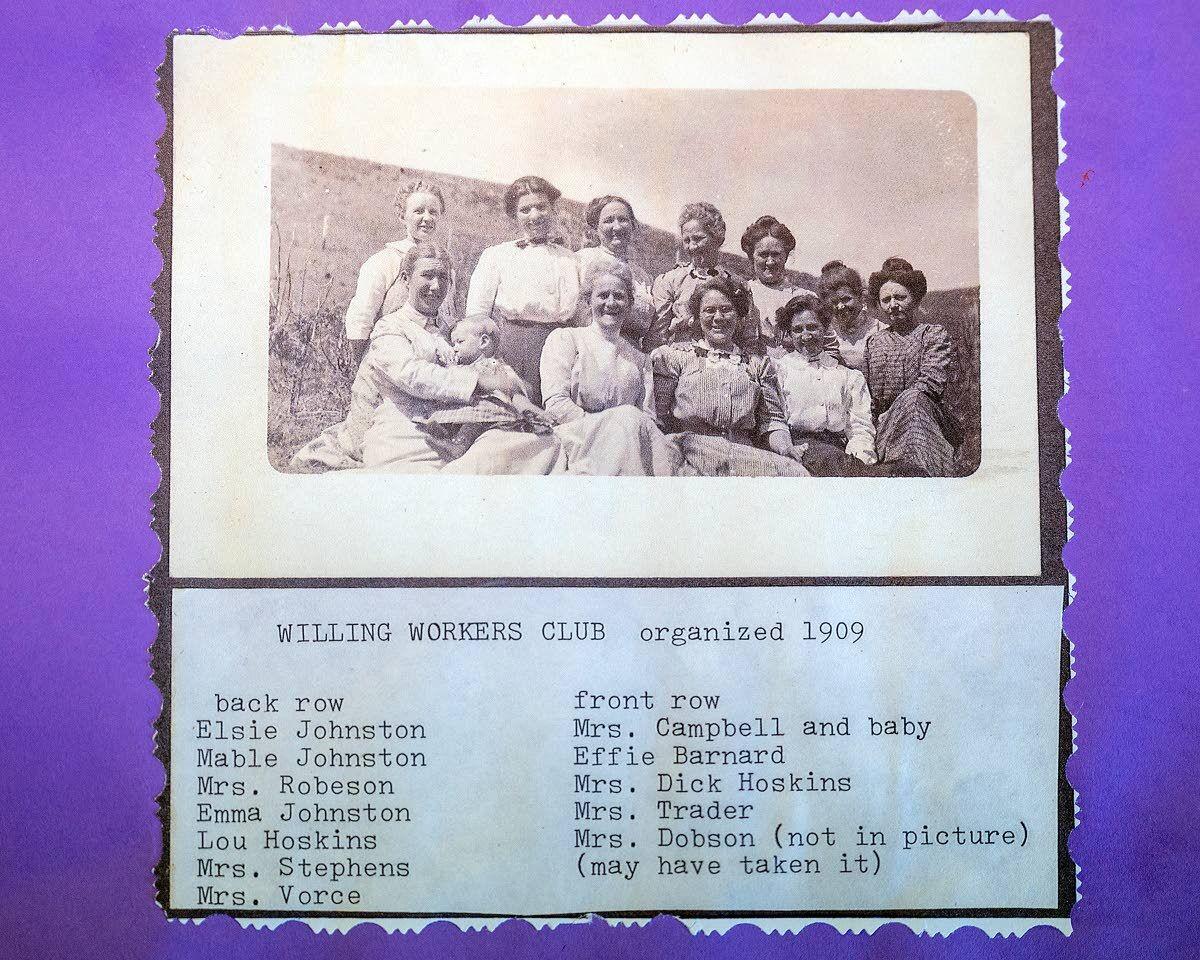 A historical photo showing the original members of the Willing Worker Club in Lenore is seen in a scrapbook club members keep at the Lenore Community Center. 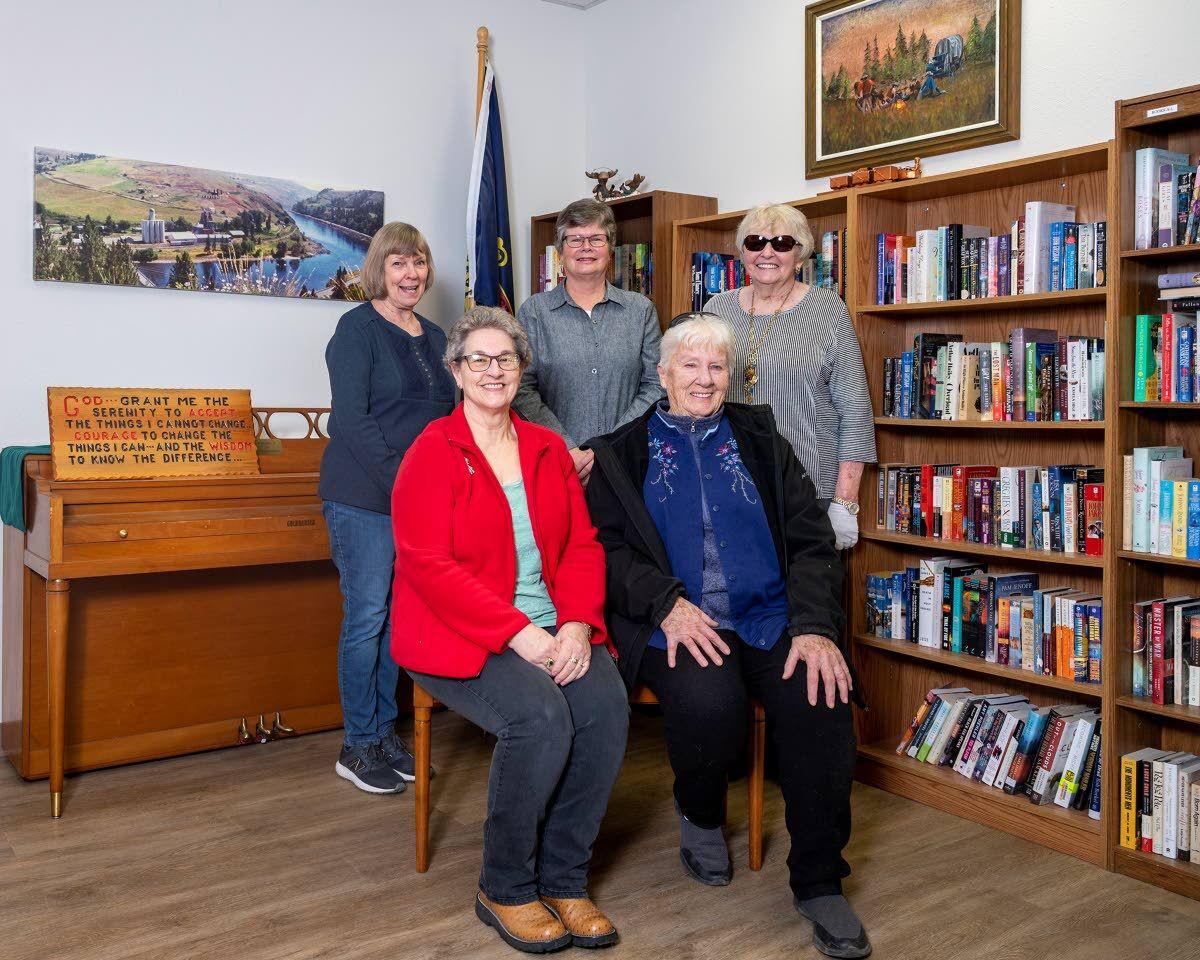 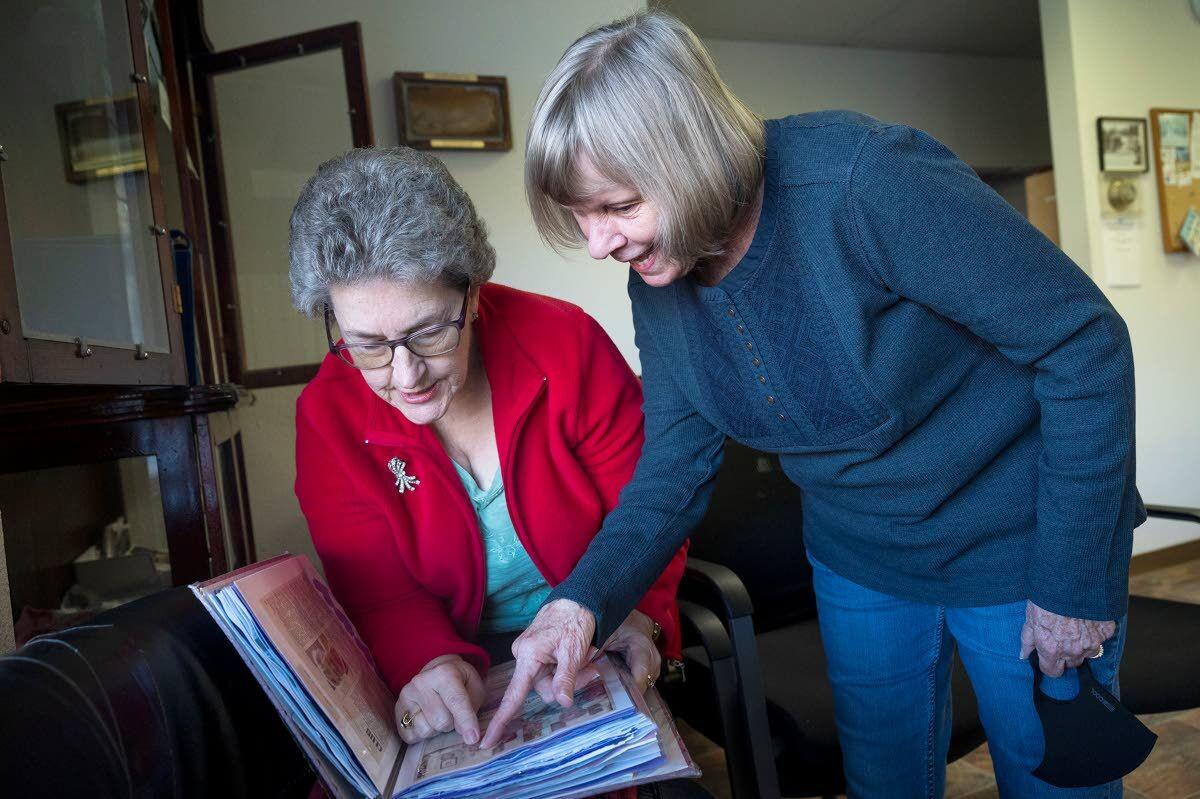 Carla Freeman (left) and Diane Barton smile as they look through a Willing Workers Club scrapbook at the Lenore Community Center on Thursday.

A historical photo showing the original members of the Willing Worker Club in Lenore is seen in a scrapbook club members keep at the Lenore Community Center.

Carla Freeman (left) and Diane Barton smile as they look through a Willing Workers Club scrapbook at the Lenore Community Center on Thursday.

LENORE — The ladies of the Willing Workers Club of Lenore claim theirs is the oldest continuous volunteer ladies club in Idaho.

There’s no official proof of that, but nobody has disputed them.

After nearly 112 years, however, the remaining members of the longtime organization have decided it’s time to call it quits.

“We’re all getting older and not getting new members, and it makes it harder for the old members to do what we have to do,” said Diane Barton, 69.

“It’s been a really fun group to be in. We’re good friends,” she added. “We’ve done some good things for the community, but it’s been hard to recruit new members. It’s all us old people. And it’s just been harder to keep it going.”

The fate of the Willing Workers is similar to so many other volunteer community and service organizations throughout the country that thrived during the 20th century but have found it difficult to find younger people to take over the reins.

According to a 2018 study by the U.S. Bureau of Labor Statistics, volunteer hours in the country reached record numbers in 2014 and charitable dollars peaked in 2017 at $410 billion. At the same time, the percentage of Americans who volunteer and donate to charitable organizations has steeply declined along with participation in volunteer service groups.

When the Willing Workers Club first organized in April 1909, the women who made up the organization lived all along the Clearwater River corridor, on the north face of the river and south toward Gifford on the Camas Prairie.

Club members would congregate at a host’s home “and the one thing they asked you, ‘Do you have any mending to do?’ ” said Marylou Cook, 86, a member of the club for 65 years. “They would actually iron and during World War II they made bandages. They’ve always been very good to help. Some people didn’t have much and it didn’t make a bit of difference. We went and everybody enjoyed it.”

One of the charter responsibilities of the Willing Workers Club was to provide memorial dinners for the families of people who had died.

Some of these dinners became huge affairs — one brought about 150 people packed into the tiny Lenore Community Center along U.S. Highway 12 that normally holds about 50.

“We serve the dinner, we supply all the food and we serve all the food; do all the clean up, all the cooking, all the serving,” said Carla Freeman, 68. “Any food left over goes back to the family. And we’ve been doing that forever.”

Club members frequently have put in long hours preparing for these feasts. And that was a major driver in the decision to disband the club.

“We’re all too old to stand all day,” said Barbara Sinclair, 79. “We’re looking at 14-hour days with four or five people in their 60s or older and a lot of people (want to help) but they’re disabled.”

Fundraisers were held to supply the money the club used to buy the meat and beverages for the memorial dinners and other activities. In the early years, club members sold pie and coffee at local auctions and other events. Each year, they made cherry chocolates to sell at the Christmas bazaar. Freeman said the club usually operated on a $1,000-a-year budget.

Club members also pitch in $1 a year in membership fees, as well as 25 cents per meeting that all goes into the kitty.

But the dinners were only one facet of the club’s mission.

Freeman recalled a man in the community who had recently lost his wife. When Cook inquired whether he needed help, he asked that his deceased wife’s flower garden be tended.

Club members showed up at this house early one morning “and we pulled weeds, mowed, pruned, planted flowers. We did everything in his yard until about three or four in the afternoon and he was in tears before we left,” Freeman said.

The club also has sponsored yearly scholarships of as much as $500 to students in the area. Cook recalled one young woman whose husband had died. She decided to return to school to study nursing and the club awarded her a scholarship to help with expenses.

“She got a couple hundred dollars, but it was important money,” Cook said.

Perhaps even more important were the bonds that grew between the women who have belonged to the club over the years. Meetings rarely started on time because everyone was so happy to see each other and catch up on all the latest news.

“We have a meeting which is interrupted every third word or something,” Barton said.

The Lenore club also formed friendships with the Peck ladies club down the road. Each year, the clubs would rotate to host a special event for each other, including a luau, fashion shows, picnics and auctions.

The Peck club also has disbanded but is reforming under a new name in Orofino. They have invited the Lenore ladies to join — something some of the members are considering.

As far as the other functions the club provided, it’s still unknown who — if anyone — will take up the slack.

It’s a reality club members admit makes them feel sad. Choosing to conclude a 112-year-old institution that has benefited the community in so many ways was a difficult decision to make.

“Well, we actually cried,” Freeman said. “And we decided that even though there’s no longer a Willing Workers Club, we’ve made such good friends that we’re still going to get together and do something. We’ll bring our sack lunches and visit and laugh and tell stories.”