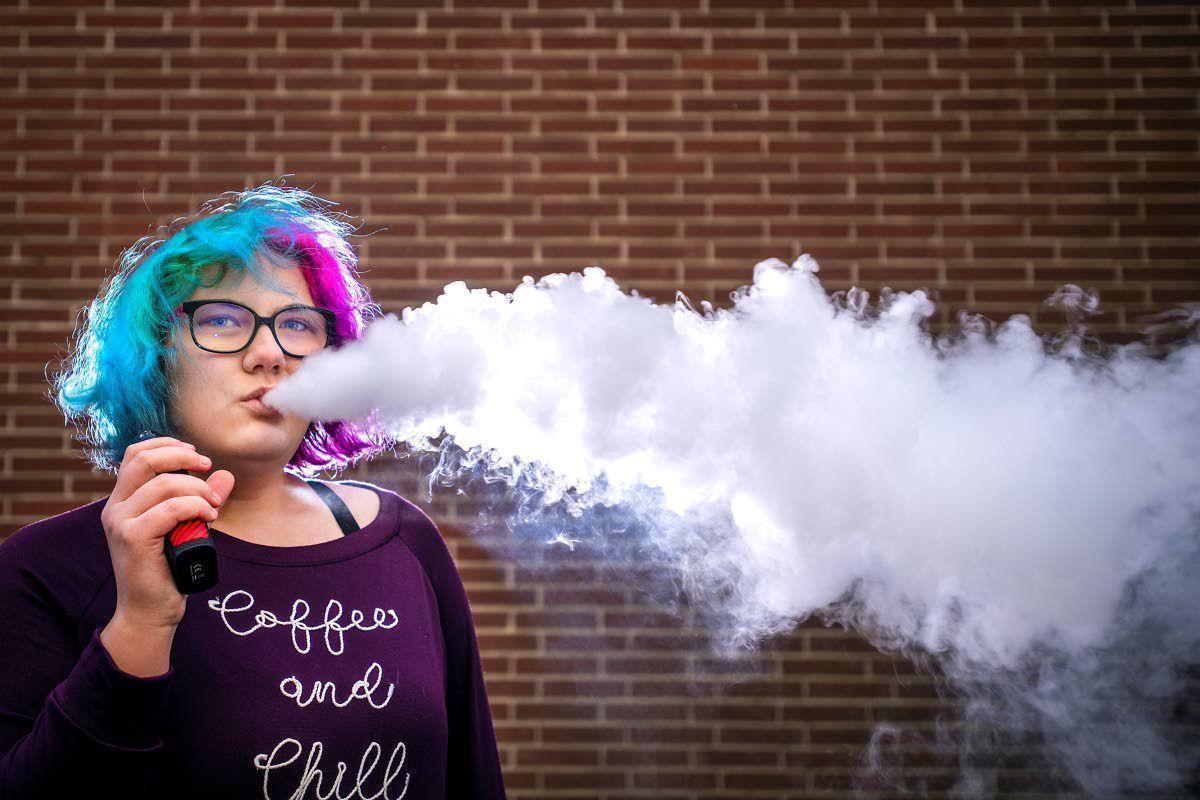 Delaney Martin, of Lewiston, demonstrates her vaping device. Martin, 20, says she has been vaping since she was 16. 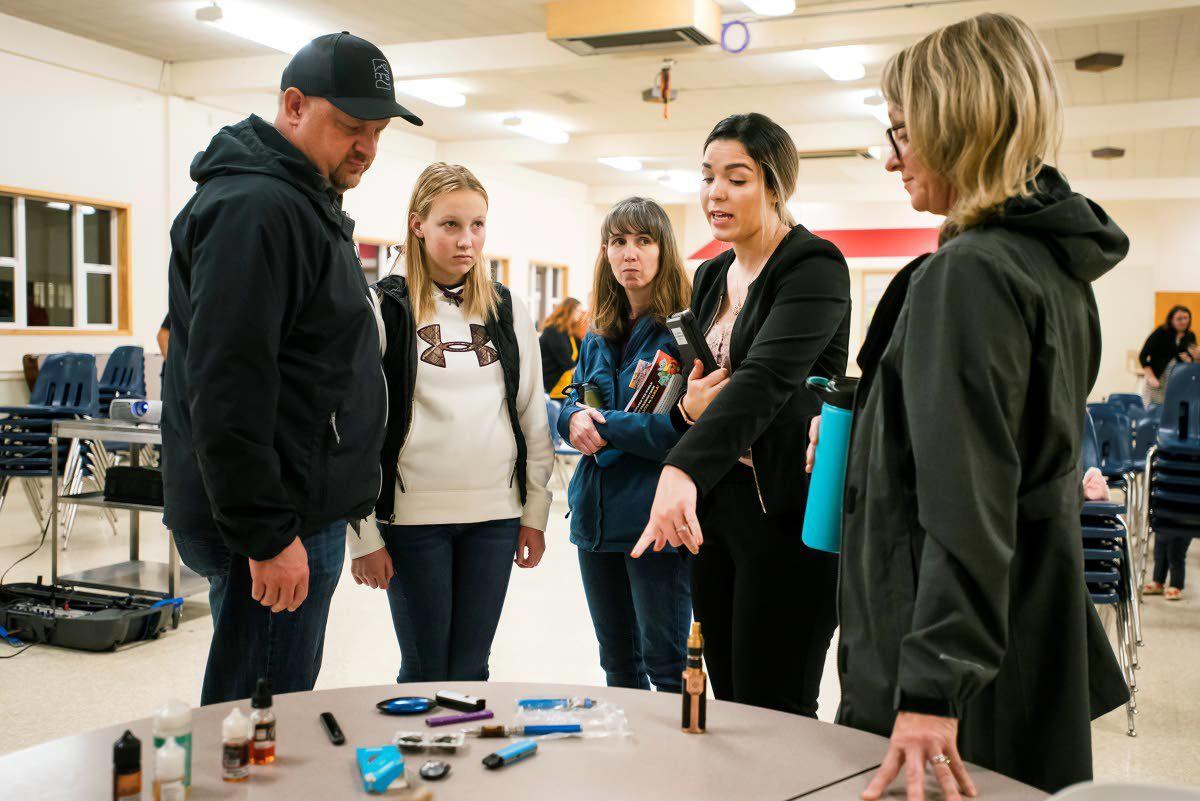 Samantha Oliver, a health education specialist at the Idaho Department of Health and Welfare, points out one of many confiscated vaping products during an informational meeting on vaping for parents and students at Jenifer Junior High School in November. 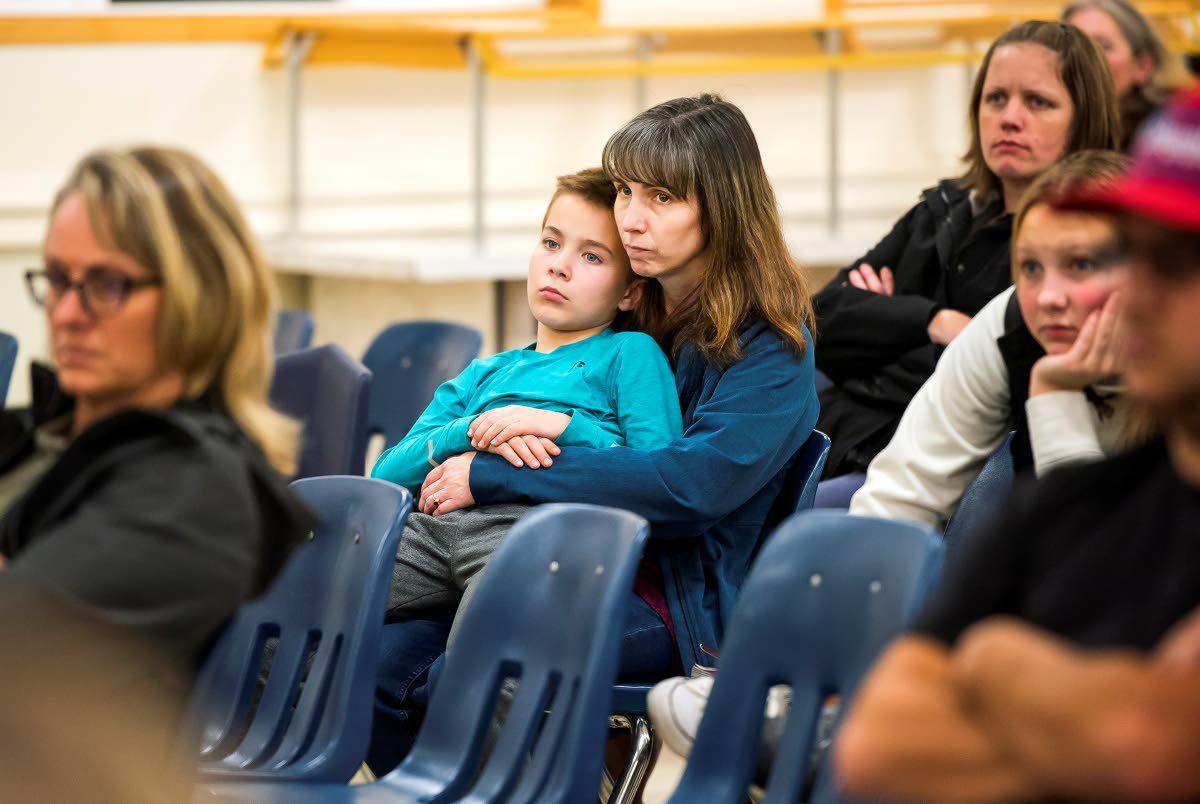 Garrett Qualman, 9, sits on his mother Melanie Qualman's lap and listens during an informational meeting on vaping for parents and students at Jenifer Junior High School last month. 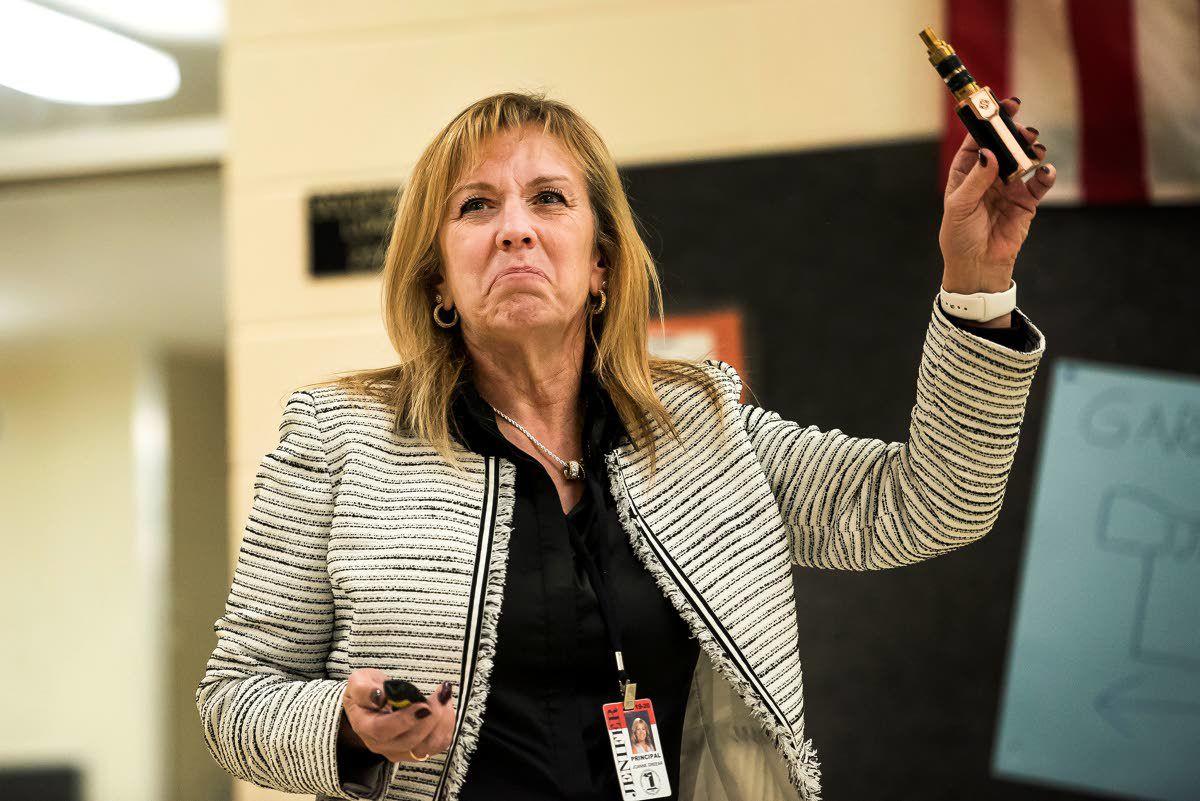 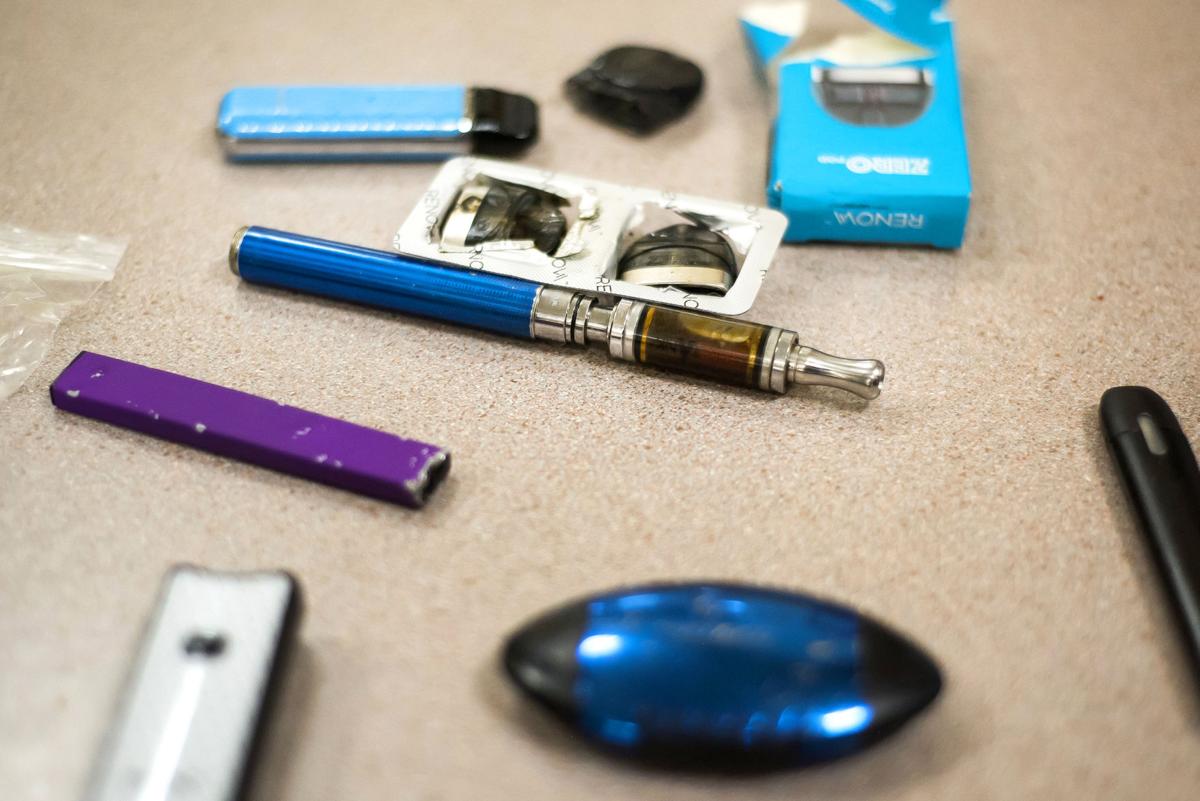 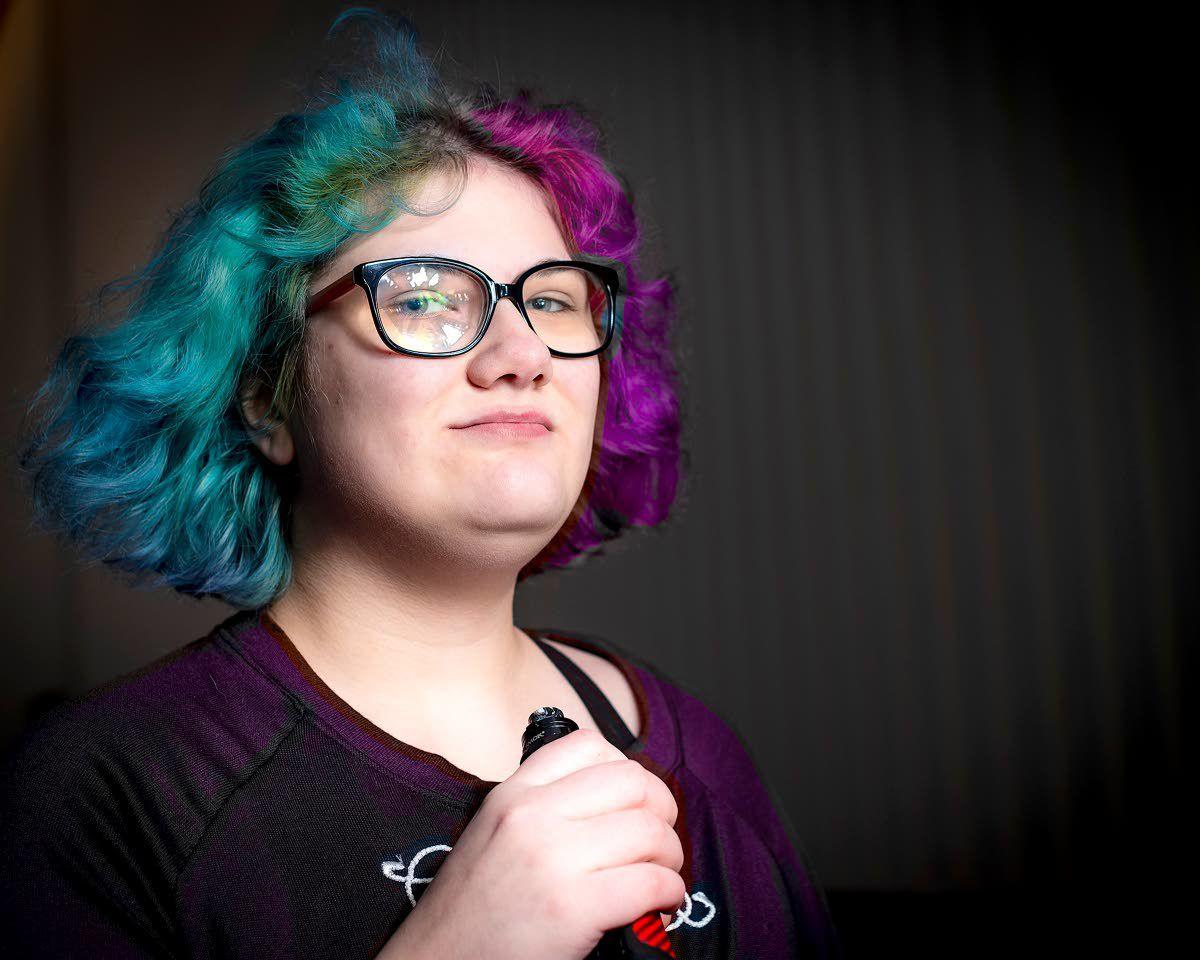 Delaney Martin, 20, of Lewiston, says vaping, which she believes is safter than smoking tobacco cigarettes, helps her feel calm.

Delaney Martin, of Lewiston, demonstrates her vaping device. Martin, 20, says she has been vaping since she was 16.

Samantha Oliver, a health education specialist at the Idaho Department of Health and Welfare, points out one of many confiscated vaping products during an informational meeting on vaping for parents and students at Jenifer Junior High School in November.

Garrett Qualman, 9, sits on his mother Melanie Qualman's lap and listens during an informational meeting on vaping for parents and students at Jenifer Junior High School last month.

Delaney Martin, 20, of Lewiston, says vaping, which she believes is safter than smoking tobacco cigarettes, helps her feel calm.

The Lewiston native was working at a fast-food restaurant in town. Many of her older co-workers vaped, and she saw it as a way to get a break from the workday.

The fruit- and dessert-flavored vape juices were an instant draw for Martin.

“It smelled so good,” Martin said. “And it tastes good, so it’s very addicting that way.”

She started using vaping juice with no nicotine in it, but six months later switched over. Now 20, Martin vapes every day.

When she started vaping, she said it was rare among her classmates.

“My friends didn’t know about it,” she said. “No one vaped.”

But that has changed.

In December 2018, U.S. Surgeon General Jerome Adams declared teen vaping an epidemic after more than 3.6 million youth were found to use e-cigarettes.

Area school administrators have seen an increase in the number of students who vape during the school day.

A year ago, Jenifer Junior High Principal JoAnne Greear said she saw a “big uptick” in usage. It’s a problem that plagues schools across the nation.

A recent wave of illnesses and deaths among vapers has done little to change students’ habits, Greear said.

“I think they are just getting sneakier,” she said of the students who choose to vape during the school day.

Results released this week from the 2019 Idaho Youth Risk Behavior Survey show more than 48 percent of high school students surveyed had tried an e-cigarette or vapor product — an increase from 14 percent in 2017 — while more than 21 percent identified as a current user.

According to the 2018 Washington State Healthy Youth Survey, 33 percent of 10th graders in Asotin County reported using vapor products in the last 30 days, an increase from 18 percent two years earlier.

Forty-five percent of 12th graders in the county reported vaping in the last 30 days, an increase from 22 percent in 2016.

Hoffman said students vape in school restrooms and on buses. Now, instead of attempting to make the biggest smoke clouds to impress their friends, the culture has evolved into “a cat and mouse game.”

“The students charge their Juuls (a vaping device) on computers provided by the school,” Hoffman said. “It’s a huge problem.”

In November, officials at Jenifer held an evening presentation for parents and students to discuss the “hazards of vaping and e-cigarettes.”

Over the past two years, Greear has confiscated different devices that run the gamut in style and size. Some resemble a USB drive, while others look like a lighter or a pen.

The Centers for Disease Control and Prevention pinpointed vitamin E acetate — a thickening substance used in illicit vaping juice, often in THC-containing products — as the likely cause of the recent illnesses and deaths.

As of this week, 2,291 people have been hospitalized and 48 deaths have been confirmed as a result of lung injury from e-cigarettes or vaping.

Hoffman and Samantha Oliver, a health education specialist at the Idaho Department of Health and Welfare, said there are a plethora of other harmful chemicals consumed through vaping.

“Kids don’t know what are in these (vape) juices,” Oliver said at the community presentation. “It’s not just water vapor. They are not knowledgeable on the fact that they have a ton of toxic chemicals.”

As an example, Oliver said up to 40 different chemicals can be used to try to mimic flavors like strawberry. Hoffman said the juices can also contain lead, arsenic and formaldehyde.

Despite the news of illnesses and deaths, Martin said she believes vaping is safe as long as a person purchases products from an established store.

“I’ve been vaping for four years, and I’m still here,” she said. “It’s safer than cigarettes.”

But in a webinar focused on vaping in schools, Diana Zuckerman, president of the National Center for Health Research, said that doesn’t appear to be the case. Part of the problem, Zuckerman said, is that “so-called experts” have from day one said vaping is healthier than smoking. But she emphasized that vaping seems to be more dangerous in the short term, while the impacts of smoking often appear decades later.

“When we think about smoking, we know that smoking is dangerous, but it’s dangerous 20, 30, 40 years down the road,” Zuckerman said. “The fact that we have so many kids hospitalized from vaping (in a short time frame), it’s just an unprecedented kind of epidemic.”

“When my father started smoking in 1927, they didn’t think smoking was bad either, and we know that is not the case,” Greear said. “I don’t want my kids here at Jenifer to be the guinea pigs.”

Martin said she knows exactly what goes into her vaping products. She purchases her supply from a local store that makes its own vape juice.

Experts, however, say there is a lack of regulation, since science has not yet caught up with the rapid growth of the industry.

“The (ingredients) might be regulated for ingestion, but vapor or oil is not regulated to inhale,” Hoffman said. “It doesn’t make sense to put anything in your lungs. It just can’t be healthy, and it can’t be 100 percent safe.”

Martin supports more regulations for the industry. She doesn’t condone underage vaping or smoking, but if she was to go back to her 16-year-old self, she said she wouldn’t change her decision to take her first puff.

“I’d still do it,” she said. “It helps with my anxiety; it helps me feel calm. It’s like a security blanket, and I feel calmer knowing (my vape) is with me.”

A town hall meeting focused on vaping and underage drinking is scheduled for 6:30 p.m. Monday in the Clarkston High School auditorium, 401 Chestnut St.

Resources: Teens can go online to www.teenlink.org or www.escapethevape.org for help quitting.