Boise Police storm a pickup truck, finding the driver dead from gunfire that occurred minutes earlier. Brian Allen Poppleton was armed with a handgun, and police were trying to talk him into surrendering when gunfire erupted after an hourlong standoff in 2000. 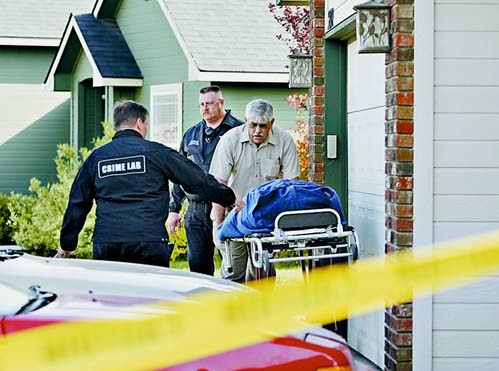 A man suspected in a domestic violence incident was shot and killed by Meridian police in this May 5, 2007, photo. Meridian police are continuing to investigate the officer-involved shooting at 2872 W. Valley Green Way. The man reportedly threatened police with a knife. 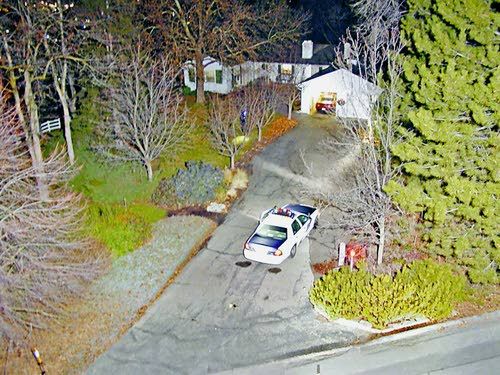 This aerial photo shows the scene where 16-year-old Matthew Jones was shot by a police officer in the driveway of Jones´ North Boise home in December 2005. The photo is one of dozens of evidence photos released as part of the Ada County Critical Incident Task Force report on the shooting. Officer Andrew S. Johnson´s squad car is still in the driveway, where he parked it prior to the shooting. Johnson shot the teenager in the driveway behind the patrol car after the teen approached him carrying an antique rifle and bayonet.

Boise Police storm a pickup truck, finding the driver dead from gunfire that occurred minutes earlier. Brian Allen Poppleton was armed with a handgun, and police were trying to talk him into surrendering when gunfire erupted after an hourlong standoff in 2000.

A man suspected in a domestic violence incident was shot and killed by Meridian police in this May 5, 2007, photo. Meridian police are continuing to investigate the officer-involved shooting at 2872 W. Valley Green Way. The man reportedly threatened police with a knife.

This aerial photo shows the scene where 16-year-old Matthew Jones was shot by a police officer in the driveway of Jones´ North Boise home in December 2005. The photo is one of dozens of evidence photos released as part of the Ada County Critical Incident Task Force report on the shooting. Officer Andrew S. Johnson´s squad car is still in the driveway, where he parked it prior to the shooting. Johnson shot the teenager in the driveway behind the patrol car after the teen approached him carrying an antique rifle and bayonet.

Nearly 50 people have been shot by police and sheriff's deputies in Idaho in the past 15 years. And the pace of such deaths is increasing.

With concern rising about police-involved shootings nationwide - and in Idaho, especially since an Adams County rancher died in an encounter with two deputies - the Idaho Statesman reviewed shootings so far this century. The newspaper's tally found the number of annual fatal shootings was 0 or just 1 from 2000 to 2003 and has risen to about five annually over the past five years.

In 45 of the 47 cases found, authorities ruled that officers' actions did not deserve to be prosecuted. Two cases are still under investigation.

The Statesman has compiled Idaho's first known database of officer-involved shootings. The database follows in the tracks of national databases established this year by the Washington Post and The Guardian of London, though theirs cover only shootings since the start of this year.

The Idaho Attorney General's Office, Idaho Prosecuting Attorneys Association, U.S. Attorney's Office and others queried cannot recall any incident in which an officer in Idaho has ever been charged in connection with a fatal shooting.

Former Ada County Sheriff Gary Raney, now a consultant for the U.S. Department of Justice, said shootings by officers in the line of duty have come under increasing scrutiny since the 1980s - a trend he endorses. There are more independent shooting investigations and laws, and better investigation techniques and evidence analysis than ever before, he said.

"It was not that long ago that law enforcement investigated its own shootings, and that is a bad way to do business," Raney said.

"Laws have become more clear to say that cops cannot just shoot people because they are running away," he said.

Idaho's officer-involved fatal shootings typically came in officers' response to crimes ranging from kidnapping to murder, while serving a warrant or during a traffic stop. Victims ranged in age from 16 to 62. Most were white men in their 20s, 30s and 40s. Three were women.

At least five of the people shot were reportedly suicidal, including Brian Allen Poppleton, the first of the 47. He was killed in 2000 by Boise police gunfire after an hourlong standoff with officers at Franklin and Cole roads. Poppleton spent most of the hour sitting in a truck in the road and pointing a gun at his head. Officers shot him after he turned his gun in their direction.

Three-fourths of the victims had guns. A Nampa police officer shot and killed Anthony Joseph Bosworth II, 30, of Star, in 2007 during an exchange of gunfire as he ran from officers into a farm field north of Nampa. Police were looking for Bosworth in connection with the disappearance of Meridian bail bondsman Joshua Schmidt, who was later found dead.

Some cases involved innocent third parties. In 2013, after a high-speed chase, Bradley Wilson took a man hostage inside a Petco store in Chubbuck and threatened to kill himself and the hostage. An officer fired one shot, killing Wilson. The hostage was not harmed.

Police shootings in Boise came under scrutiny in the late 1990s. Eight people, including an officer, died in six police-involved shootings over a 16-month period. The victims included Boise Police Officer Mark Stall and two other men involved in a downtown shoot-out in September 1997.

Former Boise Mayor Brent Coles and the city council created an ombudsman's office in 1997, putting the independent investigator in the mayor's office but giving him access to all Boise police records. Around that time, all police agencies in Ada County formed a task force and decided a member agency would conduct criminal investigations of another agency's officer-involved shootings.

In the last 15 years, Boise has had eight police-involved fatal shootings, the same number that occurred during that 16-month period in 1996 and 1997.

Now Idaho State Police and the FBI are investigating the Nov. 1 deadly encounter in Adams County between Deputies Brian Wood and Cody Roland and 62-year-old rancher Jack Yantis, who died.

A dispatcher called Yantis to a crash scene involving his bull on U.S. Highway 95 north of Council. The bull was alive but mortally wounded.

Yantis' wife and nephew, who witnessed the incident, said he was aiming his rifle at the back of the bull's head to kill it when one of the deputies grabbed Yantis from behind and swung him around, and then the other deputy opened fire. Nothing from the deputies' account of the incident has been released. In its initial report, the Idaho State Police said Yantis and both deputies fired their weapons.

Idaho is 'fortunate' so far

Unlike many parts of the country, Idaho hasn't experienced random or mass shootings like the events that happened Dec. 4 in Colorado Springs or on Wednesday in San Bernardino, Calif.

Raney said Idaho has been lucky despite its rural character and shortage of mental health services. "Statistically a lot of shootings occur in rural areas, in part because of the culture in rural areas and so many of the shootings are related to mental-health issues," he said.

"We also do not have the sort of things we see in other states, where bad cops are protected and get to keep their job. We really do have good cops who are out there to do the right thing," Raney said.

"We are fortunate in the events that do not happen. What the public never hears about is the all the instances when a cop could have killed someone and did not. Those happen so often."

But to think Idaho is immune to an officer being involved in a wrongful death is misguided, he said: "At some point it is going to happen."

After 9/11, training and equipment

The rising focus on officer-involved shootings parallels rising concern about the threats to officers from terrorism in a post-9/11 world.

"The pendulum has swung to a very tactical level," Raney said. The Department of Homeland Security has sponsored tactical training, and the federal government has provided surplus military equipment to local law enforcement agencies.

"The shooting scenarios where we train are, 'There is a threat. You have to shoot fast or you are going to die,' " said Raney.

Raney's formula for good policing is: Use common sense and follow best practices.

Common sense can be maintained by hiring the right people and ensuring they are well trained. Following best practices requires having policies and ensuring officers know and use them.

"I see over and over again across the nation where there was a policy in place and nobody has paid attention to it for the last five or six years," he said. "When you have this tacit ignoring of a policy, it does not help us."

"Rural Idaho agencies struggle for resources," he said. "They cannot dedicate someone to create a policy manual. They do not have the resources to create a training program."

The money a small department needs to send officers to several weeks of training a year could instead buy the department a much-needed vehicle - used, because the agency cannot afford new.

Raney is completing a project with the Idaho Counties Risk Management Program, which insures local governments, and the Idaho's sheriffs and police chiefs associations to create a standardized policy manual for policing in the state.

The Statesman interviewed Raney by phone on Wednesday while he was in Chicago, where the police chief was just fired amid scrutiny over a white police officer shooting a black teenager 16 times in October 2014. As he spoke, the San Bernardino shooting that killed 14 people was underway.

"As I stand here, this a great example, this is what police have to be trained to respond to," he said. "To go in when you have an active shooter and be able to react. That is what police face every day. This heightened level of awareness, this hyper vigilance."

'There are always lessons'

Raney, who joined the sheriff's office in 1983 and was elected sheriff in 2005, retired this year. He never had to shoot anyone while in the line of duty. He said he found himself numerous times in situations where he "would absolutely have been cleared" in using deadly force, but he did not use it.

In one case, Raney walked into a home and a man was lying on the floor aiming a rifle at Raney's head.

"I could have shot and killed him. He knew who I was. He knew why I was there," Raney said. In this case, the man was having a bad drug reaction. Raney said he knew that and was able to de-escalate the situation and avoid having to shoot the man. The next day he visited the man in jail.

"Good or bad there are always lessons to be learned," he said. "I wish we would do a better job statewide of lessons learned. What can we learn about these situations to make sure it does not happen again? There needs to be an emphasis on how to keep officers safe, how to avoid these shootings and how to de-escalate these situations."