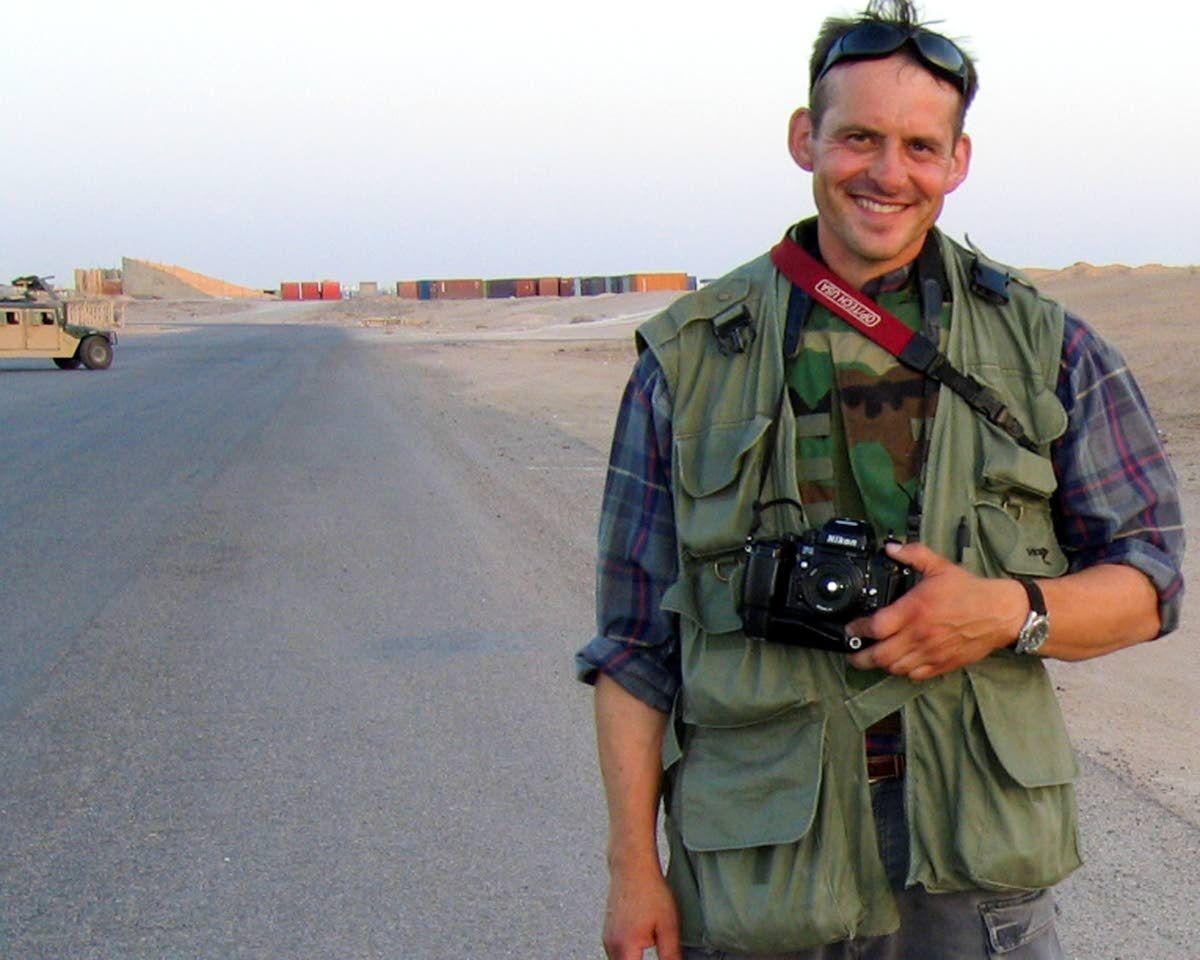 Ralph Bartholdt spent the summer of 2004 in Iraq as an embedded journalist. 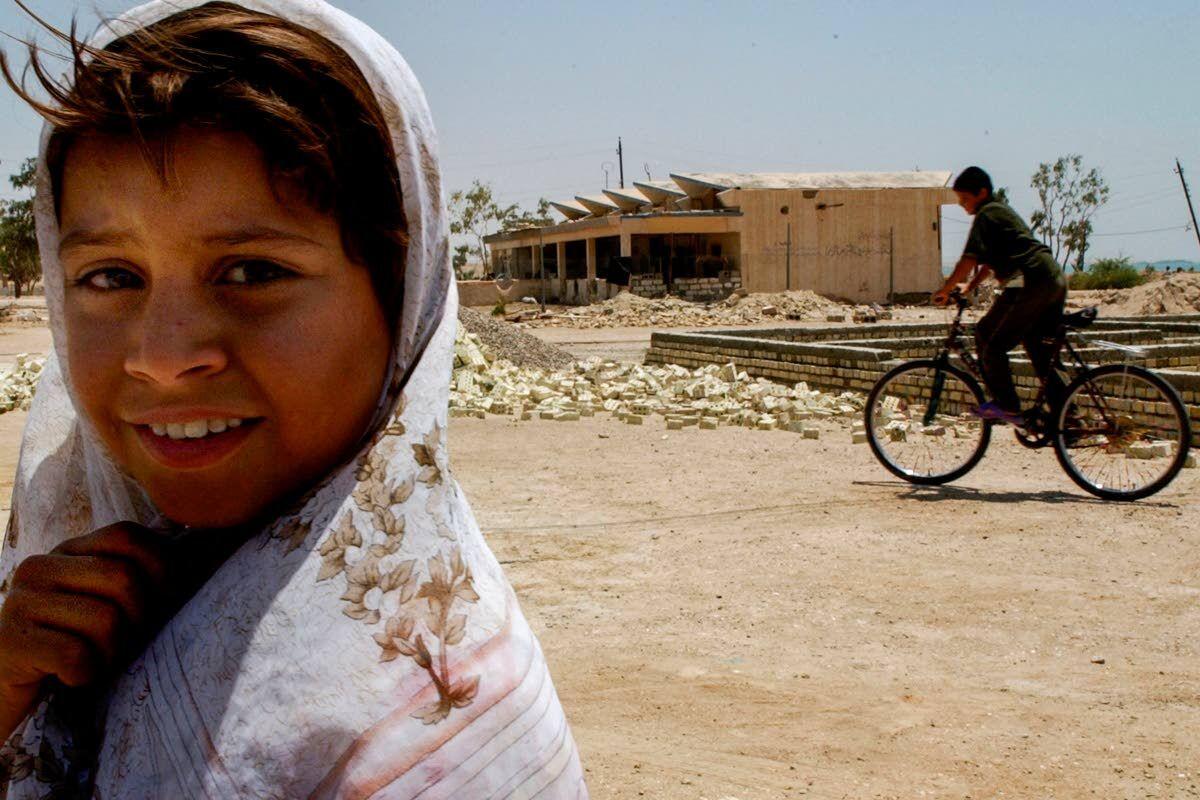 A young boy rides the only bike in Kabani, Iraq, according to Bartholdt while he was embedded with the U.S. military in Iraq in 2004. 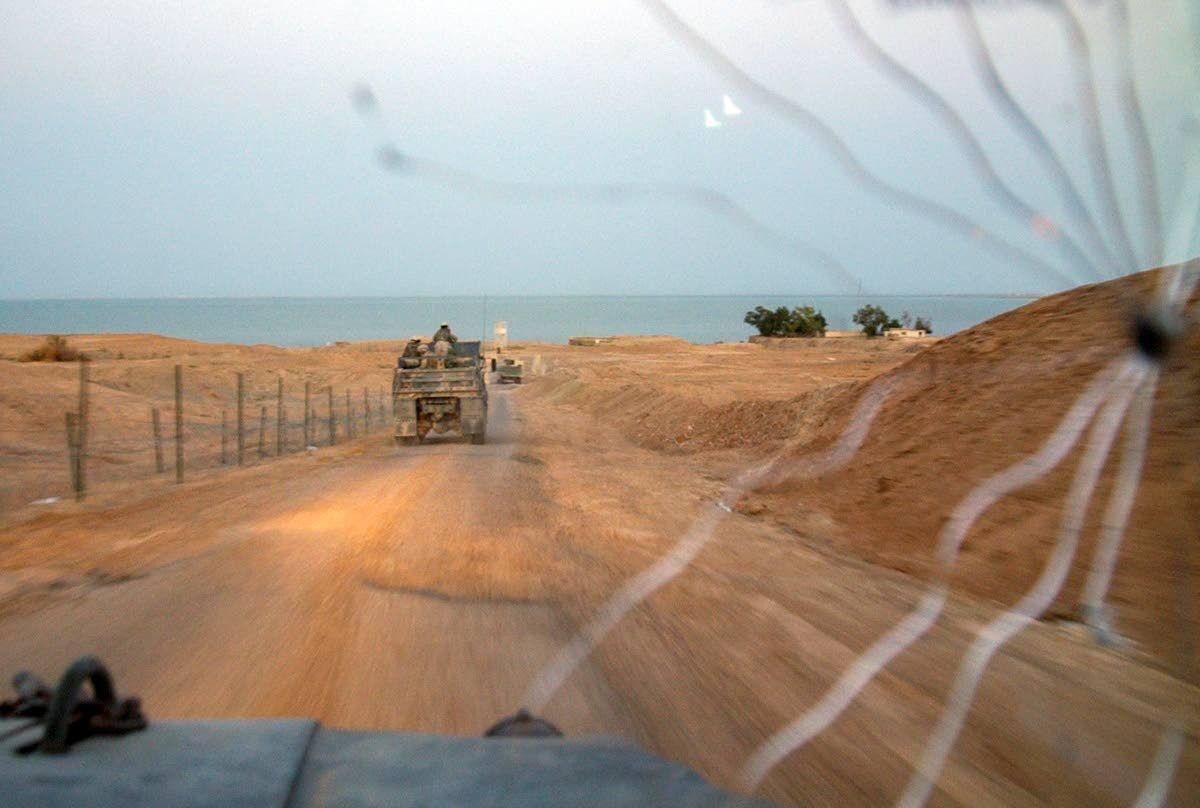 ABOVE: Bartholdt goes on a morning drive to Habbaniya while embedded with U.S. troops in Iraq.LEFT: A convoy security team consisting of Lance Cpl. Chris Musick on top of the Humvee, Cpl. Steven “Skinny” D. Jordan, and Lance Cpl. Arthur Morales are seen at a staging area before leaving the wire to Fallujah. 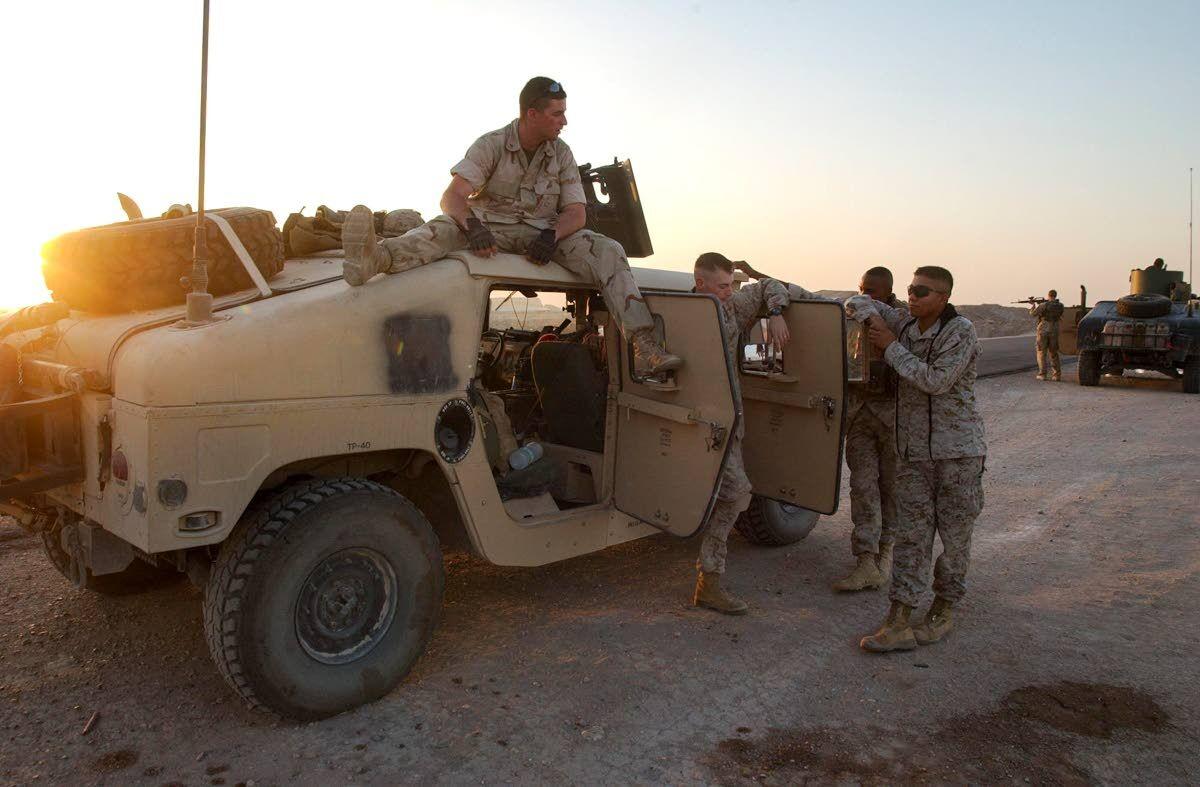 Ralph Bartholdt spent the summer of 2004 in Iraq as an embedded journalist.

A young boy rides the only bike in Kabani, Iraq, according to Bartholdt while he was embedded with the U.S. military in Iraq in 2004.

ABOVE: Bartholdt goes on a morning drive to Habbaniya while embedded with U.S. troops in Iraq.LEFT: A convoy security team consisting of Lance Cpl. Chris Musick on top of the Humvee, Cpl. Steven “Skinny” D. Jordan, and Lance Cpl. Arthur Morales are seen at a staging area before leaving the wire to Fallujah.

A seemingly casual demeanor masked high-level leadership skills that Bartholdt, an embedded journalist in the Iraq War, witnessed when he accompanied Steven “Skinny” D. Jordan on a mission.

Skinny’s job was to lead convoys carrying millions of dollars in supplies over roads that had the potential to turn into death traps.

The convoys always went after sunset to be less visible, took several hours and followed circuitous routes to avoid ambushes.

That night, a rocket attack had hit Fallujah, the cargo’s destination, forcing the convoy into a holding pattern, carving into scant hours it had to complete the trip before dawn.

At one stage, the only direction Skinny had to follow was the hard-to-spot glow of a cigarette butt. The convoy eventually strayed into a cul-de-sac and became a sitting duck for an attack.

Yet amid the danger and stress, Skinny formed a plan and began giving commands that turned around the entire convoy and got it headed in the right direction. None of the vehicles drew enemy fire or collided.

“I was blown away by this young man who took this tremendous responsibility and got the job done without calling anybody asking what I should do,” said Bartholdt, a former Lewiston Tribune reporter who now works at the University of Idaho as a communications manager.

“He just took charge,” he said. “That’s so amazing to me. Every day you were there you saw this kind of stuff.”

Skinny was the subject of one of many profile pieces Bartholdt wrote during the summer he spent in Iraq in 2004. His stories ran in the St. Maries Gazette Record where he was an editor and sometimes in the hometown newspapers of the Marines.

In his late 30s with young children at home, Bartholdt covered his own travel expenses. He survived on his pay from the Gazette for weekly segments and the occasional check from the hometown newspapers. For him, the assignment was about more than money.

“What I wanted to do in Iraq was get the stories of the common people that were fighting this war,” Bartholdt said. “That was my whole point. I didn’t care about tactics or politics or any of that.”

His time in Iraq fulfilled a career goal that he had formed a decade earlier after reading the work of Michael Kelly. He was one of the few journalists who had been on the ground with troops during the Persian Gulf War in the early ’90s and died covering the Iraq War.

Bartholdt spent months trying to be embedded before his application was accepted, competing against journalists from big networks like CNN. Then he selected the riskiest of three offers, choosing to accompany Marines who protected the convoys instead of being placed in the Green Zone at Baghdad or with pilots.

As a journalist, he was unarmed when he was working, wearing a flak jacket, a Kevlar helmet and carrying cameras. The same Marine usually accompanied him, explaining to officers who he was and what he was doing, if necessary.

Worries about his own life were normally in the background because of the confidence he had in the Marines who surrounded him, Bartholdt said.

A first sergeant who took him under his wing when he arrived in the war zone had assured him the men under his command were professionals who would keep him safe. That promise was affirmed by how the Marines he met conducted themselves with the efficiency of seasoned executives, who carried guns instead of briefcases.

“That’s why I was never really afraid,” Bartholdt said.

By focusing on the stories of individual Marines, he developed a rapport with them that led to a broader understanding of the war. He would get invitations to tag along when they were carrying out their duties.

In one instance, he went to a supply depot called the Rock guarded by former officers of Saddam Hussein’s army, riding in a small caravan of three or four Humvees.

Inside the depot, U.S. special forces from more than one branch of the military were overseeing the operations.

“They had all these guys figured out that were working at the Rock,” Bartholdt said. “(One of the U.S. special forces people said) that guy there, we’ve got to watch him because we don’t trust him.”

An Iraqi educated in Britain served as an interpreter during a meeting over tea where the Americans heard grievances from the former officers of Hussein.

They weren’t being paid as well as they had been in their previous positions and were upset because they couldn’t visit their families, who had been moved out of their hometowns to prevent them from getting killed for their cooperation with the Americans.

“They had to drive up to see their families,” Bartholdt said. “It was dangerous because they could get stopped by insurgents.”

One of the Americans asked what they could do and was told the Iraqis needed to form their own militias.

After this had gone on for a while, one of the U.S. special forces officers suddenly began cursing out the interpreter for intentionally not sharing what was actually being said.

Bartholdt later asked what would have motivated the translator to be inaccurate. The translator, Bartholdt was told, wanted to gain land and have his own militia.

“They all had their own leaders and were feuding with each other and had been for hundreds and hundreds of years,” Bartholdt said.

Just as Bartholdt had no idea where he was headed the day he went to the supply depot, he had next to no notice the day he met Pullman native Gen. James Mattis who commanded the war effort.

Bartholdt got pulled onto a helicopter at the last minute, leaving so quickly he didn’t have time to grab his camera gear.

Soon they were flying over Fallujah so low they could see people cooking dinner, a strategy used so that aircraft couldn’t be heard until they were right over a building to reduce the chances of being hit.

Once they landed, Bartholdt was standing on a tarmac with a Navy chaplain, and a Marine, possibly the chaplain’s bodyguard.

A sergeant major Bartholdt knew quietly asked him what the hell he was doing there and Bartholdt said he didn’t know.

When a heavily armored convoy arrived, Mattis emerged, conferred briefly with the sergeant major before walking directly up to Bartholdt and shaking his hand.

The general said something about being glad that Bartholdt was there to write stories about the Marines.

One of the things that stood out about Mattis was he was wearing beat-up boots, not the special ones manufactured by the company, Danner, for the troops.

“I was kind of blown away,” Bartholdt said. “He’s the head guy. He’s running the whole show. It was unbelievable.”

That brief meeting with Mattis and everything else he experienced in Iraq changed his perspective profoundly even though he never witnessed combat.

He returned just before Labor Day in time to cover an annual parade in St. Maries with the usual entries like logging trucks. Amid the peaceful, friendly gathering, he was struck by how ignorant so many citizens are about their democracy.

“I came back to the United States and I just looked at people and I was amazed how people lived without knowing what was going on in these places and the sacrifices these people were giving,” Bartholdt said.