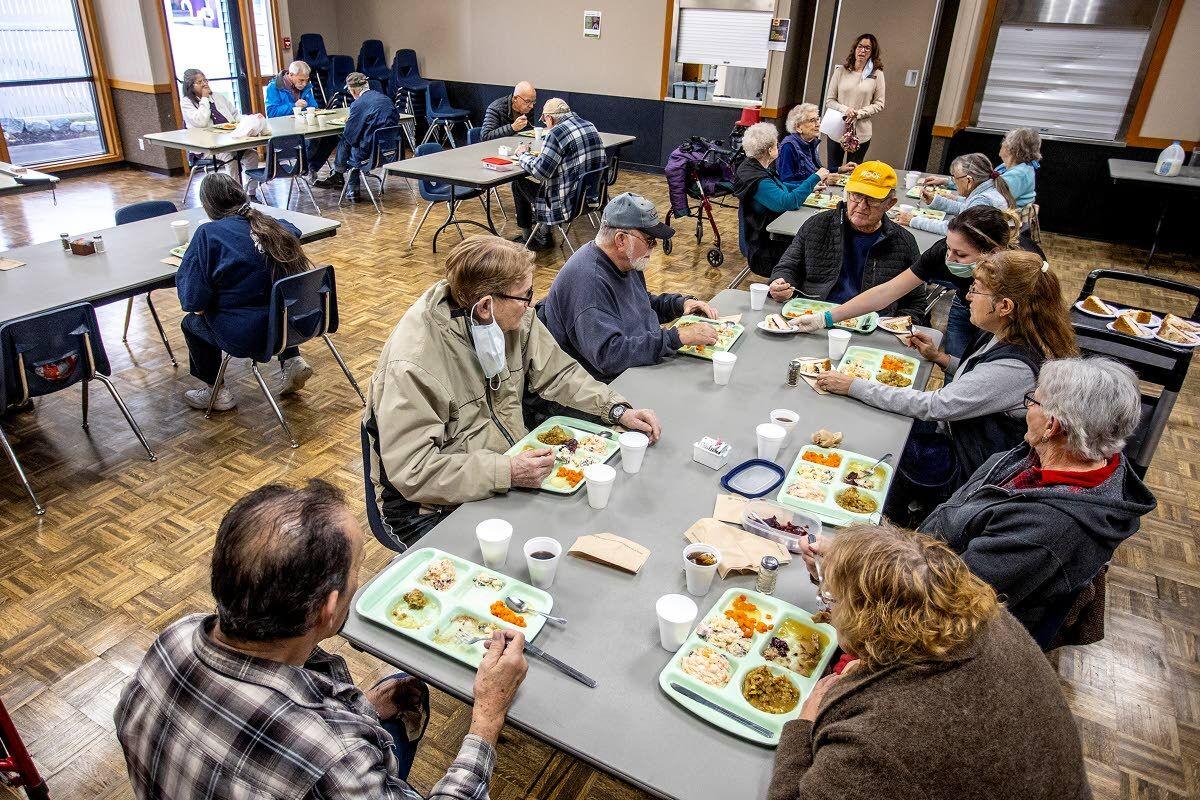 Ashlea Shop, of Lewiston, serves seniors a cheesecake dessert as they finish their Thanksgiving meal of turkey, stuffing, cranberries and pasta salad during a senior meal service at the Lewiston Community Center last week. 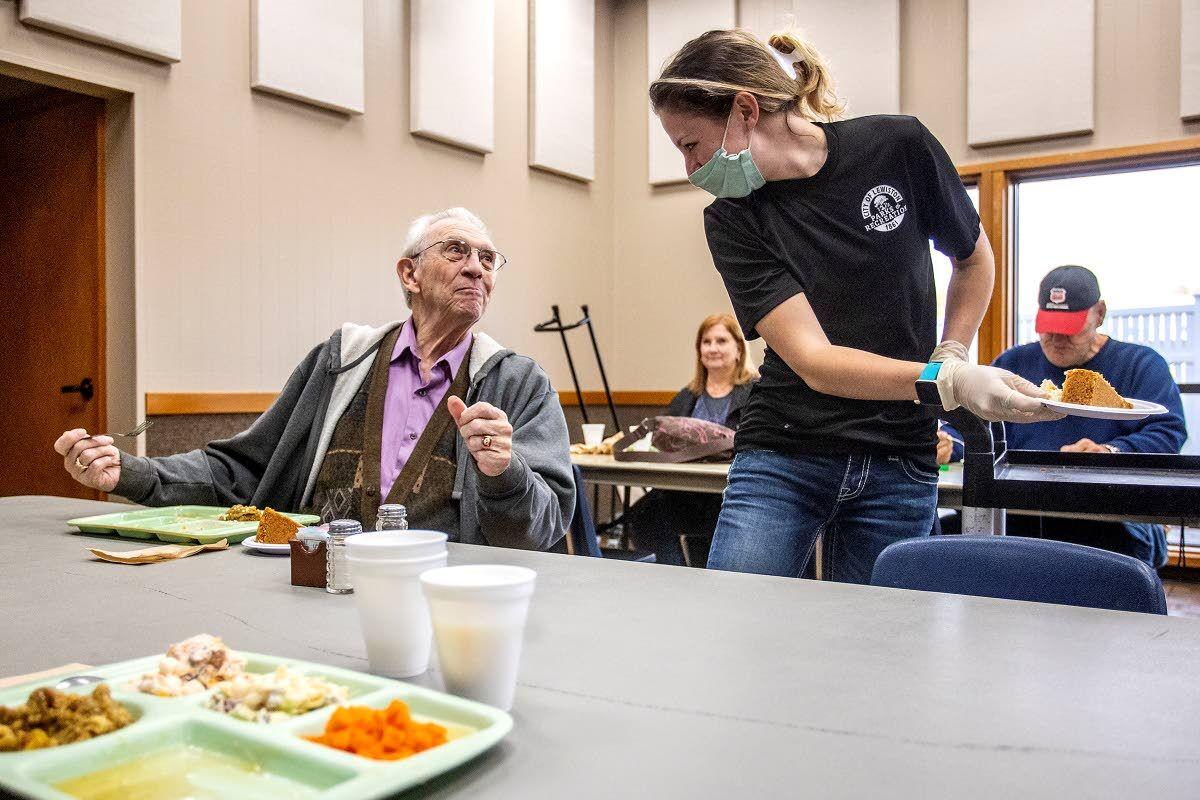 Rodger MacDonald shares a laugh with Shop during the senior meal service at the community center last week.

Ashlea Shop, of Lewiston, serves seniors a cheesecake dessert as they finish their Thanksgiving meal of turkey, stuffing, cranberries and pasta salad during a senior meal service at the Lewiston Community Center last week.

Rodger MacDonald shares a laugh with Shop during the senior meal service at the community center last week.

Faced with recent budget cuts and swelling numbers of clients, several senior meal sites in the area are turning to emergency fundraisers or cutbacks in services to balance the books.

Funding for the 22 senior meal sites and Meals on Wheels programs comes from the U.S. Department of Agriculture and trickles down through several agencies before hitting the Area Agencies on Aging, which distributes the money on an annual contract basis to the individual meal programs.

“We really do our best to try to explain all the nuances of our budget and the money we receive,” said Kristin Schmidt, director of the District 2 Area Agency on Aging for the five northern counties in Idaho.

“We don’t have as much funding as we’d like or what meal sites would like to have. We know that there is a need in our area and we’d like to be able to serve everyone in our service area that is food insecure.”

Some of the agency’s programs receive flexible funding and this year some of the money that normally goes to meal sites was diverted by the Idaho Commission on Aging toward modernization of the meal sites.

Schmidt said that was a necessary decision. Some sites needed coolers or stoves, plumbing work or other facility upgrades.

At the same time, demand on the meal programs increased because of the COVID-19 pandemic.

“Part of the reason why meal sites are feeling like there’s been cuts is because during (COVID-19) we knew that, not only were people homebound to a greater degree, but we also knew that the people that would be helping the seniors (volunteers) … they, too, were homebound,” Schmidt said.

More people began applying for home-delivered meals and Schmidt said although applicants were screened, the agency didn’t want to turn anybody away.

“So we realized that we weren’t going to have as much funding (this year) and that we had over-enrolled during COVID,” she said.

Currently people wishing to enroll for home-delivered meals are on a waiting list and as more people come off the home delivery schedule, others will be added.

Last year, the agency contacted the individual meal sites — which operate as independent businesses — and told them that the funding would be running out and they would need to start thinking about fundraising.

“In order for us to still be able to pay them each month, we pulled from other programs to help cover food costs and reimbursements. Because we knew that the need was great,” Schmidt added.

“We absolutely do not receive enough funding to do everything that we need to do. … I know that the meal sites are concerned because these are their community members — people they care about. We understand that. We just have to be honest about our limitations.”

Scott McGee, head of the senior meal program at the Lewiston Community Center, said because of the budget shortfalls his program had to stop serving weekend meals beginning in November.

And since the pandemic began, “we’re doing about 110 (home) deliveries a day. The average is between 85 and 100. We definitely saw an influx and then we were doing curbside and getting another 20 or 30 people a day.”

The Lewiston program is open for sit-down noon meals at the community center on Mondays, Tuesdays and Wednesdays. On Thursdays and Fridays, meals are home-delivered. McGee and one other full-time employee do all the work. Before the pandemic, there were three part-time helpers, “but trying to hire anybody right now is next to impossible,” he said.

Margie Anderson, who manages the Colfax Meals on Wheels program, said that at one point during the pandemic, the Whitman County Hospital that prepares the meals considered calling it quits.

“But they couldn’t do it,” Anderson said. “These people need those meals.”

The senior meal site in Colfax serves 20 to 30 people on Mondays and Thursdays and there is a separate food pantry where people can get food. Anderson said the Meals on Wheels program serves about 15 people every day and most of them are homebound and otherwise might not be able to fend for themselves.

“We have a whole slew of volunteers to deliver (the meals) and they’re all just fantastic,” Anderson said. “But we could always use more volunteers.”

In Orofino, the senior meals are served at noon on Tuesdays and Fridays. Wanda Payton, head cook for the program, said 20 to 22 people attend the meal and another 45 or so meals are delivered to homebound people.

Because of this year’s budget cutbacks, Payton said, she has turned to fundraisers such as baked foods sales and tightening the belt.

“I’ve cut back on buying groceries. I haven’t run out yet but I will if prices go higher,” Payton said. “We’ll just have to play it by ear.

“We are serving people, some of them live in a fifth-wheel (trailer). It’s not good where some of these people live.”