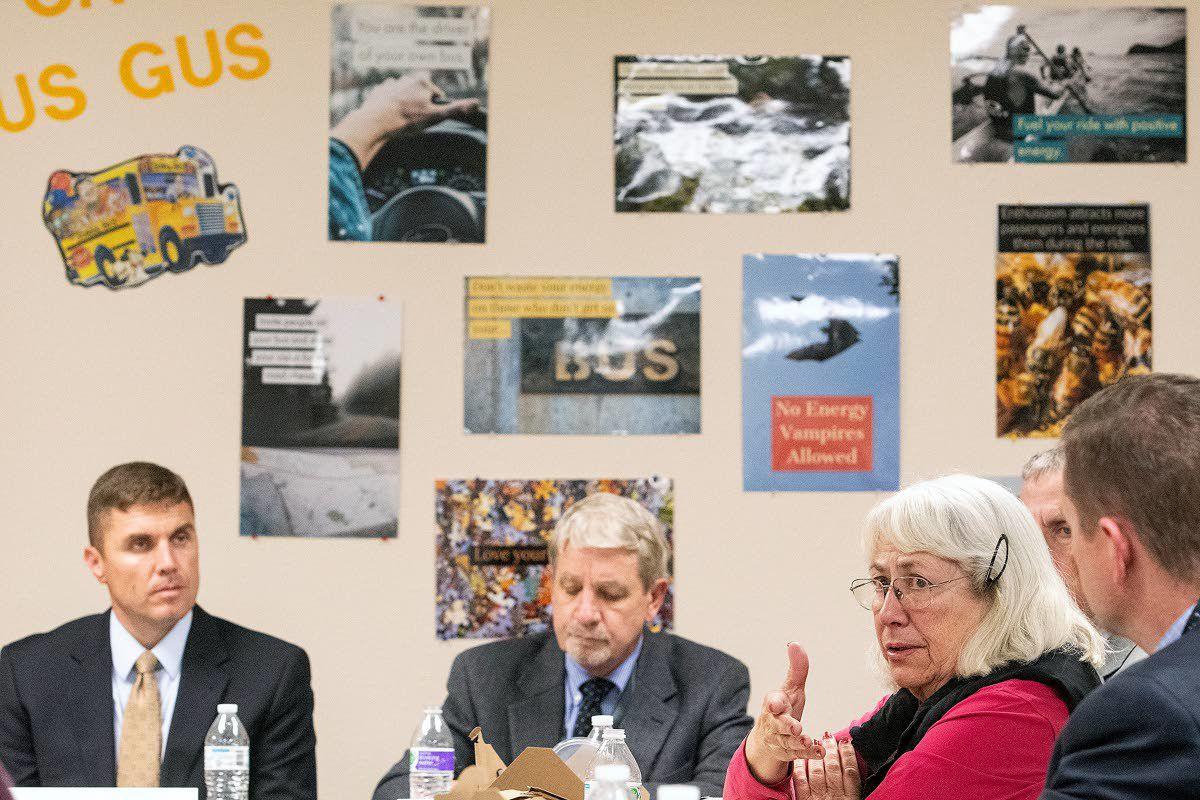 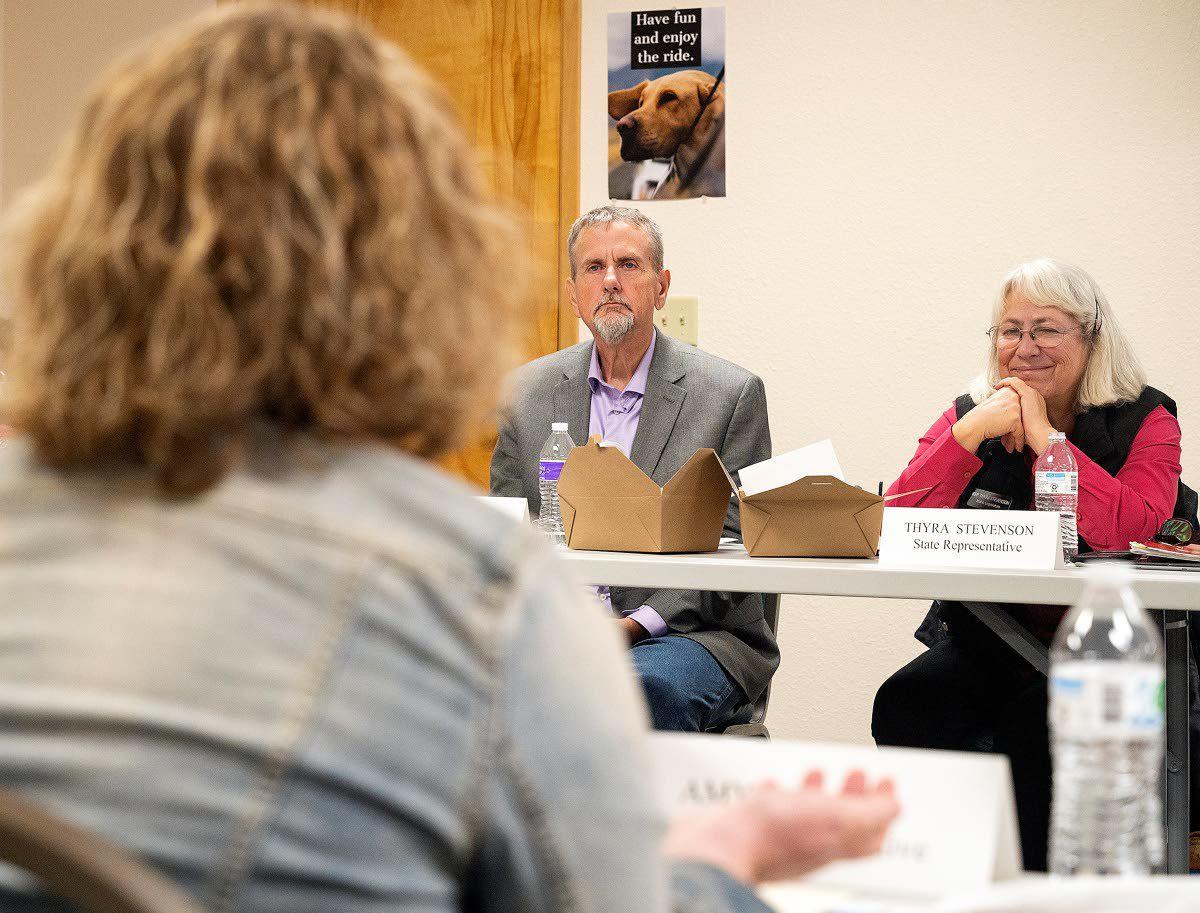 Rep. Mike Kingsley, R-Lewiston (center), and Rep. Thyra Stevenson, R-Nezperce (right), listen as Lewiston School District teacher representative Amy Arlint, a third-grade teacher at Whitman Elementary, talks about some of the issues pertaining to her fellow educators in the district during a Lewiston School Board meeting with local legislators on Monday in Lewiston.

Rep. Mike Kingsley, R-Lewiston (center), and Rep. Thyra Stevenson, R-Nezperce (right), listen as Lewiston School District teacher representative Amy Arlint, a third-grade teacher at Whitman Elementary, talks about some of the issues pertaining to her fellow educators in the district during a Lewiston School Board meeting with local legislators on Monday in Lewiston.

Officials with the Lewiston School District shared their top priorities for the coming Idaho legislative session with area representatives Monday night, advocating for support of the five recommendations put forth by the governor’s task force on education.

As administrators, school board members and teachers met with Reps. Mike Kingsley and Thyra Stevenson at the school district office, they especially voiced support for all-day kindergarten, a fair funding model for K-12 education and better pay for veteran teachers.

Since the implementation of an all-day kindergarten program, test scores have dramatically improved, said Lisa Fenter, the district’s director of curriculum.

This fall, 57 percent of first graders — who were the first class to attend Lewiston’s all-day kindergarten last year — met benchmark, or scored proficient, on the Idaho Reading Indicator assessment, compared to only 43 percent a year earlier.

“We really think a large part of that is having kids in school all day with the kindergarten (program),” Fenter said.

Idaho currently funds a half-day program, but Fenter said she’d like to see an all-day kindergarten program paid for by the state.

In the past, Kingsley said he believed kindergarten-aged children needed to be with their parents, but he became a “convert” after he attended a conference, which in part focused on the importance of early childhood education.

“It’s so enlightening to see how important that education is at a young age and how the brain develops,” Kingsley said. “I’m glad that we’re doing that (in Lewiston) and you’ll see more support for that, I think. It’s very important.”

“It didn’t take me long looking at the funding formula to realize it was pretty detrimental to Lewiston School District operations,” Hubbard said.

The district has historically received a 6 percent increase in state funding, but each rendition of the formula last year created a financial loss for the district, Hubbard said.

Superintendent Bob Donaldson shared the same concerns. Even a “hold harmless” clause — which would ensure the district didn’t lose any state funding — would have a negative impact for the district, he said.

“Holding us harmless, or at zero, is not a big sell,” Donaldson said, adding it would impact contract negotiations with teachers where raises are allotted.

The pay increases “are very well deserved,” according to Donaldson, but if the district received less money, that would no longer be an option.

Both Kingsley and Stevenson said they worked hard to try to right the formula because it harmed all of the school districts they represent. The formula was ultimately not approved last session.

“We both really support the fact that we would have liked to have seen a better funding formula,” Stevenson said. “We tried to influence it ... we are on your side here.”

District officials also advocated for funding the third rung on the career ladder for educator pay, which would include a $60,000 salary for veteran teachers. The pay boost would help retain veteran educators the district currently employs, officials said.

“Everybody in this room knows that we continue to ask more and more of our teachers,” school board member Staci Baldwin said.

“Teachers and educators are typically paid 19 percent less than other professions with the same amount of education, so as a nation, we need to do something about that,” but Baldwin continued to say the state of Idaho also has to address that issue.

“I want more people ... that are gifted in so many areas to pursue a degree in teaching and join us with that talent,” Armitage said.

The district stakeholders also touched on the other recommendations of the “Our Kids, Idaho’s Future” task force, which earlier this month approved recommendations that were forwarded to Gov. Brad Little for consideration.

Stevenson said she hadn’t studied the five recommendations in depth, but seemed supportive of the requests from the district representatives.

Other recommendations focus on K-3 literacy and the need to address social and emotional issues students face.

During a recent Idaho School Boards Association meeting, school board member Sheri Allen was told the recommendations were essentially “dead on arrival,” but the legislators’ remarks during the one-hour discussion seemed to give her hope.

“I’m pleased to hear both of you comment that you are in favor of these things,” Allen said.

Gov. Little has declared education as his top priority. He assembled the 26-member task force to create a five-year plan to help guide future investment and improvement to the K-12 educational system.

Do you support companies retiring longtime brand names and images such as Aunt Jemima and Uncle Ben?