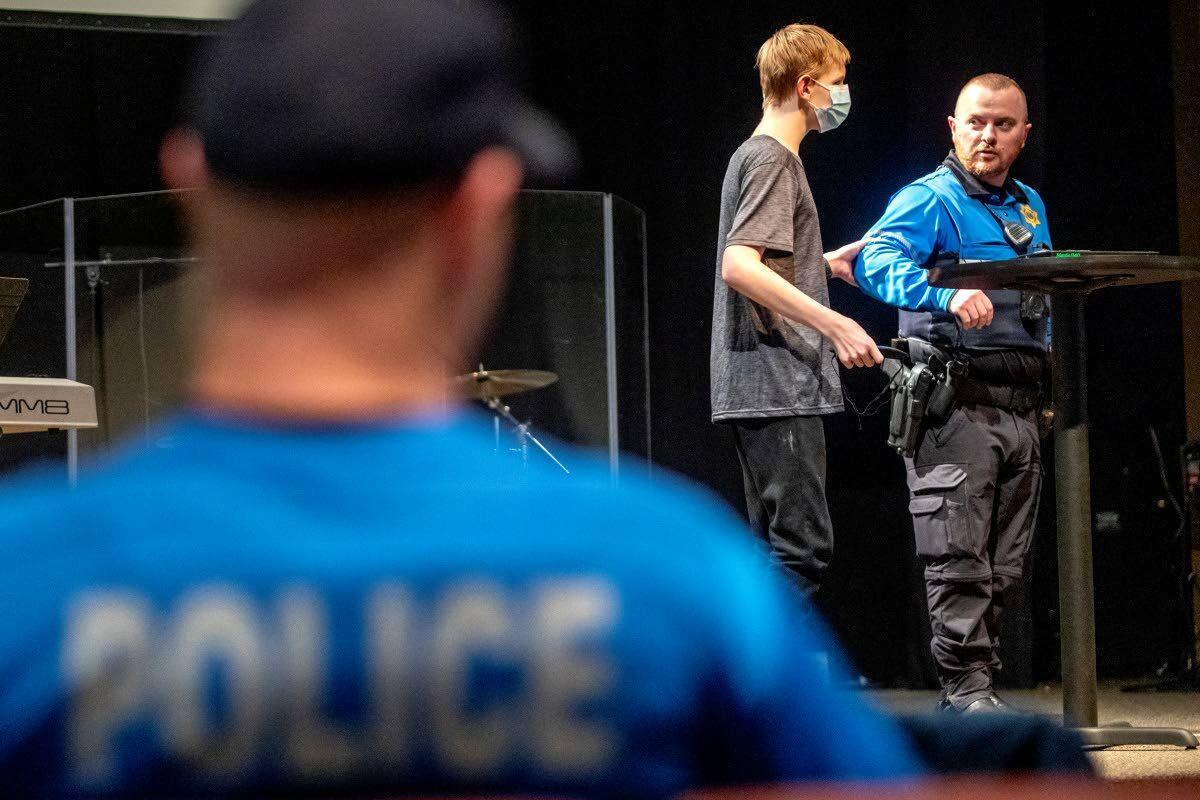 Caleb Hyndman, middle, 15, instructs Lewiston Police Officer Jacob Gunter on how to lead a person who is blind or vision impaired during a training Thursday at the Asotin County Fire Department in Clarkston. 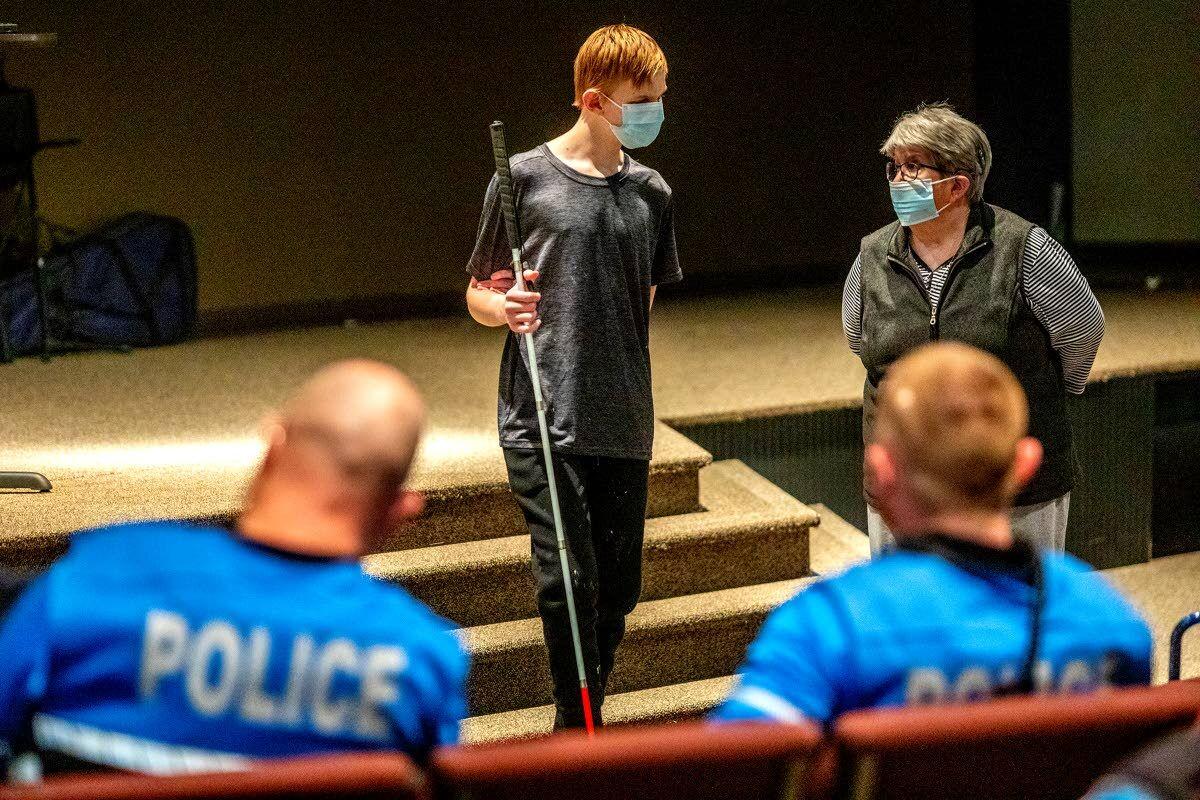 Caleb Hyndman, upper left, answers questions from his grandmother, Cynda Hyndman, upper right, as they discuss his experience growing up blind Thursday during a training for first responders. 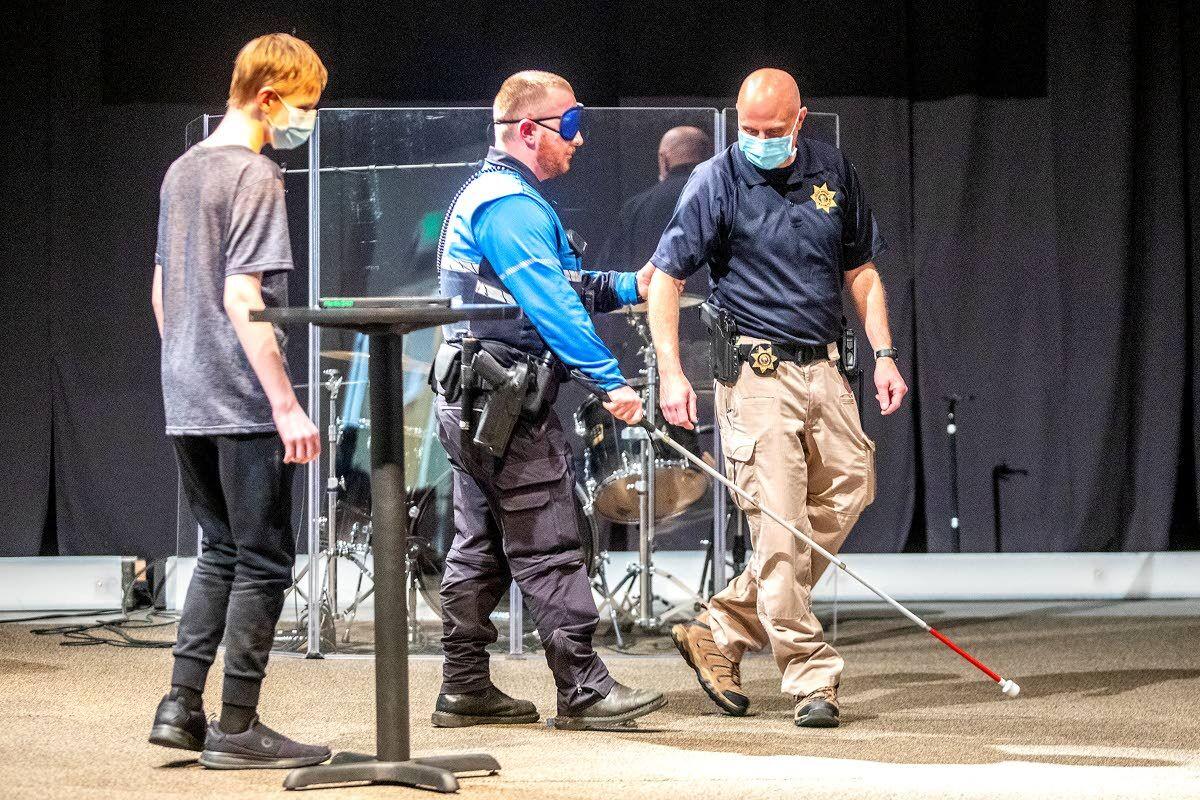 Caleb Hyndman, middle, 15, instructs Lewiston Police Officer Jacob Gunter on how to lead a person who is blind or vision impaired during a training Thursday at the Asotin County Fire Department in Clarkston.

Caleb Hyndman, upper left, answers questions from his grandmother, Cynda Hyndman, upper right, as they discuss his experience growing up blind Thursday during a training for first responders.

Caleb Hyndman is no ordinary teenager.

After all, not every 15-year-old trains police officers and first responders. In this case, the training is on how to work with blind and visually impaired people.

It’s something Hyndman considers himself an expert on. The freshman at Lewiston High School has been legally blind since birth, although he has some vision.

“I build on what I already know,” he said. “Then I help them (the people I’m training) with more information that they might not know.”

The idea for the training came when Hyndman met Capt. Jeff Klone of the Lewiston Police Department at a visit to the Idaho State Police with the Idaho Commission for the Blind and Visually Impaired. The visit was to help those who are blind and visually impaired touch and experience a police car and the equipment officers use. Klone and Hyndman began talking and the idea came up for Hyndman to do trainings for officers based on his experience and expertise.

The first of that work was done Thursday at three training sessions for law enforcement and first responders in the area at the Asotin County Fire District No. 1 in Clarkston. The free training will then be used statewide for Idaho. Jeffrey Riechmann, executive director of Courageous Kids Climbing, a group that provides opportunities for children with special needs and disabilities, also assisted with the event.

One of the first things Hyndman pointed out was to lead blind or visually impaired people by letting them grab the officer’s elbow, not their hand.

“Besides, if they hold your hand it looks weird,” Hyndman said.

Verbal communication is also key. “Tell them what you’re doing so they know there’s something going on,” he said.

Part of that verbal communication is announcing who you are and telling them what you are doing there. He noted that a blind or visually impaired person won’t be able to see a uniform so they wouldn’t know if a person was a member of law enforcement or a first responder.

Sighted people also should tell a visually impaired person what they’re doing when they are being led, like going up and down stairs, indicating how many stairs there are. If there is a door, tell the blind person if the door pushes out or pulls in, and if it opens on the right or left side.

Caleb Hyndman said he can’t tell people by their voice immediately and having people test him by asking, “Can you tell who it is by the sound of my voice?” is rude.

“It’s not nice for people to do that,” Caleb Hyndman said.

Caleb Hyndman also stressed the importance of not grabbing a blind person’s cane.

“Imagine if this is your way of seeing,” he said, holding his cane. “It’s important that I do have my cane and it’s nearby and can be used at any time.”

With guide dogs — not to be confused with therapy dogs — which are specifically trained to help a blind or visually impaired person, touching a dog can be considered interference.

“While that guide dog is working, no one can touch it,” Caleb Hyndman said, except the handler who the dog is trained to listen to.

Caleb Hyndman said if an officer needs to lead a visually impaired person who has a guide dog, have the handler grab their elbow, then take the dog’s leash, that way the dog will know it doesn’t need to be working. “They’re trained to be guide dogs and be normal dogs and that’s about it” he said. “And not beg for food.”

By the end of the training, Caleb and Cynda Hyndman, reminded law enforcement and first responders at the training that blind and visually impaired people are people who live their lives like anyone else. Caleb Hyndman is a normal teenager, who also happens to write and present training sessions for a new statewide program.