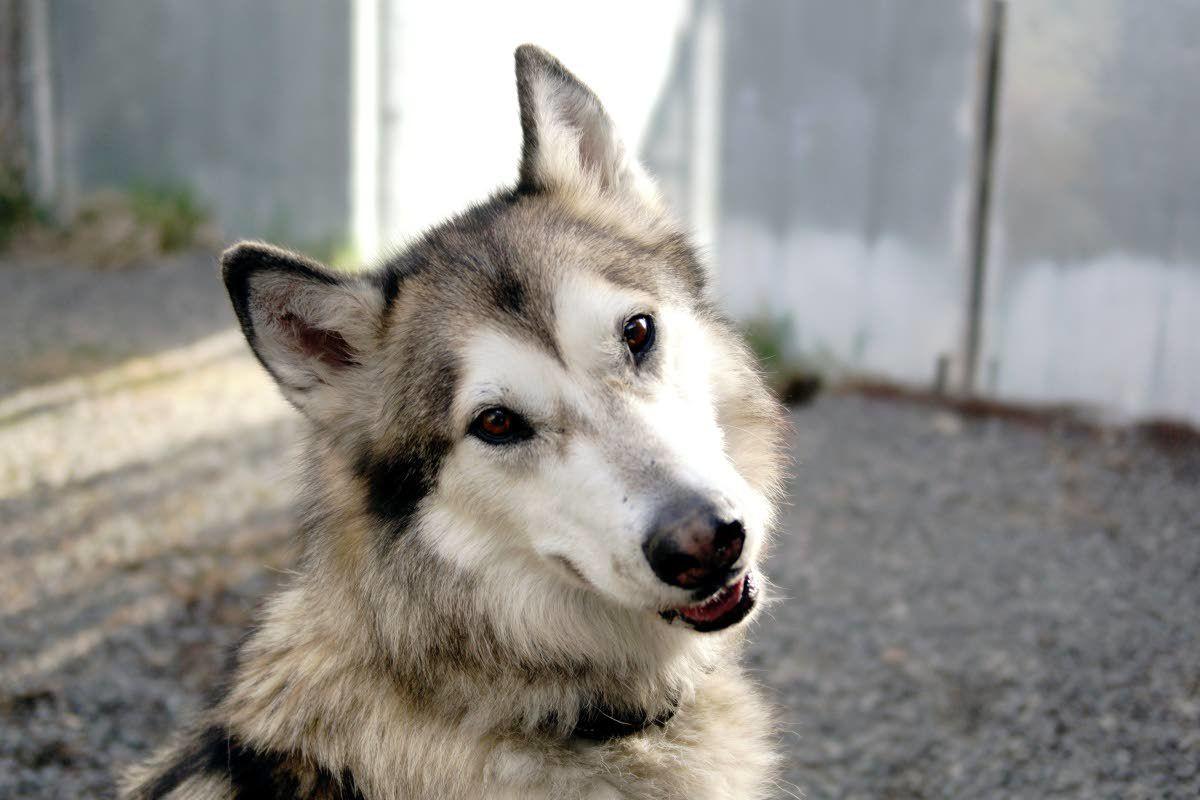 A Siberian husky named Kaya poses for a photo last week at the Humane Society of the Palouse in Moscow. The shelter has halted adoptions during the COVID-19 stay-at-home order, but donations are needed and accepted there and at other area animal-rescue organizations. 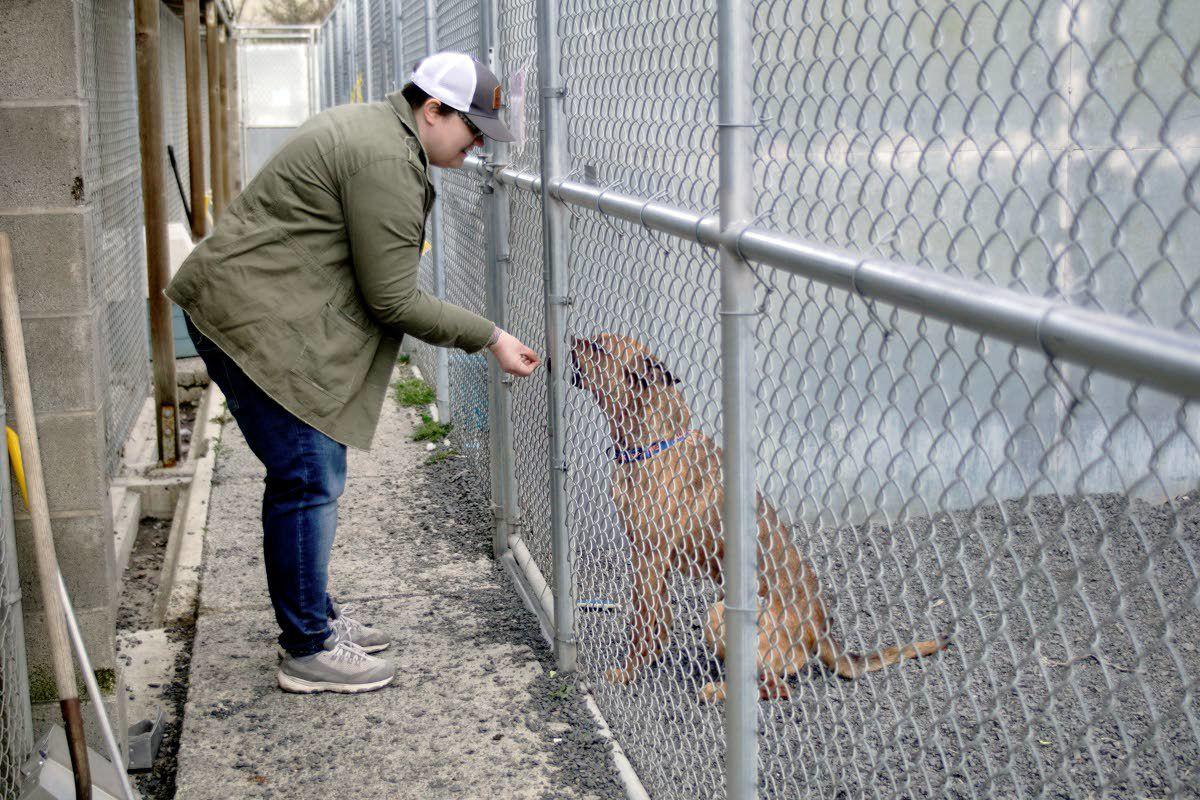 A dog named Lady gets a treat from Humane Society of the Palouse Executive Director Tara Wimer. Wimer’s shelter isn’t adopting out pets during the stay-home order but is seeking donations to help keep the nonprofit organization operating. 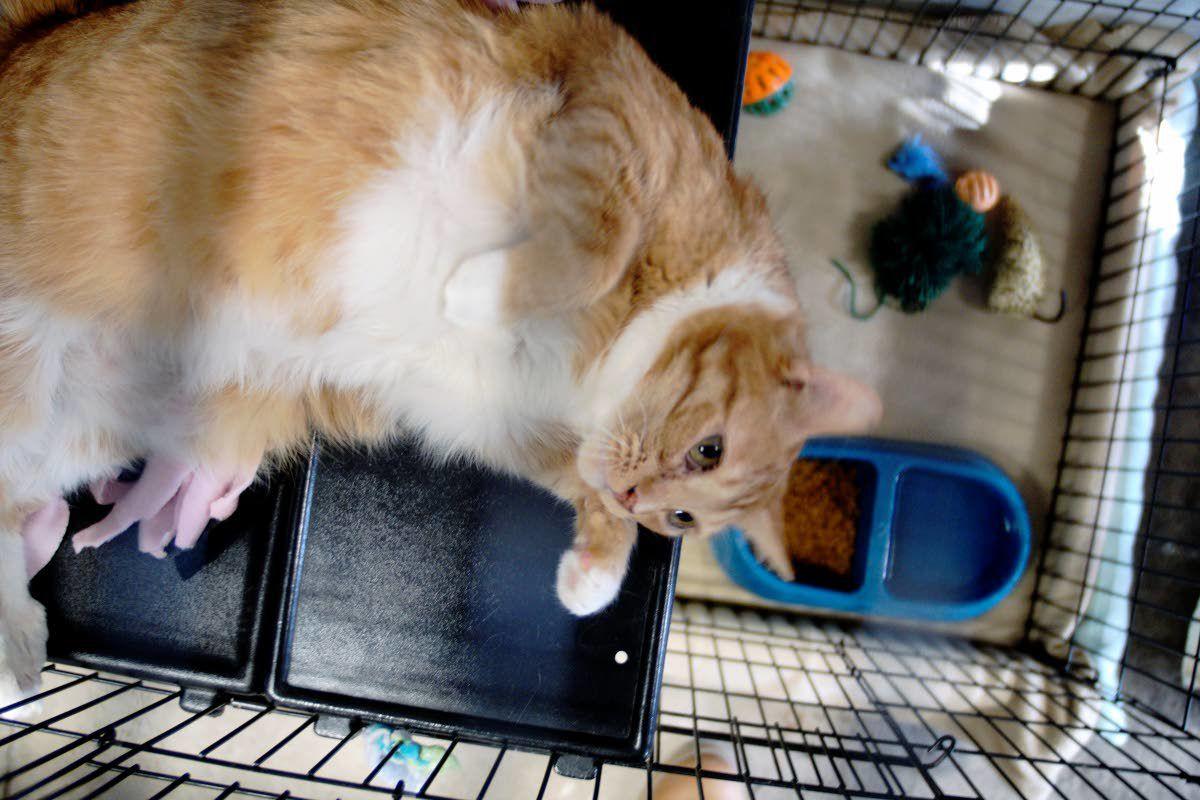 Beethoven, a deaf orange tabby, relaxes in his kennel last week at the Humane Society of the Palouse animal shelter in Moscow.

A Siberian husky named Kaya poses for a photo last week at the Humane Society of the Palouse in Moscow. The shelter has halted adoptions during the COVID-19 stay-at-home order, but donations are needed and accepted there and at other area animal-rescue organizations.

A dog named Lady gets a treat from Humane Society of the Palouse Executive Director Tara Wimer. Wimer’s shelter isn’t adopting out pets during the stay-home order but is seeking donations to help keep the nonprofit organization operating.

Beethoven, a deaf orange tabby, relaxes in his kennel last week at the Humane Society of the Palouse animal shelter in Moscow.

When the coronavirus pandemic derailed two fundraisers she’d planned, the executive director of Moscow’s Humane Society of the Palouse came up with a creative solution.

Tara Wimer called it a “stay at home to help homeless pets” fundraiser.

“We’re inviting you — for your nonattendance — to stay home and help us still pay our bills,” Wimer said.

The COVID-19 pandemic and resulting stay-at-home orders from the governors of Washington and Idaho are having an economic impact on local animal-welfare organizations. Wimer projected losses of $3,000-5,000 from not being able to hold fundraisers in March and April, and she’s not the only one worried about finances.

“I don’t know what percentage (of our annual fundraising that provides), but it’s our second-largest fundraiser,” said Benson, whose organization doesn’t have a physical address.

Ashley Phelps, director of shelter operations for the Whitman County Humane Society in Pullman, said not offering adoptions during her state’s stay-at-home order has so far cost her shelter $7,000. Phelps said her shelter may move to doing adoptions by appointment, if approval is given by the city. Those interested in updates can check the shelter’s website.

The Lewis Clark Animal Shelter in Lewiston and Helping Hands Animal Rescue are both offering adoptions by appointment.

Wimer’s shelter in Moscow isn’t doing adoptions for the duration of the stay-at-home order, which she said has been hard for her.

“Because that’s the highlight of our days,” she said. “To see this animal who blossomed with us wait longer to find its perfect home, it’s hard — because that’s why we’re there.”

The hardest part of the current situation for Donna Duffau, director of operations for the Lewis Clark Animal Shelter, has been having to lay off two employees and limiting hours for the rest.

“I care about these kids working for me,” Duffau said. “They are very compassionate to the animals and to the people who come out here, and it’s hard to do, to cut their hours. I know they need that paycheck.”

WHAT LOCAL SHELTERS ARE — AND ARE NOT — OFFERING

All area shelters are still taking in strays, though they’re encouraging people to call the police to corral and deliver those animals, rather than doing so themselves.

Area shelters are also offering animal owners free pet food if they need it, so long as they call or email ahead of time to schedule an appointment (and to see if any is available).

No area shelters are accepting surrendered animals or offering traditional services like microchipping, giving vaccinations and spaying or neutering. Not spaying and neutering poses a particular challenge during what’s colloquially known as “kitten season.”

“We’re going to be overwhelmed with kittens,” Benson said.

HOW THE COMMUNITY CAN HELP

Representatives from local animal-welfare organizations offered several ways people can help their groups during this time:

1) Become a foster parent. Each organization has a link on its website to apply to do this.

“We are fostering, and we are looking for more fosters, because we’re going to have more kittens than in the past,” Duffau said.

While the Humane Society of the Palouse isn’t currently fostering out animals, Wimer still encouraged people to apply to become pet foster parents.

“Once it’s over, we’re going to need a lot of homes lined up for foster kittens,” Wimer said, “so if we can get applications in and get started processing, it’d give us a jump-start for when it’s cleared.”

2) Make pet toys. While none of the local shelters are accepting in-person volunteers, all have encouraged people to make dog or cat toys — and perhaps not just for the animals’ sake.

“(It’s a way to) keep the kiddos busy while they’re home,” said Becky Sturmer, development director for the Lewis Clark Animal Shelter. “Kids can always be making some handmade dog toys, rope toys and cat toys — and we will accept those when we do open up to the public later on.”

3) Make a donation. All of the organizations quoted in this story have donation links on their websites, but they aren’t just accepting money.

Duffau encouraged people to leave monetary donations in a drop box outside her shelter’s building, and to drop off supplies below that, rather than coming in.

4) Call local shelters before coming by. “That way, if you’re looking for a (lost) husky, and we don’t have any huskies, we can tell you that,” Duffau said. “If you know it’s not here, you can avoid coming out.”

5) Buy a gift card from a local business. “Without those businesses, we wouldn’t be able to have fundraisers,” Wimer said, “so we really have to give back to those owners. Especially right now.”

Getting gift cards for first responders would be particularly appropriate at this time, she said, as a way to say thanks.

6) Fight “fake news.” Wimer said she wants to make one thing clear: “We cannot get this virus from (our pets),” she said, “and they cannot get it from us.”

“Dogs and cats cannot get it from you,” Duffau said. “It’s OK if you’re quarantining with your dog. They can’t make you sick, and you can’t make them sick.”

Another myth Duffau has heard is that hand sanitizer can be deadly for pets if they lick it from a person’s hands.

“That is not true,” she said. “First of all, if you don’t rub it in all the way, they won’t even come close, because it’d smell like alcohol.

Human Society of the Palouse: www.humanesocietyofthepalouse.org