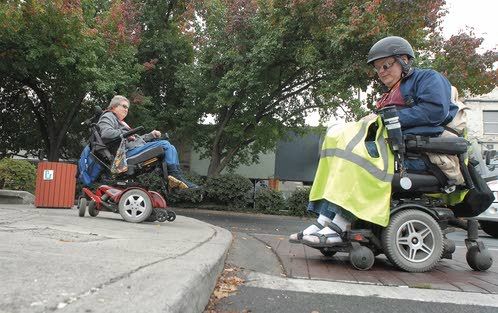 A shallow curb that’s almost invisible to pedestrians becomes an obstacle for a wheelchair. It’s fairly easy for Eric Peterson (right) but potentially dangerous for a taller wheelchair like Janie Harvey’s. 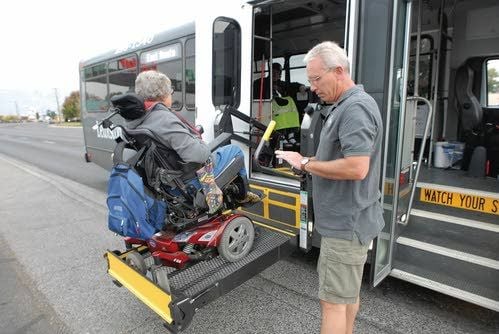 With an assist from Lewiston Transit driver Chad Fenimore, Janie Harvey loads into a well-equipped transit van for a quick trip across town. 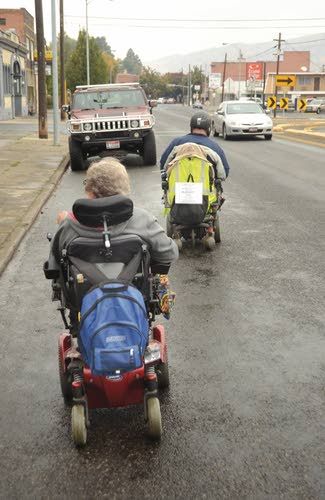 The 1100 block of Lewiston’s Main Street has an ADA sidewalk cut on the east end of the block but not the west end, requiring a trip down the street, against traffic. 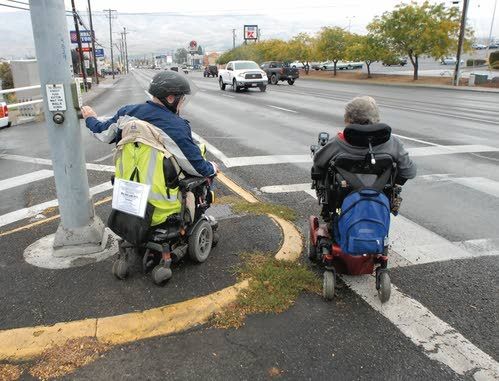 Crossing 21st Street at 19th Avenue in Lewiston is a challenge in a wheelchair. The crossing button requires running up a curb, possible with some chairs but not others. 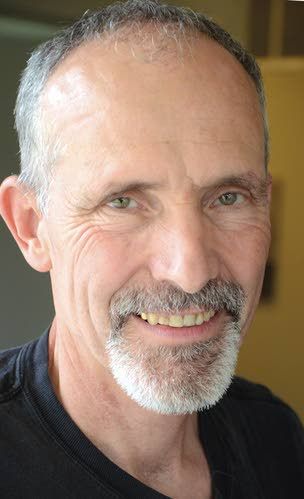 A shallow curb that’s almost invisible to pedestrians becomes an obstacle for a wheelchair. It’s fairly easy for Eric Peterson (right) but potentially dangerous for a taller wheelchair like Janie Harvey’s.

With an assist from Lewiston Transit driver Chad Fenimore, Janie Harvey loads into a well-equipped transit van for a quick trip across town.

The 1100 block of Lewiston’s Main Street has an ADA sidewalk cut on the east end of the block but not the west end, requiring a trip down the street, against traffic.

Crossing 21st Street at 19th Avenue in Lewiston is a challenge in a wheelchair. The crossing button requires running up a curb, possible with some chairs but not others.

That's the way community members describe the process to bring the Quad Cities into compliance with the Americans with Disabilities Act.

The legislation, passed 25 years ago, prohibits discrimination based on disabilities and calls for sidewalks, public transport, buildings and employment opportunities to be readily accessible by all.

Community leaders in Lewiston, Clarkston, Moscow and Pullman agree the cities have made progress, but the law's landmark anniversary came and went in July, and none of the cities is fully accessible.

"We still have a long ways to go," said Mark Leeper, president of the nonprofit Disability Action Center in Moscow.

When the ADA was approved by Congress in 1990, the Quad Cities quickly pursued compliance efforts.

Lewiston formed a Persons with Disabilities Advisory Commission in 1991, which was tasked with guiding local government toward physical accessibility. Lewiston and Pullman saw transition plans completed in 1992 - documents establishing timelines and costs for making public buildings, rights of way and transport readily accessible.

But attitudes toward the ADA in the region were a mixed bag. Eric Peterson, chairman of Lewiston's new Disability Advisory Commission, noted there were general gripes about unfunded mandates, but Leeper said there was "a lot of excitement" in the advocacy community.

Leeper said the city of Moscow examined its structures "with some seriousness" and renovated the old post office and city hall. Jim Bennett, Lewiston's city manager, said one of the first projects was adding ramps to city hall.

And in Clarkston, "there are very few places that I go anymore that, for example, don't have handicap-accessible bathrooms," said Paul Horne, community support coordinator at Asotin County Community Living. "Even aisles are wider than they used to be."

But after those initial efforts in the four communities, the excitement dissipated.

"I think for a long time, there weren't a lot of new changes, new courses of the plan that were completed as far as physical changes," Bennett said.

ADA transition plans are required for any city with 50 or more employees, but in three of the Quad Cities, they're either outdated or nonexistent.

"What we're planning to do, of course, is to update this plan because after 20-plus years, some of those things have been accomplished, others still need to be accomplished or have changed in the scope of what needs to be done," Bennett said.

Lewiston is in the early stages of creating a new transition plan, recently appointing Executive Assistant Judy Smith to serve as ADA coordinator - a point-person who oversees compliance projects and responds to complaints. The city hopes to complete the plan by early next year.

In Clarkston, there's no ADA transition plan for upgrading sidewalks and structures. In 2010, the city passed a resolution stating policies and procedures for ADA compliance, and appointed Clerk-Treasurer Vickie Storey as ADA coordinator.

To complete physical access projects, the public works department has a planning program and submits project proposals to the state.

Pullman is working on a new ADA transition plan that could be ready for public review by the first of the year, Workman said. The main areas of concern will be sidewalks and curb ramps, buildings and parks.

"All of these will be ongoing and probably longer-term projects because the scope is enormous," Workman said.

Moscow is the sole locale that's utilizing a current transition plan, finalized in May 2014. Its priorities are curb ramps, sidewalks and signalized intersections.

"It's a huge undertaking," said Alisa Anderson, the city's grants manager. "Pretty much we just have to work at it as we can each year, based on the funding that we have."

The estimated cost of all the projects in the plan comes to about $24 million.

Peterson, who uses a wheelchair, deals with obstacles every day he decides to leave home.

Traversing sidewalks along Lewiston's 21st Street often means entering the roadway, either because a driveway is too steep or there's no curb cut to get him to the sidewalk. And a number of streets in the Lewiston Orchards don't have any sidewalks.

He said it's one of the main reasons a lot of people with disabilities aren't seen out and about.

"Curb cuts, driveway slopes, everything out there - they're deadly," Peterson said, noting a person in a wheelchair could tip over if they hit a curb that's too high or get hit by a car if they're navigating the streets.

The problem exists to some degree in each of the Quad Cities. In Clarkston, Martin referenced a recent project along 13th Street from Bridge Street to Highland Avenue, where every curb ramp set there in 2009 had to be replaced because of updates to compliance regulations.

"I hate to admit it but the ADA requirements are very difficult to meet," Martin said.

In Pullman, a survey of the city's approximately 1,000 curb ramps completed about four years ago showed that only about five of those ramps were ADA compliant.

One area where the Quad Cities have excelled is in making regular bus and Dial-a-Ride services accessible. But it's the services themselves that community members want improved.

"It's great we have access, but transportation is entirely inadequate in the public sector," Leeper said.

Moscow's fixed-route services operate from 6:40 a.m. to 6 p.m. Monday through Friday, but just across the state line, Pullman's service extends until midnight when Washington State University classes are in session and always offers Saturday service.

The bus service in the Lewiston-Clarkston Valley is about the same as Moscow's.

"I would love to see the bus service work seven days a week," said Nick Fiore, employment services coordinator at Asotin County Community Services. "We have a lot of people that use it. They want bus passes. It's a great way to get independence."

Dial-a-Ride, the more personalized service option, comes with some inconveniences, Peterson said. The service must be scheduled 24 hours in advance and patrons must block out an hour for pick up.

Buildings and other public spaces

Public buildings remain in relatively good standing, thanks in part to the improvements in physical accessibility that came when the ADA was first passed.

What the Quad Cities are looking at now is continued maintenance and more minor improvements.

Pullman is awaiting the completion of an evaluation of its public buildings, but Workman is "sure every public building is going to have some ADA deficiencies."

Bennett said the same is true of Lewiston's buildings. City hall and the community development building will need to be re-addressed since both are historic structures constructed before the ADA.

Lewiston's neighbor seems to be sitting pretty, with the remodel of the Asotin County Courthouse to construct an elevator in 2002 and Clarkston's move into a compliant city hall about three years ago.

In Moscow, Leeper noted, gravel is too deep at the Latah County Fairgrounds to allow accessibility by those who use wheelchairs or walkers.

Parks are similarly a concern in the Quad Cities. Bennett said Lewiston plans to include parks in its long-term ADA transition plan, addressing issues like pathways, accessible bathrooms and parking designations.

Pullman is looking to create an inclusive park that people with and without disabilities can enjoy. The site the city has chosen is Mary's Park, an undeveloped parcel of land donated to the city in 2010.

"(Parks are) kind of a high priority for us, just because the public is invited into those for relaxation and recreation purposes," Workman said.

Pullman is seeking public input on Mary's Park through Friday, which can be submitted to recreation@pullman-wa.gov.

What the southeastern corner of Washington gets right, in contrast to its Idaho neighbors, is equal employment opportunities.

Asotin County Community Services exists for the purpose of making jobs available to people with developmental disabilities. The organization has contracted with the federal government since the 1970s and also works to place individuals in jobs in the community.

She recognizes concerns that ADA compliance costs money, "but look at what happens if you don't have it, how much that cost is - not only productive people but people going to emergency rooms, getting ill and hurt because they're trying to (navigate) their wheelchair across town."

Pullman established a Human Rights Commission to handle ADA complaints, but City Councilor Nathan Weller, who sits on the commission, said they've received none so far.

In Moscow and Lewiston, advocates agree little has been done to employ people with disabilities.

"How many persons with disabilities do you see working when you go anywhere?" Peterson asked. "That hasn't worked."

Advocacy for the ADA and what is needed to reach compliance is a high priority for community members in the Quad Cities.

Lewiston's new Disability Advisory Commission came into being in November 2014 after the previous group was dissolved in January 2006.

Peterson said members quickly recognized the need to focus on education and awareness.

"If you don't squeak, it doesn't get greased," Peterson said.

In Moscow, the Disability Action Center has rolled out blue-path.org, a website that highlights physically accessible businesses there and in communities further west. And Weller wants to see Pullman's Human Rights Commission become more proactive.

Advocates in Clarkston credit teachers in the 1990s for a shift in attitudes that has resulted in a more welcoming culture.

"I just see a whole lot more acceptance, at least in our little community," Horne said.