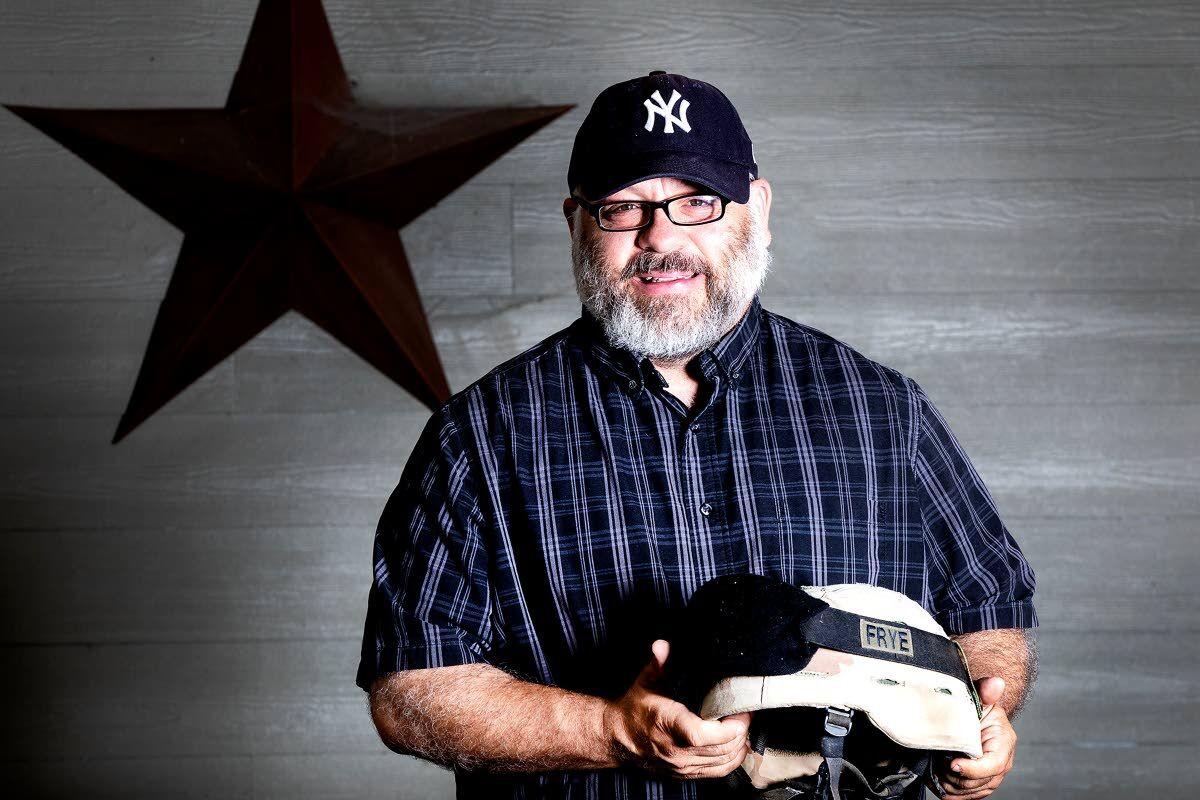 U.S. Army veteran Joseph Frye holds his helmet from the military outside his home in Genesee. 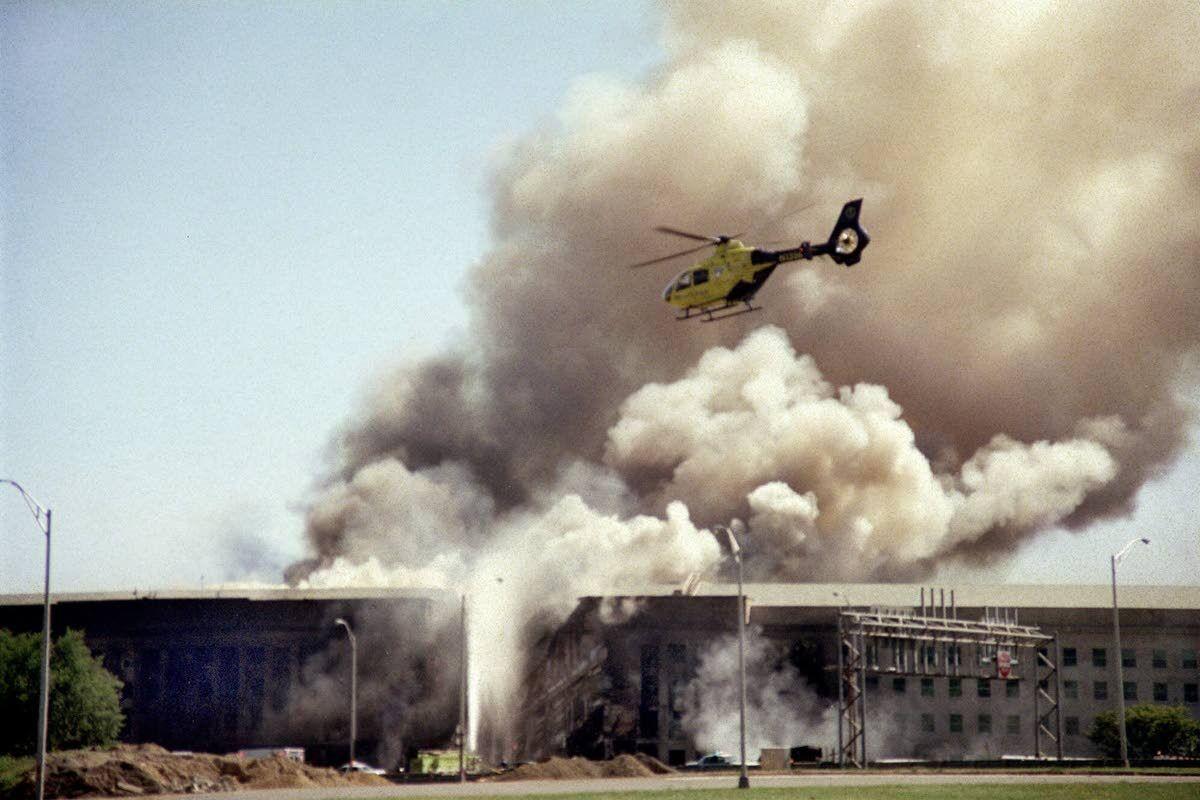 Associated PressIn this photo taken Sept. 11, 2001, a helicopter flies over the Pentagon in Washington, D.C., as smoke billows over the building.

U.S. Army veteran Joseph Frye holds his helmet from the military outside his home in Genesee.

Associated PressIn this photo taken Sept. 11, 2001, a helicopter flies over the Pentagon in Washington, D.C., as smoke billows over the building.

Joseph Frye was on his way to work on Sept. 11, 2001, at the ammunition supply point at the Orchards Training Center near Boise when he heard about the first attack on the Twin Towers in New York City.

“Like everybody else, when I heard about the first tower I thought it was pilot error; maybe fog or an accident,” Frye, 49, said. He’d been in the U.S. Army nearly a decade at that point, having joined immediately after high school during Operation Desert Storm. He was aware of the potential for terrorist attacks — mainly because of the first bombing of the World Trade Center in 1993.

When the second plane hit the second tower, Frye said, “I knew exactly what it was and who it was. I knew it was terrorists.”

A short time later news filtered through of a third plane, American Airlines Flight 77, hitting the western side of the Pentagon, followed by a fourth hijacked plane, United Airlines Flight 93, crashing into a field in rural Pennsylvania after its crew and passengers fought back against the terrorists.

Suddenly. the pandemonium broke out at Frye’s duty station.

“It was a pretty coordinated attack, so we didn’t know what was going to happen,” he said.

Ordinarily it would take personnel arriving at the ammunition supply point five minutes to get through the security checkpoint. “But that morning it took two or three hours just to get onto post. Everybody was armed. They were searching everything,” Frye said.

Bomb-sniffing dogs were brought onto the scene. Armed military police stood guard while others checked underneath vehicles with mirrors, looking for explosives.

Frye and his team were four or five hours late relieving the previous shift. The ammunition supply point where he worked is where all of the ammunition for the state of Idaho is stored, including rockets and artillery shells — a “pretty high security” area, he said.

“When I made it out to the ammunition supply point out in the desert we had live ammunition given to us. We thought other installations could be attacked.

“The days just sort of melted together. We went from working eight hours a day to 16, 17 hours. It was just crazy. Nobody knew what was going on. We didn’t know what to expect or what was going to happen.

“The week or so afterwards we were on high alert and I was just guarding the ammunition. We were coming up with contingency plans. It was absolute chaos.”

Beginning in October, Frye was one of 20 soldiers assigned to guard the Boise airport. Soldiers assisted the federal Transportation Security Administration as airport security was intensified. Barricades were installed and passengers were scrutinized to a level that had never been seen before.

Frye said he eventually came to believe that “if anything were to happen in Idaho, I thought it would have already happened. I thought Idaho was a low priority target — not like Virginia or California or Seattle. I did not feel that Boise was a target.

In 2004, Frye was shipped to Iraq where he worked in logistics helping with supplies and also assisting the Judge Advocate General’s Corps, which provides legal services to all members of the military.

In that role, Frye joined service members who communicated with the people of Iraq and assisted with many humanitarian needs, such as housing. Duty assignments, he said, were often fluid.

“We were a heavy armored brigade but we were used in stability operations,” Frye said. “I was involved in a lot of convoys to Baghdad and back, taking vehicles or personnel up where the Kurds (an Iraqi ethnic group) were. Nobody really did their real job unless you were a medic.”

He also helped out when the Iraqis held their first free election in January 2005 following the fall of Saddam Hussein.

Frye said most of the Iraqi people he met were friendly and grateful for the American support. But he did witness the ethnic tensions between the Sunnis and Shias and anti-American sentiment from some of the religious groups.

One of the most memorable experiences, he said, was being able to view some of the ancient artifacts of Babylon and relate some of that to stories he knew about in the Bible.

Finally, after returning home in 2005, he met his wife, and married and moved to Genesee, where he lives now. He retired in 2019 after “27 years, 11 months and 1 day,” in the Army. He has worked for Schweitzer Engineering Laboratories since but is taking a few months off for knee surgery.

Public perception of military personnel following 9/11, he said, was vastly different from what his father experienced during the Vietnam war.

“People would see you in uniform and they would ask you all the time about it,” he said. “Even a year afterward it was still a big deal. Patriotism was really high.

“In Idaho, people have never had a bad regard for the military. I have never had anybody look down on me or talk bad to me and tens of thousands of times I’ve had people shake my hand and thank me for my service. It was not like my dad, who did two tours in Vietnam. We came back to parades and people were happy to see us. The way we were treated was really good.”