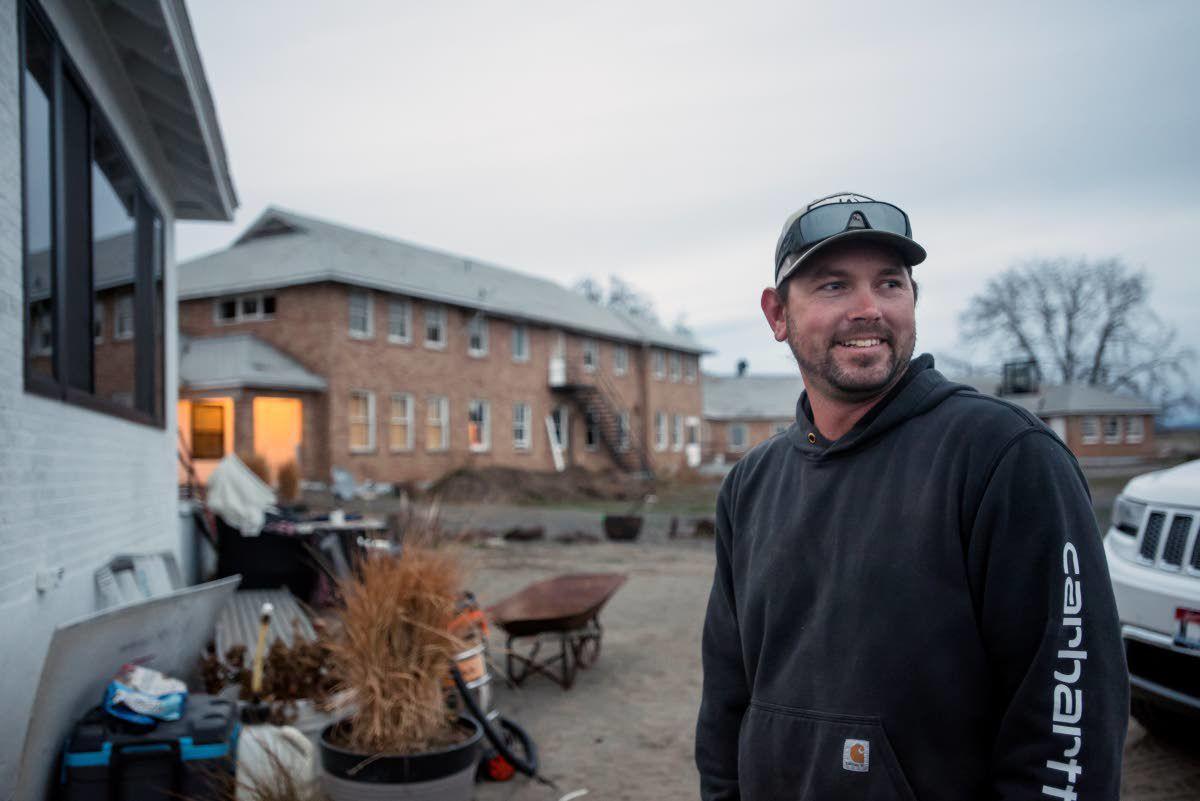 AJ George talks about his renovation plans for the rest of his house, the former Neva’s Shelter Care, in the Lewiston Orchards on Wednesday. 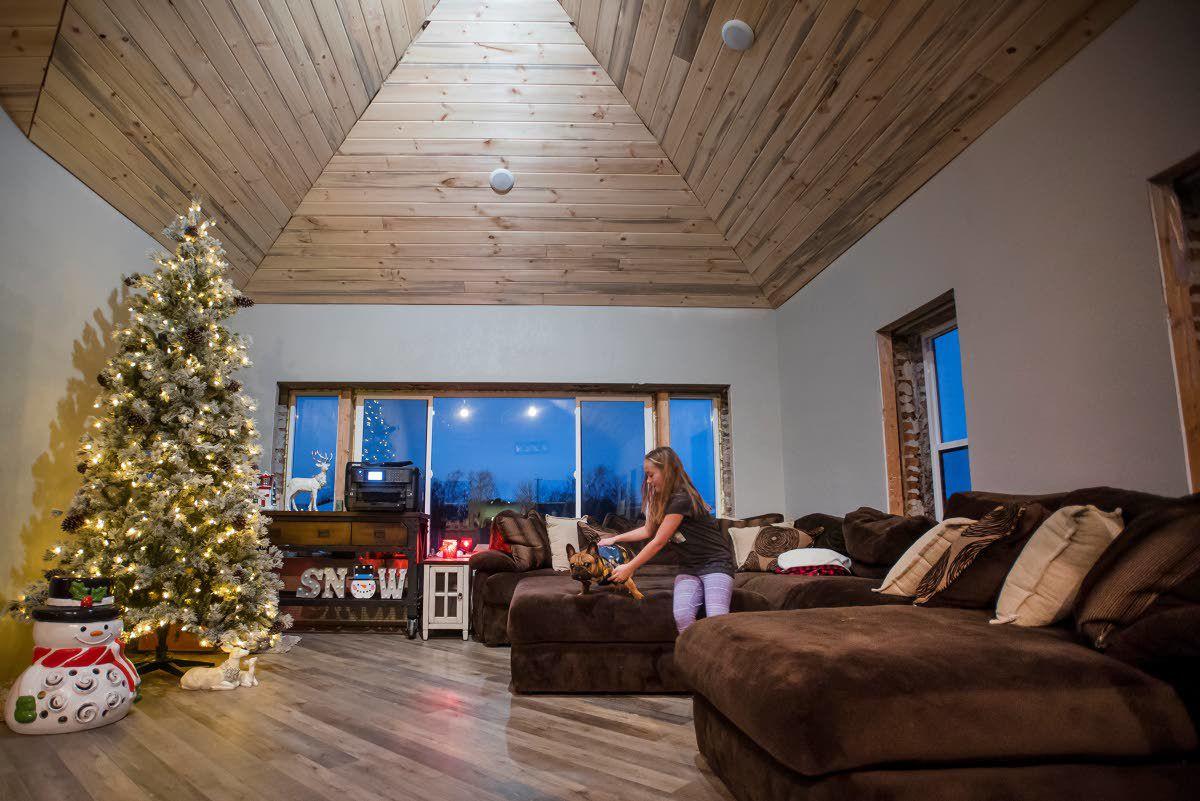 Soleil George plays with her dog, Boss, in the living room of her family’s new home, the former Neva’s Shelter Care, in the Lewiston Orchards on Wednesday. 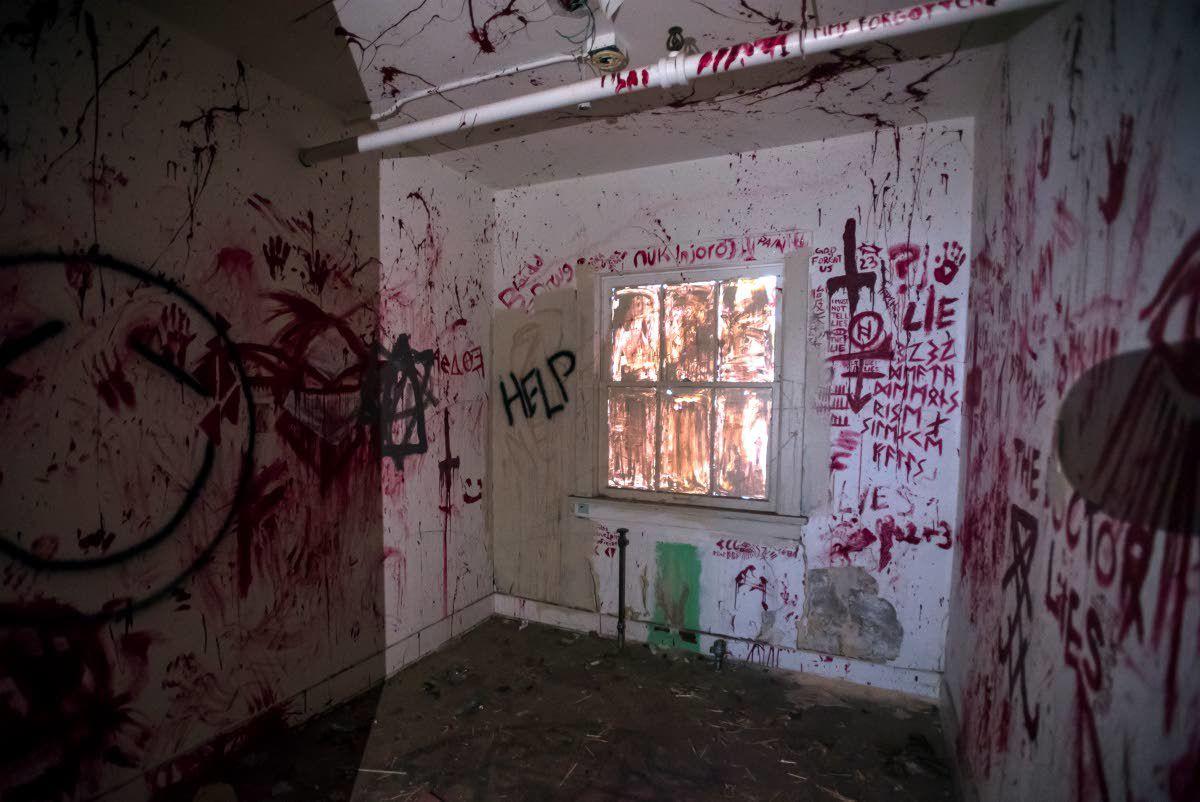 Remnants from a haunted house remain on the walls in a room in the yet-to-be renovated two-thirds of the former Neva's Shelter Care in the Lewiston Orchards on Wednesday. 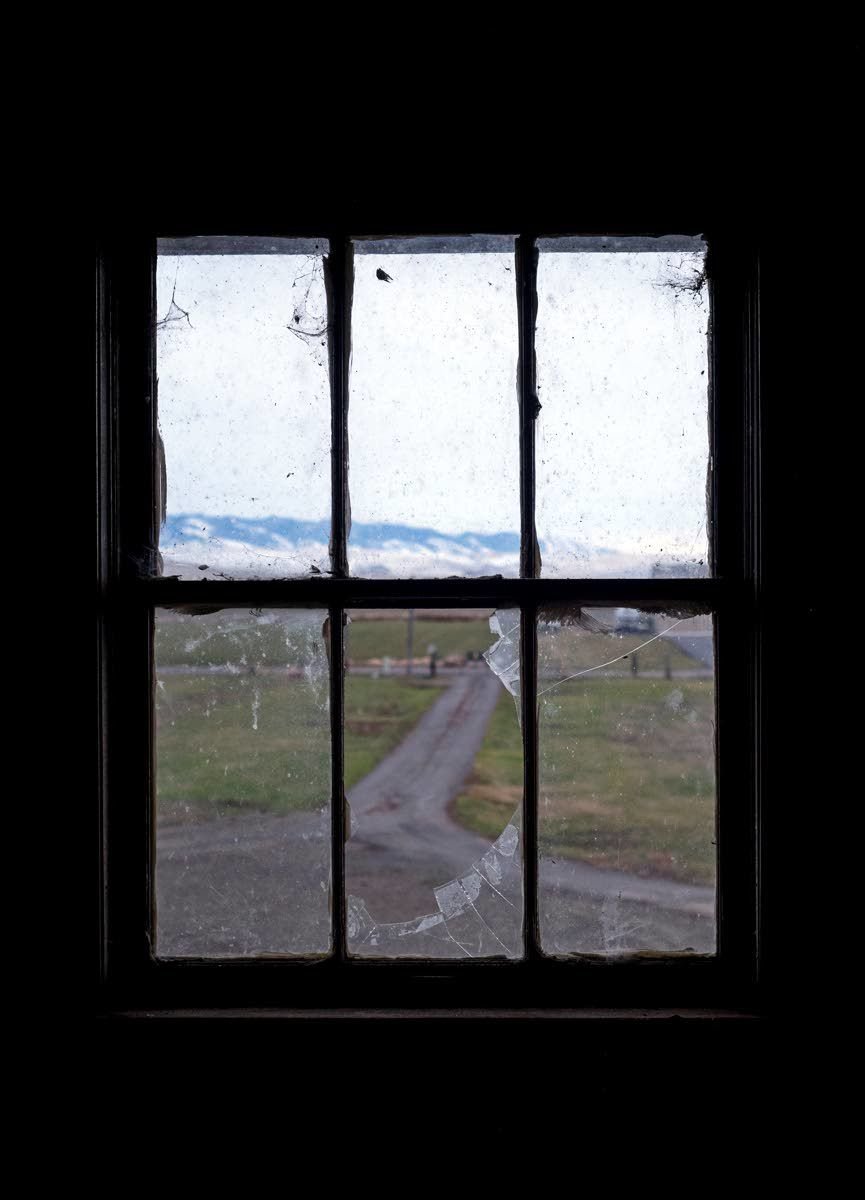 Mountains loom in the distance beyond the end of the driveway of the Georges' new home, as seen through broken glass in the yet-to-be renovated two-thirds of the former Neva's Shelter Care in the Lewiston Orchards on Wednesday.

AJ George talks about his renovation plans for the rest of his house, the former Neva’s Shelter Care, in the Lewiston Orchards on Wednesday.

Soleil George plays with her dog, Boss, in the living room of her family’s new home, the former Neva’s Shelter Care, in the Lewiston Orchards on Wednesday.

Remnants from a haunted house remain on the walls in a room in the yet-to-be renovated two-thirds of the former Neva's Shelter Care in the Lewiston Orchards on Wednesday.

Mountains loom in the distance beyond the end of the driveway of the Georges' new home, as seen through broken glass in the yet-to-be renovated two-thirds of the former Neva's Shelter Care in the Lewiston Orchards on Wednesday.

The transition from dump to dream home has finally begun for the old Neva’s Shelter Care building.

“Somebody had to do it and turn it into something,” new owner AJ George said during a recent tour of the Lewiston Orchards landmark where his family now lives. “Everything else has been a failure over the last 20 years.”

Once the Nez Perce County poor farm and then an assisted living facility for several decades, the stout, sprawling brick building on Grelle Avenue has changed hands a few times since the county unloaded it in 2003. It had sat vacant for years, and a series of owners and prospective buyers had various ideas for a rehab, including a private residence, apartments, an upscale hotel and restaurant, a winery with an event center and a doggy daycare.

It’s creepiness factor increased along with its dilapidation over the years, and it even did a stint as a haunted house during the Halloween seasons of 2012 and 2013.

George, 33, and his wife, Jamie George, 32, joined the ranks of those who had big dreams for the property when they were high school sweethearts. They would often drive by on trips out to Waha and imagined turning it into their own home.

“Ever since we were teenagers, we’ve always had our eyes on this place,” Jamie said, standing in her shiny new kitchen.

But year after year, they saw nothing much happen to the property. They got married, started a family and founded their general contracting company, A&J Construction. Then it went up for sale in February and they pounced. The previous owner accepted their offer of $235,000 the second day it was on the market.

“I don’t think we hesitated at all,” AJ said.

The building sits on a 5.5-acre lot in a rural neighborhood that has become a popular area for large, new single-family homes and ranchettes. Considering those factors, AJ figured they got a screaming deal.

“I could’ve torn down the building and made money on the land,” he said.

But that wasn’t even remotely the plan. The Georges and some helpers got to work on the west wing of the building so the family would have a space to live while they tackle the rest of the mammoth project. They uncovered the nasty surprises homeowners usually run into when doing demolition work on an old building, like the mountain of raccoon poop that crashed down with the old ceiling where the living room now sits.

But after about two months of working in their spare time, AJ, Jamie, 9-year-old daughter Soleil and their French bulldog, Boss, moved out of their camper behind the building and into the transformed 1,400-square-foot west wing space a month ago. The space features all-new windows, a vaulted ceiling, marble countertops in the kitchen and glistening stainless steel appliances. It’s warmth was accentuated by a recently erected Christmas tree.

The entire structure is a whopping 17,000 square feet, but AJ estimated that he could have it completely renovated in a couple of years.

Vagrants and vandals that had taken to hurling rocks through the building’s windows and otherwise abusing the property during its years of vacancy haven’t quite gotten used to the new occupants, AJ said. Looky-loos have also been an issue, with curious people welcoming themselves onto the property to see what’s been going on, sometimes asking for a tour.

One especially rude interloper even sliced through the safety net around Soleil’s trampoline. AJ made quick work of the repair with some rainbow-colored zip ties.

“We figure if people do break in, we’ll scare the heck out of them,” AJ added, grinning at the prospect of surprising intruders who think the structure is still abandoned.

But the family has since taken measures to prevent further nuisances. A motorized gate at the end of the driveway now keeps out any uninvited vehicles, while security cameras monitor the premises day and night.

The ghosts that have been rumored to haunt the building haven’t yet been a problem. In fact, the Georges — including brave Soleil — scoff at the notion.

“People always said there was a grumpy old ghost of a man down here,” Jamie said while showing the old basement. She has met nurses from the old care home who shared heartwarming tales of working with its former residents. “I like stories like that, the good stuff, instead of hearing it’s haunted and there’s ghosts and stuff like that.”

AJ stuffed his hands in his pockets while standing outside earlier this week, the cold afternoon sun quickly setting while a strong, steady wind whipped across his land.

“I can see what it’s going to look like,” he said, pondering his new home. “But a lot of people don’t see my vision. You’ve got to have one hell of an imagination to see what it can be.”