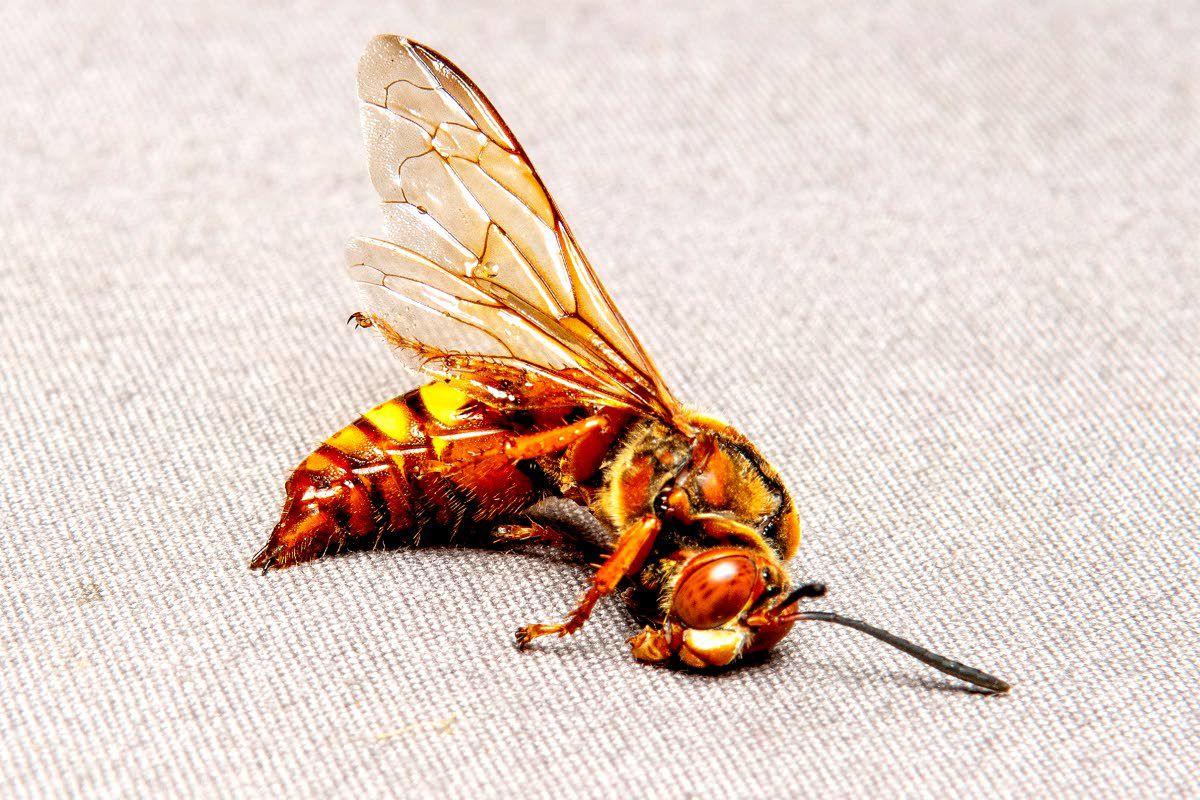 This western cicada killer was recently found in Lewiston. The people who found it thought it could have been an Asian giant hornet, but Washington State University entomologists identified it otherwise. 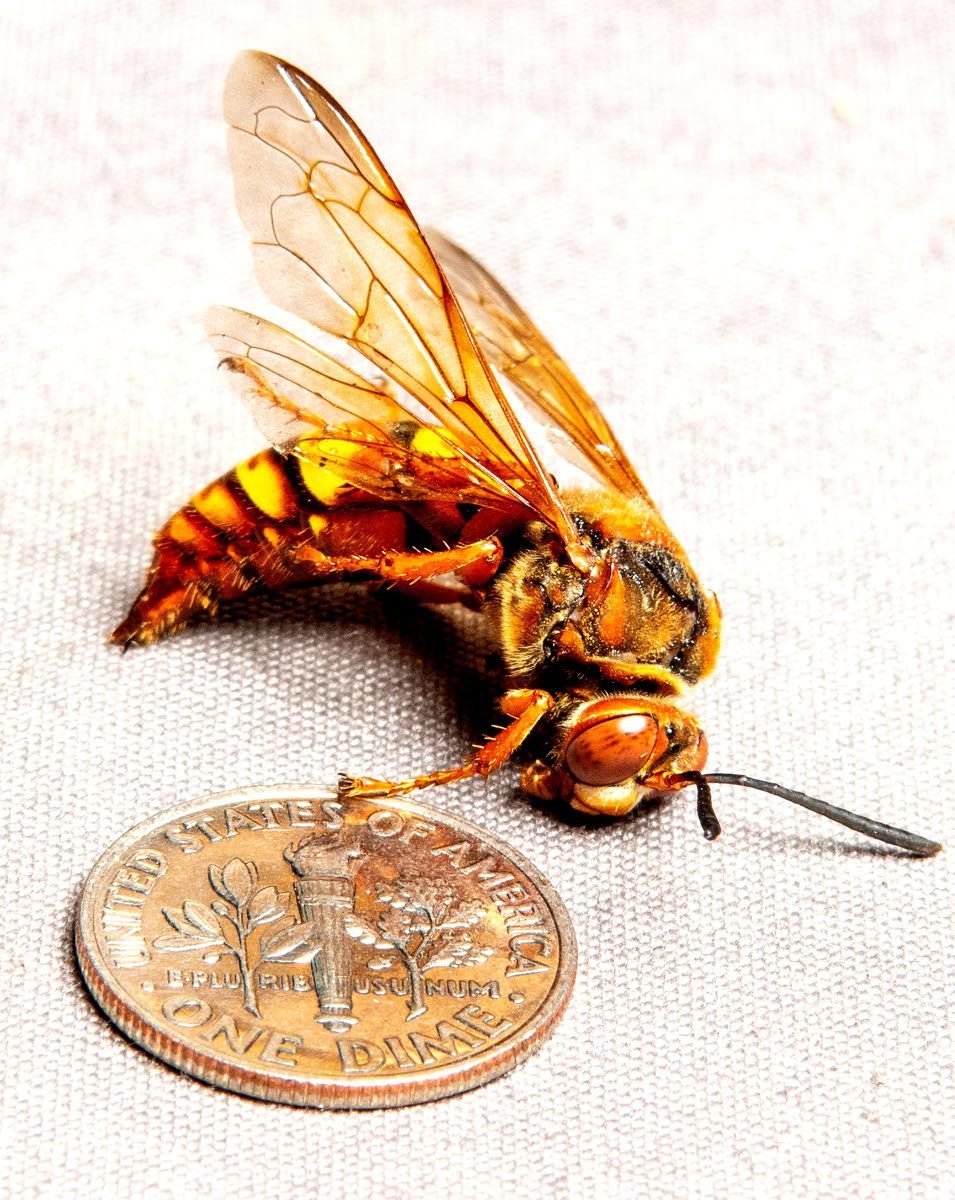 A dead western cicada killer is shown next to a dime for size comparison. The Washington Department of Agriculture has received several tips from people who thought they’d seen Asian giant hornets, or “murder hornets,” but who actually had found cicada killers, yellow jackets or bald-faced hornets.

This western cicada killer was recently found in Lewiston. The people who found it thought it could have been an Asian giant hornet, but Washington State University entomologists identified it otherwise.

A dead western cicada killer is shown next to a dime for size comparison. The Washington Department of Agriculture has received several tips from people who thought they’d seen Asian giant hornets, or “murder hornets,” but who actually had found cicada killers, yellow jackets or bald-faced hornets.

Josh Martin was sitting by the swimming pool at the Lewiston Golf and Country Club last week watching his children play when he noticed an insect he’d never seen before.

“The thing was flying real close to the ground next to me,” Martin said. “I just kind of stuck my foot out and gave it a little tap to stun it so I could look at it closer.”

The insect was large, a orange-yellowish color with a fierce-looking stinger. Martin, of Lewiston, had read about the Asian giant hornets — also sometimes called “murder hornets” — that have been spotted in western Washington and wondered whether the insect he’d caught was one of those.

“I’ve never seen a bee that big before,” he said.

“We found it by Jenifer Middle School on the highway,” she said. Her family took it to the U.S. Department of Agriculture building and she posted on social media: “We found a killer hornet.”

Although there have been two Asian giant hornets reported in western Washington this year, “it’s highly unlikely that they would see one (in Idaho) — at least at this point,” said Karla Salp, public engagement specialist with the Washington agriculture department.

“They’re not dangerous, but I wouldn’t want to get stung by one,” Lawrence said.

Although sightings of the Asian giant hornet are rare, the agriculture department is asking people to keep their eyes open and report it if they think they see one.

Justin Bush, executive coordinator of the Washington Invasive Species Council said the first detection of an Asian giant hornet in the United States was made by a member of the public.

“Every other detection since has been made by everyday citizens,” Bush said. “Being aware of new plants and animals or changes in your community, and then letting the experts know if something seems like a problem, can save thousands, if not millions, of dollars in damages.”

The Asian giant hornet, native to Japan where it is sometimes raised for culinary uses, was first reported last season in western Washington and British Columbia.

The hornets, which can devastate honeybee colonies in a matter of hours, have been spotted in two different cities in Washington this year, even though they are not expected to be out in larger numbers until later this month or August. That’s when worker hornets become active and queens stop leaving the nests.

Traps consisting of pulp-free orange juice and rice wine have been set out in strategic locations in the hopes of trapping the worker hornets. Salp said the sugar in the orange juice attracts the hornets while the alcohol deters bees.

“They are putting traps up in two areas (in Whatcom County),” she said, estimating about 1,700 traps in all will be distributed in the areas where the hornets have been spotted.

She added, however, that it’s not advisable to put up similar traps here.

“I wouldn’t encourage that in Idaho, because the Asian giant hornet is not likely to be in Idaho, and it’s not a specific trap, so it will trap things like other types of wasps, flies, hornets and even slugs. The probability of Asian giant hornets being in Idaho is extremely low at this point.”

Lawrence said WSU is preparing an update of the Asian giant hornet trapping program for beekeepers, based on what is found.

Salp said if worker hornets are discovered, more live traps will be set in that area. Trappers will then code the hornets and track them back to their original nest, which would then be eradicated. Salp said that process will be carried out by experts and shouldn’t be attempted by members of the public.

Reports may be made using the Washington Department of Agriculture’s Hornet Watch Report Form, the WA Invasives reporting app or on the Washington Invasive Species Council’s website.

Do you think Joe Biden made a good choice in picking Kamala Harris as his running mate?