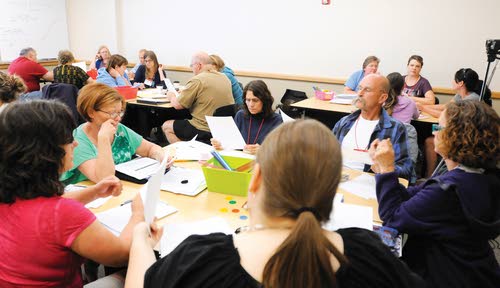 Teachers from around the region go over papers Monday as part of a program to teach educators new ways to learn math. The program continues this week at the University of Idaho. 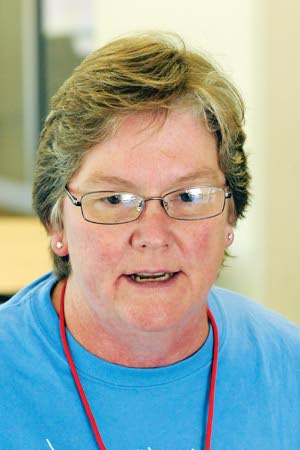 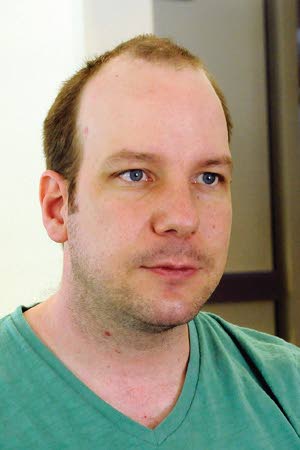 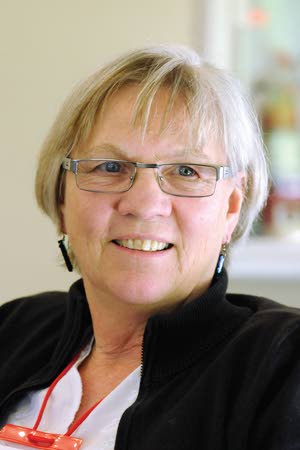 MOSCOW - Mathematics once was Kathy Prummer's weakest subject, but a new approach - aligned with the Common Core State Standards - has made a math teacher out of her.

Prummer is among a group of teachers from throughout the region gathered at the University of Idaho for two and a half weeks of "summer school."

The educators are learning everything they can about new approaches to math education so they can take the concepts back and share them with other teachers in their home districts.

In Prummer's case, a newfound proclivity for the subject led her to move from fifth-grade classroom teacher to seventh-grade math teacher in the Lake Pend Oreille School District.

"It really changed my life," she said.

A partnership between UI, Washington State University and many rural northern Idaho and eastern Washington school districts, the program includes teachers from districts such as Moscow, Pullman, Clarkston, Culdesac, Kamiah and Orofino and as far away as Bonners Ferry and Bridgeport, Wash.

It consists of three years of on-campus summer workshops, regional meetings during the school year and a commitment by the participating teachers to share their knowledge with educators and administrators in their home districts, WSU math professor Libby Knott explained.

The approach to teaching math the teachers are learning emphasizes reasoning and is designed to help students start with a better foundation and move on to a deeper understanding of the subject, Ely said.

Prummer, who is finishing her third year of summer classes, said she saw improvement in standardized test scores among her students the first year she used the concepts.

This past school year, she said, her district field-tested the new standardized test aligned with the Common Core State Standards recently adopted by both Idaho and Washington. When the tests were over, she said, her students reported feeling confident about how they'd done.

Her district asked her to set aside time to work with kindergarten through sixth-grade teachers last year so they could begin to transition to the math practices she's been learning through the program, Prummer said.

Teachers who see the results of the new approach generally are eager to try it, she said.

"It doesn't matter whether the kids are those kids who struggle, on-level kids, or advanced kids," she said. "The way we teach now makes it so that every single kid can engage with math at their own level and be successful and be really challenged academically."